Thoughts on a busy day in search of Muslim Culture in Manhattan.

It began at 41st street and 7th avenue, as I walked to the 26th Annual Muslim Day Parade (around 11:00 AM). Had to pass through Times Square and came upon ANOTHER street closure for ANOTHER Street Festival. 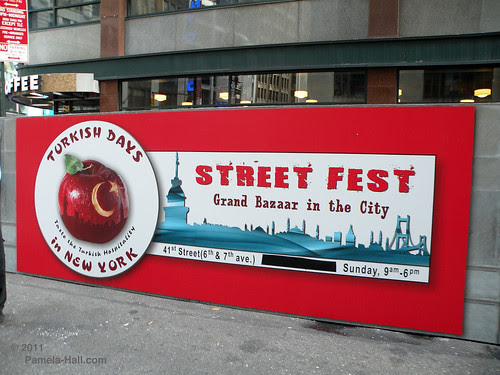 But this one had a unique theme: Turkish Days Street-Fest (Taste the Turkish Hospitality)by celebrating the Great Seljuq Empire

The Empire was a medieval Turko-Persian /Sunni Muslim empire originating from the Qynyq branch of Oghuz Turks from 1037–1194. According to the Seljuqs, they brought to the Muslims "fighting spirit and fanatical aggression".[33]

The Seljuqs also played an important role in the development of the Turko-Persian tradition,[23] even exporting Persian culture to Anatolia.[24][25] The Seljuq rule gave impetus to the Turkification of Iran[26] The Seljuqs Turkified Azerbaijan between the 11th century and 12th century.[27] 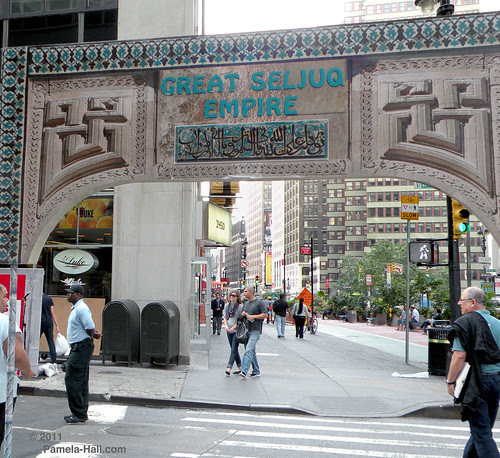 Since I was on my way to observe my 5th (of 26) Annual Muslim Day Parades, at 38th and Madison Ave,  I thought it odd that this Turkish Street Fest was happening on the same day as  Parade. Perhaps all is not well between the Turks and the rest of the Muslim Community. 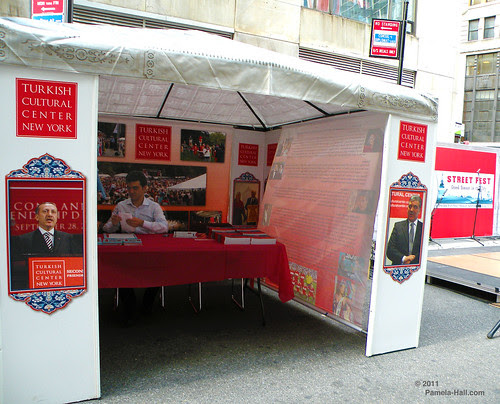 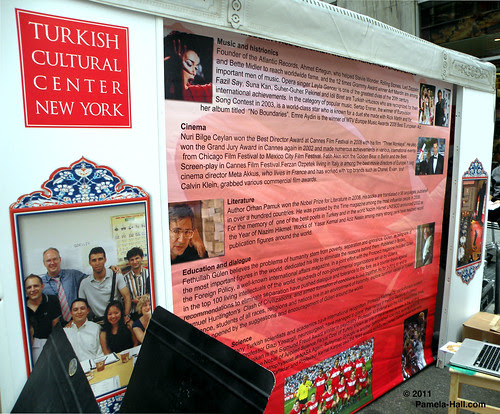 FYI: My post on the Muslim Day Parade (here) revealed a much  smaller parade, attended by a few schools and families who came mostly from Indonesia, the NY Black Muslim Community and the Russian-Muslim countries like Azerbaijan. Other than the obvious  "Flag of Fakestine", the other flags were often a mystery, even to the parade participants. When asked, many were unable to tell me what country the flag they carried was from.

Also, there seemed to be a lot of the main-stream Muslim-players missing (City and National). Low-key for sure but, even so, the families seemed to enjoy themselves; AS did those at the Turkish Days Street Fest. 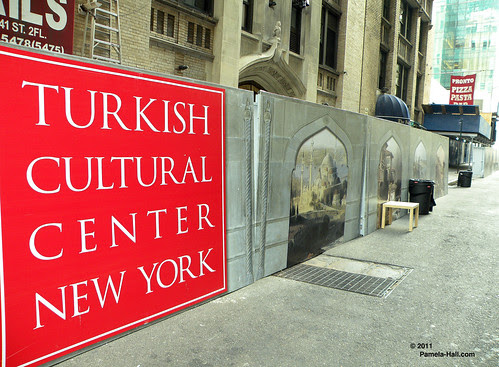 Returning to the Turkish Days Street Fest, it seemed like all the Turks (Muslim at least) were at this Festival. It was nicely done. Refreshing, compared to the usual food-fests that go up and down the avenues of NY. There were costumes and Turks with smiles, smiles, smiles for everyone and history...


The History of Turkey

the expansion of the Turkic peoples across most of Central Asia into Europe and the Middle East between the 6th and 11th centuries AD (the Early Middle Ages). Tribes less certainly identified as Turkic began their expansion centuries earlier as the predominant element of the Huns... by the 6th century and by the 10th century most of Central Asia was settled by Turkic tribes. The Seljuk Turks from the 11th century invaded Anatolia, ultimately resulting in permanent Turkic settlement there and the establishment of the nation of Turkey.

The "history" of Turkey seemed to imply that Turkey 'owns' the ancient history of the region by skating around the Muslim conquest.


They had a number of very attractive walls through out the Street Fest, beginning with The Lydia Kingdom.

[The ancient kingdom in Anatolia from (1200-546 BC) Lydia arose as a Neo-Hittite kingdom following the collapse of the Hittite Empire in the 12th century BC. Lydia finally fell to Turkish beyliks, which were all absorbed by the Ottoman state in 1390 AD. The area became part of the Ottoman Aydın Province (vilayet), ending up as the westernmost part of the modern republic of Turkey.] 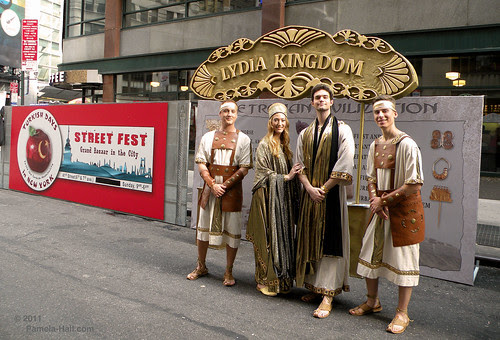 But, whose history is this? Persian, Greek, Christian, Jewish, Armenian. Whose?

Is this really Muslim history? You might presume Muslim, with that Star and Crescent emblazoned  on The Big Apple....

Continuing with Turkish Days Fest Theme is The Trojan Civilization

The IX City of Troy, was the last city on this site, Hellenistic Ilium, was founded by Romans during the reign of the emperor Augustus and was an important trading city until the establishment of Constantinople in the 4th century as the eastern capital of the Roman Empire. In Byzantine times the city declined gradually, and eventually disappeared. 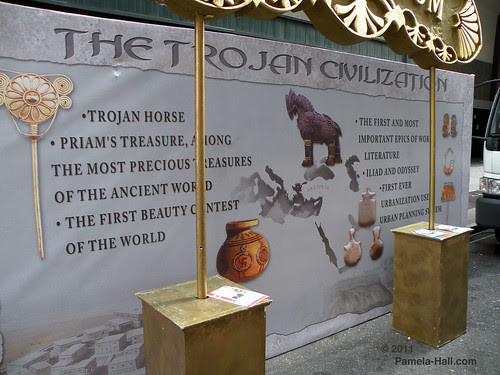 The Hittites established a kingdom centred at Hattusa in north-central Anatolia c. the 18th century BC. The Hittite empire reached its height c. the 14th century BC...the  Hittite language was a member of the Anatolian branch of the Indo-European language family. 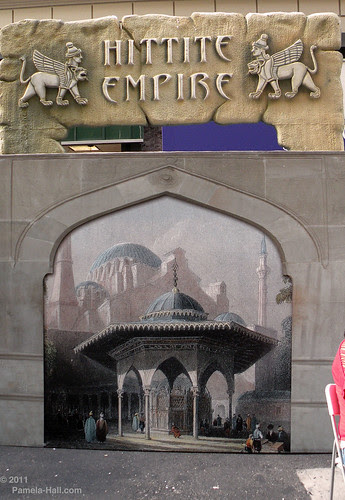 In the centuries before 600 CE, the Roman Empire was the most influential power in many regions that would later become Islamic.  Within 30 years of Muhammad claiming he had received his first revelation from God, these three civilisations - the Byzantine, Persian, and Arab - would collide as the Muslim Arabs brought down the Sassanid Empire and took a large swath of Byzantine territories in North Africa and Mesopotamia.  In 1453 the Muslims would finally defeat the Byzantine Empire with the sack of Constantinople. 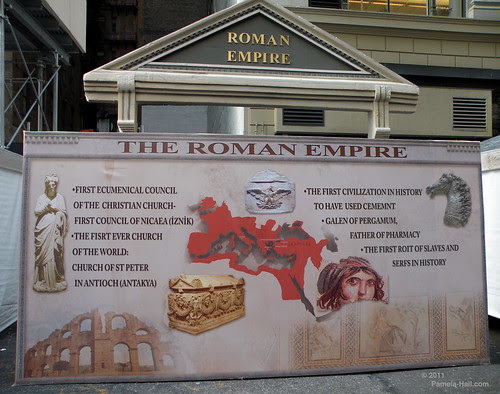 A Turkish ( Muslim) empire that lasted from 27 July 1299[8] to 29 October 1923. At the height of its power, in the 16th and 17th centuries, it controlled territory in southeastern Europe, southwestern Asia, and North Africa (see List of Ottoman Empire dominated territories).[9] 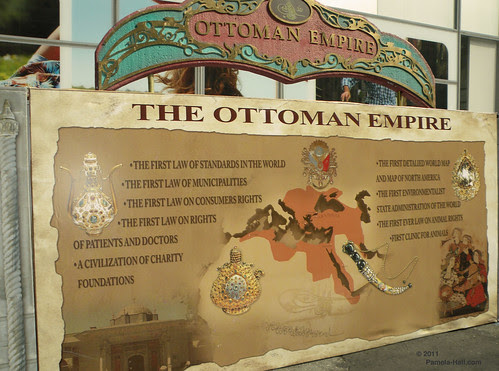 The booths had displays of women's handscrafts, calligraphy, Tughra Books (Tughra publishes books on Islam as a religion, Islamic history and art, Islamic spirituality and traditions. Formerly The Light Publishing, Tughra Books is dedicated to high-quality publications that contribute to the proliferation of peace and common understanding throughout the world.) an ANT store ( no it's not a typo) Antstores is your one stop shop for all book needs about Islam, Muslims, Islamic Art and Turkish.

When I returned after the Muslim day Parade, this Fest was going strong. 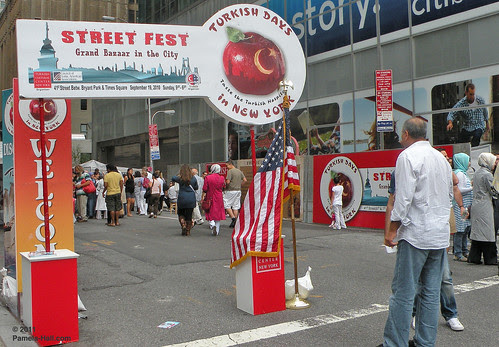 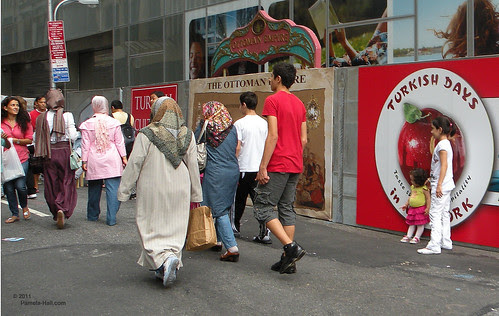 You could check out the food(kebab, pastry, meatballs) and a coffee lounge (men and women had separate lounges); a school, a disaster relief charity, a newspaper, an airline and the Cultural Center.  They all had booths. Also, Arts and Crafts ( copper, marble, silver) All packed in to one city block. ( pictures are in the slide show below) 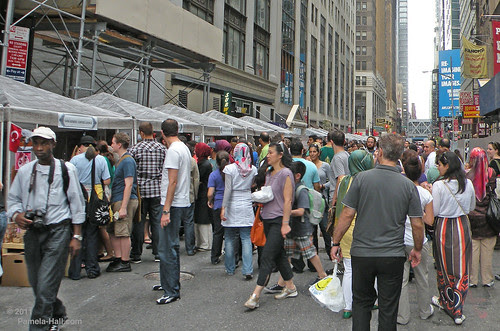 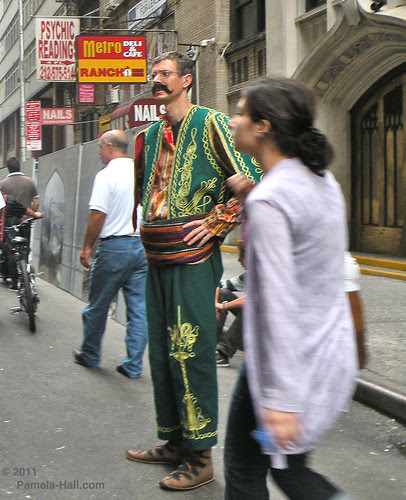 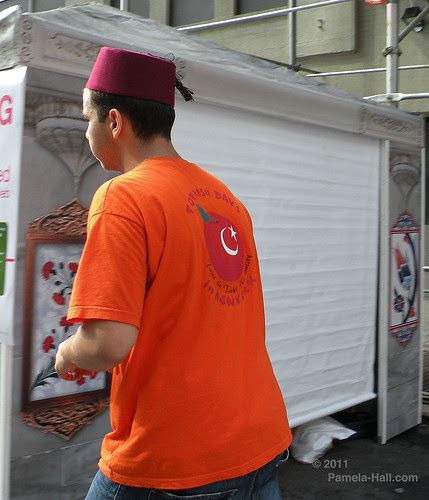 Didn't realize until I took these pictures that the Turkish Muslim women have such a distinct look by how they wear their head-scarves (do they call  them hijabs?) 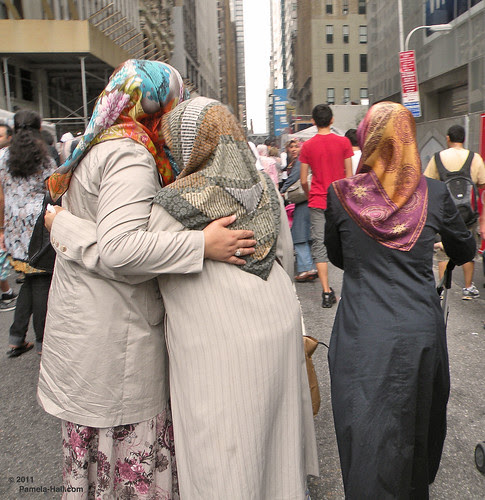 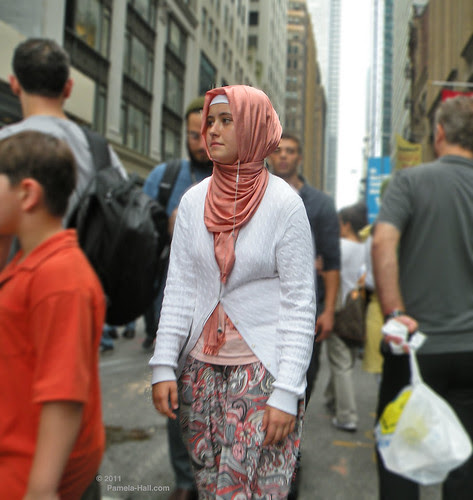 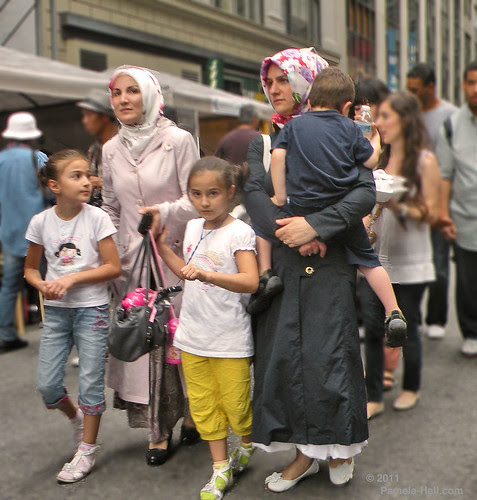 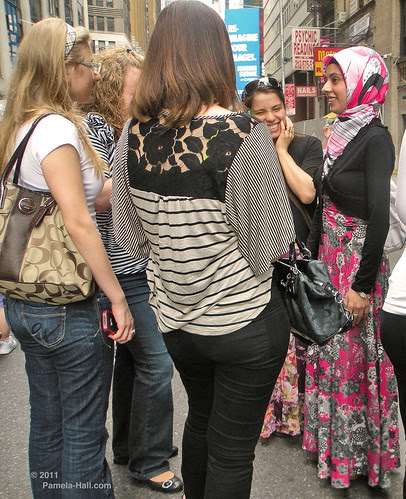 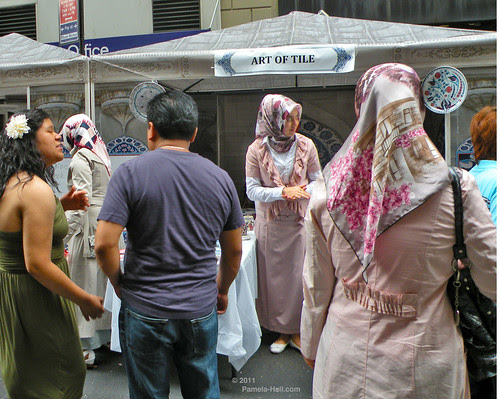 It was all very pleasant,very family (and tourist) friendly. 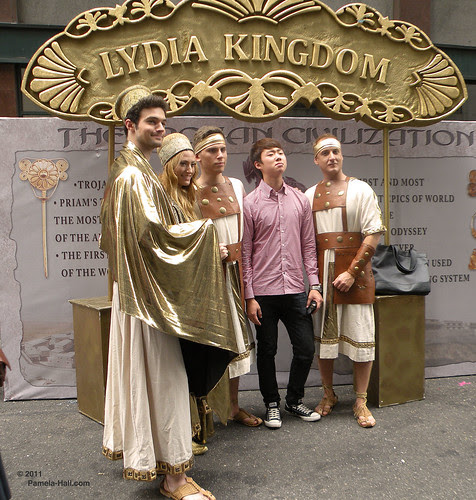 Though these characters  seemed a bit imposing... 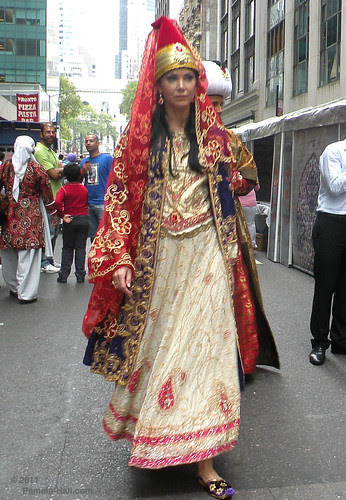 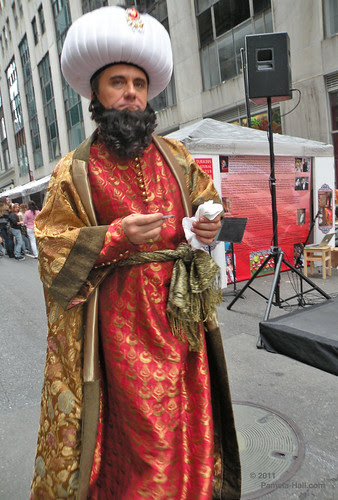 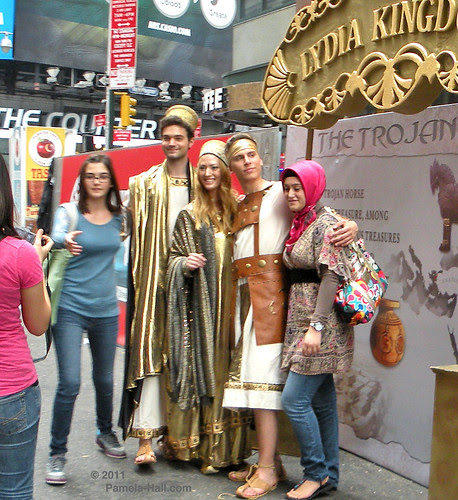 A nice place to hang for the afternoon 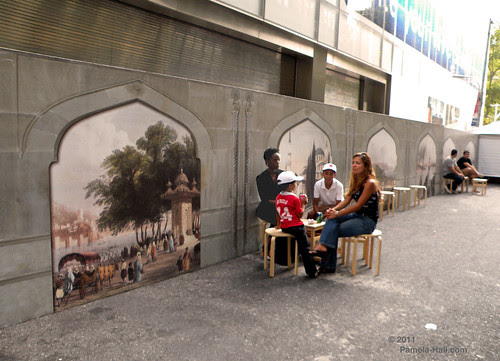 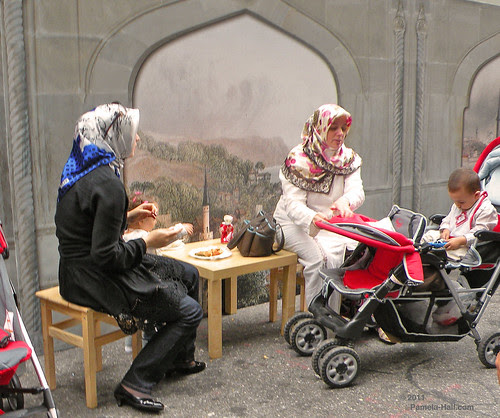 YET, from the day I learned of Turkey's persistent denial of the Thracian Genocide I became aware that this genocide denial is no little 'thing'. They have erased inconvenient elements by sugar-coating Turkey's Islamist history. The wounds of the Muslim Conquests run deep but the Turkish Cultural Center was here to promote a pretty peaceful region for tourism.

In  April 2010 , after leaving left a Memorial Ceremony to the victims of the Thracian Genocide, a genocide  committed by the Turks, I first discovered (only a block and a half north) the Turkish Cultural Center. That year they seemed to ignore the memorial . No apologies. Just didn't happen. 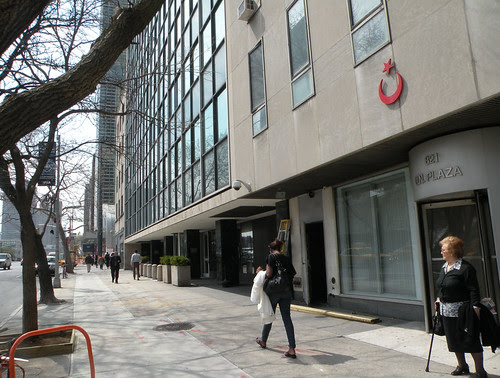 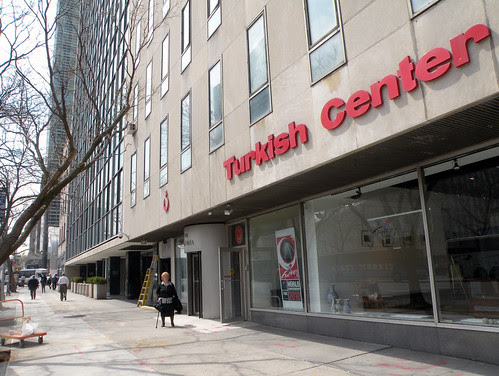 However, in 2011, with the memorial ceremony was once again a block and a half from the Turkish Cultural Center ,"someone" wasn't too happy about the ceremony. I saw a man steal these two pictures (in the center) of the Genocidal Turks ( Enlarged photos of “Enver’ Pasha and Mustafa Kemal.)

Steal the pictures. Erase the history 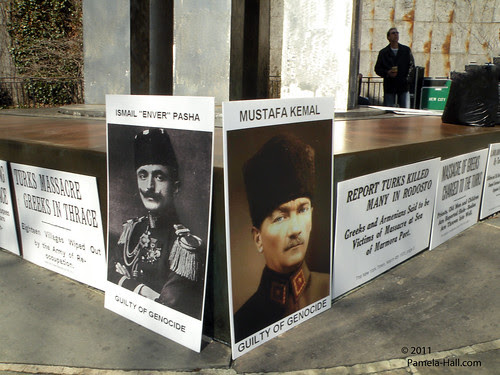 Anyone who passed through the Turkish Days Street Fest, took with them the puffery and joys of the Islamic State of Turkey. "Fly Turkish Airlines, The Wings of Champions." 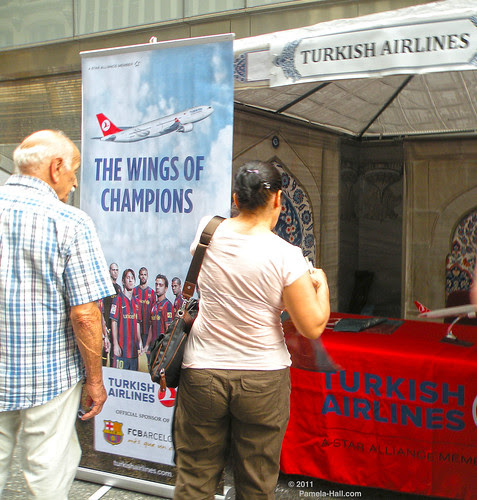 Juniper in the Desert said...

I am certain the lady in the red velvet with the pointed hat and veil is in a Kurdish costume, they look exactly like the Medieval European dress. They must have copied the Kurds.

Thanks, Juniper. I'll glad to have that info. I wasn't sure sometimes if they were in costume or dressed in modern day Muslim dress. I'm less familiar with the Turks.