Part 7 of 10 - Aug 26, 2011 (Day 2) of an 8 hour Symposium at NY Law School Law Review On "Sharia in America:Principle and Prospects". The purpose was to examine the place of Islamic Law in The United States.  For this speaker, Professor Sadiq Reza gave a more sedate introduction.

Notes from Professor Reza's intro of Professor Kristen Stilt (Northwestern University School of Law her specialization is Constitutional Law)
Reza says, "In Professor Stilt's field of law she has written about the aspirations of Iraqi people to be governed in some respect by Sharia Law. Turkey not the model.It's neither Muslim nor a Democracy. Nor is Iran . Suggests Egypt as her model (middle of the road) . But, today she'll be addressing the wave of anti-Sharia legislation" 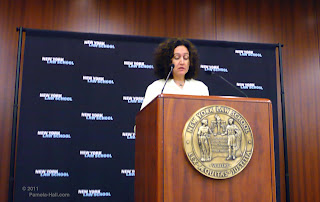 NOW the Q and A (which also about 30 minutes. A few questions were long as were the responses)
Questions and topics addressed :
AUDIO of Professor Stilt's presentation and the Q and A: (FYI-because the audience microphone wasn't used improperly, there were times I had to reposition the hyper-sensitive audio recorder to catch the questions and causing  occasional noise but it doesn't last)

The Sharia Symposium continues with two more speakers. Professor Umar Moghul (Islamic Finance),  and Professor Sadiq Reza (Criminal Law) then concludes with a Plenary Discussion.
.
However, these posts won't be going on-line until next week; after the SIOA/AFDI 9-11 Memorial Freedom Rally.
..
AND please follow link below to a fabulous article on the symposium written by Alyssa Lappen "Sharia Lobby Shifts into Fifth Gear"
Posted by Red Squirrel (Pamela Hall) at 1:00 AM