Demanding justice for the Newburgh 4...who were convicted of attempting to bomb a synagogue in 2009.

Predictably, they claim the FBI did it...

just because they're Muslim.

Check out this pdf put out by NYU Law School 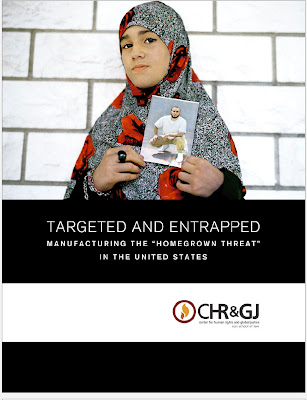 Quick View of the PDF is here


The VIDEO: Four speakers spoke on the steps of City Hall (before they marched to the Court House)

And on this day, as they waited in front of the court house....

The conviction of the Newburgh 4 was upheld.  The NY Post reports:"....prosecutors described the men as “ticking time bombs” who needed to be taken off the streets for good."

AP
Justice was meted out to the tune of 25 years. Justice? You got it!

For more on the: "Muslims are victims of the FBI" go here >>

Posted by Red Squirrel (Pamela Hall) at 10:28 PM No comments:

TEN YEARS AFTER 9-11 they are still asking, "How long must St. Nicholas WAIT to Re-Build?!"

The video is 45 minutes (yes) but well worth your time. Listen to the intelligent statements and pleas regarding the STONEWALLING of the City Of New York towards St. Nicholas Church, as they have been denied over and over for TEN YEARS to  rebuild their Church Home (while the city supports the creation of a mosque in a Coat Factory) ...

Brief audio hiss during Fr. Romas' prayer, about 3 minutes...then ALL is well...

was host to this rally at Ground Zero .....calling for St. Nicholas Greek Orthodox Church to be rebuilt at 130 Liberty Street.

The rally was on Sunday, June 26, 2011, 2 p.m., at Liberty Street and Trinity Place in Lower Manhattan... across from Ground Zero.  Where generations of a church...that has been there since 1913...came together.... BEGGING to rebuild their Church!

Federal, state, and local legislators were invited to attend, many were there, speaking to the OUTRAGE and stonewalling of the Port Authority and NYC and State politicians who have kept St. Nicholas from being rebuilt.

Ten Years later they must still beg to REBUILD  a church that has been at that location since 1913....

Yet, it seems Mayor Bloomberg can't do enough to help build at Mosque in a Coat Factory at Ground Zero

While TEN YEARS LATER , negotiations to rebuild St. Nicholas Greek Orthodox Church, the only house of worship destroyed in the attacks of September 11....negotiations between the Greek Orthodox Archdiocese of America and church representatives and the Port Authority of New York/New Jersey came to a halt in August 2010.  The people of St. Nicholas ask : WHY?

In support of the effort to rebuild St. Nicholas at 130 Liberty Street, a site chosen by the Port Authority, AHEPA submitted more than 20,000 signatures .

They held this rally to cry out to the City of New York and Mayor Bloomberg: CUT THE RED TAPE !


Posted by Red Squirrel (Pamela Hall) at 7:10 PM No comments:

On June 18, 2011 , in lower Manhattan at the Federal Building (26 Federal Plaza) , Families For Freedom ,  was planning a protest....under the guise of "vigil"....  by using Father's Day to promote their long-standing "separation of families" theme

They were trying  to gain support for HR 250 (which is likely to go nowhere); another "dream"-type amnesty with our NY Congressman, Jose "Sellout" Serrano, behind it

NY ICE  held a Counter-Protest to this 'vigil', which was of particular interest to those who want to end the anchor baby abuse of the 14th Amendment and stop HR250.

NY-ICE says (in contrast to the opposition's propaganda). This is just another push for amnesty "dressed up in baby clothes". "Why must they ONLY be reunited in the U.S.?"

NY-ICE points out that the "14th Amendment was NOT for "anchor babies"  and demands that the U.S. government "STOP ANCHOR BABY AMNESTY"  and END..... 'Anchor Baby TOURISM '...... NOW!

("The Marmara Manhattan, It’s a hellava deal, for $7,750 plus taxes, the hotel offers expectant mothers – – many from Third World Islamic countries – – a one-bedroom suite with airport transfer, a baby cradle, and a gift set for the mother. " )

"Families For Freedom" always hits HARD with the "separating families" theme but NY ICE responded, as always, with: "There should be NO reward for illegal alien trespassers."

Plenty of immigrants come to this country legally, go through the process to remain here legally: Obey the LAWS of this Country, as they would be expected to do in their HOME countries( if they just happened to be immigrants there)  WHY should America be any different?

Here is a statement from the  opposition. They said, "This is an important event for both our Kids and our Dads (and Moms too), as it brings recognition to the CHILD CITIZEN PROTECTION ACT (HR 250) and the plight of separated families. The event will be MC'd by Janiah and Fanta of Families for Freedom  "

NY-ICE did what all Counter Protests aim to do,  disrupt the opposition and get the word out of a *different* aka accurate point-of-view! It was a FUN counter protest.  The NYC Police and Home Land Security were low-key. Very casual, actually. Leaving NY-ICE counter-protestors to 'hang' with the Illegal Immigration/Sanctuary Crowd. Very Interesting Day. And everyone (on our side) seemed to have a good time.

VIDEO of the protest

A shorter video (with the stills)

IB TIMES was there>>


And to read more on the Illegal Alien Lobby, go to  Heather Mac Donald's: "The Assault on ‘Secure Communities’ " (this an an excerpt from a longer article)

"The pro-illegal-alien lobby does its best to obscure the fact that illegal aliens are illegal.

It is hard not to feel deeply pessimistic about the country’s chances of reining in illegal immigration, in the light of the increasingly successful battle against the Secure Communities program.  [SNIP]
These recent changes mean that the Obama administration is officially buying in to the premise of the illegal-alien lobby: that the default position toward illegal immigration should be that no penalty attaches to it, unless an illegal alien commits a heinous crime (though even that limit on the no-deportation rule remains highly theoretical, as I have never seen an illegal-alien advocate affirm a single deportation).


Supporters of the rule of law in immigration matters can oppose official amnesty (also known as comprehensive immigration reform) all they want, but it’s too late. Our de facto amnesty policy is rapidly becoming official, sending the message to would-be illegal immigrants the world over that the U.S. has no intention of enforcing its national sovereignty. Such a message makes state efforts like Arizona’s and Alabama’s look futile, even wistful."


— Heather Mac Donald is the John M. Olin fellow at the Manhattan Institute and co-author of The Immigration Solution

Posted by Red Squirrel (Pamela Hall) at 10:47 PM No comments:

On June 15, 2011, a day that was designated as "Justice for Janitors Day: a reminder to all workers that when we stand together and fight for a better future, we can win," said Kevin Doyle, 32BJ Executive Vice President. " Stating that , " Together, by fighting for good jobs, we can restore the middle class, repair our economy and reclaim the American Dream." (OY) .

SEIU used this day to co-ordinate another of their "required attendance"union-march-protest rallies in Brooklyn at the War Memorial. It was a  “March for the Middle Class”  called by the New York City Central Labor Council to protest government cutbacks they say targets middle-class and working-class New Yorkers." 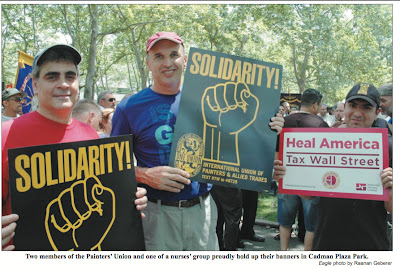 They gathered to listen to speeches about "Working men and women from the public sector, private sector and building trades " who marched in solidarity to say "an attack on one is an attack on all" and "enough is enough" They claim this was  "in response to repeated and seemingly coordinated attacks on middle class workers"

This War memorial is was where the union worker-bees were told to gather, reportedly tens of thousands....possibly even 15 to 20,00 (in another report)

They gathered on the Brooklyn side  from 1 to 2:30 (U-NIH-TEE......SO-LIH-DA-RIH-TEE) before marching across the Brooklyn Bridge (the union "bigs" lo-o-ove to do this march) Having followed one-too-many of these photo-op marches I had no desire to listen to their repetitive propaganda and the march with them, so I decided to pass; letting the lame-stream press make the report on this section of the day.

Instinct suggested there would be more 'festivities" on the Manhattan side and there was, as advertised, an event planned for Fifth Avenue in support of  SEIU BJ32

But it would seem that UNITY and SOLIDARITY with the Janitors (etc) didn't actually carry over to the Fifth Ave leg of the the 4 PM protest. 15-20, 00??? Then there were A LOT of 'no shows' for this union show of Solidarity for JUSTICE for  SEIU 32 BJ.

SEIU BJ32 is described as the "largest property services union in the country : Security officers; doormen, porters, and maintenance workers; bus drivers and aides; window cleaners and food service workers; a diverse coalition of hard working immigrant and native born individuals coming together in pursuit of the American Dream."   ....

Is there ANYTHING that SEIU hasn't gotten it hooks into??

Made a short video of the BJ32 crowd hanging at 46th, 48th and 50th streets. They were there at 4 PM as announced but they were happily packing up and heading out at 4:10!!

One  group at Rockefeller Center hung around for a couple of speeches til about 4:40, then they were outta there.

In the  video, I did catch a very HAPPY celebrity participant: Borough Prez, Scott Stringer, waving his yellow ribbon in SOLIDARITY for JUSTICE  (at right of picture below)

This was so NOT a 'happening' from 34th to 59th st (at EVERY corner!) as advertised. Everyone did not manage to show up to "Wave For Justice?" And I have yet to get a read on what "injustices" these well-paid union members may have suffered ....

...other than the very REAL abuse they may have suffered at the hands of SEIU...

Clearly these are the happy, clueless worker-bees of SEIU...

But.... did not see ONE sign "in touch" with the latest news of the day: Members of Congress suing Obama for fighting an ILLEGAL WAR IN LIBYA.

These 'peace grannies' whole reason for living was to oppose illegal wars and to impeach Bush. They hit this spot every week for three years or more demanding that the U.S get out of Afganistan and Iraq (and Israel-Gaza).

A study in senility ? or just the obvious narrowness of their protest: Anti-WAR only if can be labeled as a Republican War.

BUT, Obama's very illegal war in Libya? Hands off.

Can we say HY-POH CRITES???