Mohammad Fadel was a last minute replacement for Sherman A. Jackson of the University Michigan School of Law. Jackson's area of specialization is Islamic Law and Theology. 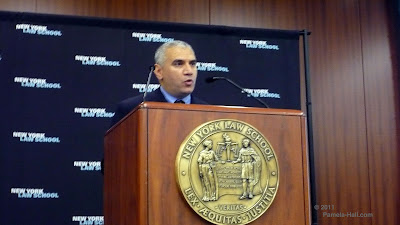 Professor Fadel specializes in "Islamic Constitutional and "Interaction" Theory" . He flew in from Canada for the symposium on short notice.

The current news-of-the-day (that had the symposium all a twitter) was the release of a web site named "FEAR INC" . 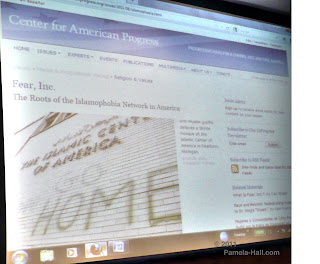 This was Professor Fadel's first of only a few slides and he stressed how important this new site is in fighting Islamophobia.

Professor Fadel spoke for about 40 minutes, followed by about 20 minutes of Q and A.

He then moved on to the more serious topic of Sharia.

Reviewing my written notes reminded me how often I felt Fadel seemed to jump back and forth; flirting with "contradictions of theory" (which will be apparent in the audio)


6. Jurisdictional rules do not bind those who do not recognize it.


7. Jurists in Islamic States are bound by these rules (Figq)


8. Doesn't like the labels; religious/secular when referring to Sharia Law

More statements by Professor Fadel, " Muslims have been a minority since Islam came on this earth. Started with a Minority of One: Mohammed"


Muslims suffered persecution so they went to Medina. Wrote a Charter. Became a State

Our Law-Not God's Law. ( found this a bit confusing) Avoid entangling God in undertakings.
But not this : Cannot sign Treaties that humiliate a Muslim

Democracy is not about a Communal Tomorrow (like Islam is)

1. Mentioning advocating of Sharia in U.K. Fadel feels they are marginal

2. A young woman asked about the anti- Sharia movement and fear of Islam. She wonders where are they getting this?


3. Young man thanks Fadel for mentioning Fear Inc today. Asks how to counter this fear. To explain to friends and family this disinformation about Sharia Law


4. Fadel says you can say I don't know how Muslims have reconciled their faith and our Constitution, but seems they've done a good job of it.


5. To a woman who asked about Jewish Law. He gave an example. No one , Muslim or Jew,  would allow a State Law to say they must murder.


6. A big LEFTY in the audience, instead of asking a question, did his own little 'commercial' for his group, Jews Against Islamaphobia. Used that moment to make reference to David Yerushalmi and Park 51.


7. An Asian woman asked, "Can Muslims (as a minority) speak up forcefully against Foreign Policy Issues."


8. Fadel mentioned the utter silence of the Civil Rights (Humanitarian Rights) groups on the Left. The Constitution shouldn't stop at the Nation's boundaries. Complicated when the U.S. is waging war over seas. Killing over-seas with impunity.


Slideshow of the few slides: