On the evening of December 17, 2012 ( NYC) the amazing Pamela Geller of AtlasShrugs.com, was invited to speak to the Gotham Tea Party at their first anniversary celebration.

It was total crunch time as Geller was scheduled to appear on Dr. Drew's show at CNN that night( topic was gun-control). But all went well.  She spoke to a packed house of patriots, freedom lovers, decent and good people on the fantastic Gotham Tea Party's one-year anniversary. It was standing room only. Spectacular.The Gotham Tea Party is growing by leaps and bounds.

Introduced by Lawrence Winberry, we were then treated to an inspiring speech by Geller.

She addressed the on-going threats to our First and Second Amendments as well as her successful anti-Jihad subway and bus campaigns. Geller even managed to take a few questions from the audience before she headed over to CNN and the (obnoxious) Dr. Drew Show.

Victor Davis Hanson, an historian, professor (with a Ph.D. in Classics) and esteemed author, was the honored guest speaker for the Philadelphia Freedom Center Speaker Series on the evening of December 11, 2012. Held at the Philadelphia Ritz-Carlton, we came together for a wonderful dinner, after which the Philadelphia Freedom Center's, Craig Snider, introduced Dr. Hanson. The main topic of the evening was, "American Exceptionalism". 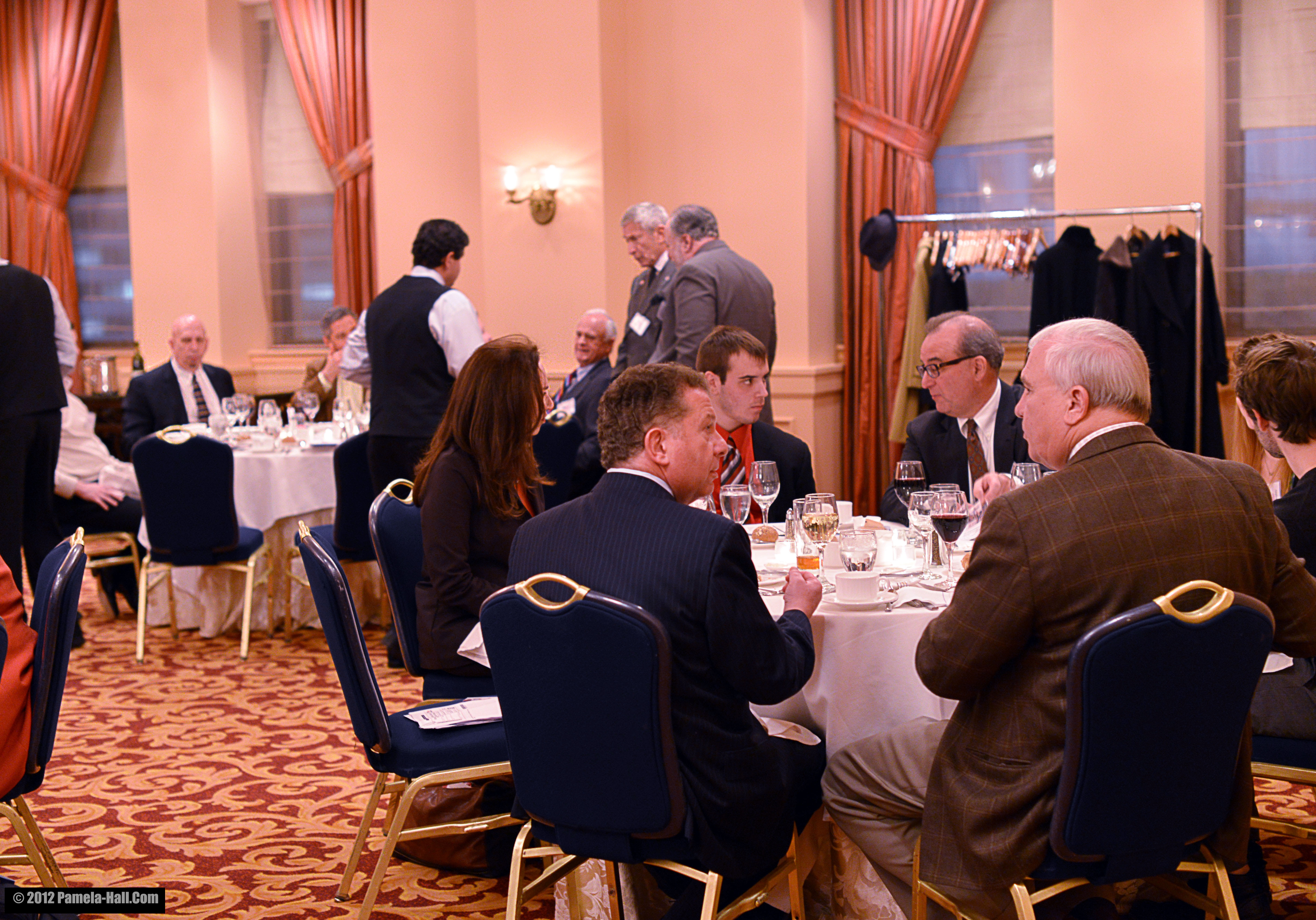 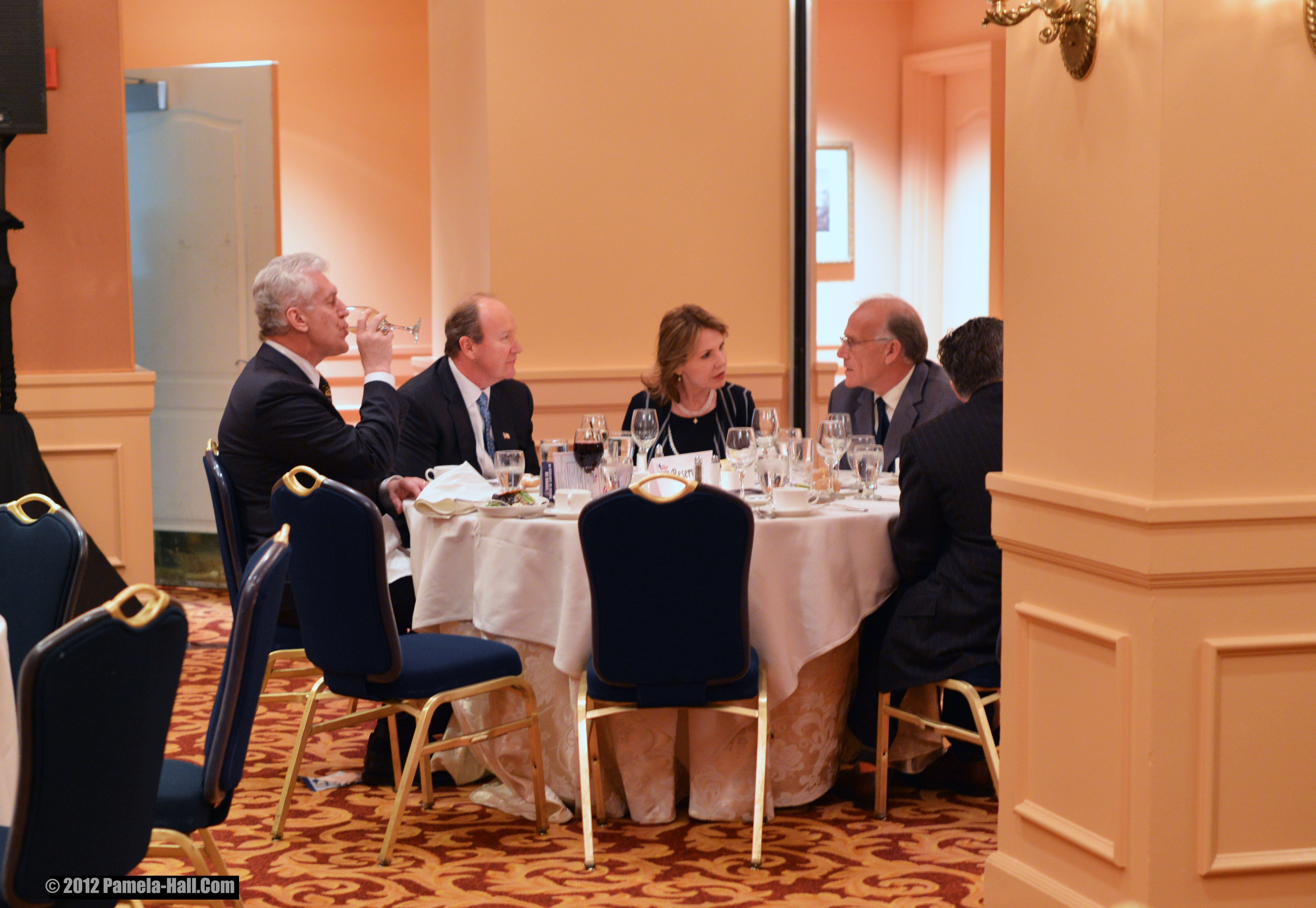 Victor Davis Hanson, while discussing "American Exceptionalism", assessed the failure of other cultures and redistributive economies including Rome, Sicily, North Africa and the Pharaohs, who ruined Egyptian agriculture.

VDH mentioned that the original urge of civilizations to protect property lead the way to a constitutional government. Other topics were amnesty, immigration, Obama, unions, economic strikes, and the NEW Mason-Dixon Line (250-250-250 aka $250,00) that has arbitrarily been used to demonize economic success.

And ENVY, that can also be seen as "a positive" emotion. Not all envy means you want to steal from the successful, it can merely motivate one to pursue one's own success. Then, back to Athens, the Persians and Hannibal; Rome and the Goths; France; Russia, Germany and Japan; the Nationalizing of the British Heath-Care and Steel Industry and the economic devastation of what had been a successful  economy. In terms of success that was lost and gained, examples were given of Liverpool and Detroit VS Nagasaki and Hiroshima....

Amazing how many areas VDH was able to touch upon as he examined "American Exceptionalism".

Finally, the Q and A with questions about the fiscal cliff, voting and entitlements, qualifications or LACK-of in those who seek or ARE President of the U.S. And his very astute assessment of human nature and it's need to WIN. To be on the winning side is more important that what the issue may be, even in America. If we start to lose we tend to turn against the cause (as in Iraq)


Hope you enjoy the video. (Please watch the video in HD for best quality)

A perfect end to the evening was a book signing  before Dr. Hanson called it a night. 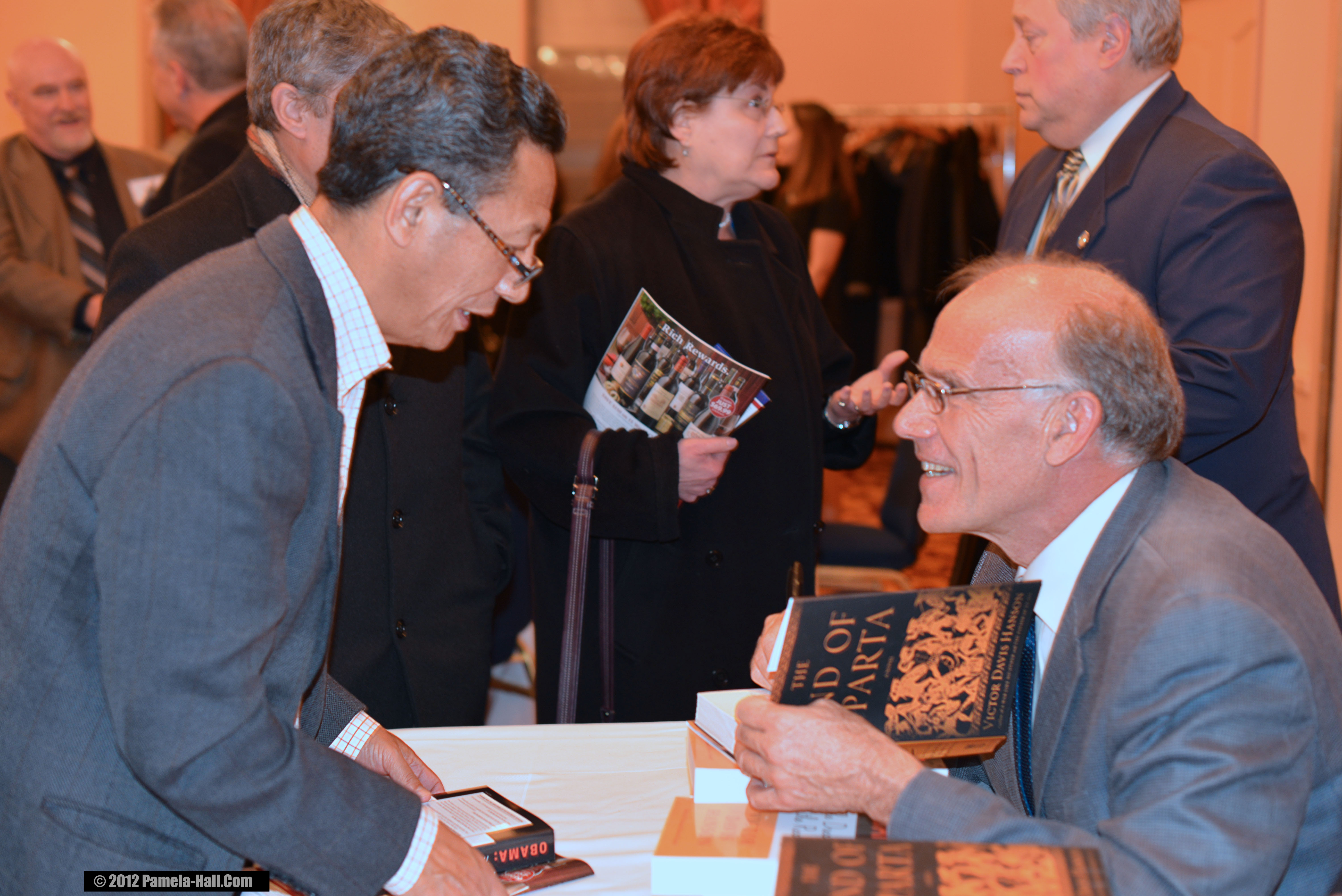 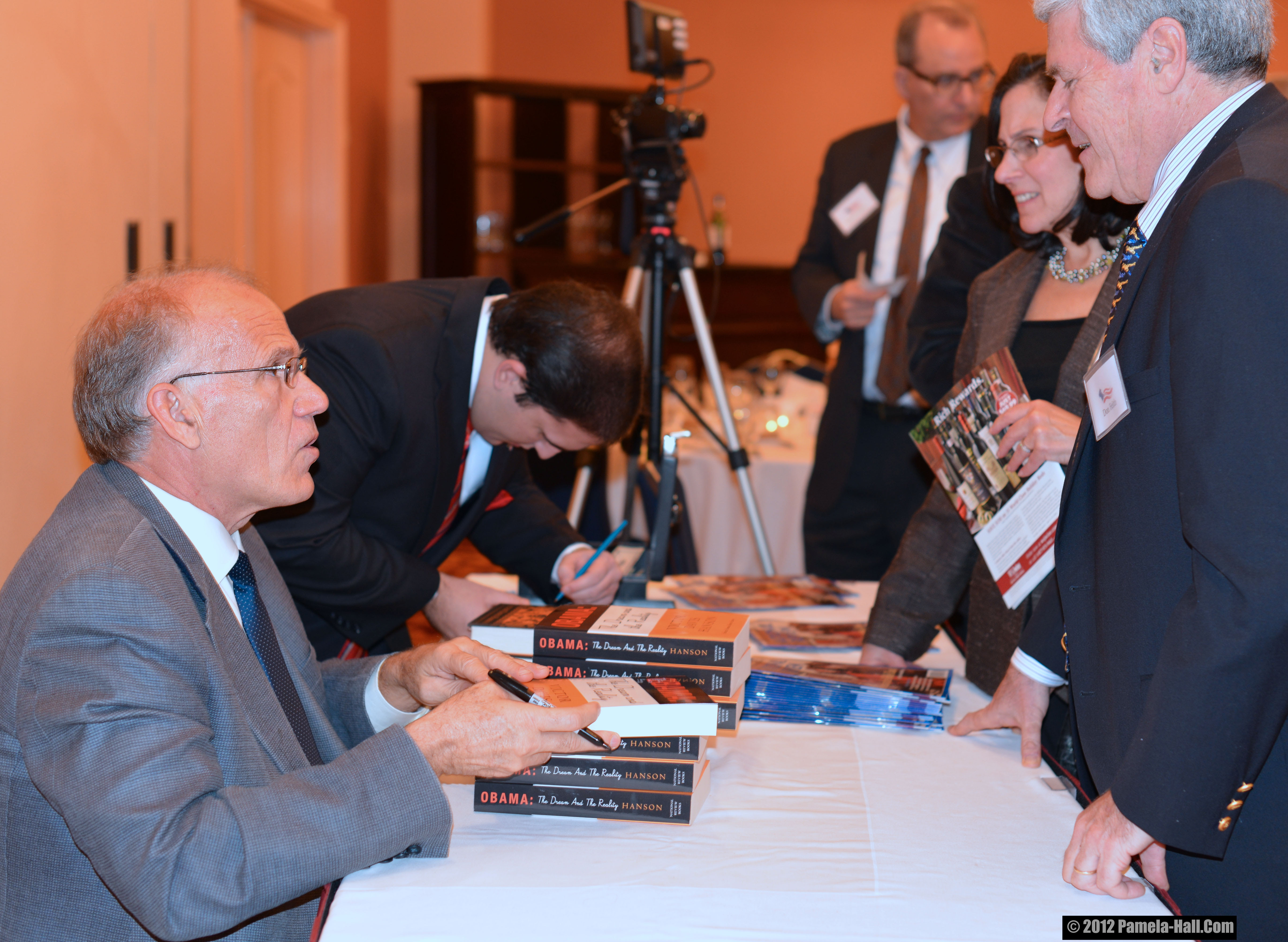 Victor Davis Hanson is an American military historian, columnist, political essayist and former classics professor, a scholar of ancient warfare. He has been a commentator on modern warfare and contemporary politics for National Review and other media outlets. He was for many years a professor of classics at California State University, Fresno, and is currently the Martin and Illie Anderson Senior Fellow at Stanford University's Hoover Institution. Hanson is currently a Senior Fellow at the Hoover Institution and Fellow in California Studies at the Claremont Institute. 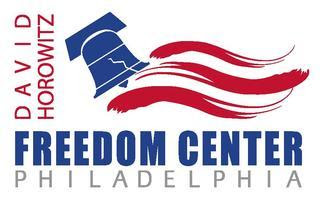 Craig Snider, the Chair of the Philadelphia Freedom Center, gave the opening remarks and then introduced Andrew C. McCarthy, the new Executive Director of the Freedom Center. McCarthy is known for his prosecution of the Blind Sheik and is the author of several books on the threat of radical Islam. He spoke briefly before introducing John Fund. 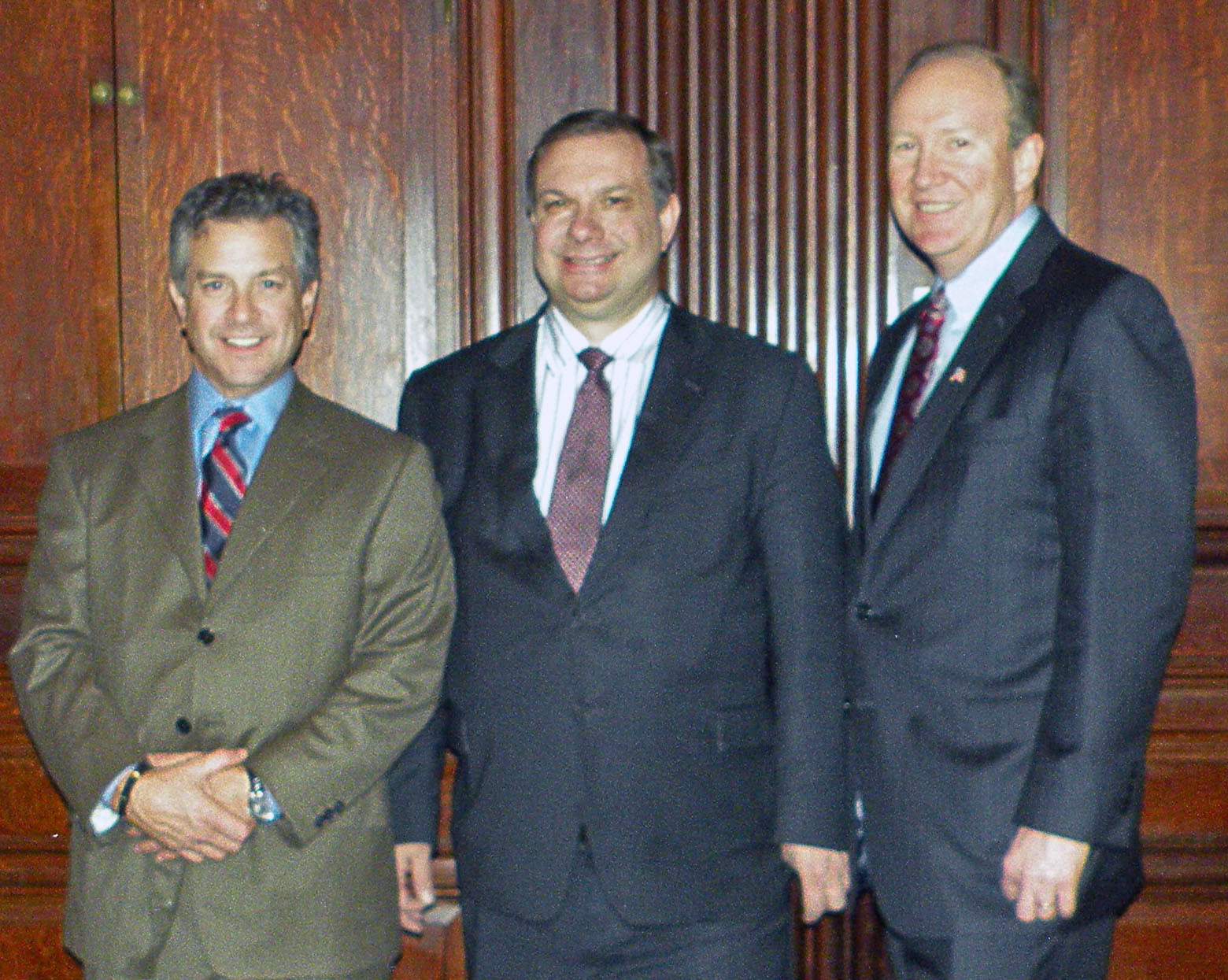 John Fund gave a powerfully interesting assessment of the 2012 election, the economy, immigration and even Benghazi while sharing his thoughts on what the next 4 years may look like. This was followed by an equally interesting Q and A. I was glad that the discussion included Allen West's recent election woes in Florida. (be sure to watch in HD)

Afterwards, Fund signed copies of his book, "Who's Counting: How Fraudsters and Bureaucrats Put your Vote at Risk". ( PJ media has a review here) 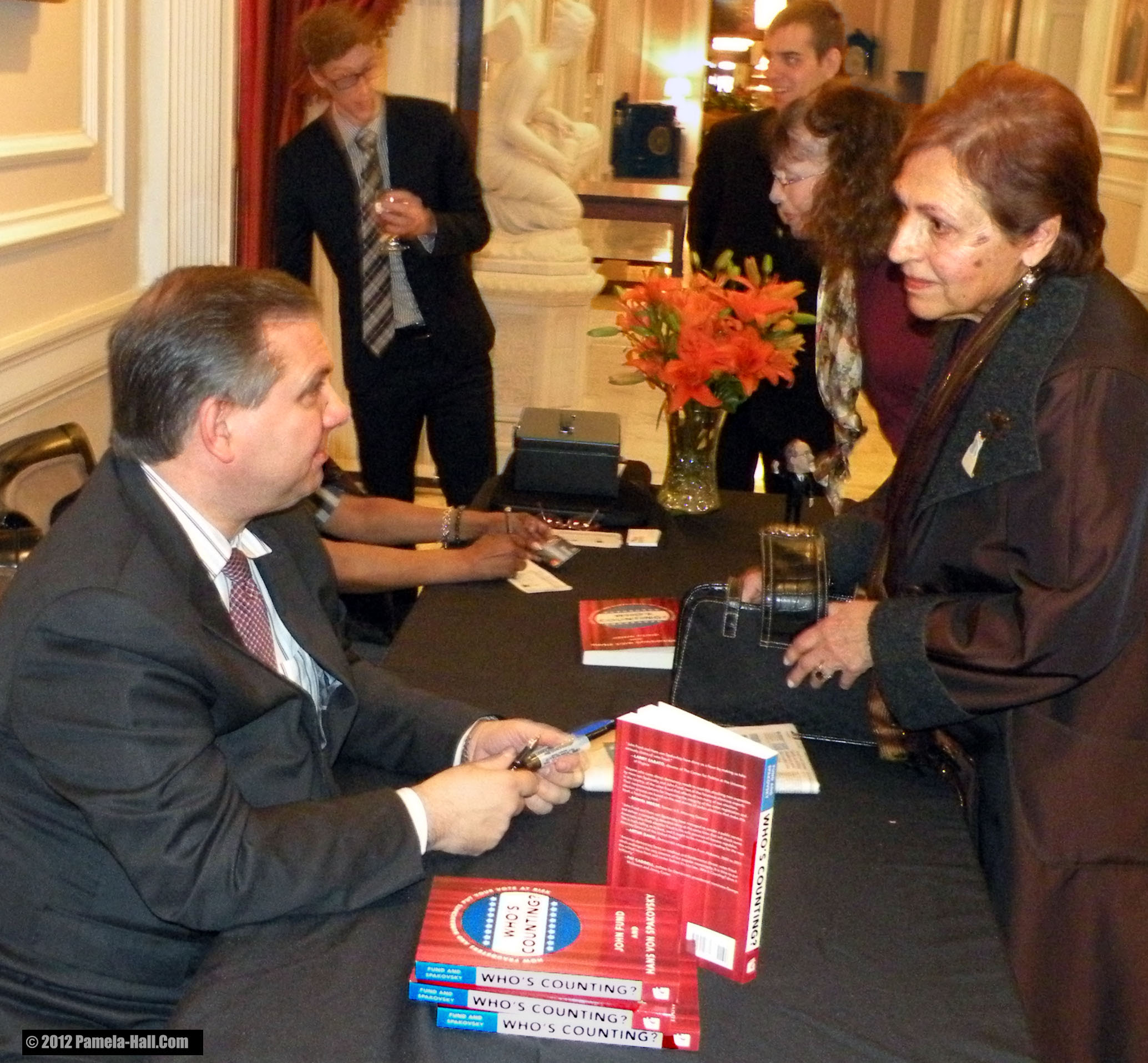 Fund and McCarthy both stayed after to chat more on the elections (post and future). 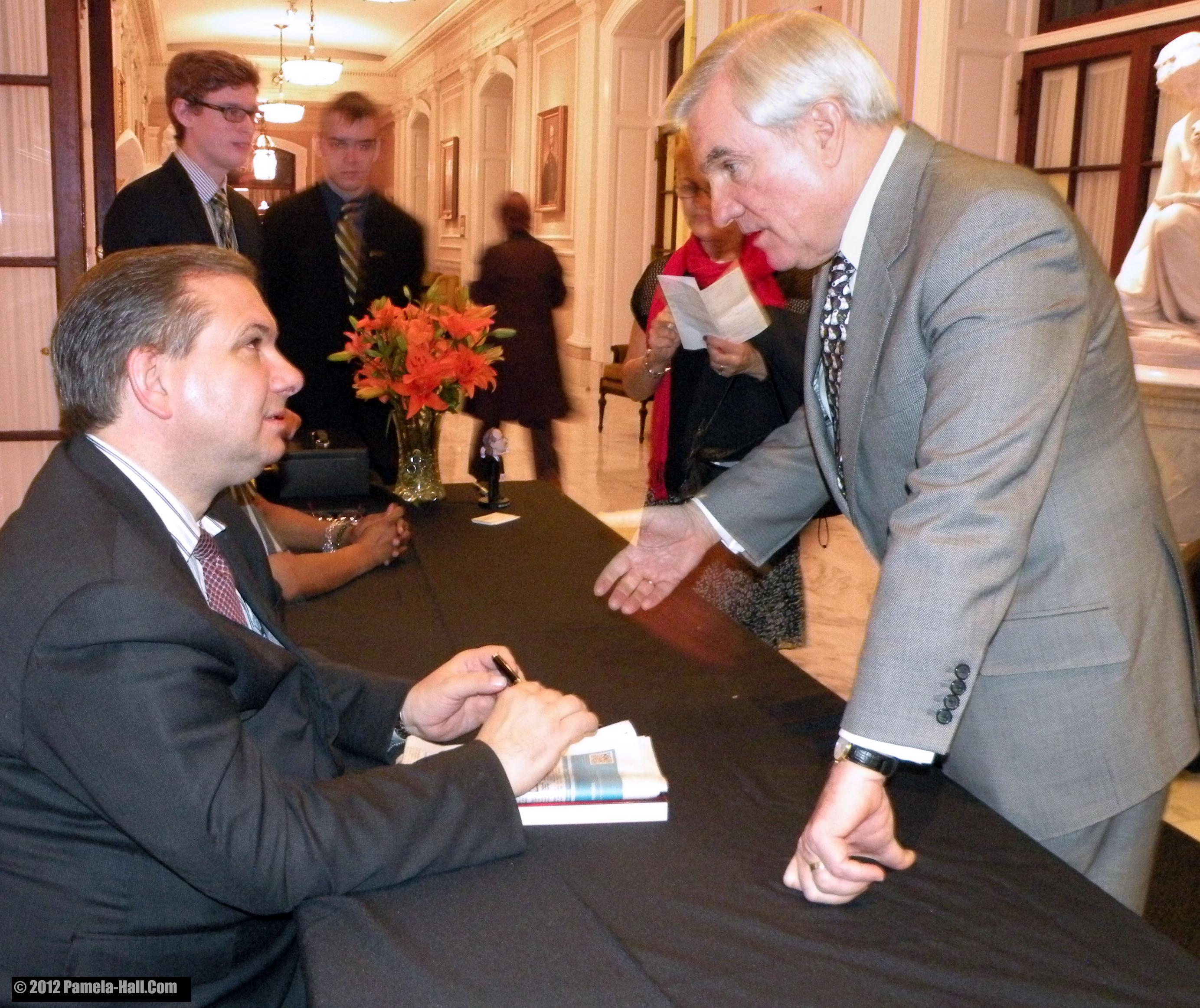 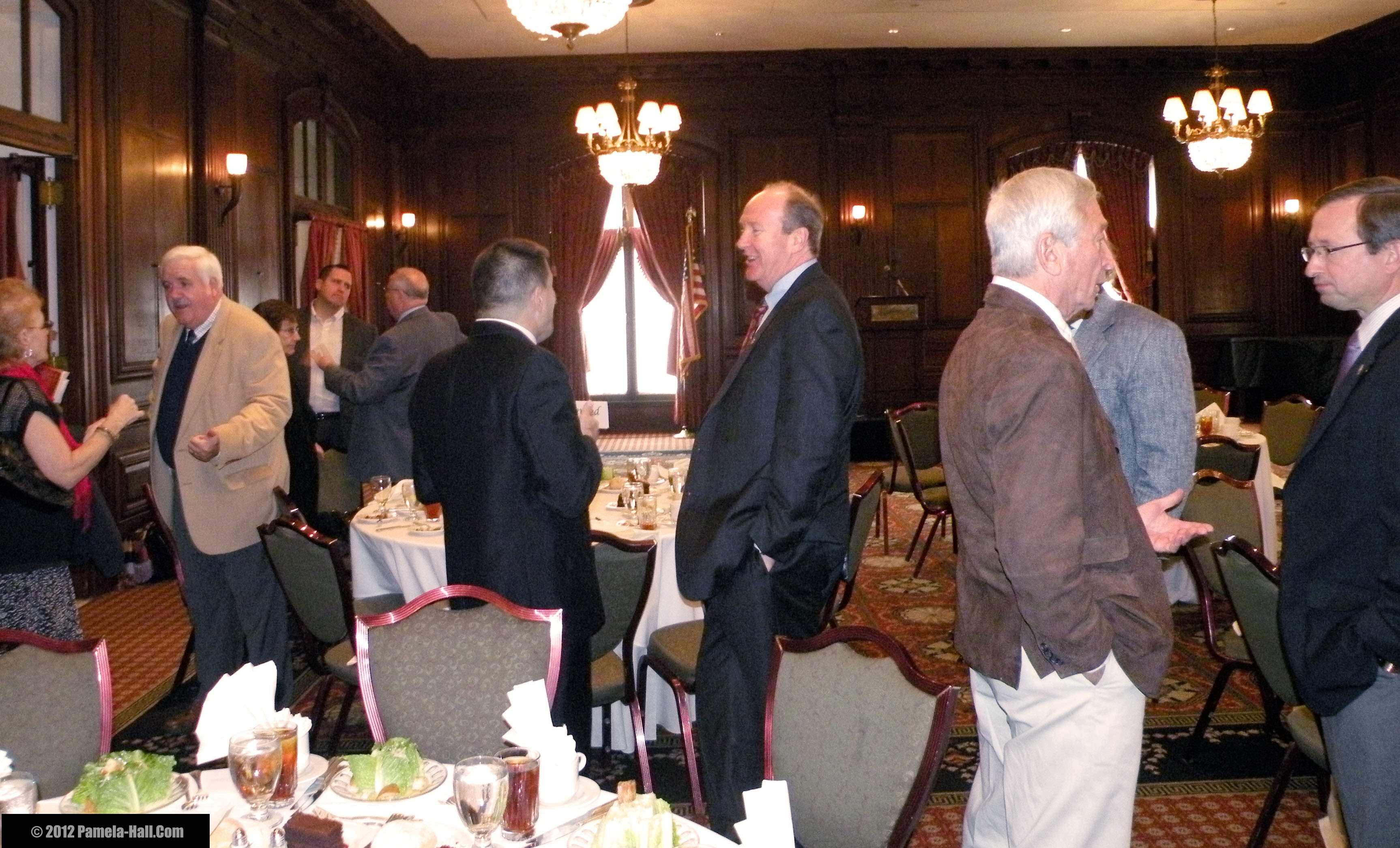 I had arrived post-election still struggling with my disappointment and lacking much enthusiasm towards the next four years. However, Fund's honestly critical perspective and the thoughtful questions from the audience managed to 'loose the bonds' of my malaise as we were encouraged "to be more aggressive in our messaging" and reminded "that each of us needs to become a media outlet to publicize the facts that matter."


Next event at the Philly Freedom Center will be Victor Davis Hanson on Dec 11.

Posted by Red Squirrel (Pamela Hall) at 8:09 PM No comments:

A rainy day in Manhattan. Times Sq. December 9, 2012. Outside the Marquis-Marriott. Found what I came for, stalwart defenders of Democracy,  real Democracy, not the Marxist-Sharia charades. 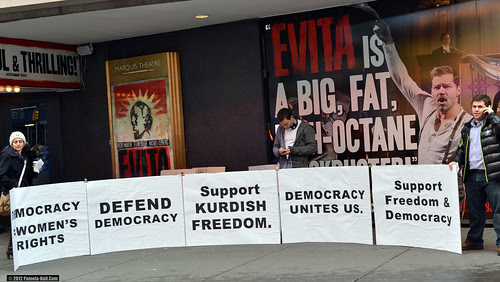 And, of course, tourists. Lots of tourists at 46th and Broadway. A location the Leftists love. They hang here often, spewing  their anti-Israel and anti- American messages. Great to see a different, more positive message reach out to the tourists for a change. 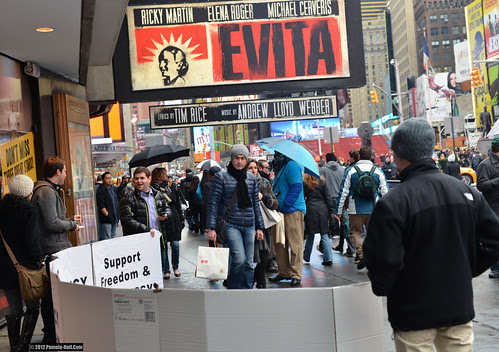 Vendors, halal carts, buskers dressed as cartoon characters filled the sidewalks as these young defenders of Democracy stood quietly in front of the Evita sign. Too quietly.... Standing quietly in NY, just doesn't get you noticed.

If only they had a bit of the Leftist moxie. The passers-by needed to be engaged,  sharing specifics the banner didn't offer. A web-site, maybe. Or just thoughts on how someone could join their movement. Talking....one on one....about democracy to those walking by and what it means to them....


Unfortunately, there was no way of knowing whether they were college Leftists, Union shills or MSA-CAIR front-groups pretending to support Western values. 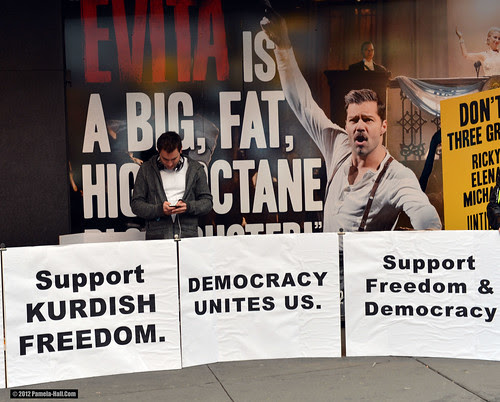 The Leftists seem to have no problem when it comes to preaching their dogma. On November 21, a few NYC-Commies, led by 20-something Caleb Maupin, were protesting the remake of "Red Dawn". They confidently preached their garbage to the passersby.You knew why they were there (in support of the murderous NoKo Regime) 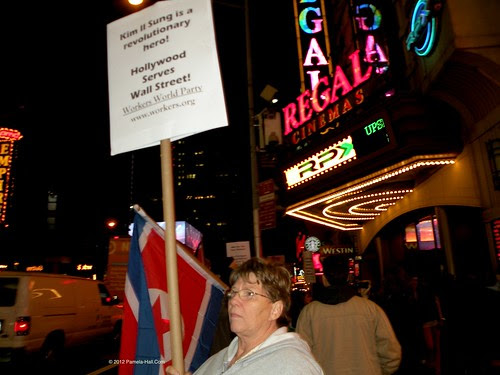 And very definitely knew who they represented (Workers World Party.) 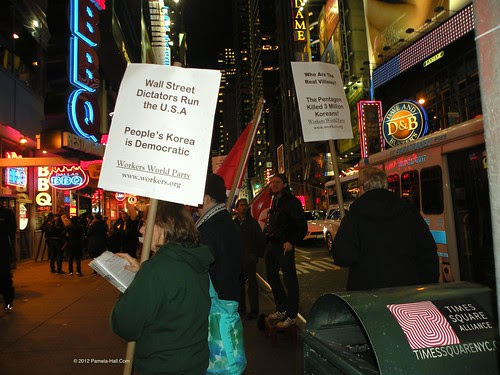 I don't admire them. Just observing....The Left is very adept at enticing the gullible public with buzz-words that mask their real goals.

Hope the rally I saw today in support of REAL Democracy, will be able to find its voice. Not by trickery, just by the force of confidence. Their message on-line is a good beginning....


From their Face Book Page.

People of all religions, ethnicities & countries are called upon to join forces to Support Freedom & Democracy - Confront Evil


We thank America for Supporting Freedom, Democracy and Self- Determination of many countries around the world. America will confront new challenges & evils in every generation - May it continue to be Land of the Free & Home of the Brave!

America & Canada:
We recognize and appreciate American & Canadian efforts to Promote Freedom & Democracy around the world.

Armenian People:
We recognize the Armenian Genocide and call on Governments and World parliaments to recognize past atrocities and support Armania's quest for Freedom & Democracy.


I hope they didn't leave discouraged. God-Speed to them as they learn how to fight for what is right!

Posted by Red Squirrel (Pamela Hall) at 11:56 PM No comments: