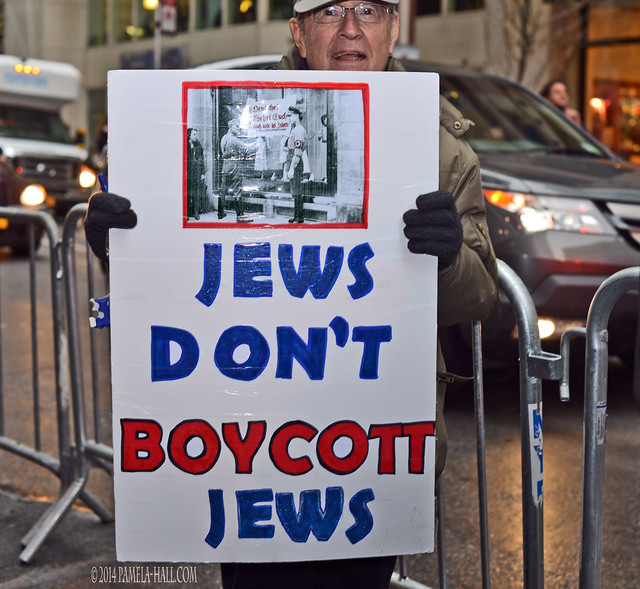 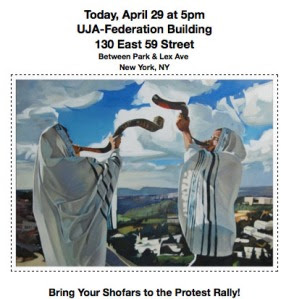 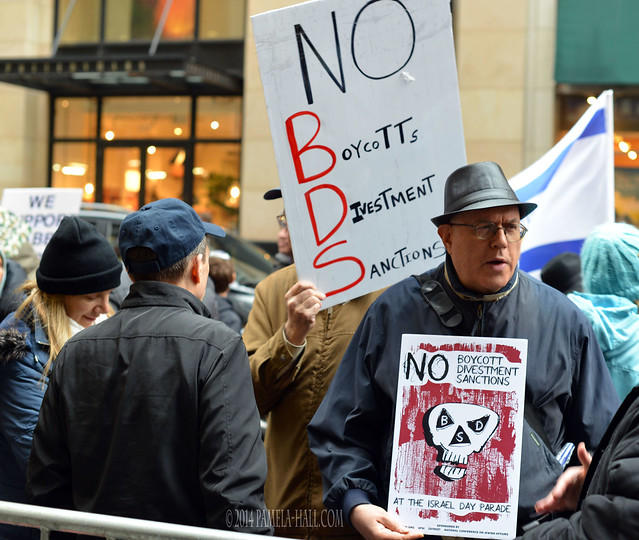 Israel Government Coalition Knesset Chairman, MK Yariv Levin, wrote "I am deeply moved... by the courageous stance of friends of Israel involved in the parade, calling to delegitimize those who delegitimize Israel. It is not logical or reasonable for Israel supporters to condone, overlook, or indirectly cooperate with BDS (boycott, divestment and sanctions against Israel) groups..."


The UJA-Federation / JCRC is permitting the following anti-Israel groups to march in the June 1, 2014 Israel Day Parade in NYC:


1) Partners for Progressive Israel lists on its website Israeli companies that it wants you to boycott, including Ahava cosmetics, SodaStream and wine from nine Israeli vineyards.

3) B'Tselem produced the anti-Israel video shown at the infamous "Israel Apartheid Week" events held at Universities worldwide. The chair of B'Tselem's board, Oren Yiftachel, has publicly called for "effective sanctions" against Israel.B'Tselem is a major grantee of the New Israel Fund. 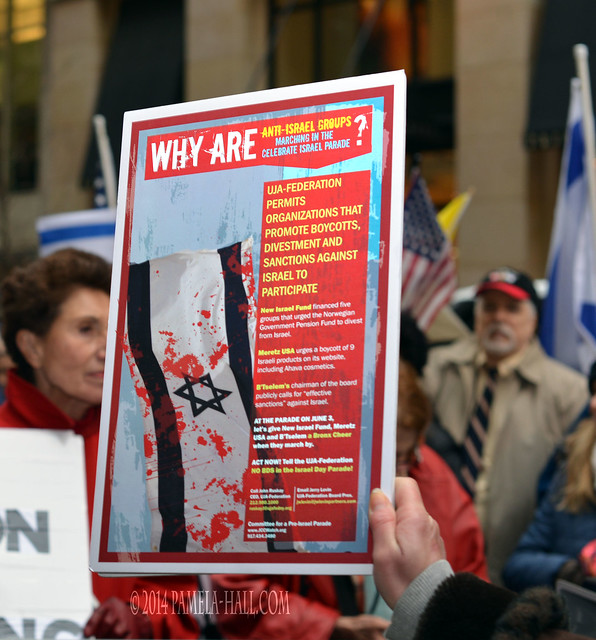 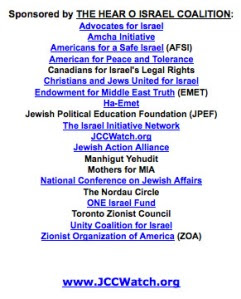 Posted by Red Squirrel (Pamela Hall) at 11:04 PM No comments:

.
According to Adalah's web site, they've been showing up outside Zabars... A LOT... There were many familiar (hostile) faces.... These Lib/Prog/Commie/Leftards proudly and  regularly protesting anything to do with Israel. This particular day they were on the Upper West Side, preaching their anti-Zionism "to the choir". And as a friend pointed out, "They look exactly like you think they would.  Not to mention Code Pink and SEIU joining in." 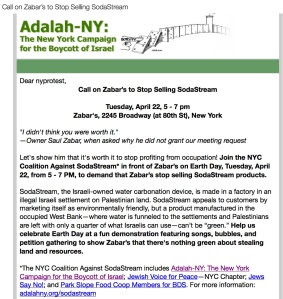 I was not aware of any counter protest to their usual anti-Israel lies and propaganda, but it was the last night of Passover. Most likely this night was chosen for that reason. This way their Anti-Zionist/Anti-Semite protest, sing-along (and lecture) could proceed without an informative opposition to expose them. (Or so they thought)
I missed one counter protestor who informed me that he got off the subway at 79th street and jumped into the middle of thir protest for a couple of minutes. He  asked them, "Why they were not Boycotting the Arab/ Muslim beheaders, the abusers of women and young girls and homosexuals?" So Sorry I missed him. Wish I had been there to get that on film!

These video clips are a few snippets of what I saw and heard: Video of the Anti-Israel Protest outside Zabars-NYC . Upper West Side lib/prog/leftists protesting the very existence of Israel.

.
Part 1- Obnoxious Occupy Wall street type chants and sound bites, lies about "fakestine" and petitions based on those lies and propaganda against Israel and Soda Stream.


Part 2 begins with an obnoxious "Earth Day" aka Commie Day rendition of Beethoven's 9th. Then these tools chant (flip off the camera ) while passing out flyers and petitions filled with lies and propaganda against Israel and Soda Stream.

Part 3 catches a passer by heckling them and one tiny little lady putting a Leftist through an amusing description of Soda Stream...and then.... she refuses to sign his petition!

Click picture to go to Slide Show of pictures: 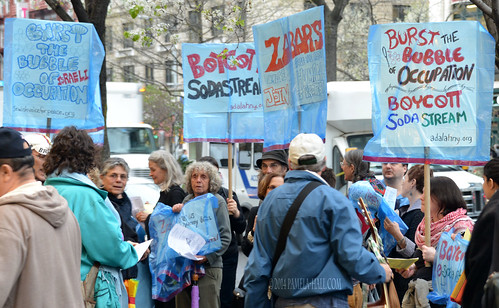 Found this report from Kate Havard of Weekly Standard :
‘Go to Hell, Anti-Semites!’, one reaction to anti-Israel protesters yesterday at Zabar's.

(I think this is Kate Havard on the right) 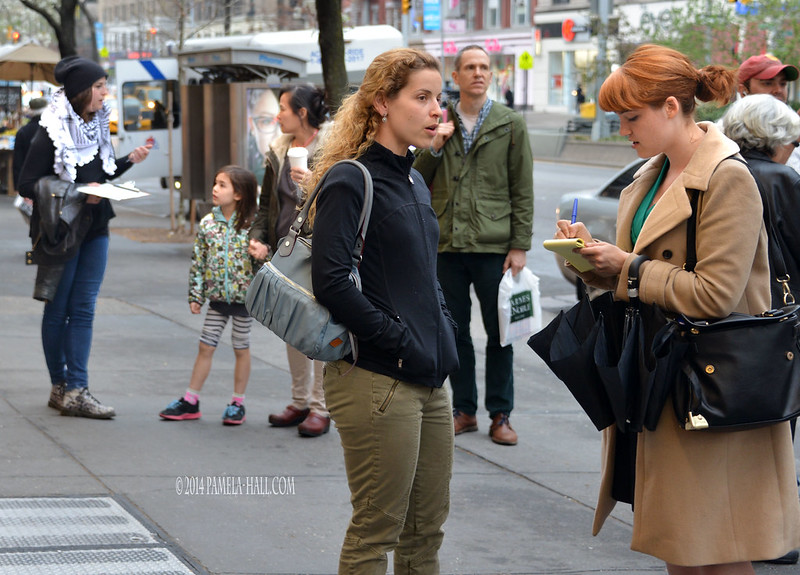 "Yesterday, on the last day of Passover, protesters surrounded the doors of Zabar’s—the iconic Upper West Side grocer famous for its knishes and lox—to demand the store stop selling the carbonated beverage maker SodaStream. The roughly 40 protesters, carrying guitars and signs decrying “Apartheid Soda,” represented a coalition of volunteers from Adalah-NY (meaning “justice” in Arabic), Jewish Voice for Peace, and members of the failed initiative to boycott Israeli products at the Park Slope Co-Op.

Some of Zabar’s customers appeared unaffected while others were clearly annoyed at the ruckus. “Go to hell, anti-Semites!” shouted one customer as he left the store, hoisting a SodaStream, an Israeli soda making device made in a factory in Maale Adumin, a suburb of Jerusalem. “You all go to hell!”

Alana Krivo-Kaufman, a representative from Jewish Voices for Peace, says protesters deliberately chose to target Zabar’s for a boycott because it has strong ties to the Jewish community. “Zabar’s is a beloved institution by those of us on the Upper West Side. They have a history of being a community influence,” she said.

But Pam Sporn, a BDS advocate, tried to deny the protest was anti-Israel. “There’s nothing in the BDS call that’s anti-Semitic,” she said, “There’s no hate speech. There’s no accusations at any individual Jewish person. I’m Jewish.” However, she also said her objection to Israel extended beyond the settlements and to the entire state of Israel. “Personally, I have a problem with any state being for any one religion or one group of people,” she said.

“Idiocy,” said Joe Steiner, a customer who said he’s been shopping at Zabar’s for 15 years. “This product is made in the West Bank. If it weren’t for them, those Palestinians would be starving. SodaStream pays them more than Hamas can. It’s good. This is ridiculous.”

Erica Gerson wasn’t shopping at Zabar’s today. But she crossed the street to speak out against the protest.  “My understanding is that SodaStream is good for Jewish and non-Jewish relations,” she said, “They pay Jews and non-Jews the same wages. They provide employment. And what could be better than working side by side?”

The protesters “are either crazy, anti-Semitic, or ill-informed,” she said, “If I didn’t own a SodaStream already I’d go in and buy another one.”

The protest cards they were handing out: 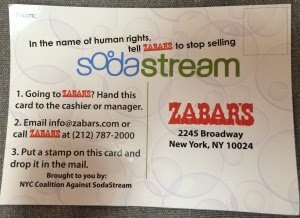 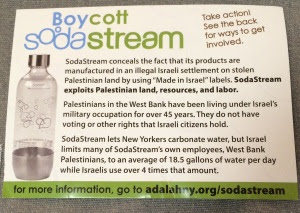 Glad to know that Zabars stood up to them. Mr. Zabar did not bother to meet with the protestors because, he said, "I did not think you were worth it". And one more Zabar's quote From Kate Harvard's article, "We sell food. We don't do politics" ! 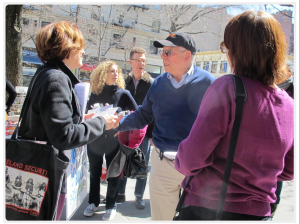 Glad to see this particular protest fall flat ..... perhaps they might add a few bubbles next time...  compliments of SodaStream....

Outside CPAC. March 6, 2014. Washington National Harbor. (Yes....It took me awhile to get this posted)

The National Security Action Summit of 2014 was an all day event adjoining CPAC 2014. This Summit was NOT INVITED to be a part of CPAC 2014.  A special event made FREE by EMPact America and co-sponsored by Breitbart News Network.
From The Center for Security Policy

"Today marks the beginning of a concerted effort to ensure that the American people have at least one political party committed to their security in an increasingly dangerous world – with competent leaders able to provide for it."

And that was just the Morning Session of outstanding panels that discussed what we must do about the threats facing our Nation. 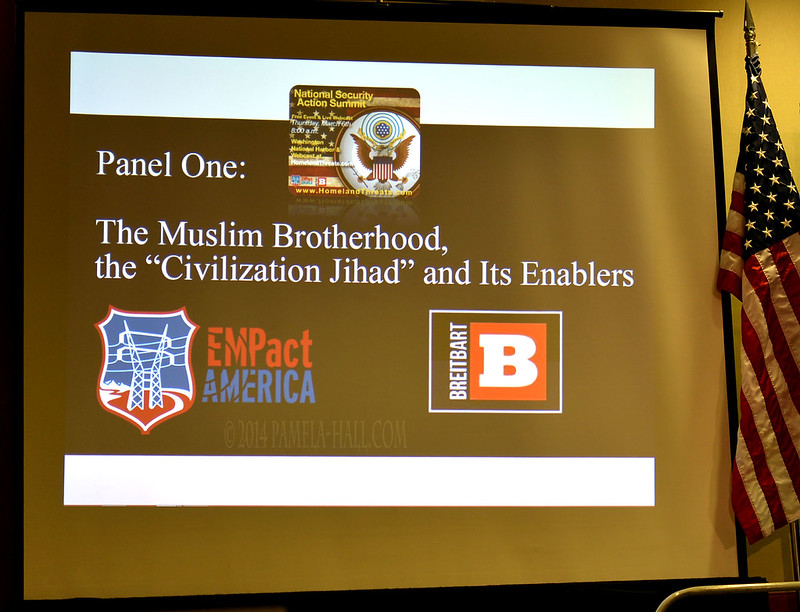 Many topics that included: 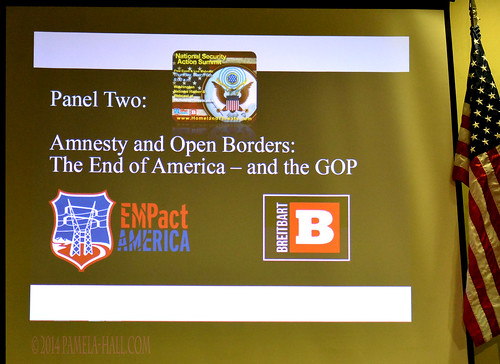 4. Russia’s invasion of Ukraine
5. Benghazigate and the hollowing out of our military
(just as China’s is growing more menacing by the day)

What follows are some video excerpts (11) that I compiled from the Morning Session. It began at 8 AM. First day of CPAC. I was pleased (energized) at that thought that I was to start the day off with this series of panels. (Unfortunately, I had to leave after Senator Cruz spoke.) 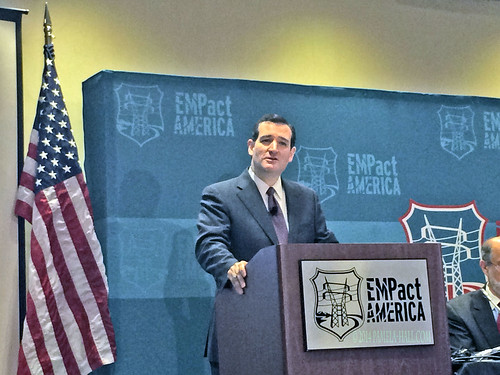 The VIDEO PLAYLIST of selected Speakers and Panels from Morning Session:


Watch the entire summit (from 8 am to 5 pm) at HomelandThreats.com

A sobering summit on the sad state of our National Security.

A few more pictures can be found in slideshow below, or click thru on the link:

Below is one of the books given to the audience gratis. A book filled with important details and facts exposing Grover Norquist's connection to the Muslim Brotherhood. Facts that have been ignored year after year by CPAC.

http://www.centerforsecuritypolicy.org/grovermustgo/
BTW- On Saturday, March 8th, Norquist moderated a panel on Unions and Right Work Laws. (More on this will be in my next post on CPAC) ---click on book covers to enlarge for better reading---

Posted by Red Squirrel (Pamela Hall) at 6:34 PM No comments: