Yes, we know Irene caused damage and sadly deaths in areas along the East Coast, where other hurricanes too often do the same, but if this was a NY State Lottery, we'd all be rich. This was an easy bet: Irene was not going to destroy Manhattan; and she didn't. But that didn't stop more businesses from taping up their windows

Irene was a bust. The rains and the wind went missing. Blew right over Manhattan. But, unfortunately, Bloomberg's Follies was the only show in town.

Waiting and watching. "Looking for the elusive IRENE".

Thanks to Mayor Gloomberg, the city was a ghost town.

Something as new as the taped up windows was garbage cans turned upside down (in anticipation of those winds that never came).

We get very high winds in Manhattan. OFTEN.  So why the upturned garbage cans. Why NOW?

People had to get creative with their garbage.

Otherwise, garbage in the sewers or simply dropped on the street...

When I started my walk-about, these 'soupy' hats seemed to be about the biggest mess I'd seen (along with garbage sitting on the upside down cans). And the Hurricane was suppposed to have HIT by now.

This Pedicab got creative. Parked at a local bar. He needs the theatres to make his money. No theatres. No traffic. Head for the saloon (if it was open)

Sunday was WORSE than Saturday. The Day of Reckoning and EVERYTHING seemed to be closed. Movie theatres, Broadway theatres, restaurants, CHURCHES (and it's Sunday).

These looked like such lucky folk. A nice hotel lobby to hang out in and have that cup of coffee..

But this poor fellow looked so forelorn

And then I realized some brave individuals had actually ripped down the ubiquitous tape (it was yellow here) TAPE barring us all from the subways. It was broken!

A stairway back up to 8th Ave

Food and drink? Compliments of Gloomberg. Not today, Gunga Din

The exit on the West side of the Avenue had unbroken PINK tape (whatever is the PINK for?)

At 42nd St and 7th. Cops. The only ones I'd seen today. Guess no one was gonna be ripping down tape here.

Today, even the McD's (along with the Starbucks) were closed

NO FOOD. There was NO PLACE for the tourists to get food.

Like a horse going to its stall, I would see people  hopelessly glued to the McD's

Today there was going to be NO SHOPPING. The Eagles, Forever 21 and the Disney store were all closed up. ( no Magical  Hours today)

So did Eagles (sandbagged its doors) but, WHAT A MESS!

Planet Hollywood got creative and did the dramatic wood-thing!

Not sure why someone tied up the can INSIDE the B of A:

Or WHY no one was allowed on the steps at the Victory theatre on 42nd St.

The streets were very empty

Til I was walking back to Duffy Square. I found Swedes who had just played some type of ball game.

Everyone kind of hung out here. Nothing else to do.

But the tables were locked up,. And the food stores were closed down.

Which left us to take pictures with the naked Cowboy. Again.

As the Swedes jogged by

And people waved at themselves in the Forever 21 picture cam

This taped up restaurant was east of Times Square. It just made NO sense. But, then Bloomie worked the Fear  to such a pitch that there was no logic really as to why or where to tape

So, NYC has now become the town that Mayor Gloomberg Shut Down. TWICE

Gloomberg's Nanny State Rolls On and On, even when the subways don't.

And as King Gloomberg has so famously said, "You don't like it, Boo me at a parade" 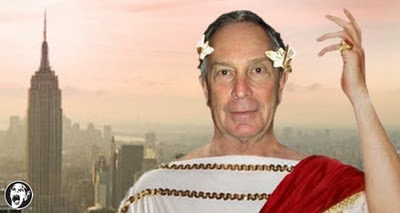 
UPDATE: And here is my favorite moment on Day 3. I ran into these German Tourists. Monday AM. They said they made the T-shirts. Considering the tourists all got stranded in Manhattan by Gloomberg and Co, at least they were still smiling (trust me, these kid were smiling) Unfortunately, I neglected to get their lovely faces as I chased after them. 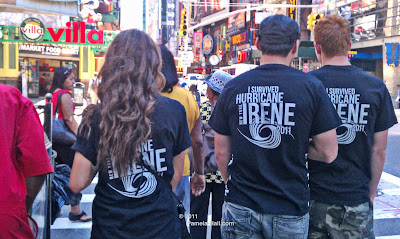 Caught up with them at 42nd St and 8th (just before the light changed.) 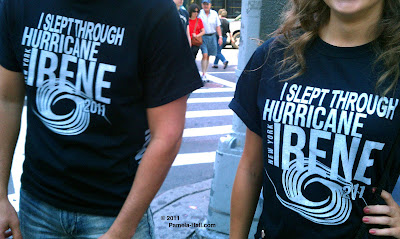 Posted by Red Squirrel (Pamela Hall) at 11:52 PM No comments: