Only one week from the SIOA Rally to Stop The Mosque at Ground Zero, Pamela Geller also talked with Bat Ye'or about how the Left, the West, is helping, not stopping the Islamization of the West.

And read more about Bat Ye'or at Atlas Shrugs
Posted by Red Squirrel (Pamela Hall) at 9:51 PM No comments:

Da'wah on the streets of Manhattan....

The purpose of da'wah is NOT to learn about Jesus!

"In Islamic theology, the purpose of Da‘wah is to invite people, both Muslims and non-Muslims, to understand the worship of Allah[4] as expressed in the Qur'ān and the sunnah of the prophet, as well as to inform them about Muhammad.[2] Da‘wah produces converts to Islam, which in turn grows the strength of the Muslim ummah.[2]"

Dawah or Call towards Allah, is the means by which Prophet Muhammad spread the message of Quran to mankind. After the Prophet, his followers or Ummah assume the responsibility of the Dawah to the people of their times[2].

WAKE UP, AMERICA. The enemy is here. Along 8th avenue.... in mid-town Manhattan...in lower Manhattan.... store after store, taxi after taxi...ALL AROUND THE TOWN! 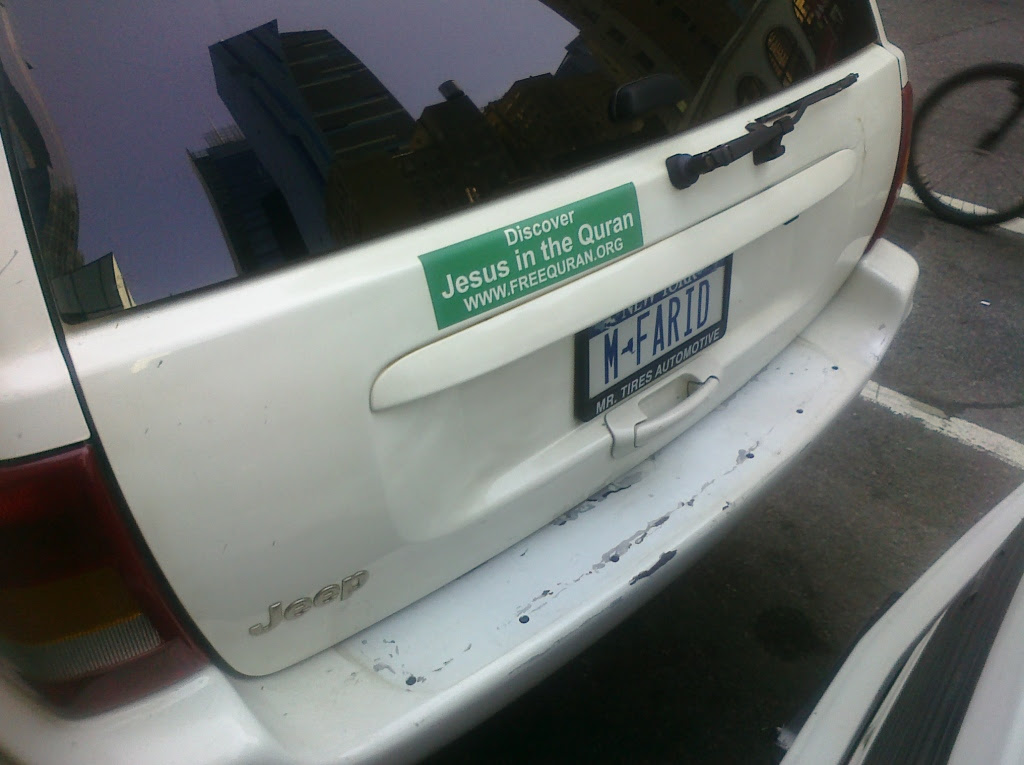 "Discover Jesus in Quran?!" The infidel has received the "invitation " to Islam...now what? 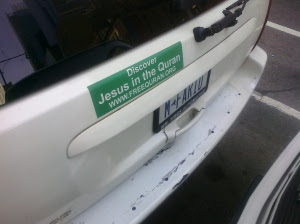 Posted by Red Squirrel (Pamela Hall) at 12:21 PM No comments: 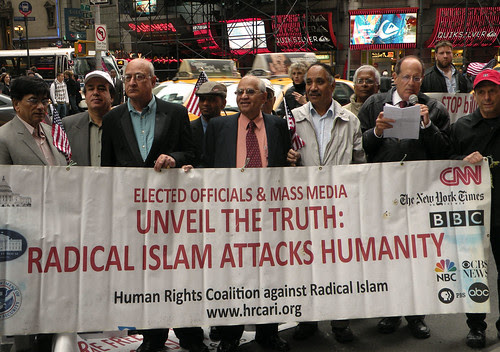 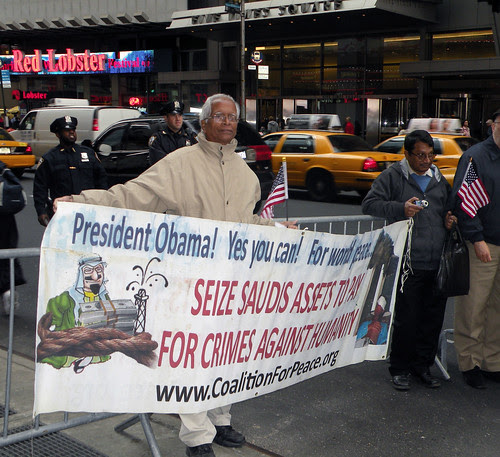 Even though the media and our president... all are afraid to talk honestly about the Times Square bomber and the ideology that motivated him (and too many others like him around the world) to murder and to violate the Human Rights of others. 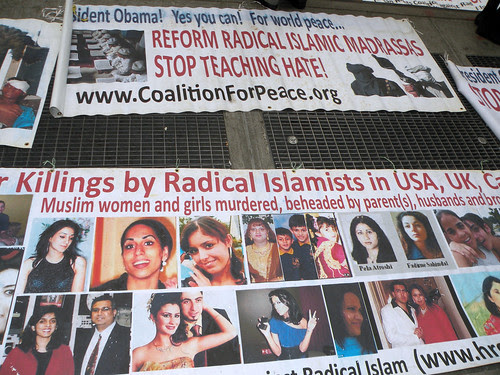 We must no longer remain silent.

This coalition of concerned citizens came to Times Square, to walk from 42nd St to 45 st st (the site of the failed Times Square bomber) 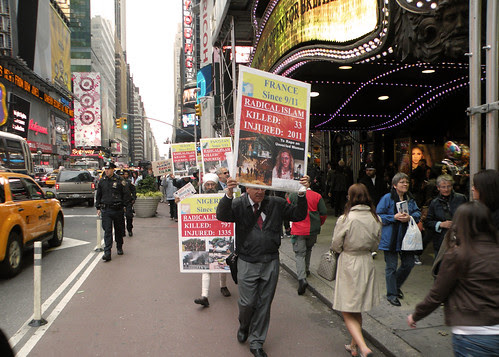 They carried signs that the media remains afraid to talk about. 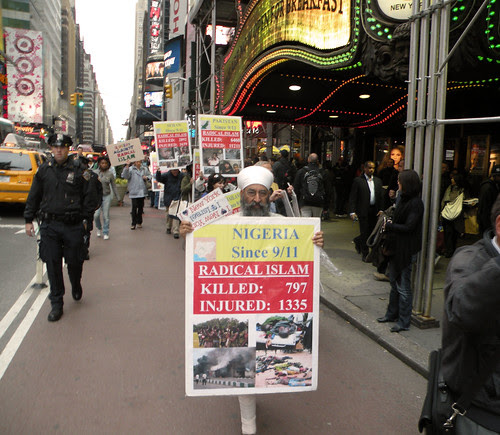 These are murders and human rights violations committed by the followers of Islam.

We must fight terrorism through education.

We can no longer remain silent!

Posted by Red Squirrel (Pamela Hall) at 11:34 PM No comments:

May Day, 2010. The Illegals were out as usual being manipulated by the Commie insurgents to break America from with-in. 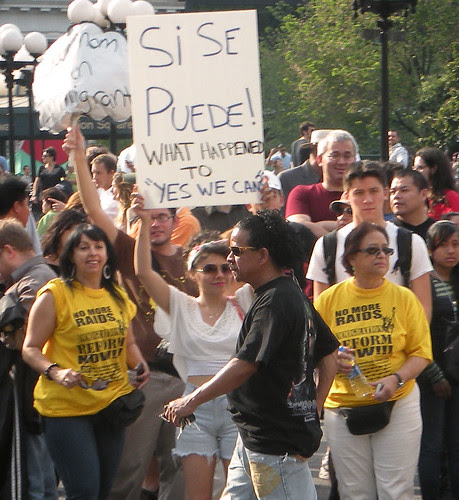 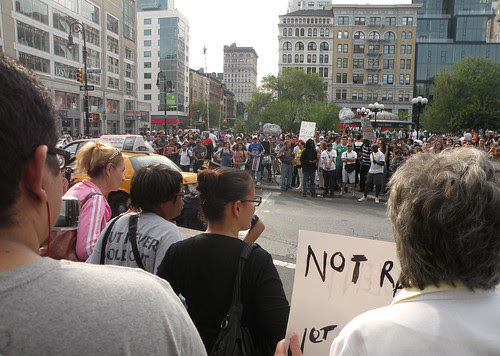 What about about our laws? The illegals and the anarchists are of one mind, " Laws! We don't need no stinkin' laws". 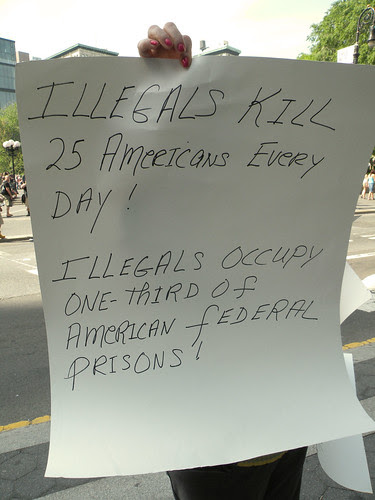 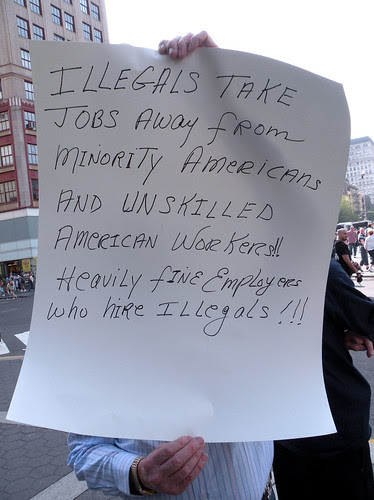 But Americans (of all races, as well as legal immigrants) countered this hateful anti-American rally with a patriotic reminder that to be a citizen of ANY country, you must respect the law. Otherwise you will have anarchy..... 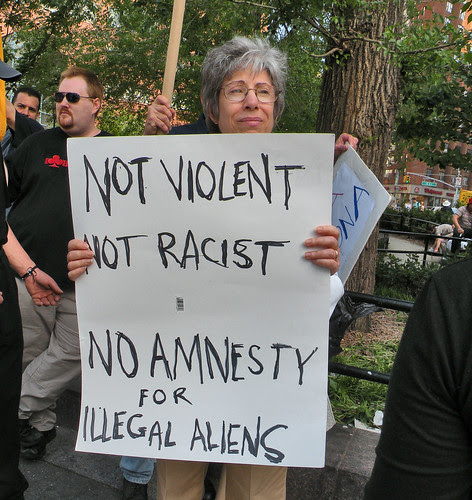 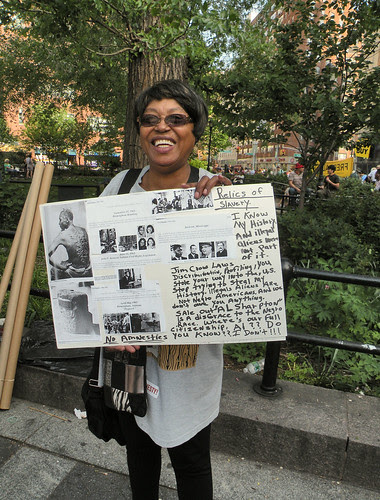 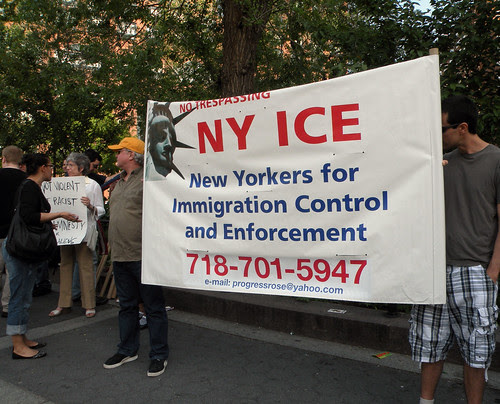 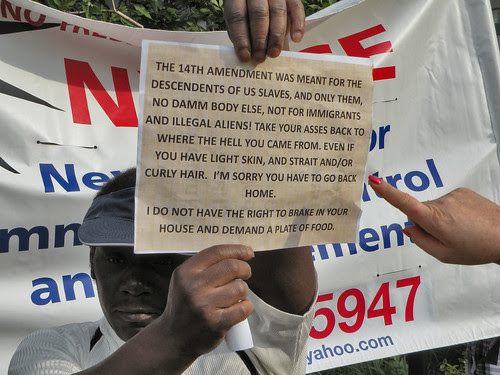 While reading their signs, we wondered, "Why do they even want to live here, when they resent all things American so much ." 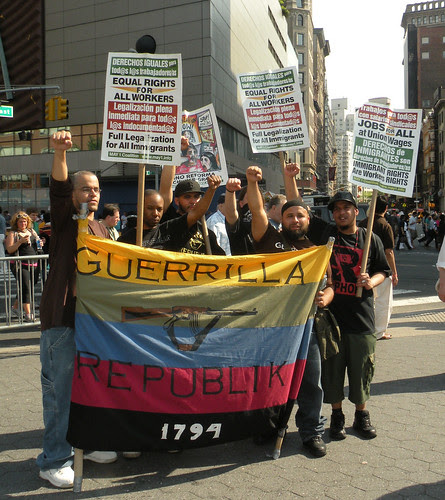 Another observation, apparently, the police decided for the first time that we can remember, to have next to NO presence and as the illegals and the Truthers became aware that the police were in absentia (the couple of auxilary police looked dazed) so we were swamped at different times. These few officers joined the Auxilary Officer you see close to the camera (briefly) near the end of our two and half hour counter-rally....and then disappeared....We were on our own. Very, very odd. 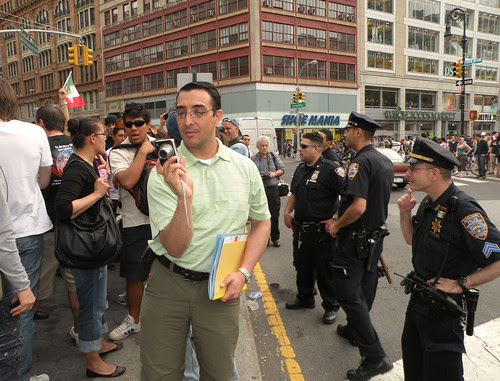 Slide show of both sides:


Resentment and entitlement are not winning arguments for citizenship. 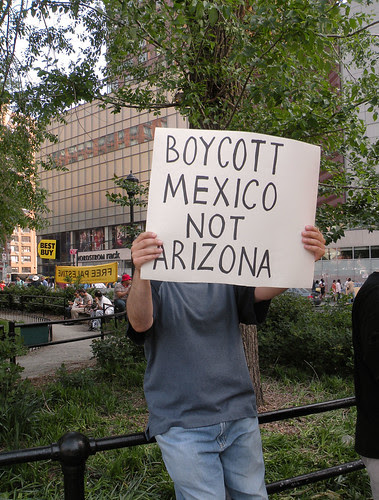 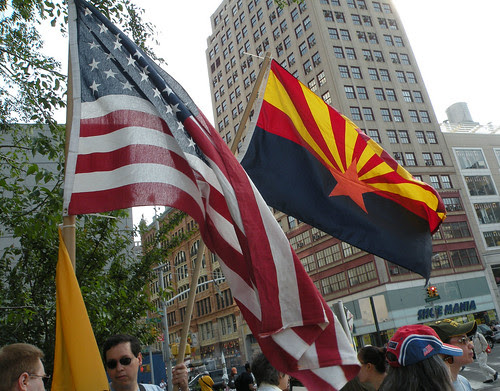 Added to the mix, since this is Union Square, the ubiquitous 9-11 Truthers / We are Change/ End the Fed nut-Jobs (claiming to be John Bircher 'conservatives') were on hand mixing it up with everyone.... 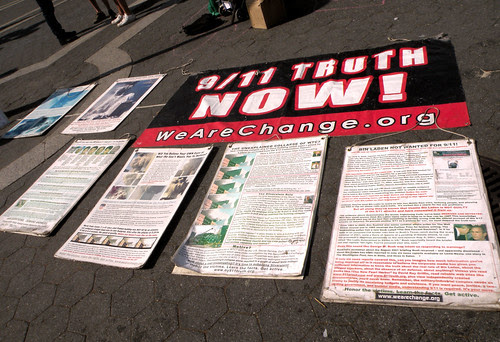 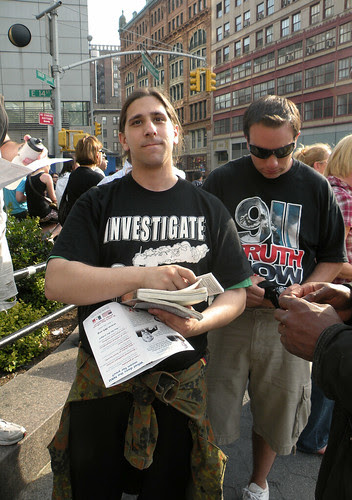 Part 2:The Angry Commie vs the Truthers... Since this is Union Square, the ubiquitous 9-11 Truthers / We are Change/ End the Fed nut-Jobs (claiming to be John Bircher 'conservatives') were on hand to debate this very angry Commie.. He was ballistic that HIS day, May Day, was being used to protest the violation of our immigration laws!

Part 3:Two Immigrants dialogue....A legal Russian immigrant talks with an illegal immigrant surrounded by a curious crowd. ( re: sound. My good camera (a Canon HD30) battery went dead so I had to use my Nikon p 80)

Part 4: One of the organizers of the illegals came over to chat. Since there was no police presence, the usually keeps us all on our own sides of the street, the Leftists kept coming over to our side. Twice (in the video) you can see tthe illegals go after our people when they attempted to do the same, go to their side to talk (to build some bridges) instead we were assaulted. This is excerpts of the responses from the leftist. She was questioned at times by the a legal Russian immigrant. (who is assaulted by the illegals after they tell her she's not an American because she has an accent) And of course one of the black women in our group was told she was on the wrong side of the street. They definitely gave her a hard time, but she gave it right
back!

Part 5: The Patriots and Illegals manage to exchange their points of view in spite of the noisy crowd. This Pro-American counter-Rally (of all races and as well as legal immigrants) was a patriotic reminder that to be a citizen of ANY country, you must respect the law. Resentment and entitlement..... Why do the illegals even want to live here, when they resent all things American so much .

FYI: If you aren't familiar with the 9-11 Truthers etc, arecent post on the We Are Change-Gang (in Times Square)

There was, as usual, the Anti- Israel crowd on another corner.....tediously spreading their lies... (pictures soon)
Posted by Red Squirrel (Pamela Hall) at 12:27 AM No comments: 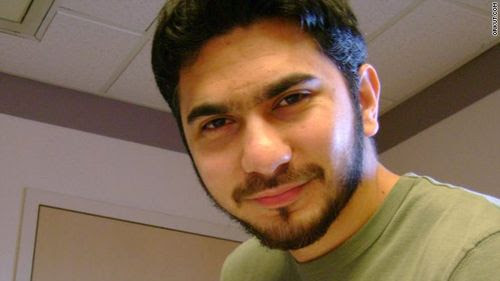 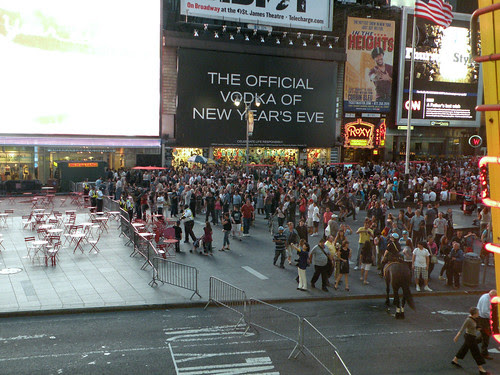 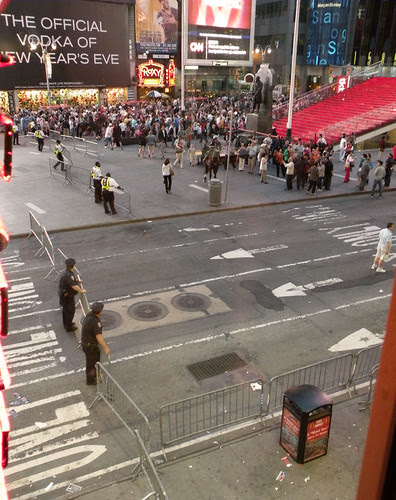 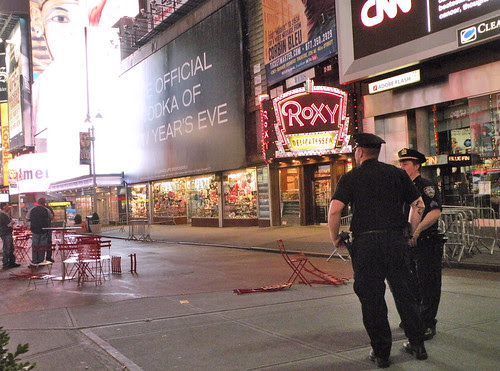 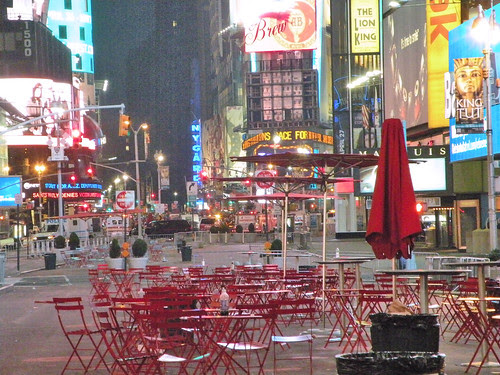 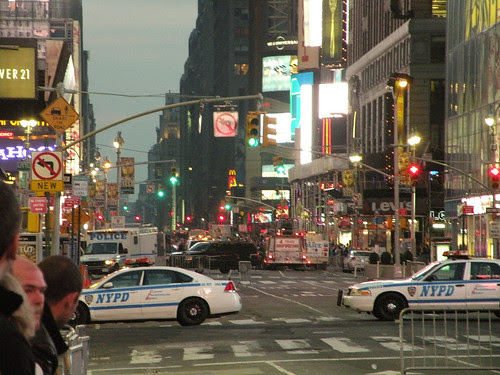 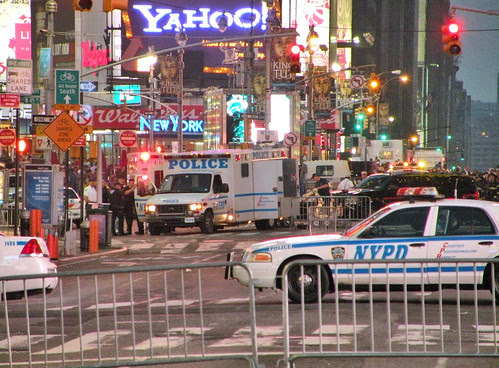 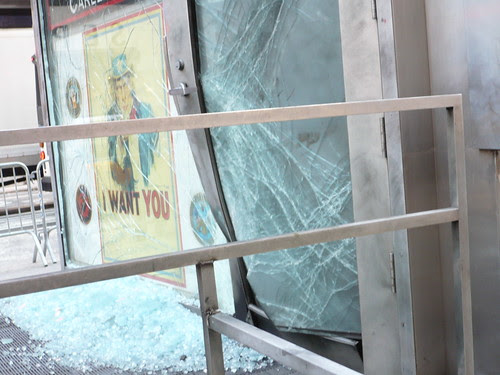 Posted by Red Squirrel (Pamela Hall) at 12:59 AM No comments: