What would YOU do if you knew exactly when a bunch of anti-American, anti-troop Leftists were planning to block the entrance to the Recruiting Station, pretending to be kind ol' Grannies and calling it a Crime Scene!

Claiming they really "Support" our Troops?

Would you ignore it? Think it doesn't matter?

Today, three of our patriots stood up to these anarchists. (many of these were the same Leftists who marched against Israel the day before)

While our New York Police, did basically NOTHING but 'whine' as the commie-tools wrapped police-tape around the whole Recruitment Station

You'll see in the videos and the pictures how the Leftists creep closer and closer to the entrance until our Patriots were flat against the building;

Patriots were boxed-in by the tape and our enlisted men couldn't enter the building when finally these vile anarchists blocked the door at about 2 PM (this all started at Noon). It took our yelling at the police and demanding that they do something before they would notice what had happened. They were a bit busy chatting each other up...just hanging out til we yelled that the leftards were blocking the door.

"Are you going to do NOTHING?!" Finally got them to move...

AND, that also got the grannies what they wanted ... which was about 6 of them were arrested. They love the press. That why they were there!

Then there were the usual accusations towards the Patriots... like " snitch"? (for yelling at the police)and Fascist...whatever.

The police demanded that our Patriots leave the area (one of the Patriots broke the tape that the Leftards had wrapped around themselves in front of the door) and, of course, they tried to get us to stop taking pictures.

It's time for all Patriots to demand the police stop looking the other way. There were so many police, suits, captains all standing around as the Leftists crept closer and closer to the door. And even though some officers made gestures at controlling them, it was to no avail. No matter what they told the Leftists ...like... you can't do that with that tape, etc..... the Lefties just kept wrapping and wrapping tape...

The Anarchists continued wrapping tape unobstructed and we KNOW our Patriots would have been stopped and removed from the area if they had tried a comparable action while protecting the Recruitment Station!

It's time to re-group! It's not enough to stand around with our flags (that just make the leftards look patriotic). Yelling at the Anarchists does no good cause the cops would move the Patriots... far...far away....

Wake Up, America! We need to EDUCATE the public. Flyers. Conversation! One young Marine in front of the Recruitment Station had to listen forever (politely) to a 'grannie" while she pleaded with him to acknowledge how wrong it was for him to go to high schools etc...that he was supporting killing...

Why should he have to deal with that? And the public passing by only gets the LEFTY flyers…

Come on Patriots. We should be out there walking around with flyers and talking to the public (politely) not the Leftards.

IT’S TIME TO STOP The MADNESS!

Heads up: There are a lot more pictures

And for the curious, below is the email the ‘grannies’ sent out for the event-

Posted by Red Squirrel (Pamela Hall) at 6:27 PM No comments:

March 20, 2009- A familiar band of Anti-War Leftists were at the Times Square Recruitment Station and they had the usual demands only an anarchist could love. Happily, our Eagles were back and the anarchists were kept far,FAR away from the recruitment Station (as video and pictures will reveal) Great fun watching the Leftists as they preached and shouted to THEMSELVES.

Heads Up- Elaine Brower and her fellow anarchists don't believe in allowing any 'unapproved' photography on a public street at a public rally so this camera was harassed and blocked.The camera has to keep moving in Parts 2 and 3. And it took the police to stop the harassment since the "Greenhats" ...the Legal Beagles were observing and permitting their "wards" to break the law...

Barack Obama says he will:
* leave 80,000 troops, thousands of private contractors, and 17 permanent bases in Iraq;
* send 30,000 more troops into Afghanistan , leading to more killings of civilians;
* keep sending robot drones over Pakistan, killing more civilians;
* deploy nuclear carriers with enough firepower to annihilate any country in the Mideast;
* support the Israeli siege on Gaza;
* keep in place the “secret rendition” program which Bush used to torture detainees;
* keep the government spying on citizens and continue Bush’s “state secrets” justification;
* increase the U.S. military by 92,000 troops, sending more to die for empire;
* refuse to investigate & prosecute the war and torture crimes of the Bush regime.

They can whine all they want but what we saw was :

The Patriots who proudly stood up to these anarchists.

Perhaps this might be a glimmer of real HOPE on the horizon.

We Must NOT Be Silent.

Let's start by getting this scum, these hate-America Leftists OUT of our schools!! Semper Fi!!

To read more on WHO IS the REAL Matthis Chiroux. Go here>>

Posted by Red Squirrel (Pamela Hall) at 6:08 PM No comments:

Eagles Support the Troops in Poughkeepsie

Every Saturday in Poughkeepsie the Eagles gather to Support our Troops across the way from the regular Moonbat Brigade (that often has the infamous Pete Seeger in tow) Though not at this particular event...guess he took the weekend off.

More pictures of the Eagles are here

Moonbats are so in denial (as always) HELLO! You voted for WAR!

The rest of these useful idiots are here>>

by redsquirrel08
Posted by Red Squirrel (Pamela Hall) at 8:49 PM No comments:

Anderson is the focus of a ‘vigil’ outside Israeli consulate as the Leftists spew lies,lies and more lies…

by redsquirrel08
Posted by Red Squirrel (Pamela Hall) at 12:39 PM No comments:

You name it...The Lefties were "anti" whatever! If it smelled or walked like patriotism and their agitators were there as usual to create confrontations (it's call street theatre)


an anti war, america, israel rally in times Sqaure (8-2-08)
Uploaded by vigilantsquirrel
Posted by Red Squirrel (Pamela Hall) at 12:01 AM No comments:


Adalah, I Heart 'pali's and Leviev: 2-07-09
Uploaded by vigilantsquirrel 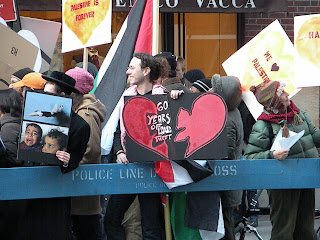 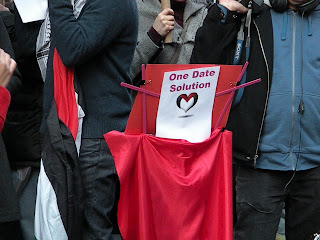 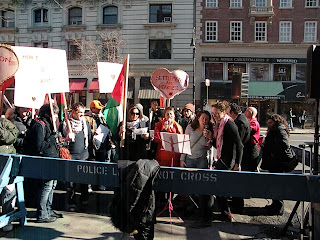 Those 'wild and crazy' pali-lovers and St Valentines Day. Too weird....too rude...and off course Al-Jazeera TV LOVED it. 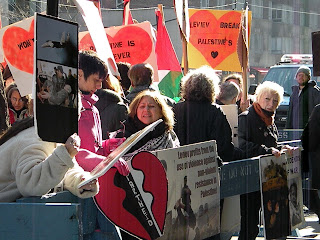 And OF COURSE, there were plenty who know the truth: Am Yisrael Chai!! 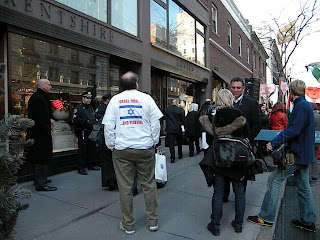 To see the rest of the pictures go here>>

by redsquirrel08
Posted by Red Squirrel (Pamela Hall) at 8:21 PM No comments: