Rise and Resist Marxists Demand: Kill The Filibuster (for now)

"The filibuster, is a longstanding Senate tradition requiring 60 votes in the 100-member chamber to advance a bill, effectively allows the minority party to block certain legislation."

The "Progressives" claim Killing The Filibuster is necessary to STOP the Republicans, who only care about power and MONEY. 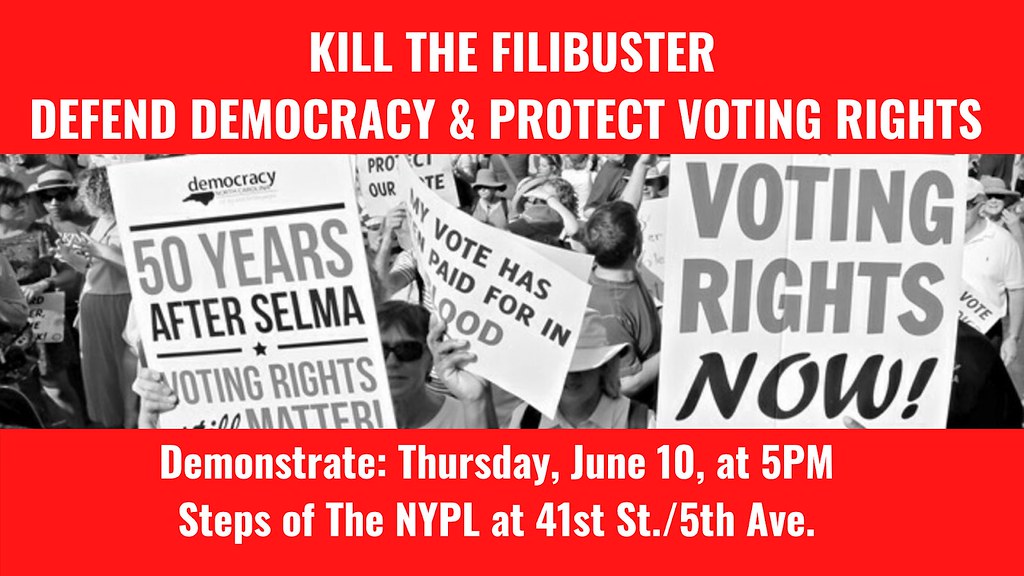 Rise and Resist - NY Marxists gathered to rant and chant against the supposed disenfranchisement of people of color. 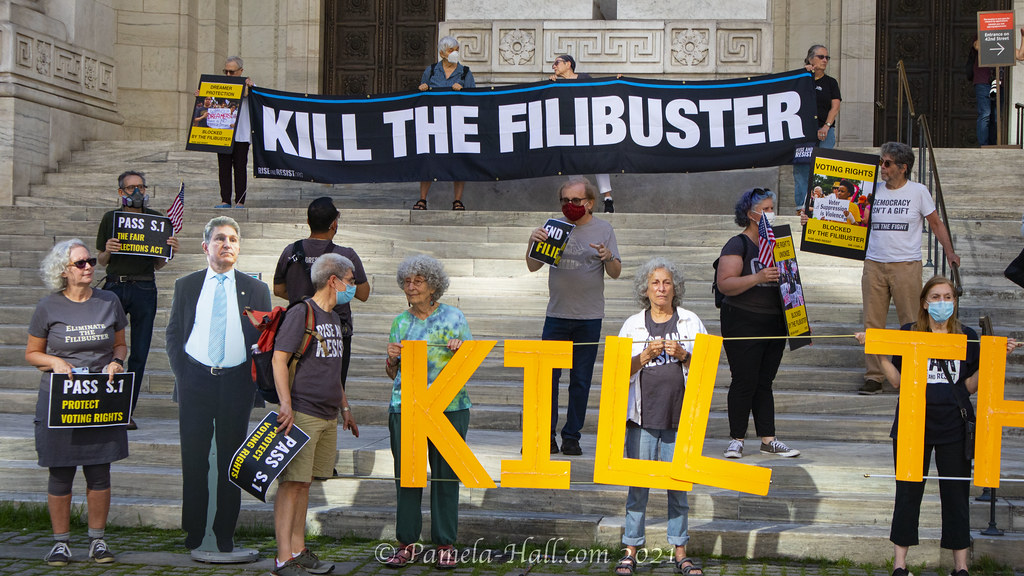 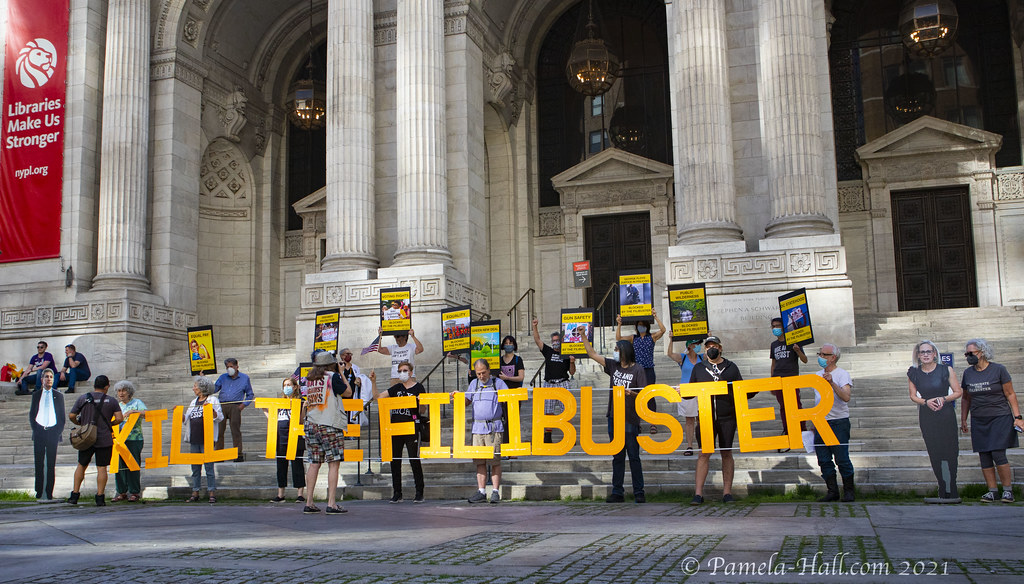 Sen. Joe Manchin and Sen. Krysten Sinema angered the Marxists so much that NO EXPENSE was spared creating two life-sized card-board type models. 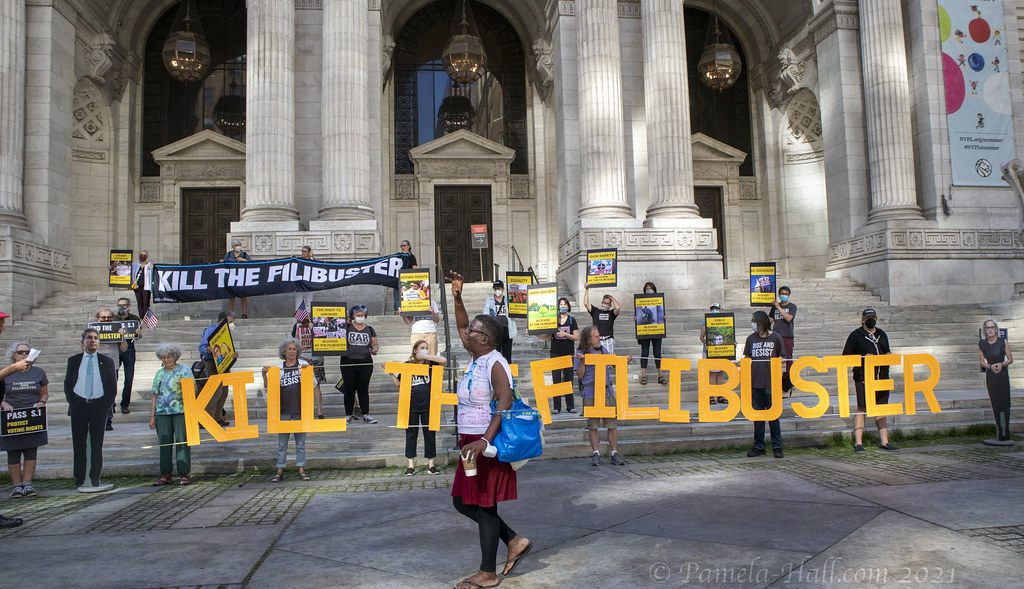 The chant leader, Jay Walker of LGBTQ & Gays against Guns, marched back and forth, never giving a glance towards a black heckler who seemed to be challenging the Rise/Resisters. (I was never was totally sure who she was with since she was difficult to understand.) What I heard her say: "Joe Biden is a Democrat. White Republicans. Justice, Justice. We The People" and my personal favorite, "THE PLAGUE. THE PLAGUE !" 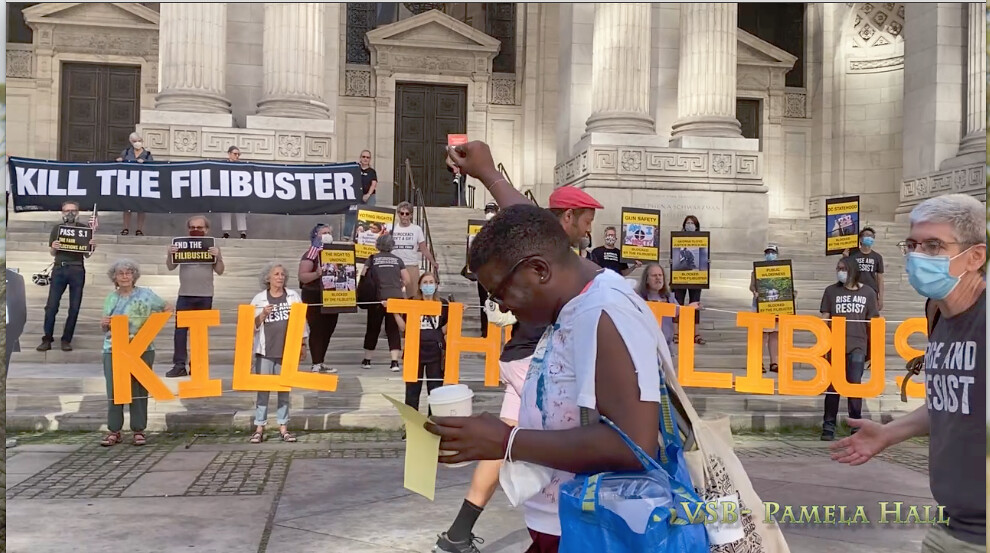 Presuming she wasn't WITH them, they wisely handled her with good nature. 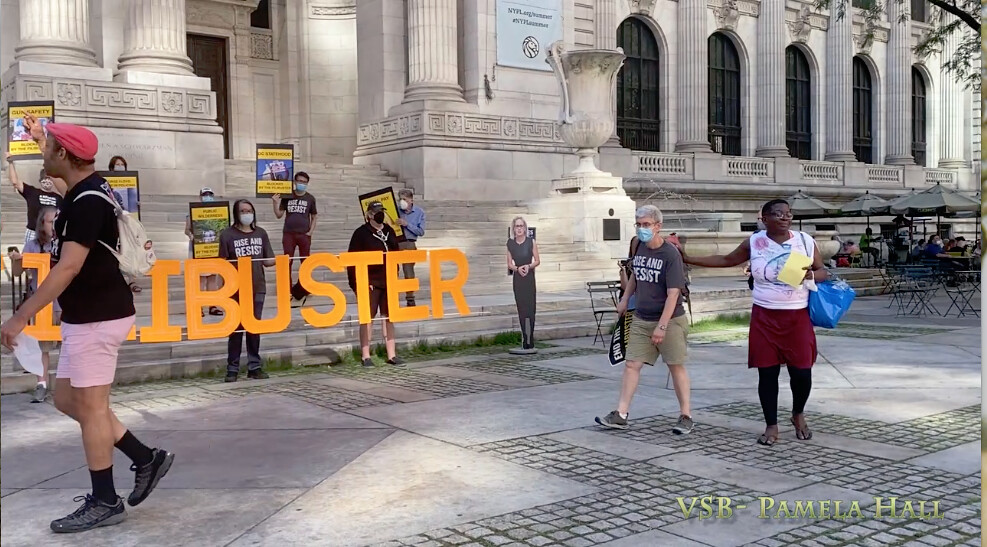 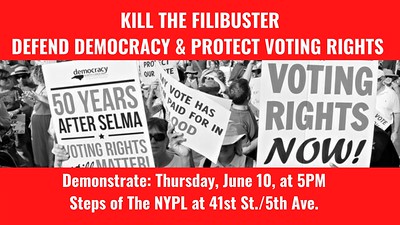 Video Part 1 CHANTS. Jay Walker lead the chants: "When voting rights are under attack, whatta we do, stand up, fight back; Voting Rights are Civil Rights; Voting is a Right, Not Just for the Rich and White; Same Day Registration; End purges of Voter Rolls"

.Video Part 2 HECKLER cancelled out most of what Jay Walker was shouting to the crowd on the steps. But I did hear him say: "End Voter Suppression; Get money out of politics; on-line voter registration; same day registration; get ... money out of politics!" WHILE she heckled with "Joe Biden is a Democrat. White Republicans. Justice, Justice, We The People" and "THE PLAGUE. THE PLAGUE !"

Until the Democrats control the votes in the Senate they will no longer be enamored of the filibuster (even though the Dems used filibuster 327 times compared to only once by the GOP in 2020). However, with the current 50/50 split, they now claim the filibuster to be a tool that ONLY the Repubs will use to shut down 'comity'.

Mazie Hirono, reacting to Kyrsten Sinema's op-ed opposing reducing the filibuster's 60-vote threshold, said Dem priorities will be stymied. "So if we don't make the changes to the filibuster, then I think we are going to look at losing the House and Senate, anyway," Hirono said.

Even if Kill the Filibuster is achieved, I doubt the Democrats would let its demise be permanent. As long as there is a minority party that could muck up the Dems lofty plans, the filibuster will surely RISE again. 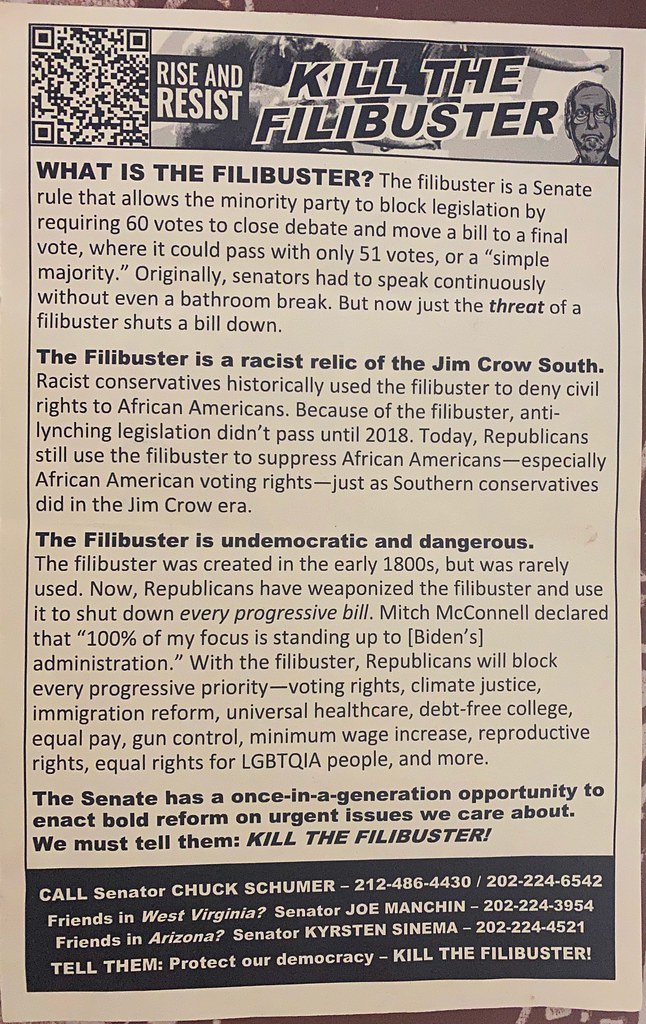 Meanwhile, in 2021, Sen. Sinema has said, in SUPPORT of the filibuster:

“When you have a system that is not working effectively — and I would think that most would agree that the Senate is not a particularly well-oiled machine,” Sinema said. “The way to fix that is to fix your behavior, not to eliminate the rules or change the rules, but to change the behavior.”

But WaPo has said of the stalemate:

The Senate Republicans have shown no sign they are about to change their behavior. When it comes to the key issues facing the country — from saving democracy to tax reform to climate change — it will take a rules change: eliminating or at least modifying the filibuster to put the burden on the minority instead of the majority, to give at least a spur to cooperation." (Wa Po)

There is ONLY ONE Solution:
For a "fair and equitable future", free of the bonds of capitalism,
... we must listen to their 'leaders' ... 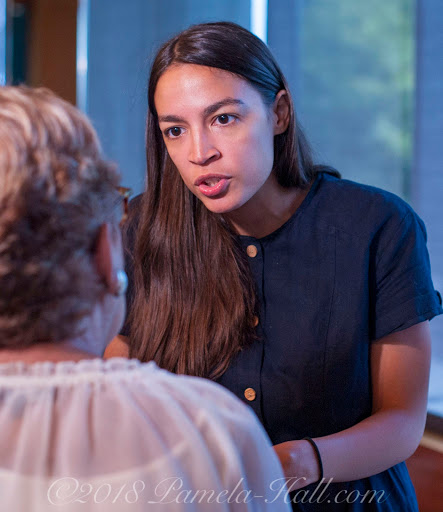 They WARN:  "The filibuster is undemocratic ... and dangerous!"

Posted by Red Squirrel (Pamela Hall) at 9:08 PM No comments:

On June 15, 2021, an enthusiastic crowd spent an evening with the controversial  Pastor Artur Pawlowski. [His ministry is in Calgary, Alberta, Canada] The evening was sponsored by a local group, FEC United and patriot, Diane Atkins. 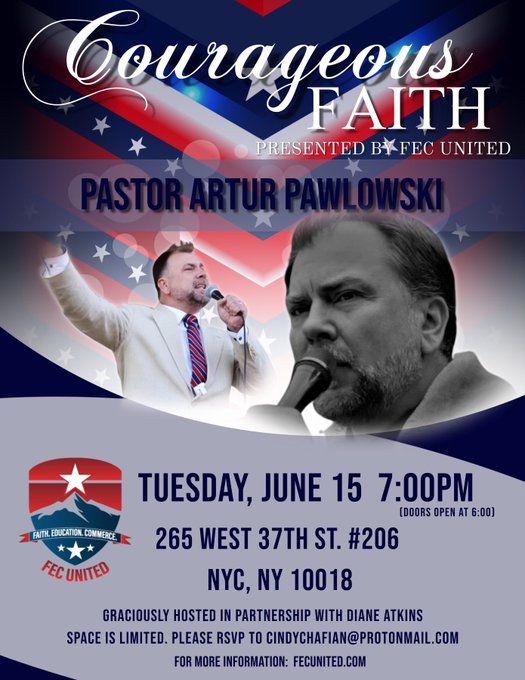 The small room was PACKED (and confidently UNMASKED.) They could have used a larger room (if it had been available) as there was spill over outside the door, standing in the narrow hallway. Inside, the room was warm and tight, but generous and welcoming as the pastor spoke for approx 90 minutes. 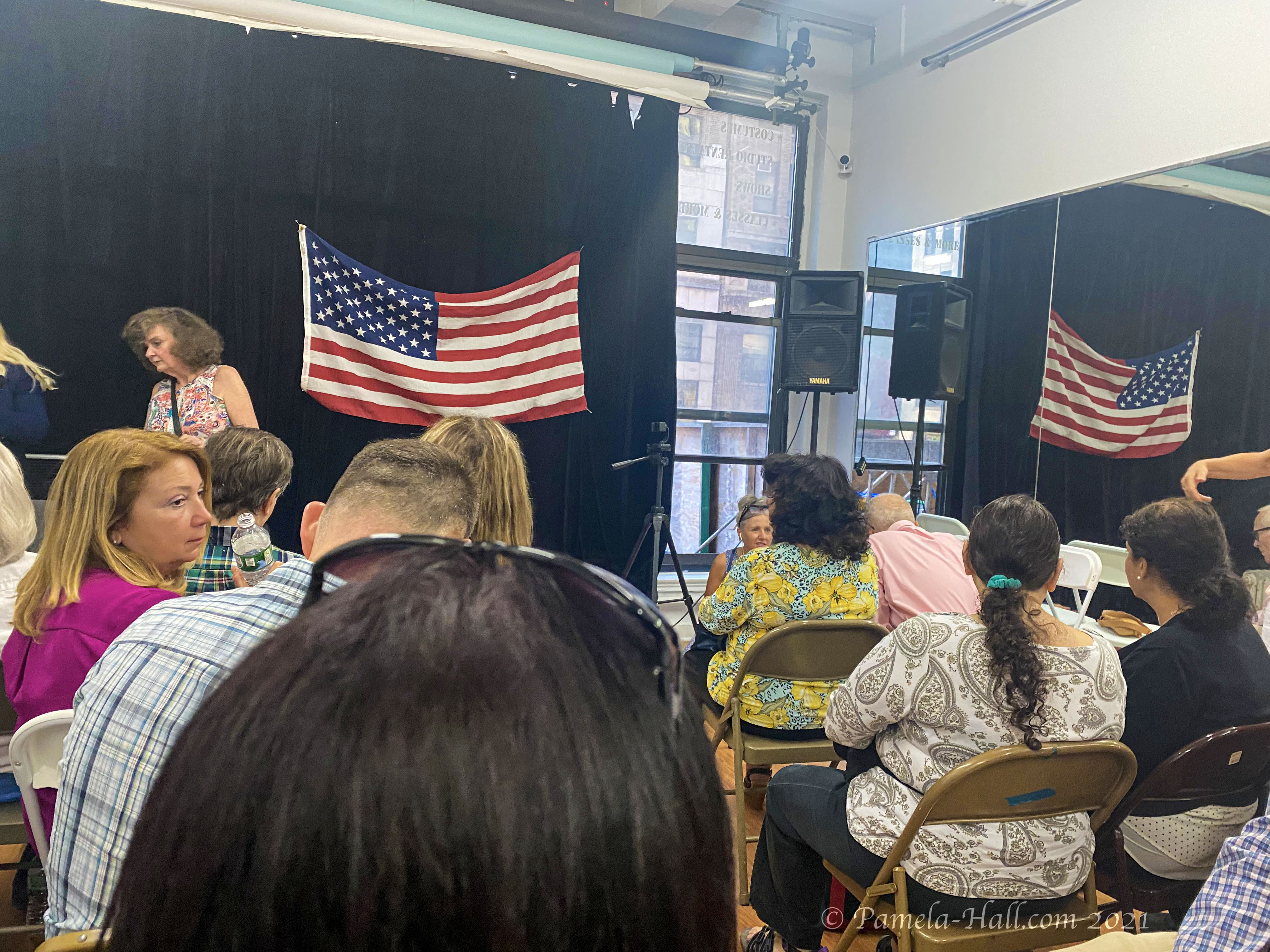 While people like Pastor Pawlowski are punished with brutal arrests and outrageous fines, we should learn from his example: we must resist this tyranny.

"Canadian police tried to shut down a POLISH church on Easter as he declared "NO NO GET OUT GET OUT!"  The Polish have a PROFOUND understanding of totalitarianism (fascism, communism) and sent the police away!"

He spoke of how urgently we need to commit to defending our imperiled rights from progressive, totalitarian governments run amuck. They infringe world-wide upon our rights to assemble, to worship, to sing free of muzzles and lock-downs.[Artur Pawlowski @ArturPawlowski1] 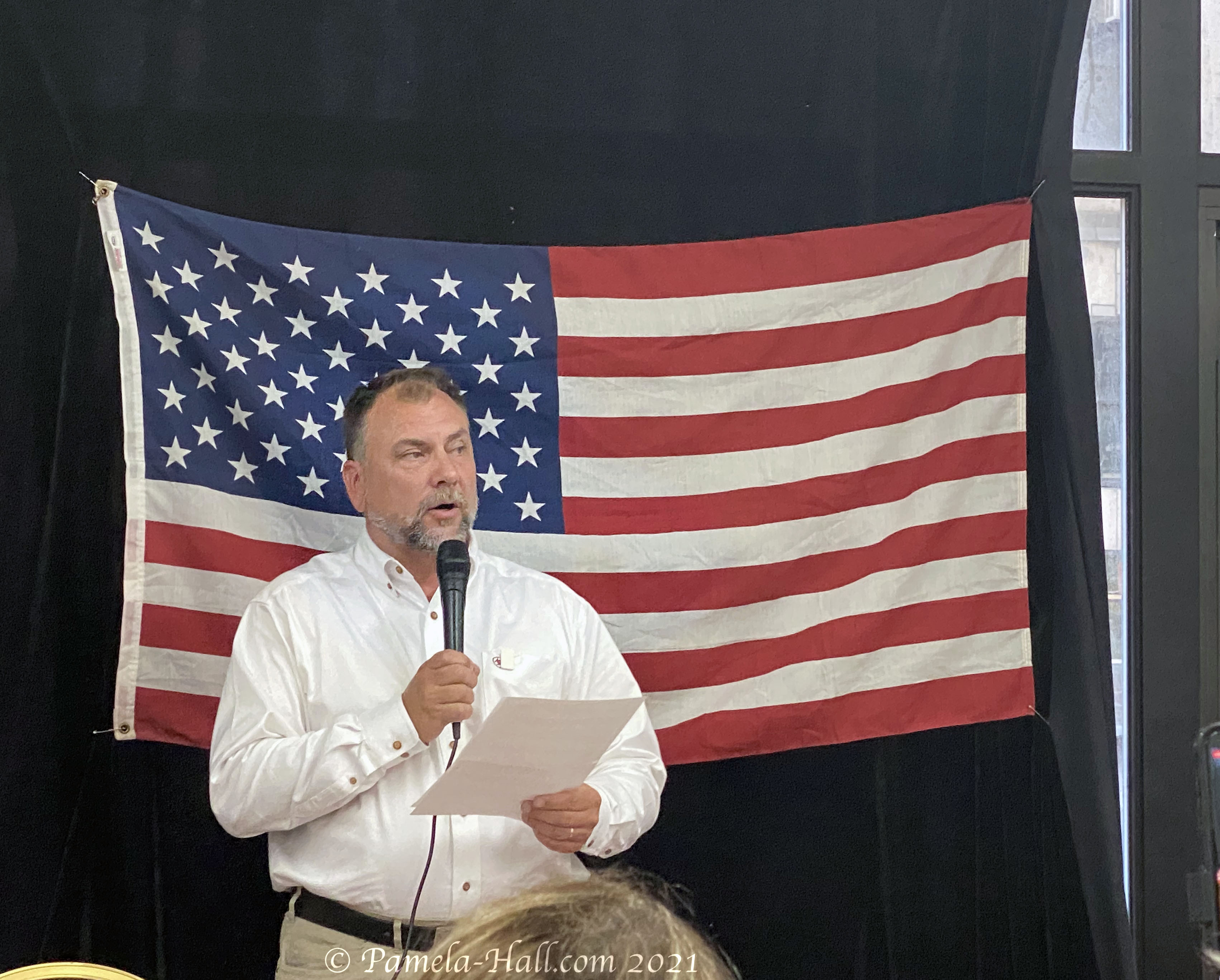 Part 1 . (transcribed some of his statements)  "The government works for us. They have forgotten. He is going to sue them. They are afraid. Doing something right. Not allowed to sing in church . because of virus. Ikea. Only 480 people allowed. My whole church and 1/2 my neighborhood.Nothing to do with virus. It is tyranny. control"

Part 2 . "Evil will never stop doing evil. The goevrnment has soldiers, they can shoot us, but I will never stop saying NO. Muzzles. No identity. No voice. Destroying our next generation. Why I came to Canada - FREEDOM. Even if retired, must do this for our children and our grand children"

Part 3 . "There is no more Rule of Law. Do what ever they want. Fascism. you are the first victims. Stop them now. here in America. NO and Get Out. Bidens. Clintons. Faucis. Evil people. They brutally arrested me. 7 criminal charges. face a year. (Re Tickets) Give me the billions, so I can be the first ... They arrested a pastor in front of his 7 children. Why can't you be like us, say others ... cowardly priests and ministers afraid to get a ticket. I don't want to be like you, afraid because you MIGHT get a ticket."

Part 4- "Starting in March 2020 he was ordered to stop feeding the poor. He did not.  So, while the pastor was feeding the poor,  a SWAT team (100 officers, 52 police cars, 20 police on bicycles) showed up. Intimidating, harassing, continuing into December giving him tickets. For over a year they would video tape us; take pictures. We're not hiding we are coming after you, even the parishioners. And then they CANCELLED Christmas. (see an arrest here)

How dare you. I'm cancelling you. We had a huge Christmas celebration and I wound up with 11 tickets that day. Charges I didn't know existed. The arresting officers were Brits (not Canadians) bringing that garbage with them. I didn't want to bring Communism with me, I escaped Communism. And the HEALTH inspector was from CHINA. I said GET OUT. WE are not racists. Our church is all colours."

Unfortunately, I had to leave as he finished speaking. If there was a Q and A, I missed it. Still, I left with much to think about as I pondered : Faith and Courage.

"We Gain Courage From Faith to restore our nation; where the practice of faith and worship is unrestricted, education is transparent and empowers children, commerce is thriving and unimpeded, and the government serves the interest of the People." Save Our Nation.

(Where indicated, Videos and Pictures property of Pamela Hall-VSB)

Posted by Red Squirrel (Pamela Hall) at 2:17 PM No comments: 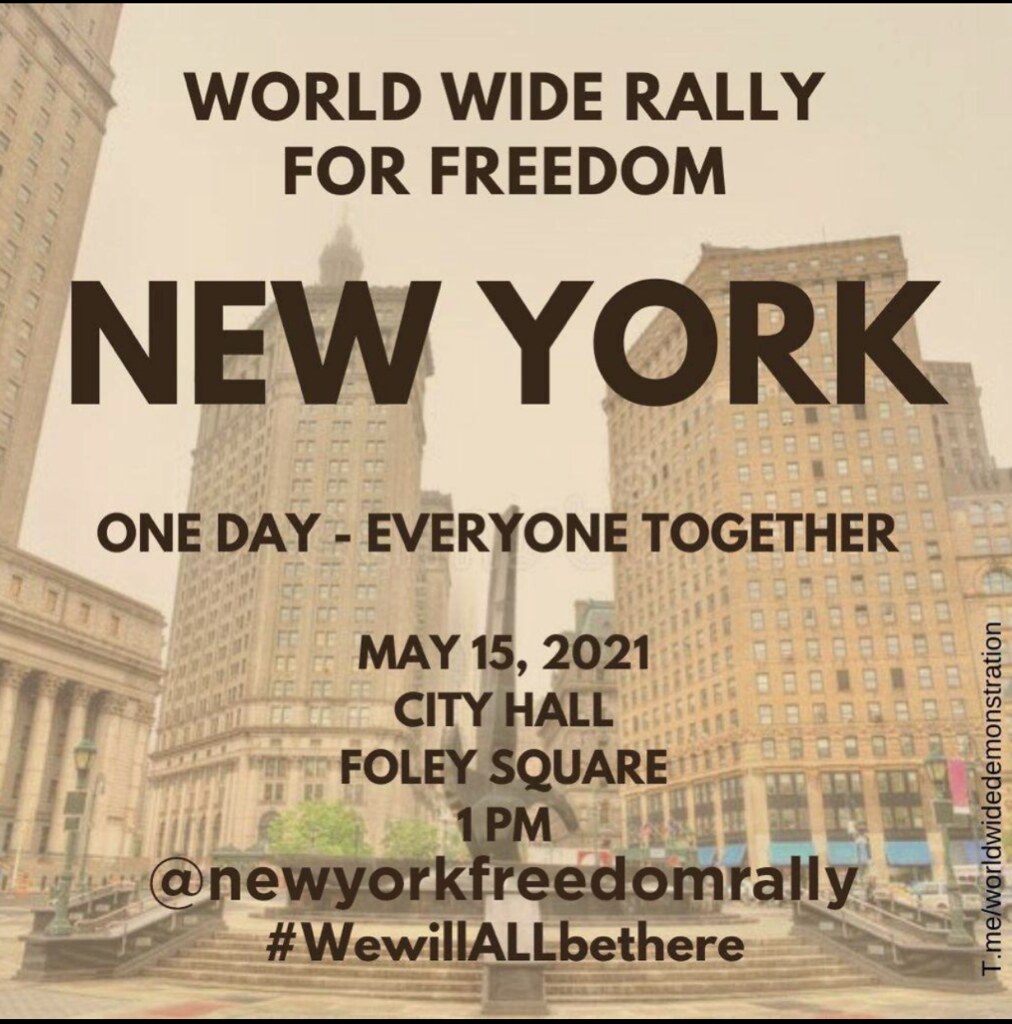 On May 15, 2021, there were demonstrations in multiple cities across the U.S. to denounce restrictions imposed during the COVID-19 pandemic and their impact on civil liberties. 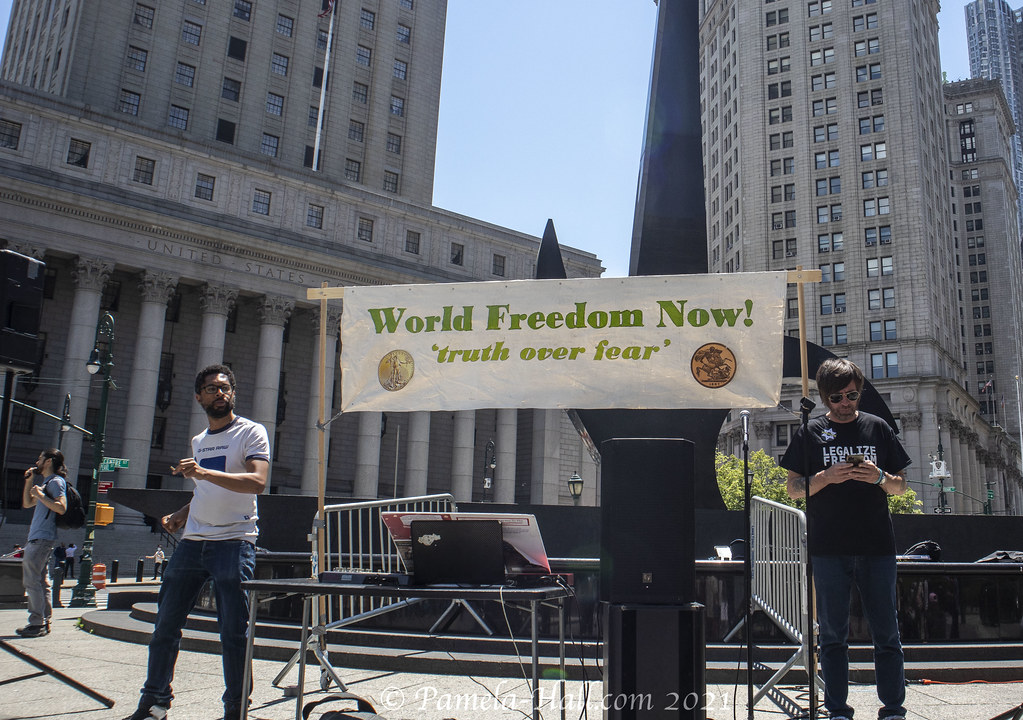 A Worldwide Rally For FREEDOM demanding an end to restrictions and lies, never to return. Truth over Fear. 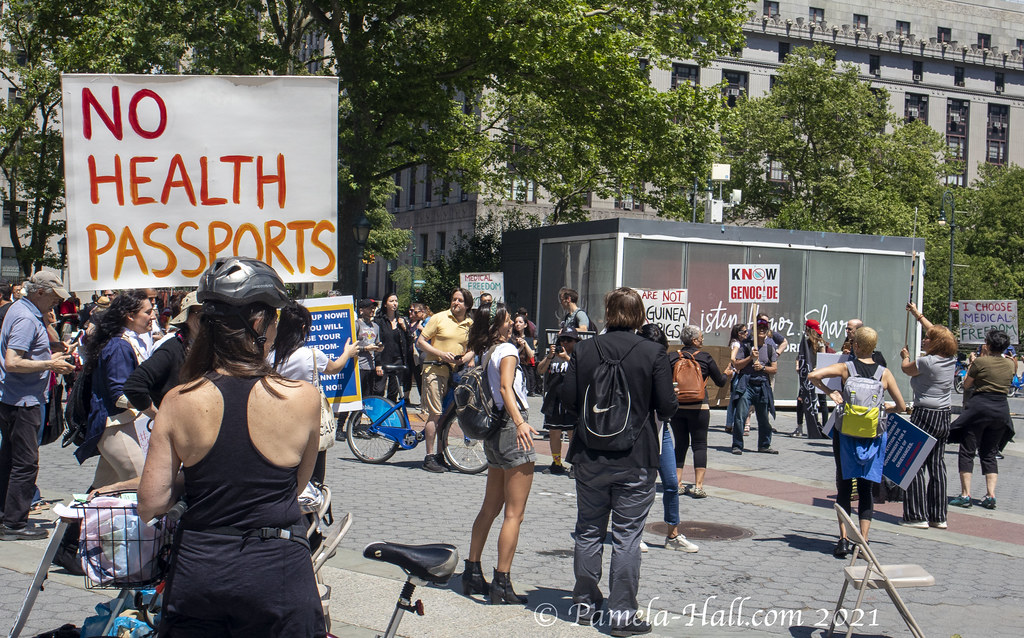 This crowd of freedom-lovers met across from the NYC's famed court house. They were friendly, yet determined to fight back against the lies. 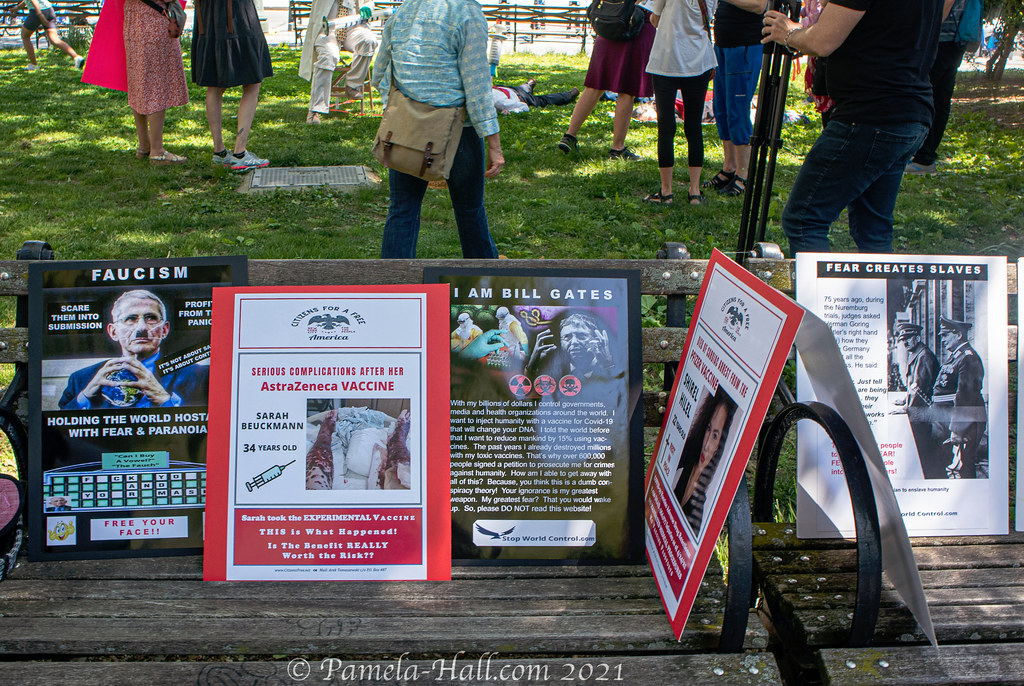 Fear is not the answer. Truth is the new normal. 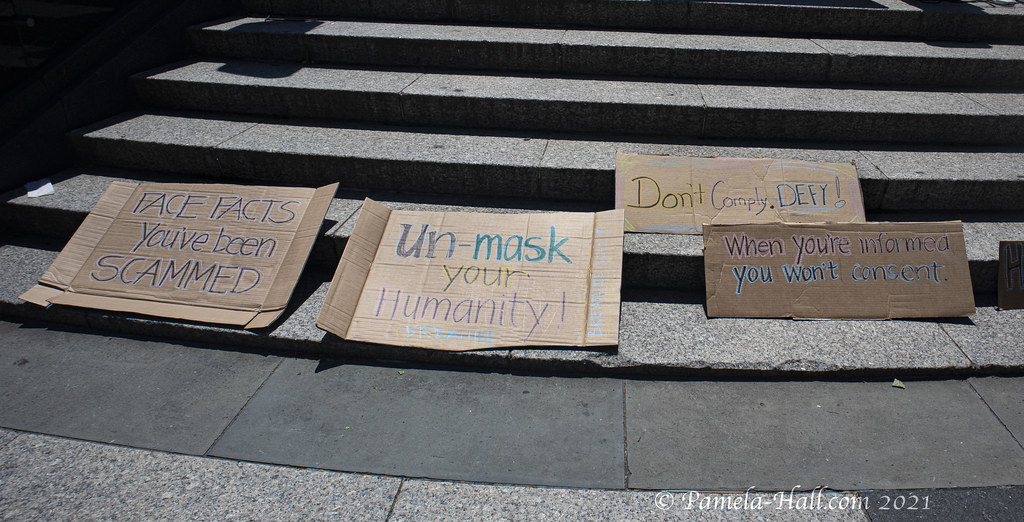 People are angry everywhere, denouncing the restrictions imposed during the Chinese virus pandemic and the impact it has had on civil liberties world-wide. [Guarda]

. Foley Square was alive with peaceful opposition to the disinformation that fed the fears of a trapped, locked-down public and clearly did not support forced vaccination. 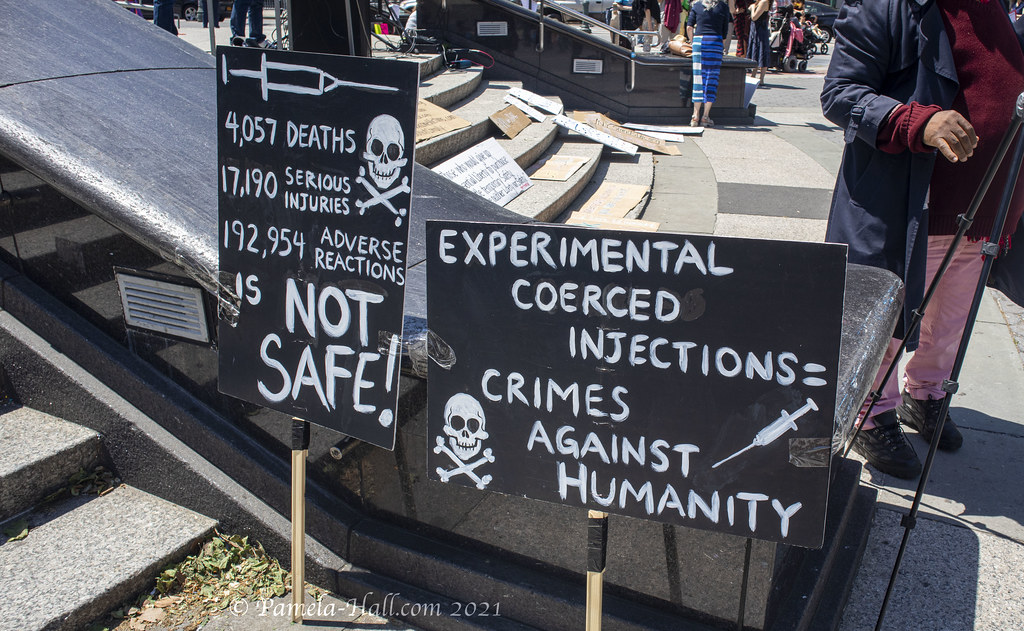 With Dr. Fauci's emails recently released, the man behind the curtain has been exposed as the LIAR he has been all along.

"... a Freedom of Information Act request led to a trove of emails from Dr. Anthony Fauci being released to public view. And that view, stretching back to early 2020, is a doozy. "[NY Post] 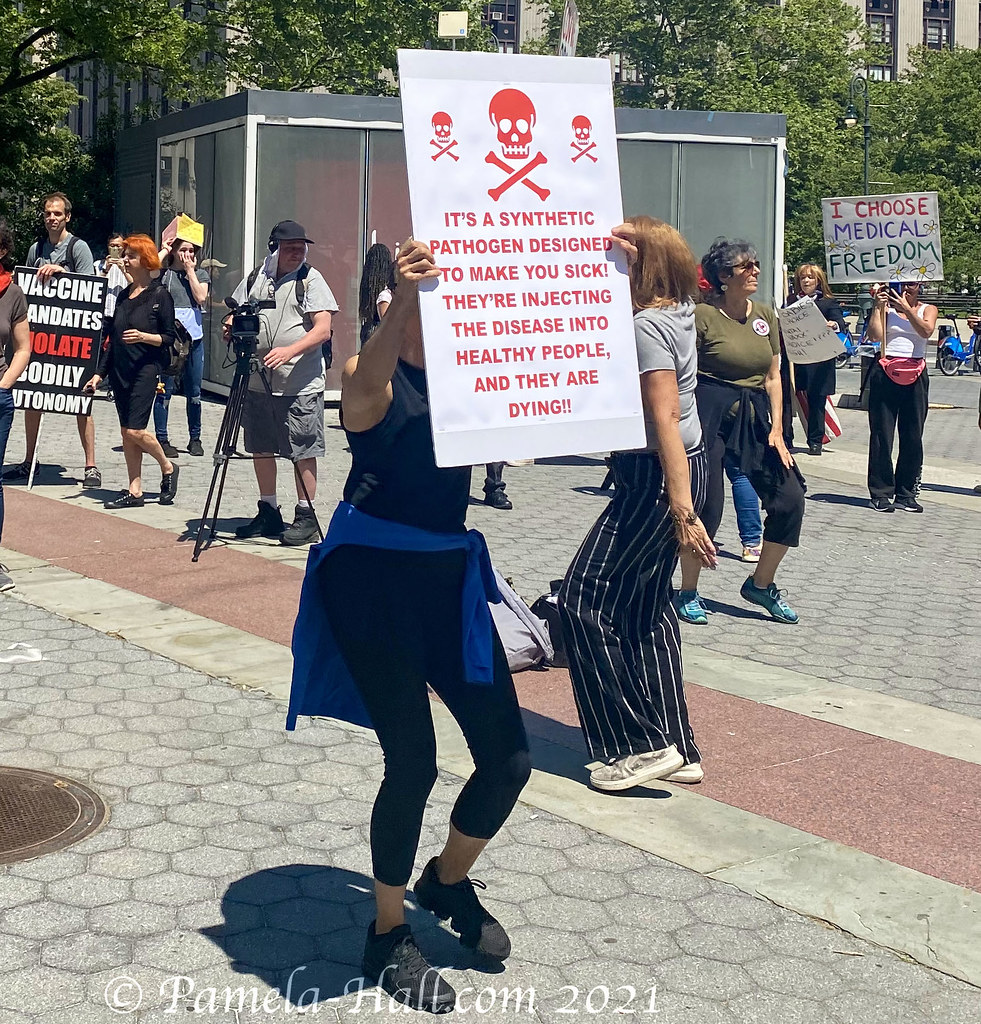 Fauci says he was ‘not convinced’ that COVID developed naturally. He just kept it a secret. [NY Post]

What we suspected from the beginning was confirmed when Anthony Fauci’s emails were released.

He knew that masks mostly didn’t work to stop the spread of the China Virus.

He knew that it likely came from a lab.

He lied about all these things ... [Dr Paul Gosar] 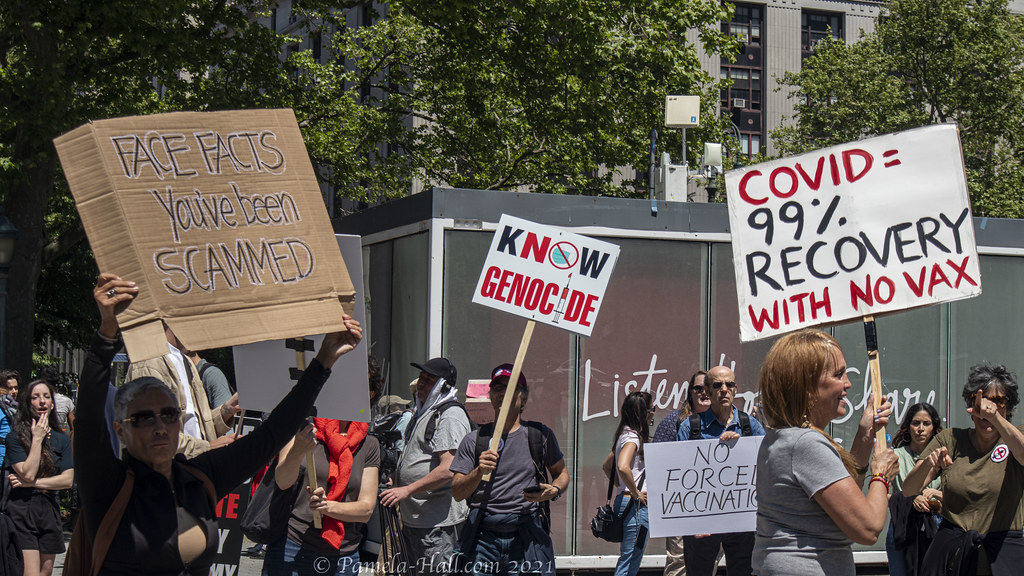 Perhaps this will bring an end to the MSM cover-up. 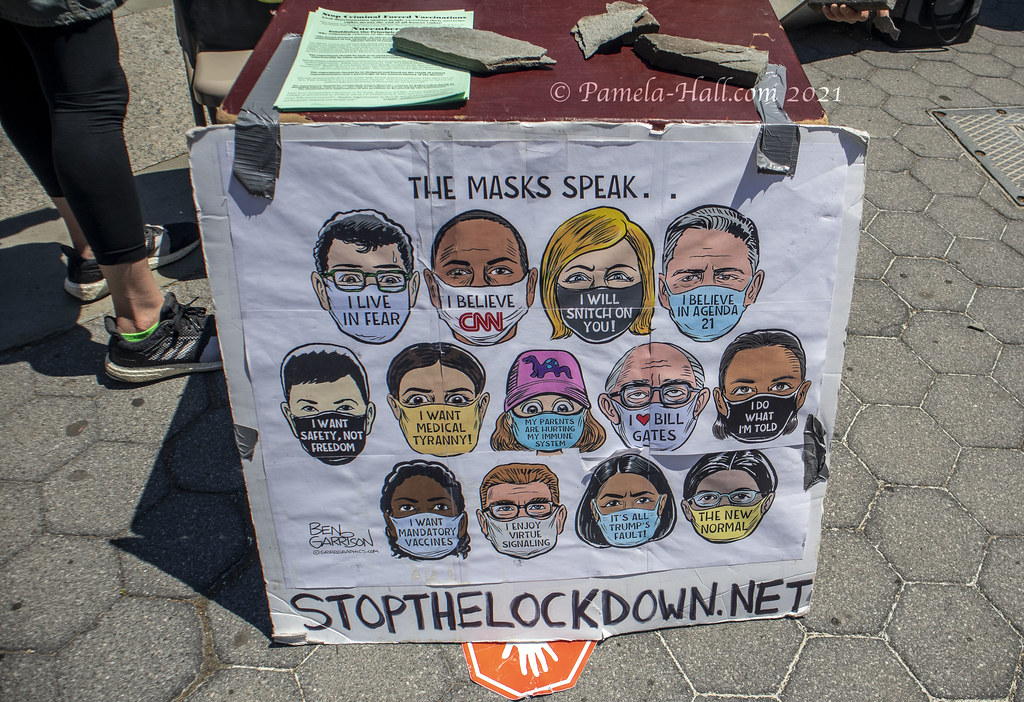 Fauci ruined lives - and the economy - world-wide. He was given too much power because the Demo-left, desperate to destroy President Trump, cared not if people DIED. 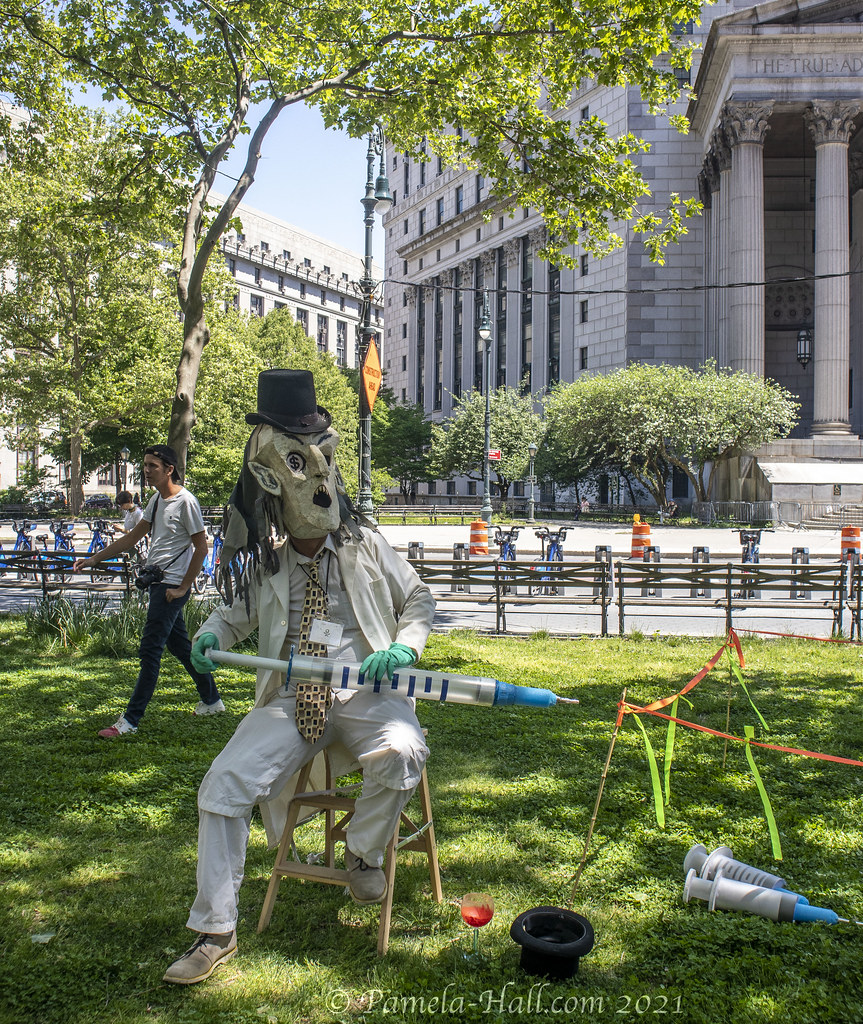 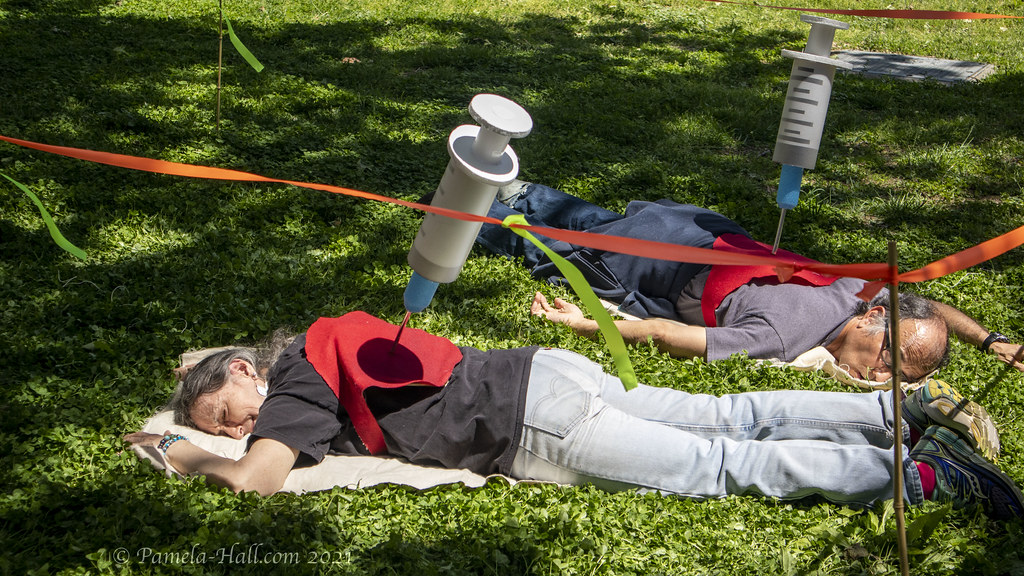 "Keep an open mind and go after the truth", said Fauci.  An obscene cover as he defended China. 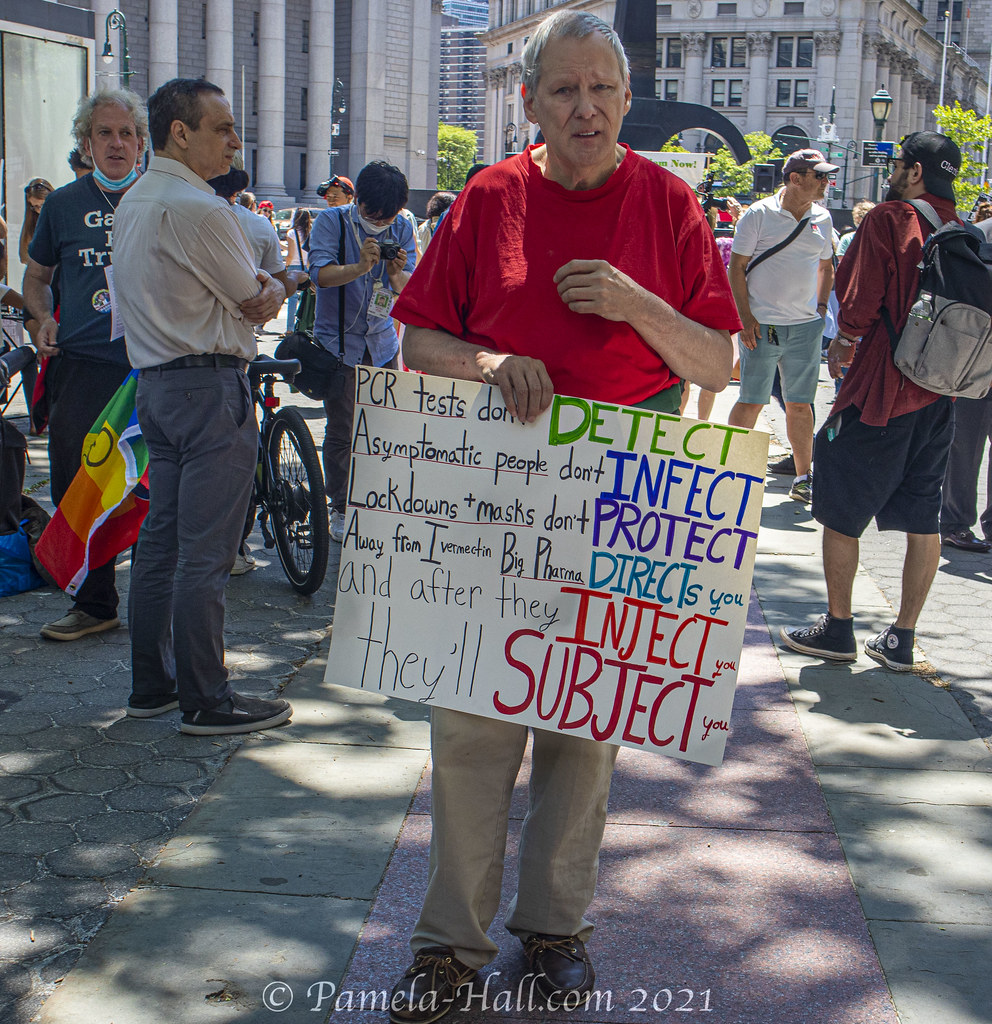 This strange little man and his never-ending flip-flops made him a media HERO. [NY Post] 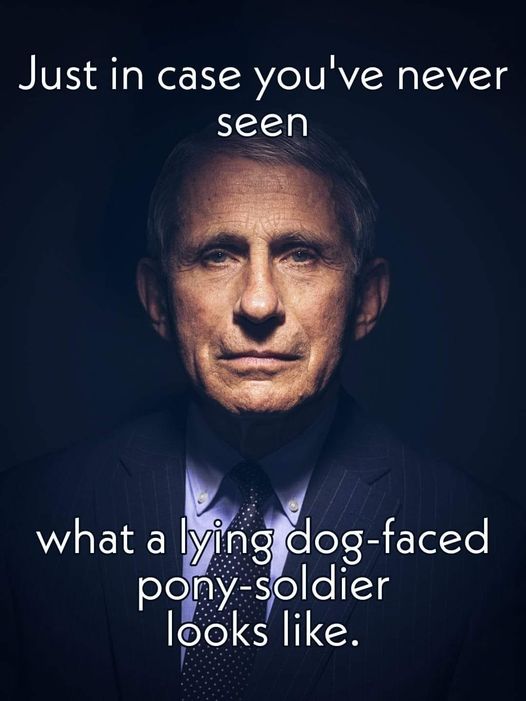 "Dr. Fauci  ...  should be fired today and not allowed anywhere near our nation’s health policy ever again. The American people also need to wake up to what this huckster and charlatan pulled over on them and vow to never, ever let it happen again." [NY Post]

Fauci should pay for his crimes against humanity.

Posted by Red Squirrel (Pamela Hall) at 5:50 PM No comments: