From the Jewish Forward:

College Chapters Hope To Unite and Strengthen Protest of Israel

Since the founding of the first SJP at the University of California, Berkeley in 2001, the number of SJP groups has grown to over 75, according to the ADL.

Not all conference attendees will be members of groups that call themselves Students for Justice in Palestine. The Brandeis chapter of Jewish Voice for Peace, an activist organization harshly critical of Israel, is sending a Brandeis junior named Morgan Conley as a representative.

“JVP definitely shares the same beliefs and goals that SJP has, so I think representing Brandeis JVP at the conference is an act of solidarity with SJP’s cause,” Conley said. “I think it’s definitely a really good way to start networking between the two groups.

Salahi said that Palestinians and Jews make up the largest national and religious groups on the conference’s steering committee. "


The Anti-Israel Conference, unopposed, was held ON campus at Columbia University. 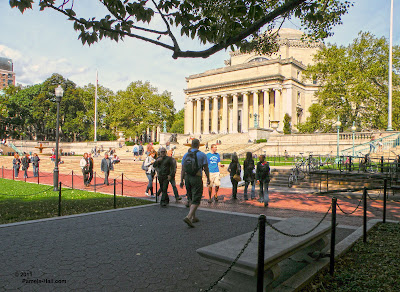 Of course, the conference isn't the first time these students were fed such a heavy dose of racism. 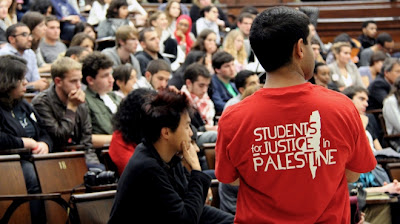 But, we were pleased to see a counter-protest outside the campus gate.

This was on the third and final day of the Students for Justice in Palestine “teach-in".


"Some protesters came independently, alerted by e-mails or social media.  Others were members of groups such as Americans for a Safe Israel, Human Rights Coalition Against Radical Islam,  Amcha-Coalition for Jewish Concerns, National Council on Jewish Affairs, and Liberals for Israel. " **

A peaceful counter protest meant to expose the lies that will be taught during Israel Apartheid Week 2012.

The unfettered hatred for Jews and Israel that is encouraged on our college campuses throughout North America by the conference.

Like the street theatre antics below, it must all be challenged.


In support of the SJP Conference, I found this blog post that tried to debunk the assertions of anti-Zionism at the 'teach-in. The writer presents a smug critique of an article written by JanSuzanne Krasner,

"... neither Krasner or NCJA provide any evidence as to how this conference intimidates pro-Israel Jewish students. The conference is not anti-Israel and, thus, it is not an anti-pro-Israel-Jewish-student conference..."

Fortunately, the video I made outside the conference (scroll down) quickly exposed his lies.  Many of the students speaking to us were clearly anti-Zionists. BTW- the kids in the red t-shirts were the planners of the conference not just participants...

"Attendees and organizers, in red shirts, listen attentively during the SJP Conference’s opening"

I was impressed by how graciously our side reached out and genuinely listened to these kids, even though it must have been difficult to let them drone on spewing school-sanctioned propaganda, but they did. They listened.

This anti-Israel, anti-Jewish agitprop is all meant to provoke and we did have a few moments on our side when emotions flared, but that was it. Always a brief moment and then we would recover.

On camera I caught one particular student who was determined to correct our LIES. ( the girl in burgundy)  She was listened to with the most courteous of objections. She calmly left and even returned to continue her assault on the truth and still she was treated with respect. However, at the end, she is one of those leading the hateful genocidal chants "From The River to the Sea" and "Israel is a terrorist State". "Fair and Balanced" was not on the SJP Conference Agenda....

Observing the counter-protest was CAIR-NY Civil Rights Manager, Cyrus McGoldrick. He happens to be  a convert to Islam; grew up Roman Catholic. After taking a few pictures, he just stood and watched. I spoke to him briefly. He puts on quite a friendly face and he's a Hip Hop / Poet, not just the CAIR- NY mucky-muck.  During our chat he reminded me that he, too, is an American and mentioned he was very uncomfortable with what some of our signs said.

What is it with these Muslim kids and HIP HOP? It's so aggressive but perhaps that's all we need to know. It appeals to these disaffected youths because it is angry 'music' for angry kids. 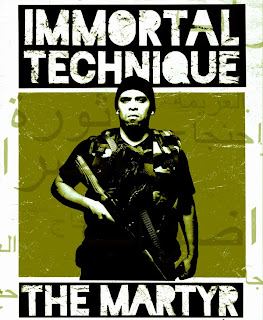 I've come nose to nose, literally, with one particularly violent 'fakestinian' female, Nancy. She's so obsessed with Hip Hop that she even manages Hip Hop 'artists' like  IMMORTAL TECHNIQUE (when she isn't on the streets spewing her venom against those....ZIONISTS!)

Nancy "The Brit". She's a monster of aggression towards the opposition when we photograph their rallies. Always wheres a kuffiya on her lovely face. Points and yells,  "ZIONIST" while she assaults and blocks cameras on a public street. (Kind of silly really, but it's her favorite past-time)

And the police just watch. Sometimes not even capable of hiding their scowls towards our Pro-Israel side . After all, they've just heard the buzz word "zionist" and "fascist". Guess all that CAIR Sensitivity Training is finally paying off (sarc intended) 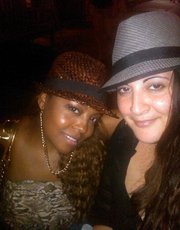 This is Nancy. Nancy Mansour. She's British. Uses the handle Harrabic Tubman and runs an vile anti-Israel organization  " Existence is Resistance" and she Hates Jews. 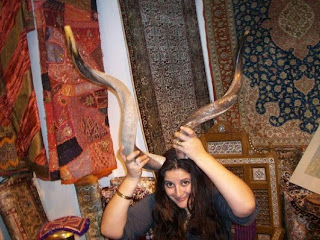 These are some of the disrespectful, anti-Jewish antics of Nancy, nurtured and bred in such training sessions on our college campuses. 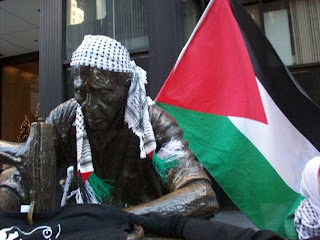 Nancy's anti-Semitic vandalism at left. A display she created in the mid-town Garment District.

Lots of Street Theatre when Fakestinians are around so #OWS was on the agenda. The SJP kids went down to the Occupation on Sunday the 16th, after the conference, to show their  support for the "occupation". Probably arranged by Cyrus since he and CAIR  are encouraging a Muslim presence at Zuccotti which continues at #OWS. (mostly on Fridays and Saturday) 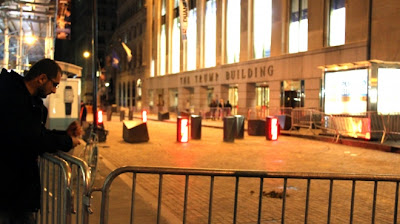 "One SJP Conference organizer waits for the rest of the SJP contingency on its way to the Occupy Wall Street protests in New York City."

Found this video of Cyrus at the OCW Jummah Prayers Show (on the 21st) Cyrus starts the video and speaks til about 2:25 (he returns at 9:54) It is a very  'pretty ' video of "Jummah Day".  Produced with pretty, pretty music. Lulling us into a peaceful state as we listen to the gentle, peaceful words. Just listen... listen...listen to the music.....

These kids are never going to stray from the 'party-line'

More pictures in the Slide Show of our counter- protest:

I took these pictures right after the arrest, I didn’t actually see what happened but, Fern Sidman apparently did. Here is a quote from her article that’s linked at the bottom of this post:

“Julian Rappaport, one of the demonstrators engaging with passers-by at the university’s gate, contended that the anti-Israel conference inside was not an expression of free speech, but “to give only one, incorrect side of the picture.Columbia has the responsibility to be more critical of what’s going on.”

During a heated confrontation with an SJP member, who called for “the complete obliteration of the racist Zionist entity,” Mr. Rappaport was arrested by police for allegedly kicking the student and was charged with disorderly conduct. He was released soon thereafter and returned to the demonstration.”

The young man who made that offensive statement, calling for the ”obliteration of the Zionist entity”, is in the picture right after the handcuffs. He’s in shorts and is talking to the officer.

Next, the  article from Fern Sidman reporting on our Counter Protest  here

Am Yisrael Chai!
Posted by Red Squirrel (Pamela Hall) at 2:17 AM 2 comments:

The occupation of Zuccotti Park continued on Friday, 10-21-11. Day 34 . It was early afternoon, just after lunch and the DRUMS were going strong. The park was still a huge mess and now had even bigger WHITE tape marking everyone's SPACE.  This is an 8 minute video as I walked through the park looking for the Jummah Prayers.


At first I couldn't find them. At 6:21 in video there's a "Jesus heart You" sign. It's apparent (now) that the prayers were IN the park and that sign was for the Muslims. But, since I didn't see them I went to where they were supposed to be which was in front of the Helmsley Building (at the Red cube) . the cube, however, was blocked with metal barricades.

Seems the Jummah prayers were in the park below this red tower. Note the GROUND ZERO SKYLINE in the back ground over looking the park.

BTW- South of the park is the historical Trinity Episcopal Church where Alexander Hamilton is buried. This is the church that supports the building of a mosque at Ground Zero but did not give any support to St. Nicholas Greek Orthodox Church destroyed on 9-11. Trinity is now offering a place for the insurgents to SHOWER.

Once I found the Jummah Prayers for Dhimmis, it had already started and the CAIR operatives had roped-off the area with twine where the plastic tarps were laid down.

This made the Jummah area, in this "public park", restricted.  Did not like this as I was unable to get passed the twine to join the other cameras.  Stuck to the left of the Imam,not in front, made the audio  hard to capture but it's good enough to get the drift: Taqiyya Central fronting for the Stealth Jihad at Ground Zero.

I got about 25 minutes of prayers and taqiyya from the long-winded Imam Ayub Abdul Baki of the Islamic Cultural Center of NY . I edited his sermon and prayers down to approx 13 minutes. His rewriting of American history is bizarre. This is the  Imam's brochure they handed out.

His other message was how generous and forgiving Islam is. He's holding the last sermon of Mohammed in a picture frame to emphasize his other main talking point about Mohammed.

That sermon is supposed to remind us how wonderful OUR prophet was....

Idiots like  this non-Muslim woman who sports another American flag desecrated with her lefty symbols and a crescent moon:

CAIR Rep, Cyrus McGoldrick, a Muslim convert who is also a Hip Hop poet/singer, stood on the steps watching not praying.

But, Cyrus made sure he posed praying for the cameras afterwards.

Warnings from their brochure table.

Once this was done, I finished reviewing the park. It is a PIG PEN. Far worse than it was a week ago. This is Zuccotti-ville and it's filth which the press seems to ignore, continues to grow .

Last saw Squatters-town the day before the sanitation sweep that didn't happen. The insurgents were scrubbing like little elves and and strapping their stuff down like a hurricane was coming through. But, they won. Brookfield Properties was bullied by the Marxist-Unions and politicians. They blinked. And seven days later, the place is even MORE disgusting.  This union has covered up the Park sign that says it's illegal to put up tents

So ...we have tents popping up now

Someone has a sense of humor:

Drummers and lots of begging for money, even from the drummers

Sacred Altars and Racist messages from the Revolutionary Communist Party

Tell us how you really feel...

Families sharing the revolution ( this was bring your kids for a sleep-over night, I kid you not)

And even after the locals went to the Community Board # 1 saying they couldn't take the filth and noise anymore,  'FREEDOM OF SPEECH" trumped Health and Sanitation.

The anarchists are holding the city and the residents of Wall Street hostage. It's criminal.

Slide show  has more of the Jummah and Zuccotti-ville