September 28: The first of two parade videos (Parts 6 and 7) is up now (please scroll down for Part 6)


Part 1: The parade came to an end at Madison Square Park at 23rd and Madison Ave. The early part of ceremony had an award to Mayor Bloomberg as well as The Priest, the Rabbi and the Imam. (who seemed to be a non-note band of sorts)


Part 2: Three speakers from ICNA, MAS and the Islamic Cultural Center of NY


Part 3: This speaker is Nihad Awad of CAIR (Council of Islamic Relations) was one of the Grand marshals of the parade.

While many spoke on the stage of how the American Muslim is "suffering " at the hands of bigots they used three groups of lovely children to sing of the "joys" and " peace" that Islam brings. Good ol' Da'wah.

Part 5 The prayers before the parade were at 38th and Madison this year (even though it was published at 41st as it had been in previous years). There was a delay putting out the tarps (prayer "rugs") due to this location. Seemed police weren't ready to close the intersection in time for the zuhur prayer. The Imam kept singing. There is a wudu basin on Madison this year. The tarps were laid out and finally the prayers (at approx. 10 minutes into video )

Part 6: The parade began with flags..lots of flags followed the the police band playing "This is My Country"...followed by the Muslim Police Officers Association.
Then lots of local masjids, mosques, floats celebrating the Victory Mosque that destroyed the great Jewish Temple....women's groups, schools, hijabs, niqabs,families.... da'wah was loud and bold for the Ummah of North America with lots of loving, peaceful quotes from Mohamed and chants of takbir. takbir. takbir.

Part 7: I walked with the parade to Madison Square Park at 25th Street. The takbir. takbir. takbir. mixed in with other chants was relentless and then...the occasional...silence .The parade was quite simple. It was families, children, schools and masjids and, of course, the da'wah signs. At the park, there was a popular da'wah table(FREE)andthen more prayers were sung from the stage. After a young woman with a lovely voice sang the National Anthem, the program continued with the speakers ( See videos 1,2 and 3)

On September 26, our first observations :

Slide show is of prayers and the TARPS on Madison Avenue. The parade floats, some signs and banners....and the children....

The speakers did a lot of complaining about Park 51 with the usual bigots, hatred slander and it was no surprise that it was also a LOVE-Fest for Bloomberg and Obama.

The unannounced theme: Da'wah. To Educate and rewrite Islam's "history".

Posted by Red Squirrel (Pamela Hall) at 9:45 PM No comments:

In Part 1 (John Bolton)
The first 3 minutes has unsteady camera trying to shoot over crowd.
I decided to black out the video in those sections so I could post video .
Please LISTEN at those spots. Sound is good . Speech is great.

In Part 2 (John Bolton) Holding camera over heads in crowd of this fabulous (but long) speech, I didn't catch the very end. Only missed the wrap up at the end.

11 AM, September 23,2010. Rally to protest the presence of Ahmadinejad at the UN. Brave Iranians came together, joined by Jews and Christians as well as former Ambassador the to the U.N. John Bolton and former NYC Mayor Rudy Giuliani, both of whom spoke. 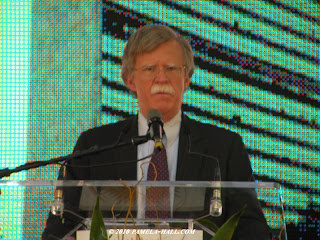 America came out to protest the murderous Ahmadinejad; this tyrant who was welcomed at the United Nations. Unwanted in Iran, he steals elections and terrorizes and murders those who protest and beg for freedom. 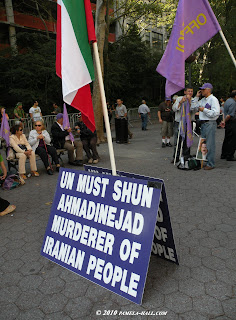 We have video and lots of pictures from the "No to Ah'jad" rally across the the U.N. It was one of the more beautiful rallies. The purple balloons, scarves and caps; the confetti stars being shot high above the crowd...it was gorgeous. Yet,
the message was any thing but..... Sometimes uplifting and at other times deeply disturbing; that the UN should give a public forum to the holocaust denying, 9-11 truther: sickening! 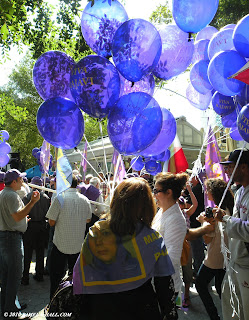 Part 3: The Marxist-Iranians were set-up at the corner of 47th and 2nd ave. The police however tried to move them, said they had no amplified sound permit, but as usual....after much chatter between police and the Leftists.... the Lefty/Soc/Progressive/Commies-Reads: Marxist....They didn't move.

A whole contingent of sign-waving Che-loving Reds arrived, pressing-on with their SECULAR protest. Then in the distance we heard a huge roar and saw lots of confetti. This was when Maryam Rajavi, leader of the Iranian Resistance was introduced to speak.

Apologies for BOUNCY CAMERA work... the zoom was hyper sensitive ...and I was having more difficulty than usual keeping it steady....

Part 6: During the protest, South of the stage (at 1st Avenue) where the rally took place was the Falun Gong. Never saw them in action before (and so QUIET). Then as I left the rally, there was Crazy Commie Guy on 2nd Avenue. What a contrast....

There was unexpected street-theatre depicting the sharia law horrors of hangings and stonings so loved by this vile dwarf. 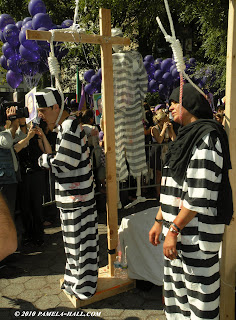 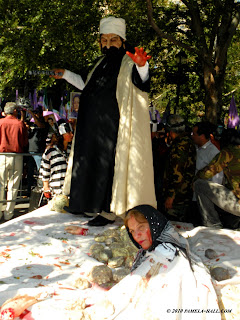 There were the Marxist Iranians accompanied by the local Reds and of course (for those of you who know him: Crazy Commie Guy.) 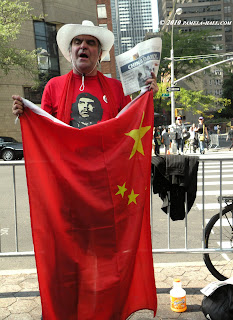 It is an outrage that the madman of Tehran, Mahmud Ahmadinejad was granted a platform at the United Nations. “...a sad day for people of all faiths” . 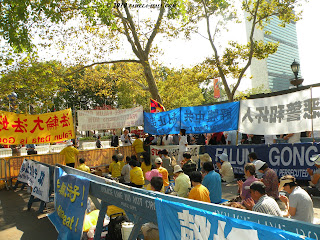 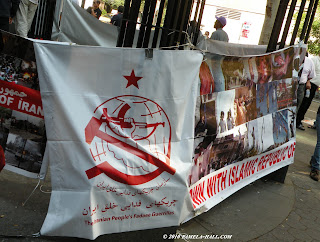 These Leftists formed a new group called "Iran 180" and hosted a press conference on Monday with Anthony Weiner and Jerry Nadler . Today they brought their GIANT head-puppets (nobody but the hard-core left drags these giant heads around) It's De rigueur . Freshman year: "How to make Giant Puppet Heads for Protests 101" 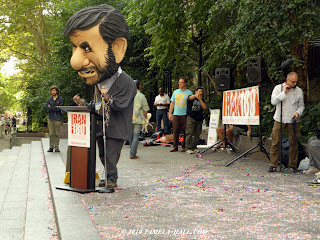 TONS of pictures of this eclectic rally to follow. One more slide-show to be posted) 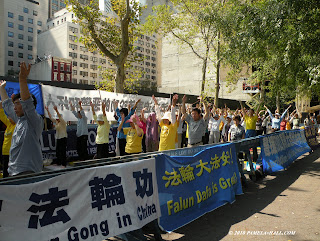 (video) Protest Cries of Iranians in NY: "Ahmadinejad Out of U.N."


Iranian Freedom Fighters on September 21, 2010. We found this protest at 42nd Street and 2nd Avenue.

It's an out rage that this unelected tyrant has been welcomed by the United Nations. Just ask these Iranians

It is time to UNITE and FREE IRAN

It is time for IRANIANS to be True IRANIAN

September 23, 2010, the outrage continues when the murderous Ahmadinejadspeaks at the United Nations.

Another post from Columbus Circle Protest on September 19, is posted here
...
Posted by Red Squirrel (Pamela Hall) at 6:00 PM No comments:

"This is a Day of Outrage"

On TUESDAY, SEPTEMBER 21, 2010 @ 9:45 AM, at the SOUTHWEST CORNER OF 40TH & 1ST AVENUE, the New York Board of Rabbis (NYBR) gathered at 1st Avenue and 40th street to protest the President of Iran . A sad day for New Yorkers and Americans.

"There is no place for this evil-entity to be at the U.N. A sad day for New Yorkers and Americans."

"Ah'jad, a man who brutalizes the opposition. A tyrant . A murderer who is being given an honorable welcome by the U.N. , when he should be locked away.; put on-trial and locked away for the crime of genocide."

They gathered at the UN to protest and to voice their condemnation of the madman of Tehran, Mahmud Ahmadinejad being granted a platform at the United Nations. "This is a sad day for people of all faiths."

The night before Ah'jad refused to even say the name of Israel, using instead "the Zionist entity". "This protest is about doing what is right. It is about the Decent vs the un-Decent."

The Rabbis were joined by the Inter-Faith Community. "No sign of CAIR, ISNA, ICNA or other Islamic surpremacists. Where was peacemaker Rauf?"

After a few short speeches, they formed a Human Link Across First Avenue in Protest; singing and the blowing the shofar.


The New York Board of Rabbis (NYBR), is the largest interdenominational
rabbinic body in the world representing over 700 Rabbis from the New York
metropolitan area .

After linking arms and forming a chain to block 1st Avenue in
protest the police then asked them to leave the street or they would be arrested. With the blowing of the shofar, they willingly and respectfully cleared 1st Avenue.

"The voices of the murdered cry-out and the voice of moral conscience will follow this evil (Ah'jad) until he is defeated and overcome. Goodness will prevail."

"This is a Day of Outrage"
Posted by Red Squirrel (Pamela Hall) at 6:40 PM No comments:

pictures from the 9-11 Rally of Remembrance at Ground Zero

Please click on pictures to see the original size at flickr. To see more detail in the crowd shots by choosing original size.

And videos of all the speakers are posted here:

After the rally was over, they was some meeting and greeting with the crowd (even though security had to remain on-alert)

So...who do you think the police were protecting from violence....US or THEM

And here's their "non political" flyer. Our rally was a respectful Rally of Remembrance .... NOT POLITICIZING. Read how THEY rallied, their hard-core anti-American leftists on 9-11 and the dhimmi-press ....said THEY were non-political:

And the ubiquitous and very political 9-11(We are Change) Truthers (all day and into the evening):

With premeditation they chose to ignore the HUGE peaceful and respectful gathering of AMERICANS without out right lies and distortions.

WHERE is all of the video they took the verifies how peaceful, respectful and HUGE this rally was. This was at 1:30...and the crowd was into the second block already. People were packed shoulder to shoulder...all the way to Chambers by
3 :00 Pm and the police turned away hundreds if not thousands....

Stand Tall. Stand Proud. And Say NO to a Mosque at Ground Zero. Not Now. Not Ever!!

Posted by Red Squirrel (Pamela Hall) at 1:56 PM No comments: