The hard-core Leftists were demanding that the American Government, and the American people, apologize for dropping the A-bombs on Hiroshima & Nagasaki in August of 1945. 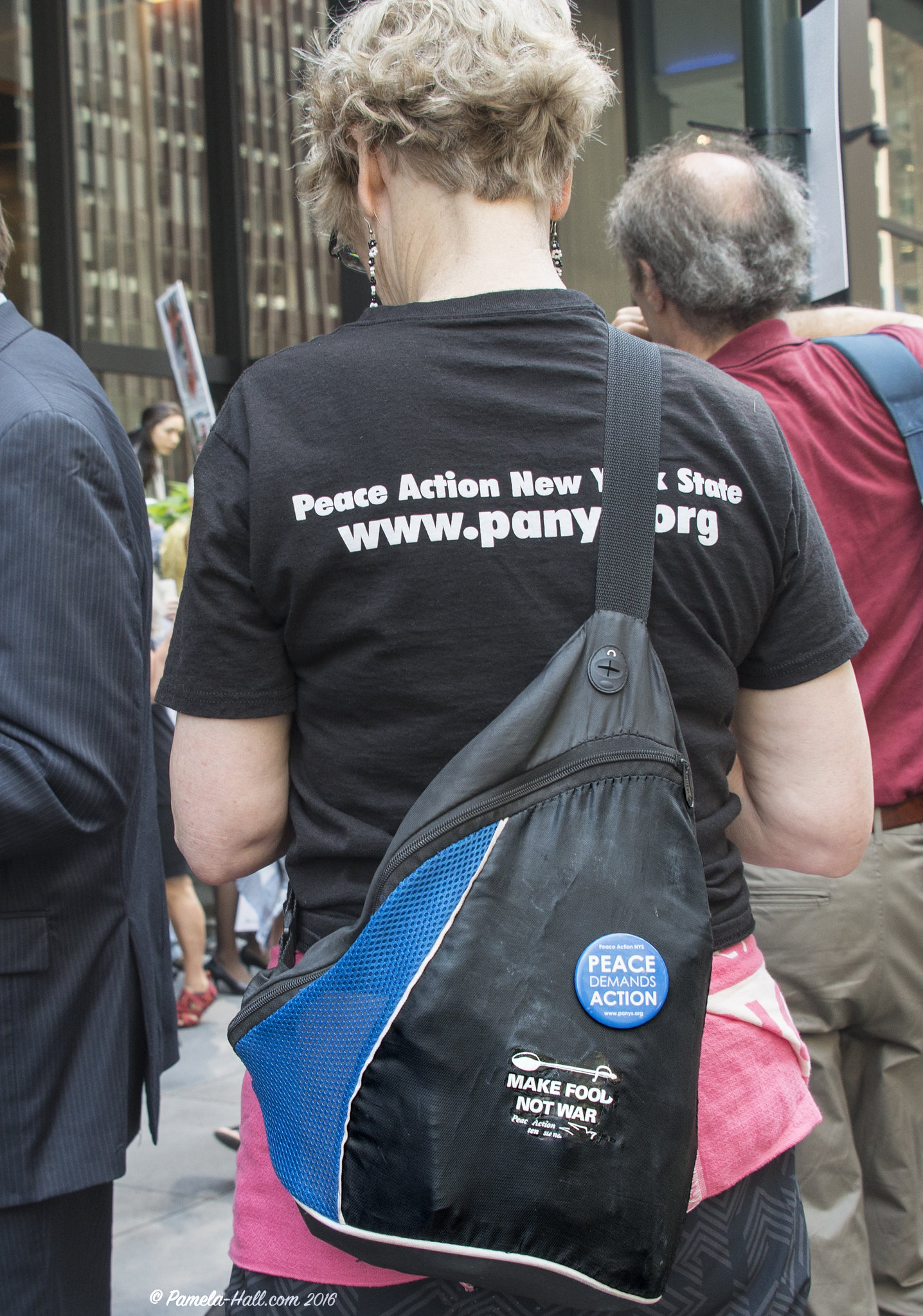 Apologize for Taking Action, a PEACE Action, to end four years of a brutal war in the Pacific; a war that had no end in sight.

A WAR that started, for the U.S., when the Imperial Japanese forces attacked the United States at Pearl Harbor (without warning) on Dec 7, 1941:
“A Day that will live in Infamy“.

By 1945, it took the bombing of Hiroshima & Nagasaki to put an end to not four, but actually eight years of the Japanese War in the Pacific. After the bombs were dropped, VJ Day came quickly.  WW II was finally OVER!

Yet, according to these “pacifists”, dropping the A-bombs on Japan was an
unnecessary, evil act; “a catastrophic wrong”. NUKES were NOT the ANSWER.

[Follow link for Google Doc of  "Why Truman Dropped the Bomb"] 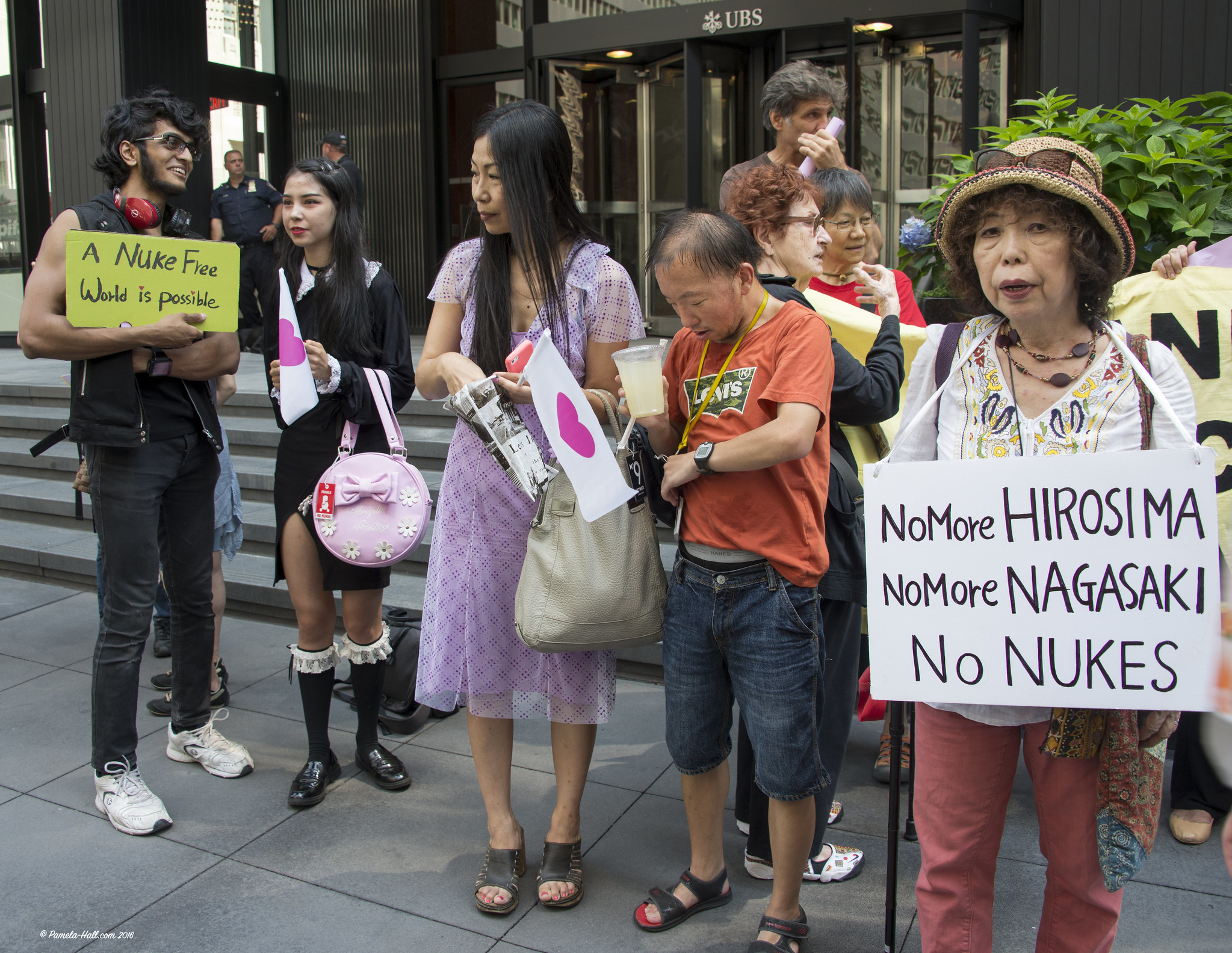 Fact: the Imperial Japanese war-machine was the aggressor in that horrid war. But, the hard-core AMERICAN Leftist/Progs were laser- focused on the U.S. only: “America must Apologize!” 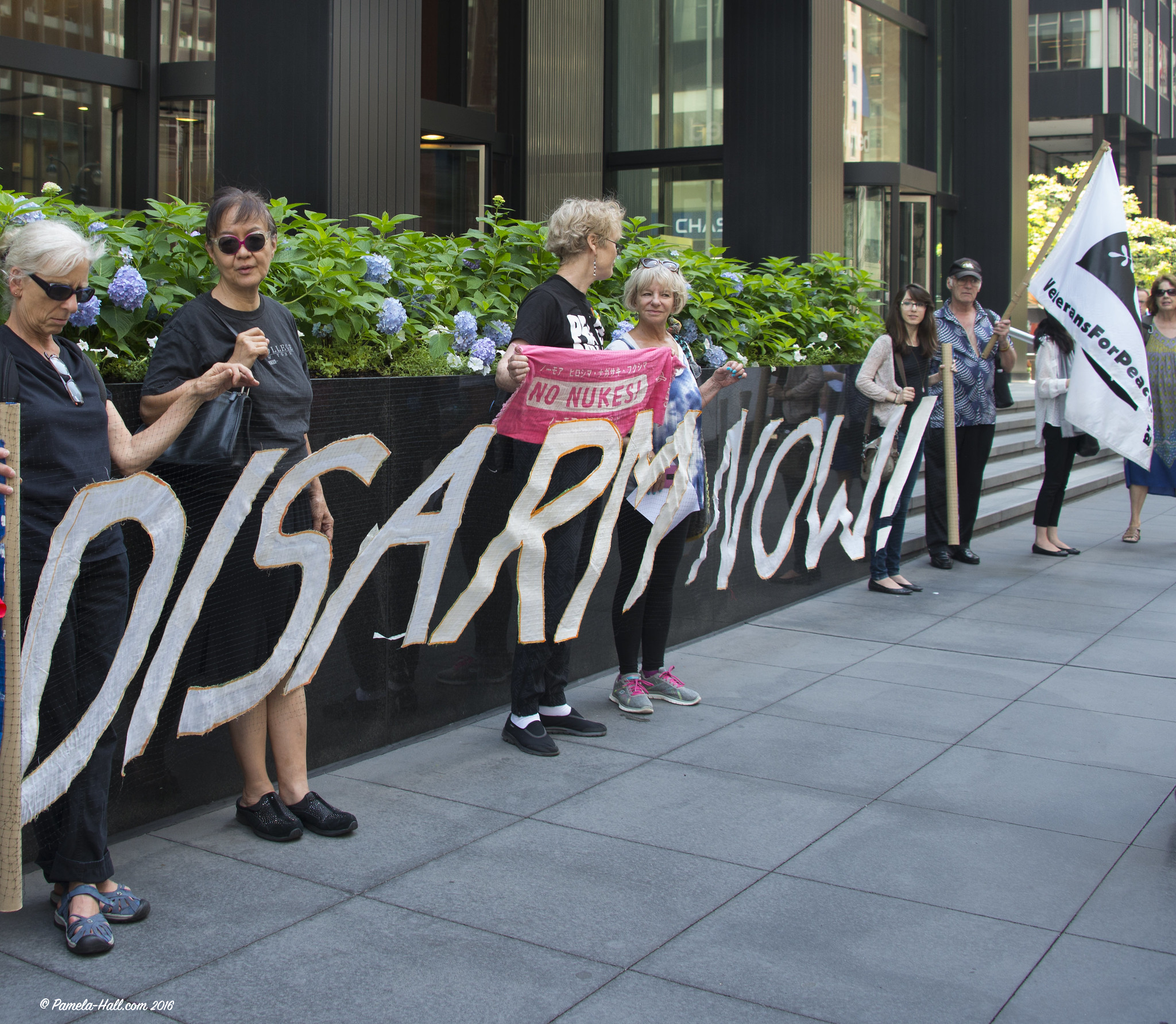 Did the Japanese press, reporting on Hiroshima & Nagasaki, acknowledge their country’s deliberate actions that day in December of ’41, that lead to those fateful days in August of ’45? 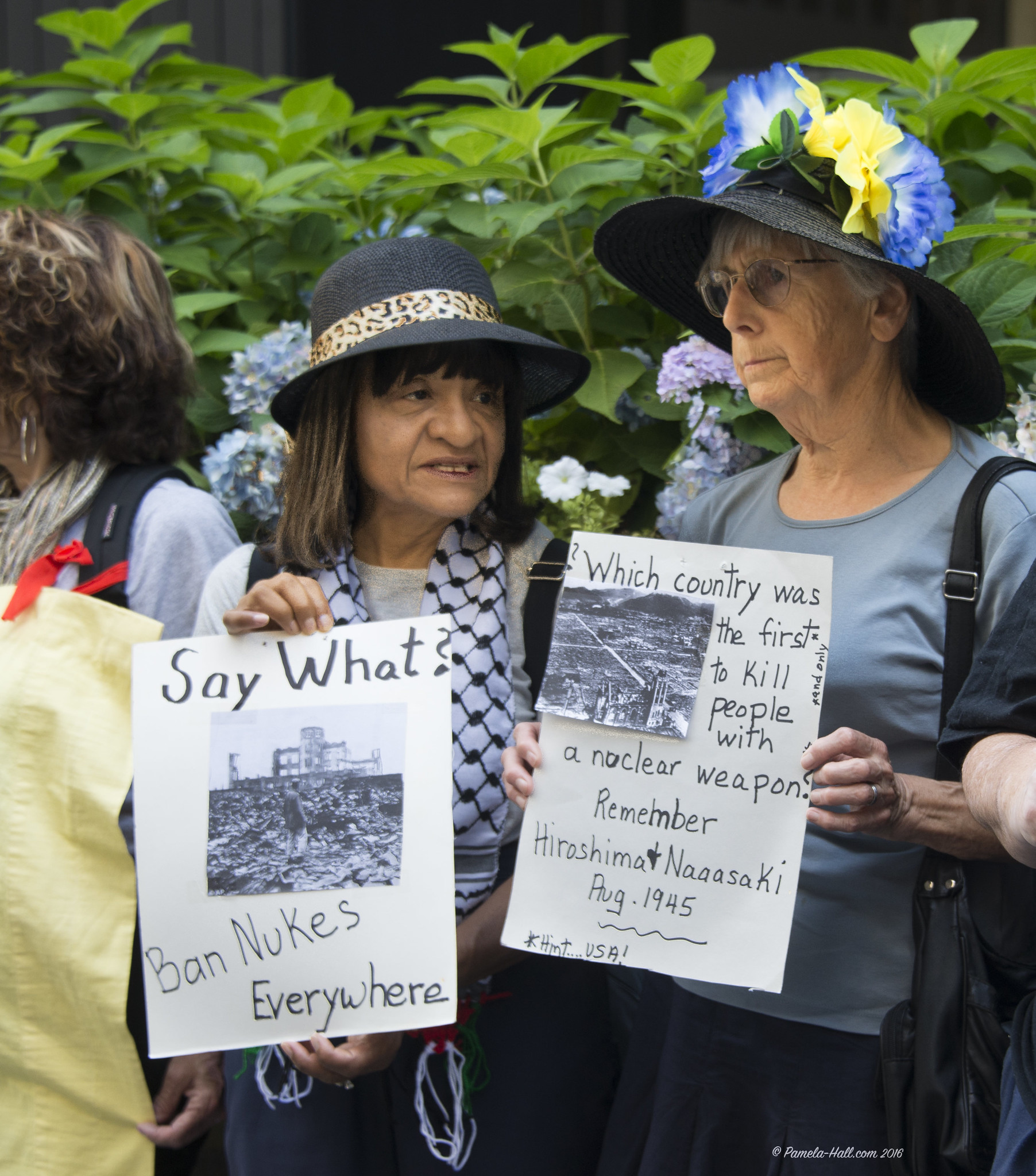 Perhaps not, since they were only able to interview the very anti-American Leftists and the American press was a no-show 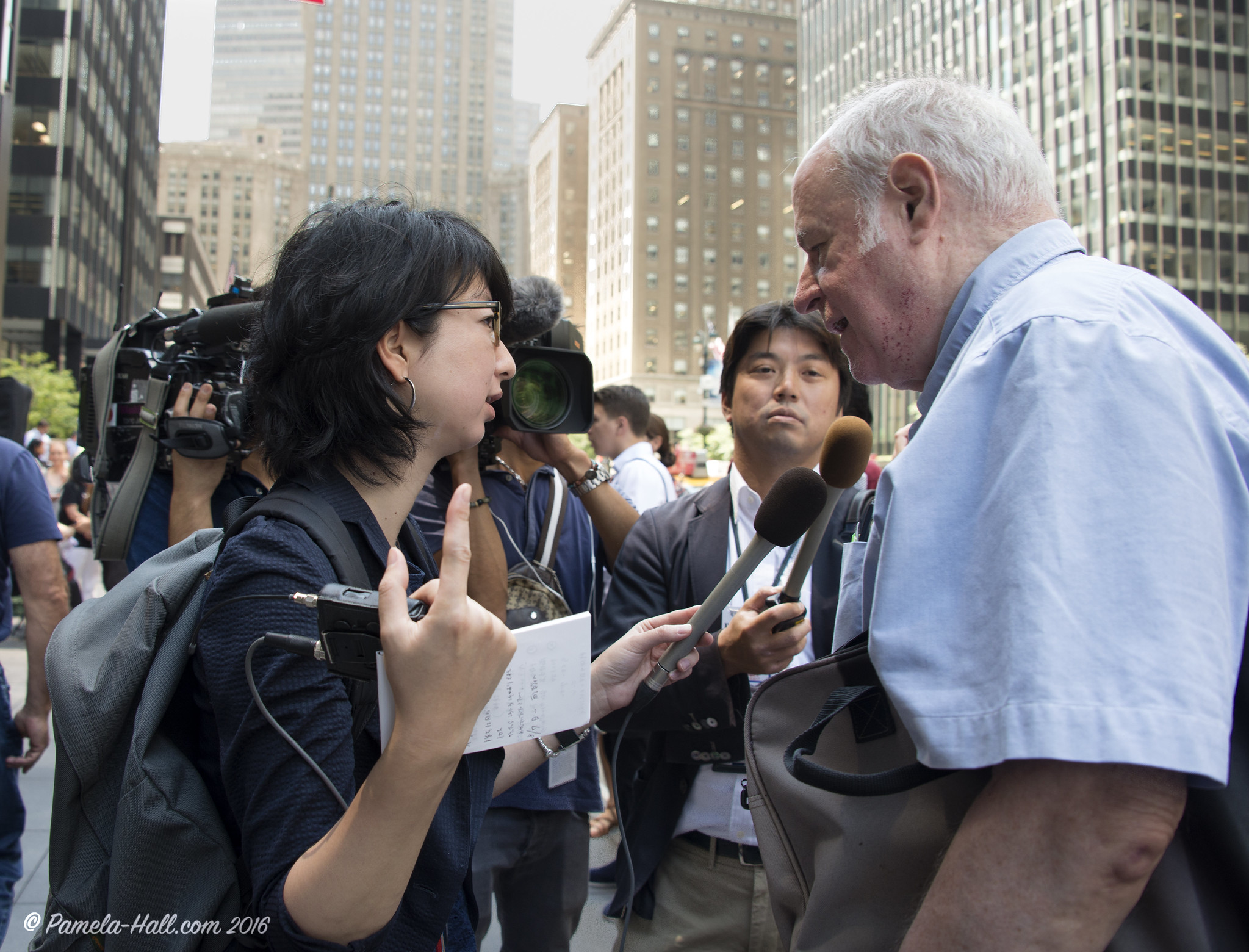 No one on-hand to challenge the lies. The facts, history be damned. 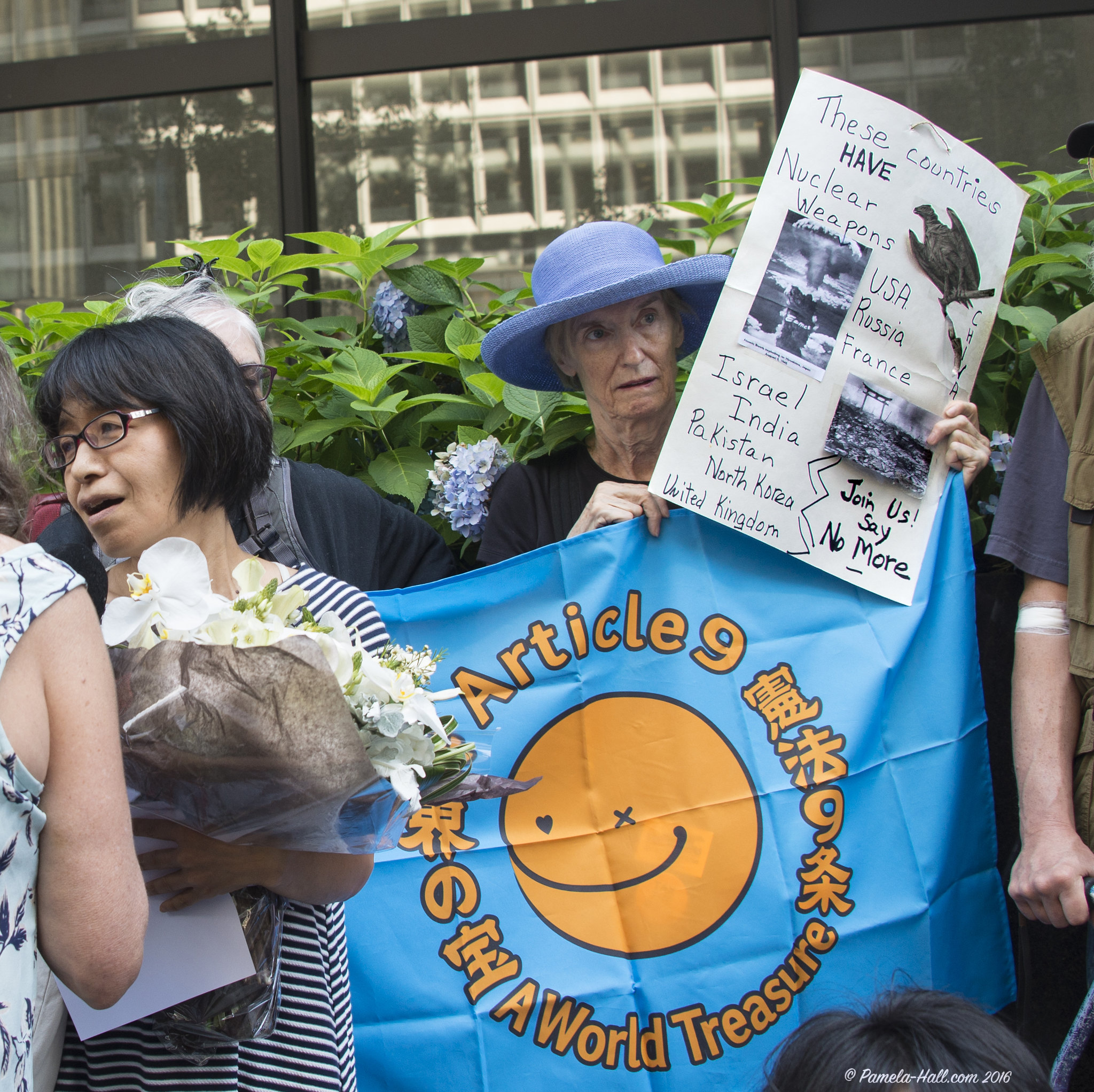 What about IRAN?  If only there had been protestors like this man at a pro-Israel/ anti-Nuclear Iran Rally in 2015. Nope. Not this day in 2016 [Cue choir of crickets] 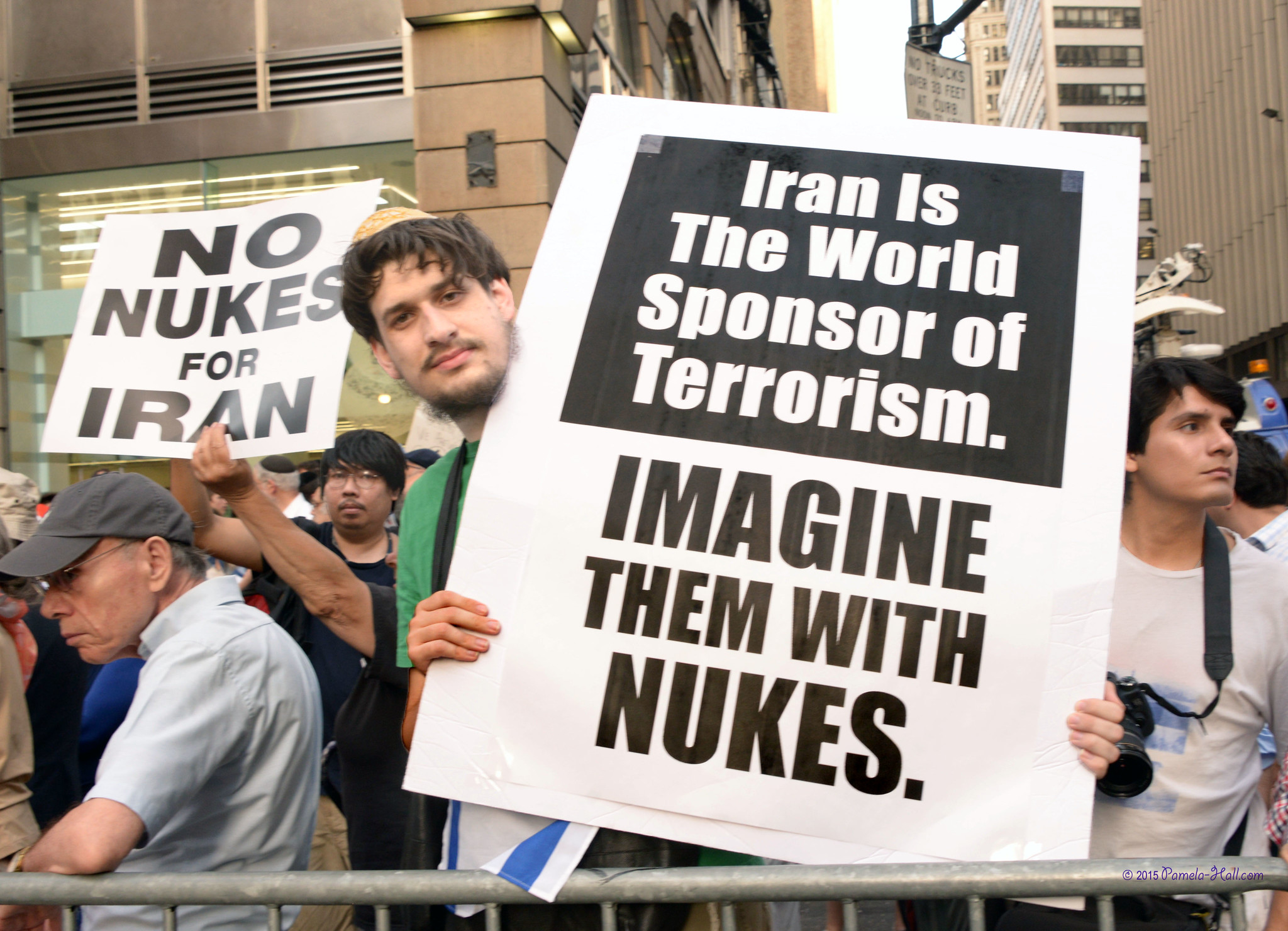 Each delusional speaker outside the Japanese Consulate focused on the U.S. joining those countries that have disarmed or simply don’t have Nukes (yet).

Defense is a Crime. Peace through Disarmament! No Nukes. No Way. No How! 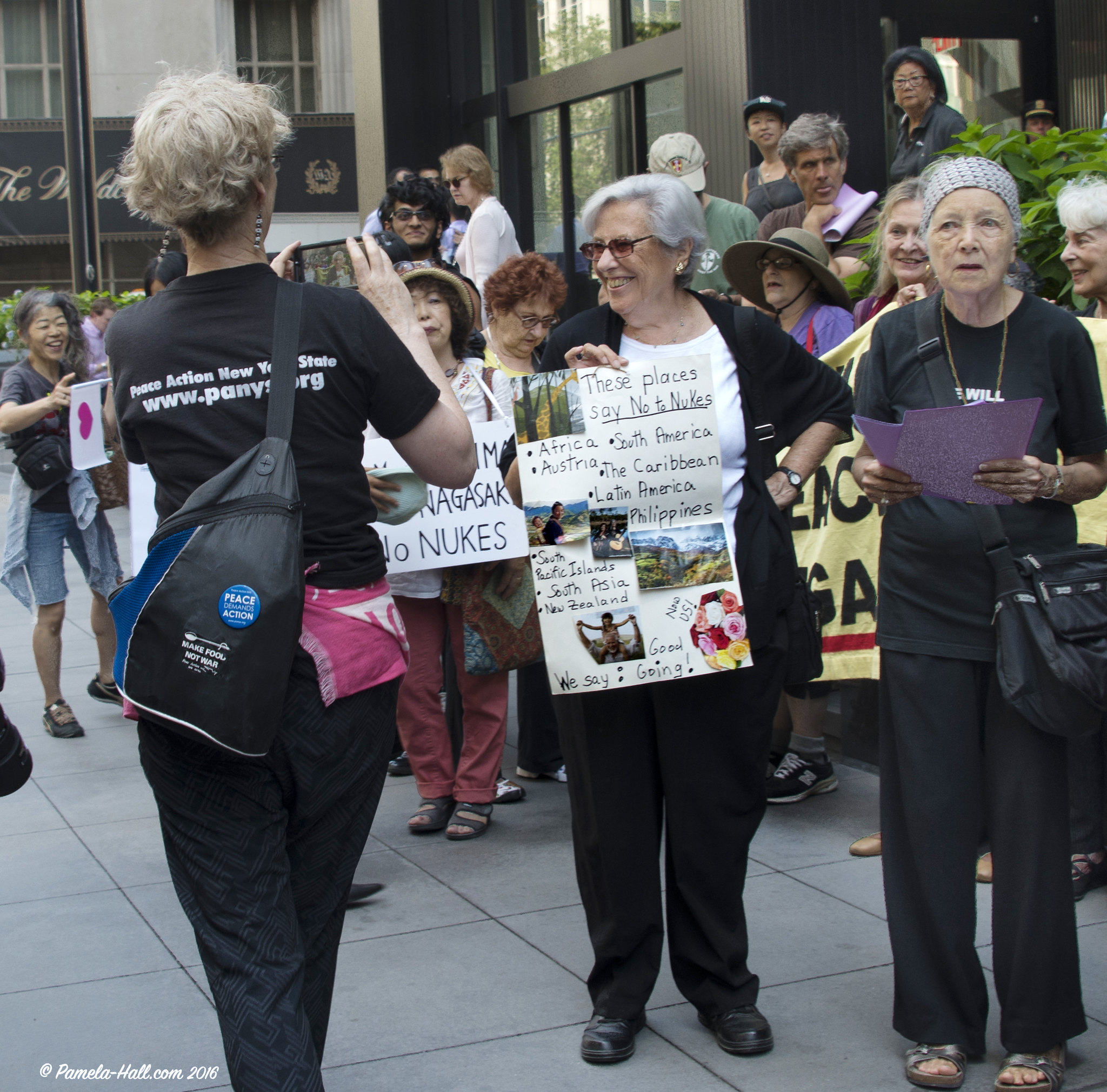 In the spirit of “NO MORE WAR”, there were plenty of hootenanny songs, as well as speeches. 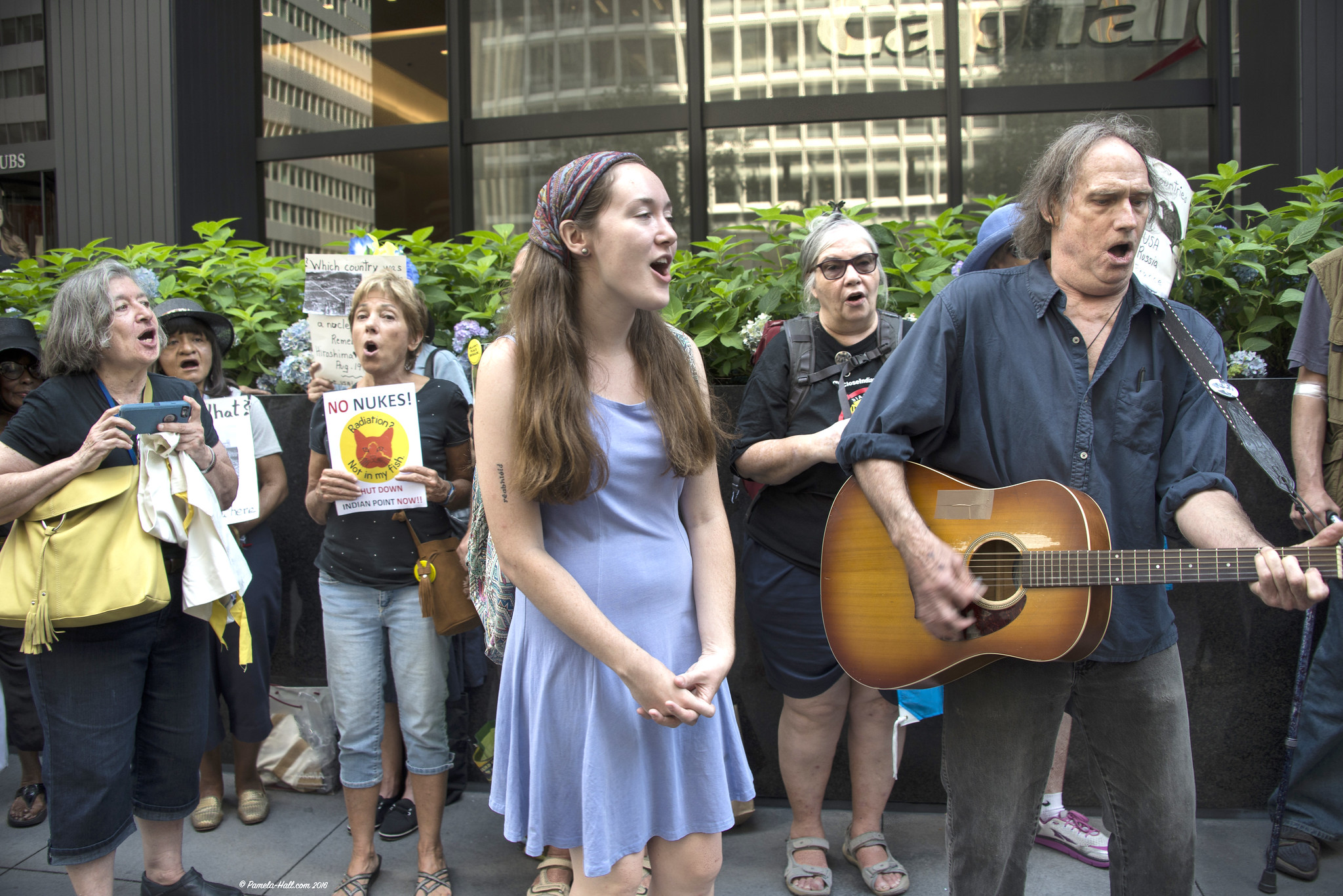 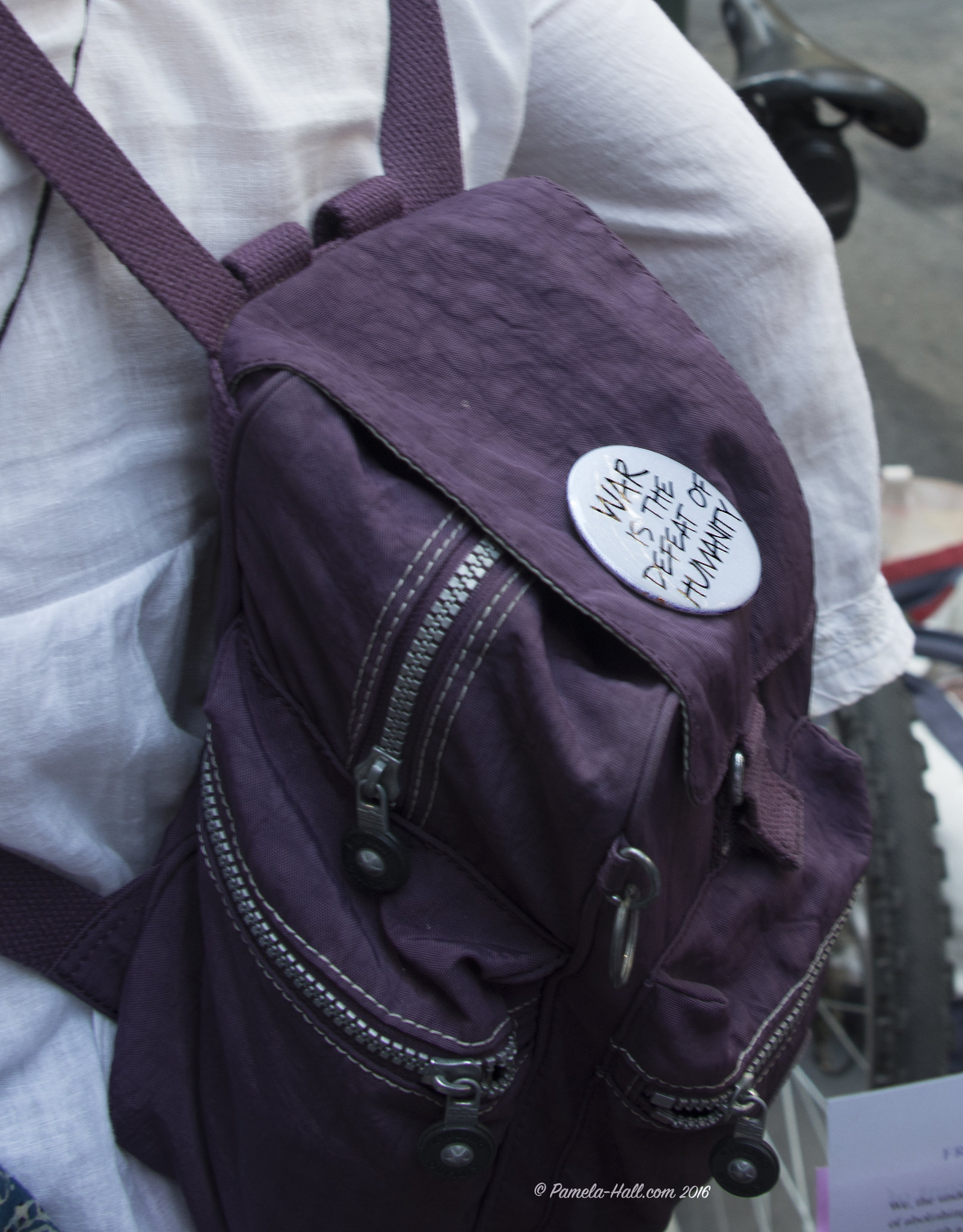 And pithy anti-war memes. “War is the Defeat of Humanity”, “WAR is NEVER the Answer”, “Peace Demands Action”, “Make Food Not War” , “BE HUMAN” and Apologize!


The most dynamic religion of the last hundred years has been leftism. Not Christianity and not Islam. Leftism. 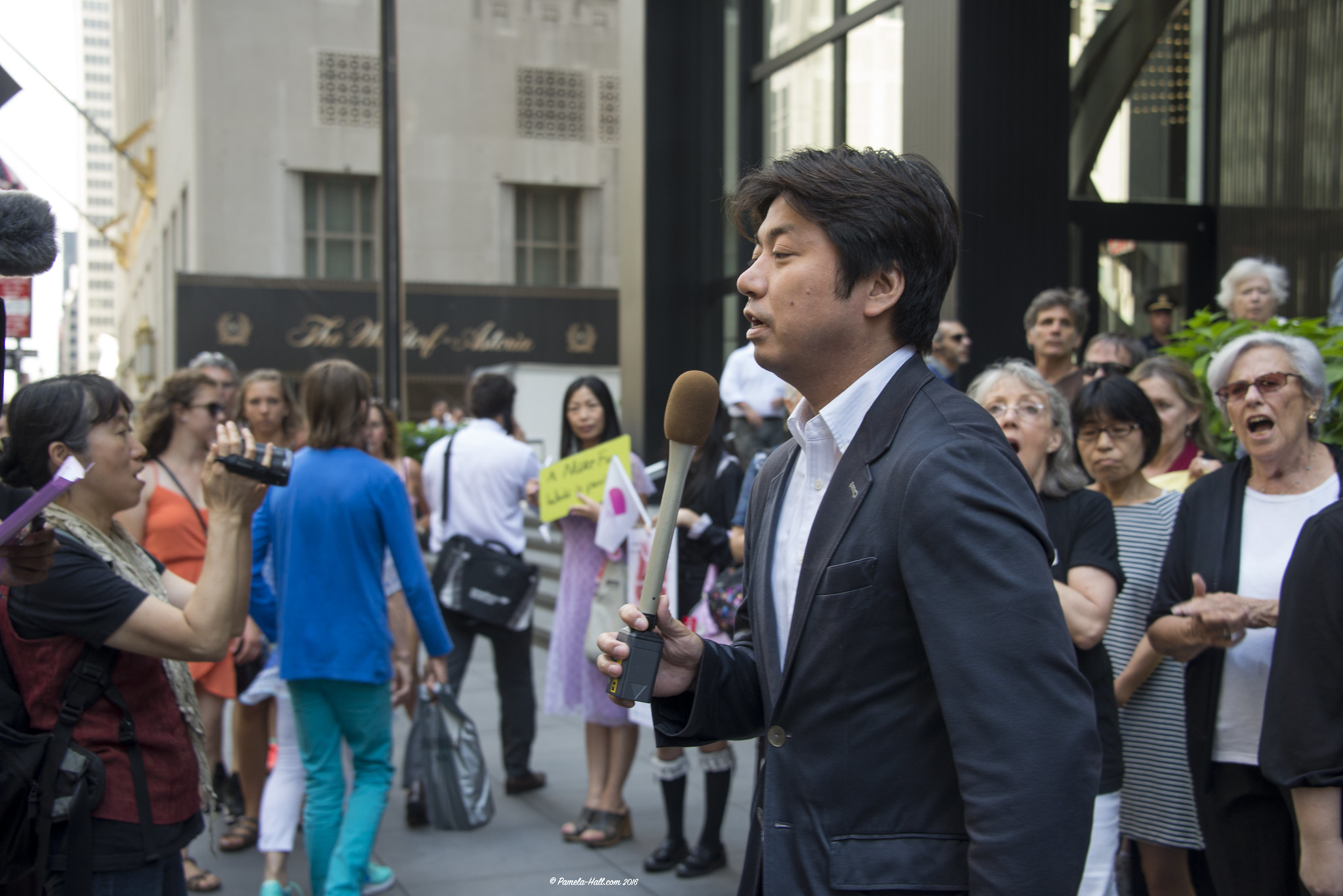 The speakers were introduced by Rachel Clark: Interpreter, global coordinator and a volunteer staff member of Peace Boat US New York office. 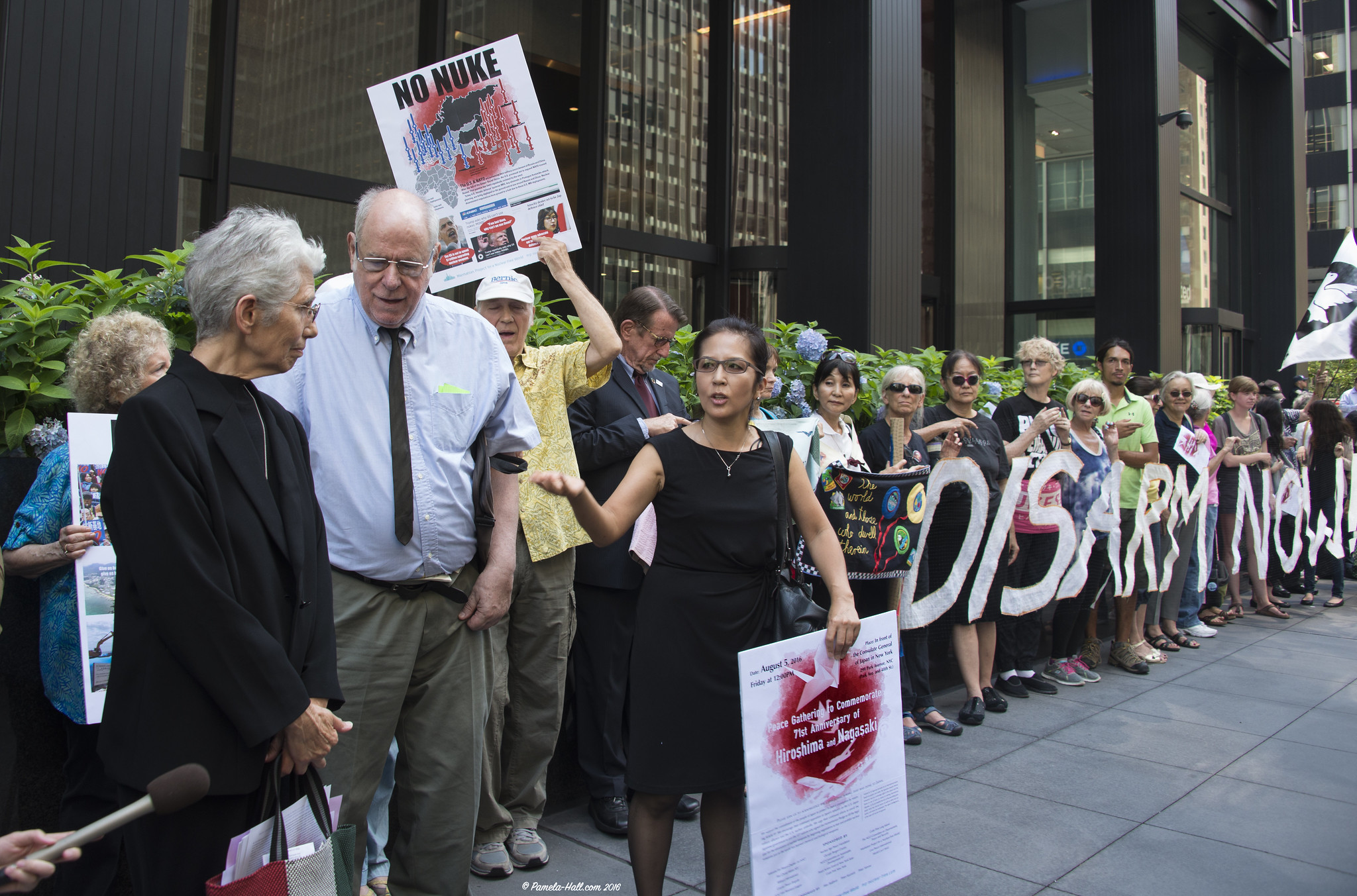 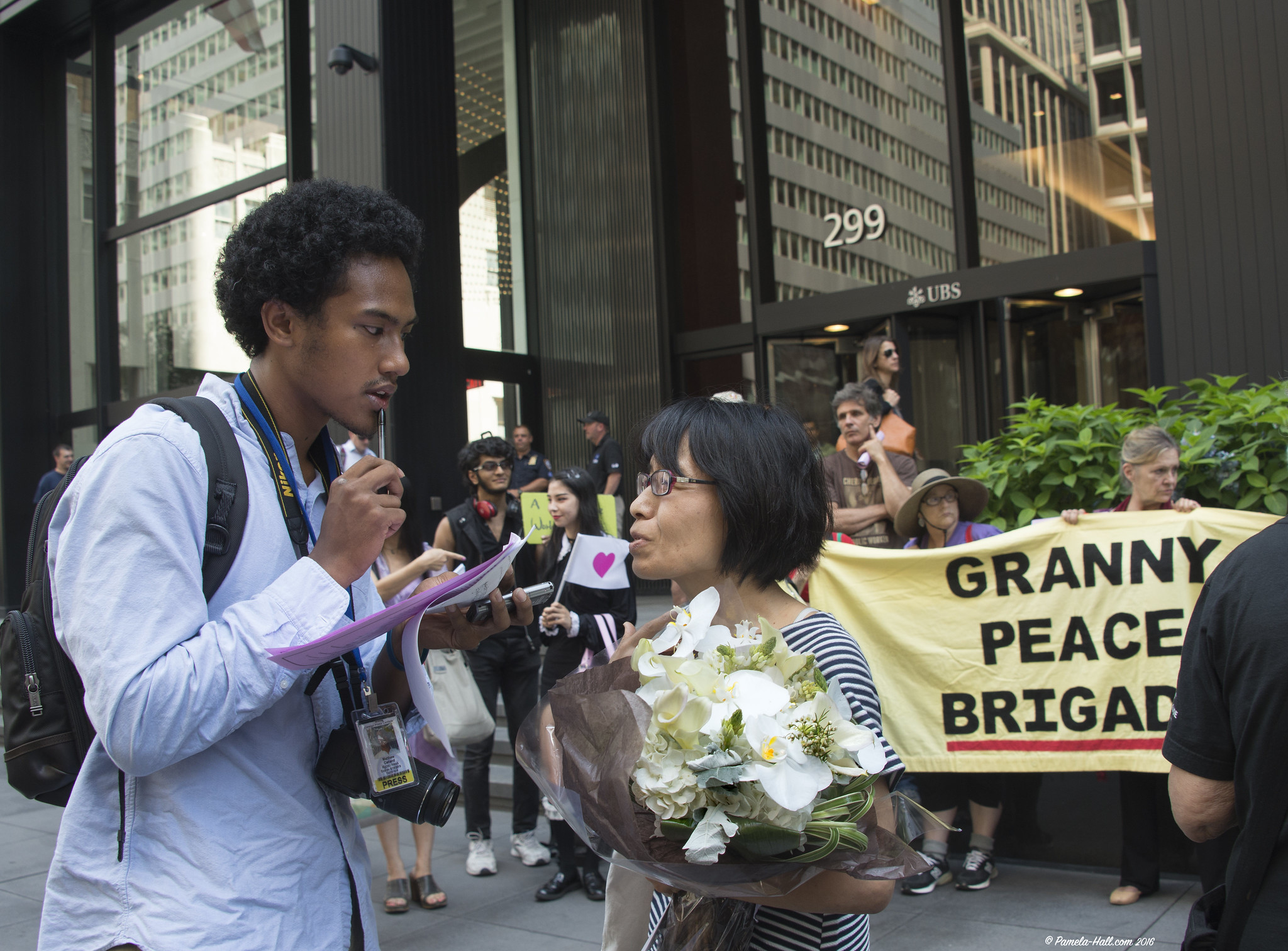 Ms. Taguchi was presented with letters and flowers by the two Pax Christi Sisters and from Veterans For Peace, Dr. Tom Fasy, MD, a board certified pathologist with a longstanding interest in uranium toxicology.

In the Video Playlist, the transcribed statements of the speakers are placed under each video at You Tube. [the street noise was not always helpful due to lunch-hour cars honking]

Article 9 of the Japanese Constitution (日本国憲法第9条 Nihonkokukenpō dai kyū-jō ?) is a clause in the national Constitution of Japan outlawing war as a means to settle international disputes involving the state. The Constitution came into effect on May 3, 1947, following World War II.


But, even the strongly worded Article 9 has gone through some changes, 70 years later, making the “Pacified” Left most unhappy. 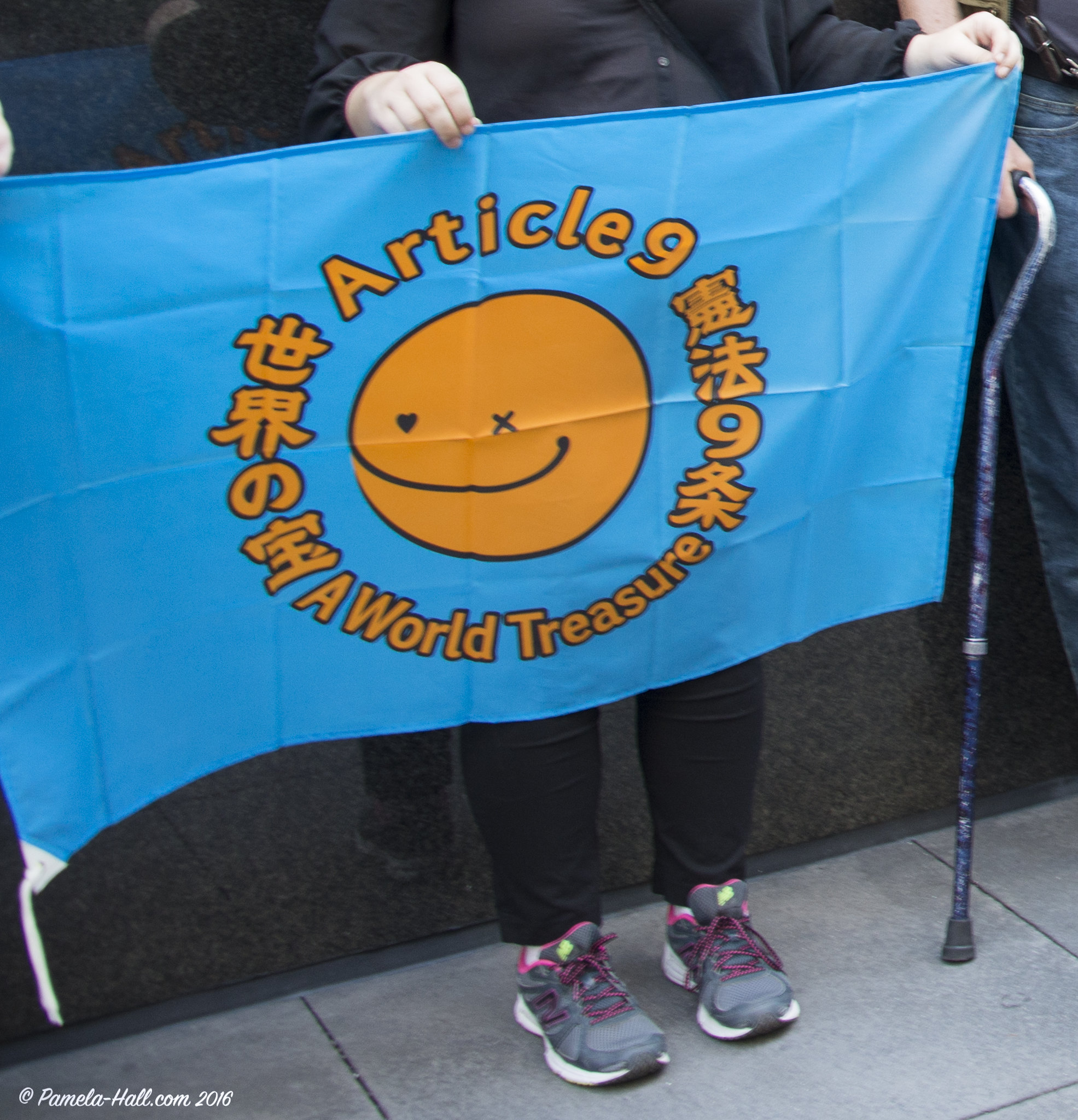 Article 9 has been re-interpreted to allow for “collective self-defense.”Japanese forces will now be able to assist the U.S. and other allies if those allies were attacked, although there would still be limits on the scope and scale of Japanese assistance …. that Japan could now shoot down a North Korean missile fired at the U.S. and provide logistical support to South Korea if Pyongyang invaded, but could not deploy Japanese troops to Korea.


Today, 71 years after the A-bombs were dropped, the Japan of the 20th and 21st century seems to be much the better for the U.S. ending that brutal war.  But, such facts revealed can be oh, so inconvenient. (click picture to enlarge the protest mega-statement)

Should the A-bomb, the Nuclear Bomb, never have been created? Is it possible to rid the world of Nuclear power now that it exists? Are Nuclear Bans possible? Wise? Necessary? 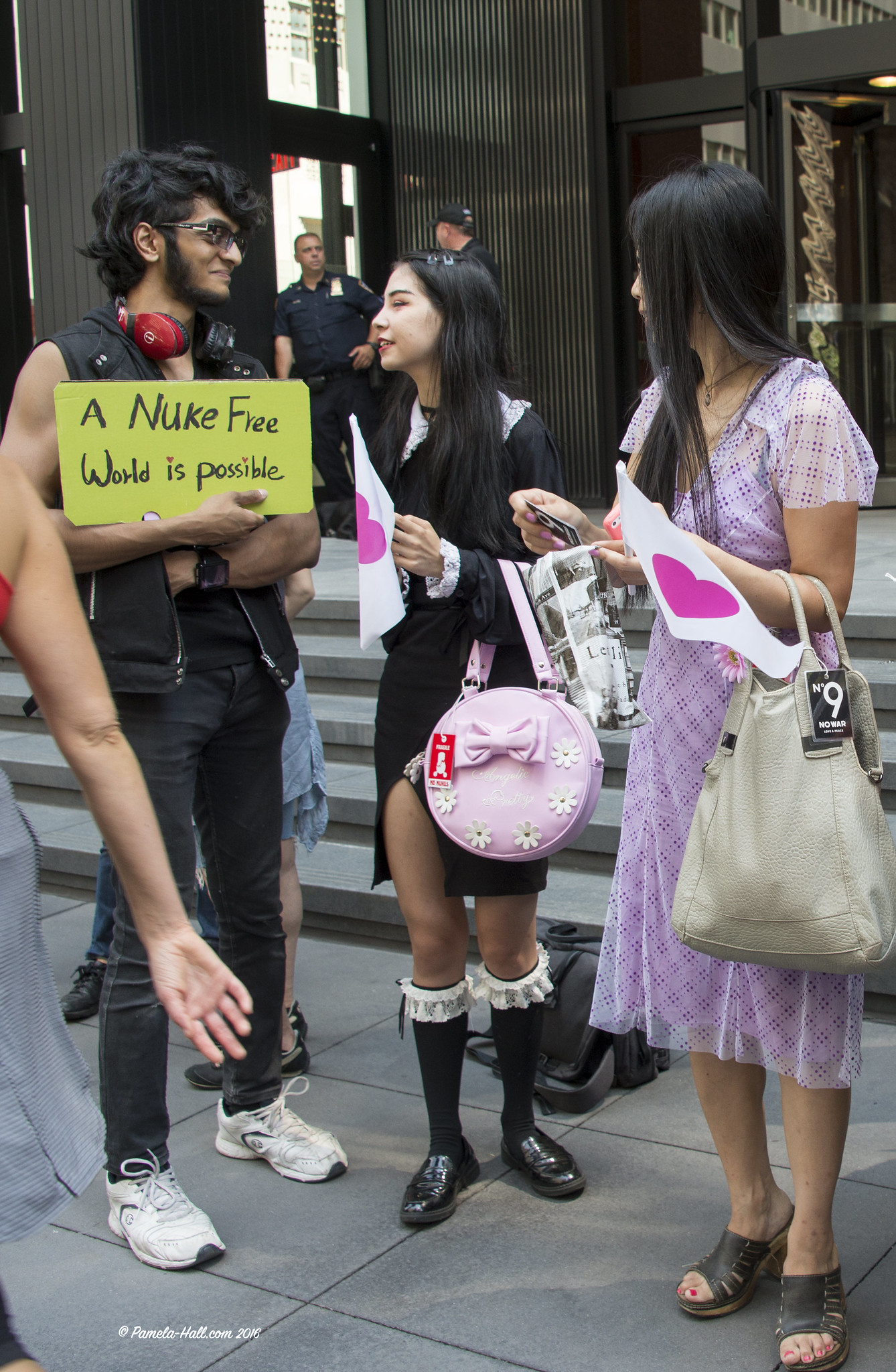 
Our allies are freaked out about the prospect of no first use. They have long relied on our nuclear umbrella, and if it is being pulled back, countries like South Korea and Japan will need to reconsider their decisions to forswear nuclear weapons. This is why no first use would contradict President Obama’s opposition to nuclear proliferation, and make Global Zero — the disarmament movement’s goal of a world free of nuclear weapons — even more of a pipe dream.

After decades of indoctrination by the Howard Zinn/Bill Ayers/Saul Alinsky-John Deweys, can we hope to take back our schools? Our media? Our governments.

Or is it too late to repair our collective psyche? Their Mission Accomplished:
“America Bad.” Period. 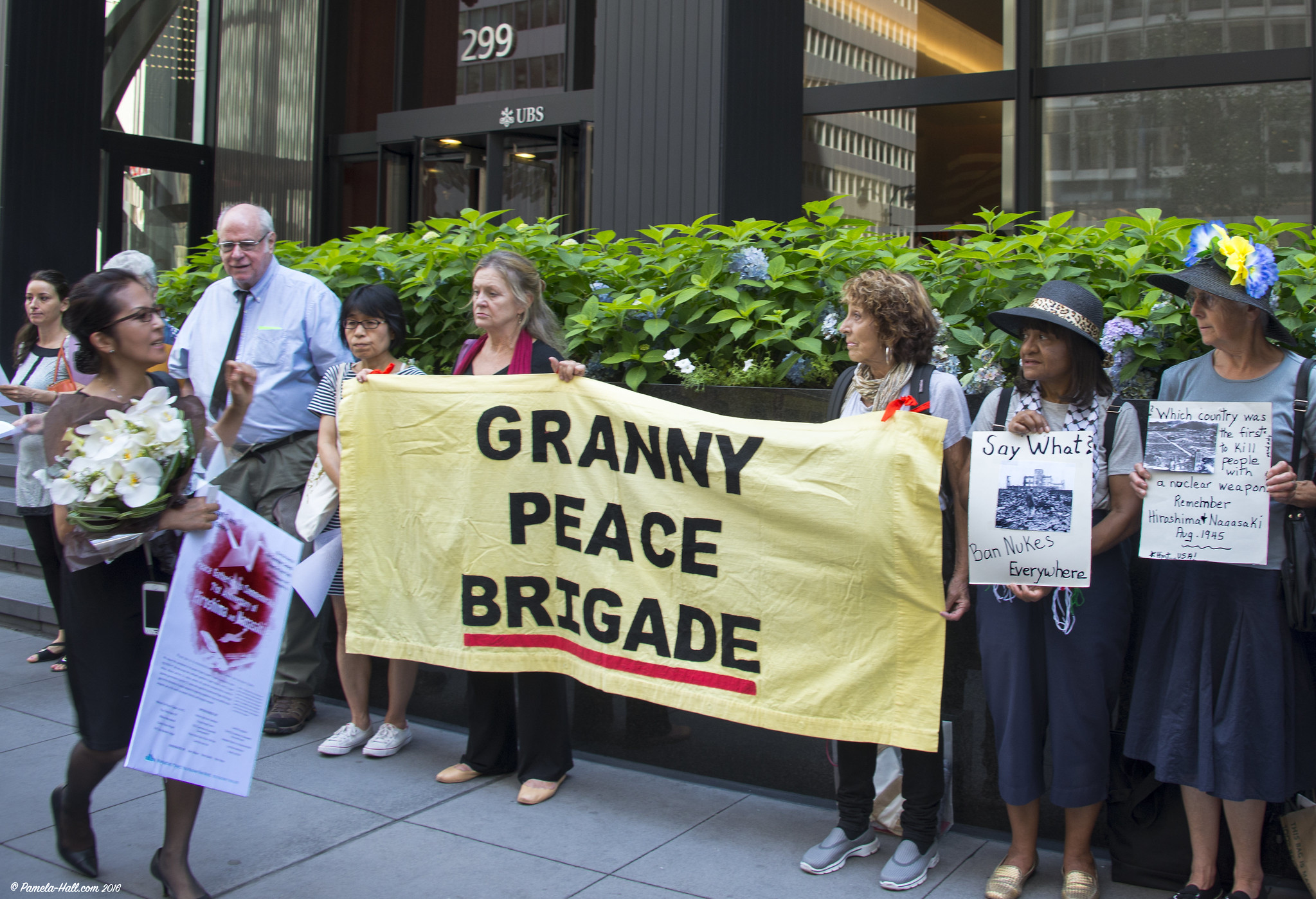 Come November, Can America “Hope to be Great Again”?

The Future. It’s a terrible thing to waste.

++
[All Photos and Videos are the property of Pamela Hall]
Posted by Red Squirrel (Pamela Hall) at 4:53 PM No comments: