October 18, 2015 - NYC - Times SquarePro-Israel Rally (Stop The Terror) VS  NYC Students for Justice in "Palestine" (Terror is their game). 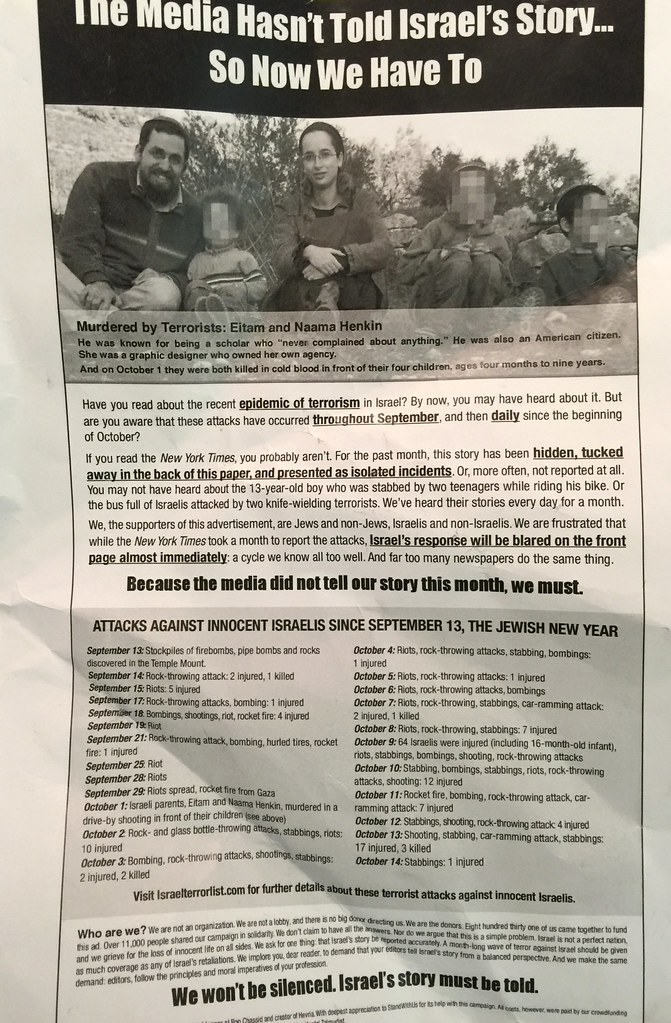 As usual, media coverage of the pro-Israel rally vs the "Pali-Commie" protest was NIL. But, the cost to the city- the public purse- just so our rights to peacefully assemble are not infringed upon, must be a dear expense.

A 'ton' of police came out for these two events (mostly attending to  the Lefties, of course) The police were everywhere, including the plain-clothes cops that you could easily spot. The motor cops, too.
With their LOUDDDD sound system in place, on time at 4 pm and supposedly for ONLY an hour (say I with a wink-wink) the Commie/Pali contingent was set-to-go. They claim to have organized their counter-protest in 2 or 3 days ((I have some swamp land for sale if you believe them)


That was Part 1 of the counter protest. Next, Part 2: 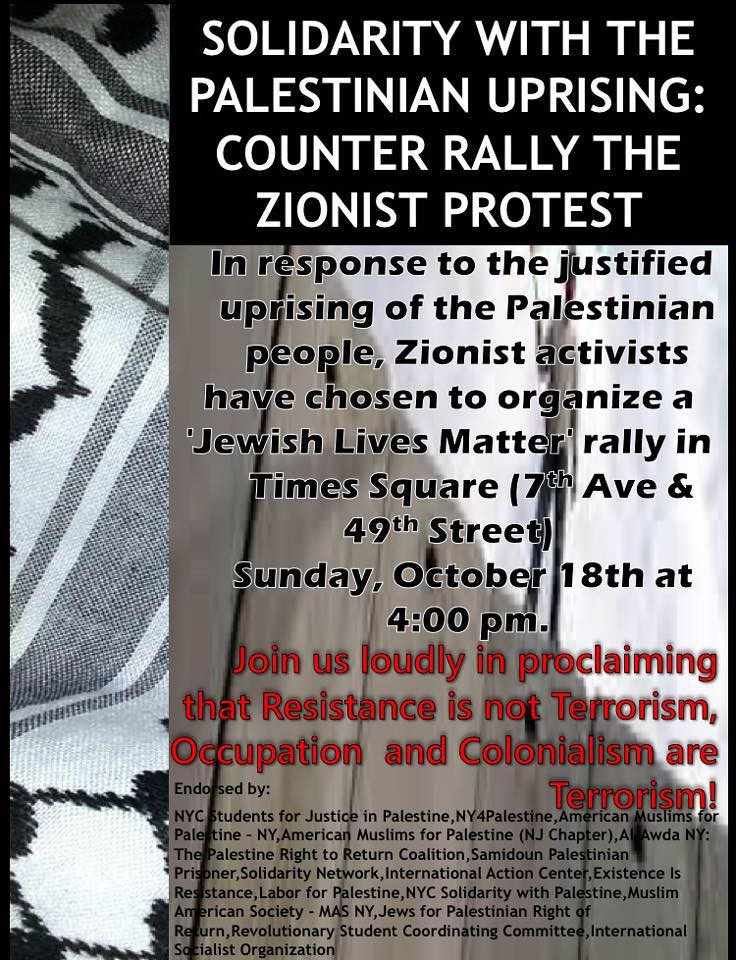 Once they knew the Pro-Israel rally was starting - it started an hour late, around 6 pm, different groups from the pali-left hit-the-street.

Plan A - the JEWS against Israel lined the block in front of the pro-Israel barricades- un-bothered by the police.

At some point they had a policeman shepherding them (to nowhere) He just followed them back and forth in the one block space. 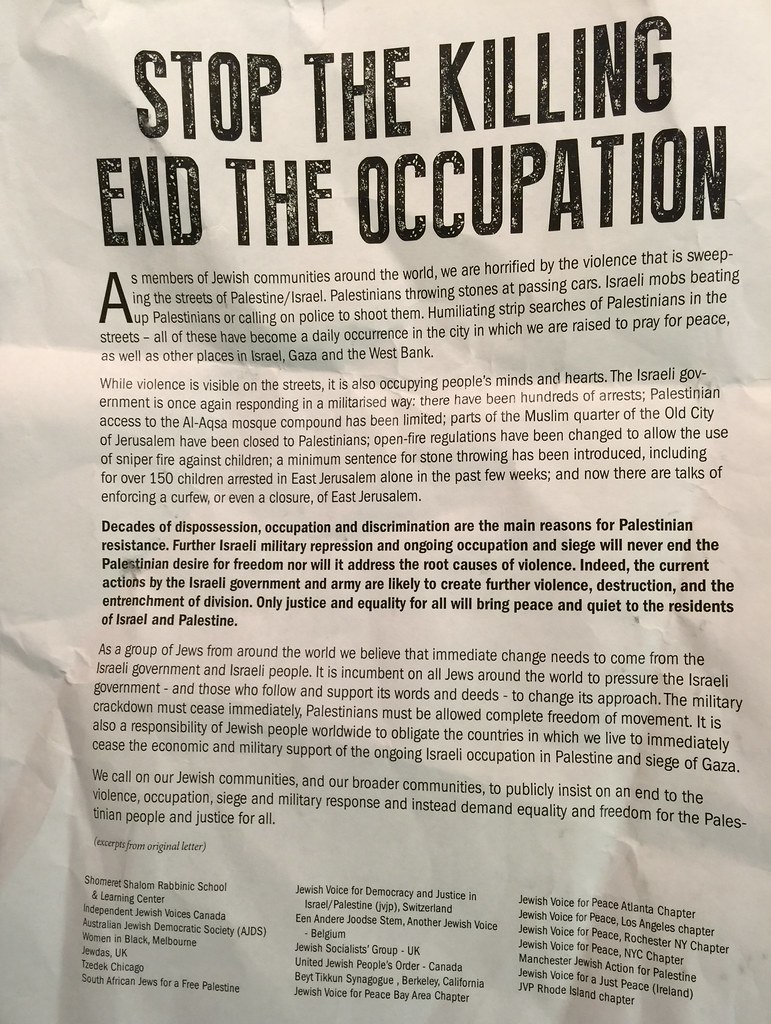 Street decorum requires that they always pretend to be confused... befuddled.... ("How to Protest 101") Constantly changing direction - so, at best, they keep the cops confused.


Holding up signs - in a line- and handing out flyers. Plan B- the younger contingent starts walking AROUND the Pro Pally barricades. SHOUTING SHOUTING SHOUTTTING their chants. (Mostly "free free "palistine" mixed with "Occupation no More" and "Israel is a Racist State") Once Plan B caused enough commotion, the police FINALLY closed off the sidewalks. Leaving Troop B to SCREAM at the stage from the cross walk at 47th street (and IN 47th street-blocking the cross town traffic.) They managed to pull that off for awhile, as well. And the police basically, WATCHED.

And now, Part 3 - the coup de grace - the SLOW CRAWL aka MARCH - They pulled this off in a 5 blk square, ending back at their pen on 7th avenue, after 'walking' VERRRY slowly.

Blocking south-bound traffic on 7th avenue by bunching up at Broadway (a short block away and going no where 'fast', so that the scrunched-up 20-somethings in front of the the pro-Israel rally could SCRREEEAM for 10-15 minutes.

The YOUNGER participants at the PRO Israel/Stop The Terror rally crammed themselves against their barricades facing north - in front of the ANTI- Israel crowd (facing south) and the shouting matches were ON.

I stood a few feet from - Caleb Maupin - who now reports for Iran's Press TV. He was beaming with PRIDE. After all, chaos, is a requirement of any planned Commie insurgency. Meanwhile Raja Abdulhaq - working so pleasantly WITH the police - was wrangling any stray 'palis', nudging them nicely back to their side-of-the-street.

Videos of the "Pali" Commie Crawl- Part 1 the Crawl begins


Eventually, the slow-crawl picked up speed - so easily- once the screaming was exhausted- and marched (no need to crawl now) to 8th Ave, then 50th, and back to 7th Ave.
Even though a large block away on 50th that huge "Pali" flag and chants were quite visible and audible.

Once back to 7th Ave,  the"Palis" STAYED on. Beaming- Chanting- Jumping around. Basically acting like the LUNATICS they are while insanely screaming their success. A protest that was supposed to last ONLY an hour, ending at 5 pm, went way past 7 pm.

"Notice the brave girl waving the Israeli flag across the street from the anti-Israel protest. The cops tried briefly to get her to leave. No matter, Nancy Mansour thug-in charge, and her fellow thugs from Resistance is Existence - CHASED her from 7th Avenue."

And Tom D made them observation I had, while watching the Provocateurs in action: "Please NOTE - these Agent Provocateurs  had an unfettered use of the area around the Pro-Israel site. Police simply followed them around."

Closing Thoughts: In this PR battle for the TRUTH, are minds changed? Can the tide be turned? Is confusion the winner? (The soc.commie.anarchist.'muslim/"pali" chums thrive on confusion)  Cocky. Preening. (nauseating) While the good kids on the pro-Israel side.(G-d Bless them) Hang in there. With HOPE.

Thankful to see them. Proud. Positive. Honest. Confident. They need our support and encouragement for them to succeed. (Nuff said)

Since I covered the Third Intifada Rally more than a week ago,  I came across this article : A Short History of leftist Violence.

For more than a year, there’s been sustained debate about whether the ongoing tensions and fits of violence in Israel, the West Bank, and in particular, Jerusalem, would fully culminate in a third Palestinian uprising.
In recent months, amid failed peace talks, continued fallout from the latest war in Gaza, politically motivated riots and car attacks, deadly rock-throwing and deadly responses to rock-throwing, stabbings, fatal  arson and shootings, clashes at holy sites, the expansion of settlements and price-tag attacks, the rhetorical canceling of both previous peace deals, and the future peace process, the answer seems to increasingly be this: A Third Intifada is here and it doesn’t resemble the previous two.


Final thoughts from AFSI (American For A Safe Israel) - Will It Be the "Fire Next Time"?- You Are Needed at the Rallies!!

Show your support for Israel! At this time of great danger to Israel and her citizens we must take to the streets to show our support and show the world that we will not remain silent.


We cannot ignore the terror. TERROR WILL NOT DISAPPEAR IF WE TURN AWAY FROM IT. WE MUST CONFRONT IT. Here, in relative safety where the battlefield is public opinion, that means exposing and opposing it.

Jewish Blood Is NOT CHEAP.
The truth must be seen as well as heard. With more and more rallies supporting Israel on-the-streets, perhaps the truth will manage to be seen AND  heard by those willing to listen. Putting an END to the Third Intifada is our goal.

WE CAN NOT REMAIN SILENT.
Posted by Red Squirrel (Pamela Hall) at 4:02 PM No comments:

On October 6, 2015,  the "forces of Fakestine" called for a "Day of Rage" falsely claiming the  indiscriminate  killings of Fakestinian youth. While ignoring the TRUTH : these Muslim youths are terrorists who are INDISCRIMINATELY murdering the people of Israel.

The THIRD Intifada (a euphemism for DEATH to Israel/ Death to the Jews) was mentioned often at this rage-filled protest, hosted by NY4Palestine  and co-sponsored by:

Familiar faces appeared in the crowd at this protest. Leaders of previous  paleo-protests against Israel who have not been as visible in recent years.

Where have they been? No matter, the Third Intifada pulled them from obscurity. 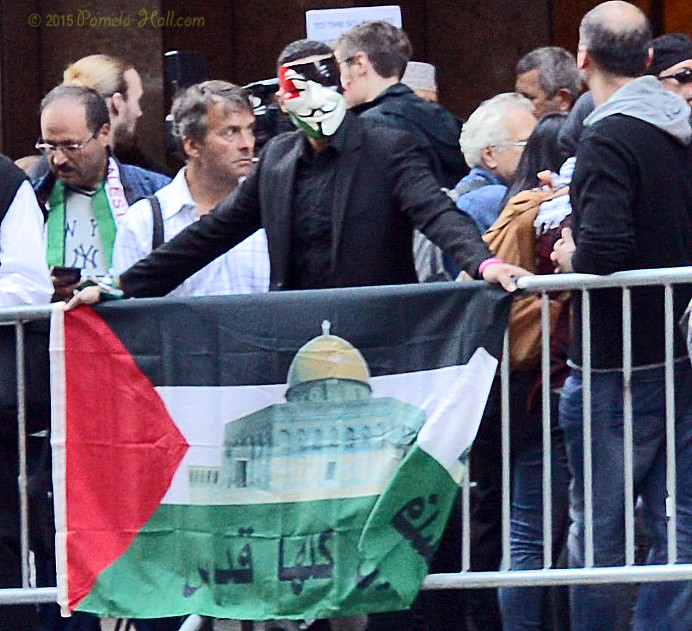 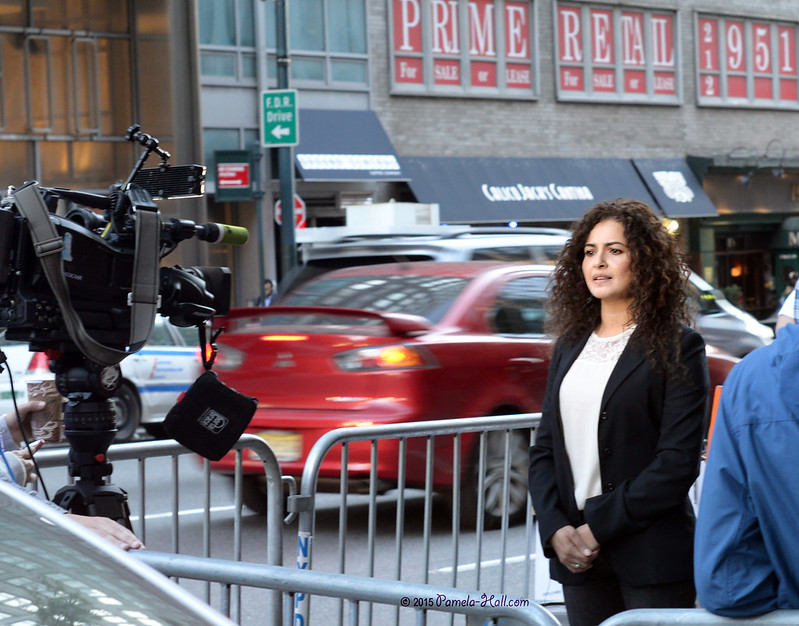 Lamis Deek, attorney to the paleos,  was back running like the girl-in-charge. (missing her ubiquitous coffee cup).


Caleb Maupin, North Korean Commie lover and now a reporter for Iran's Press TV was smugly at hand (Seen to the Right of this picture) 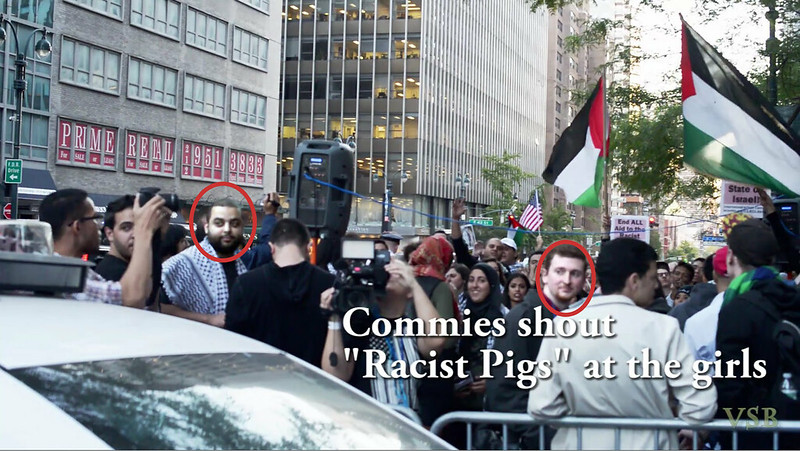 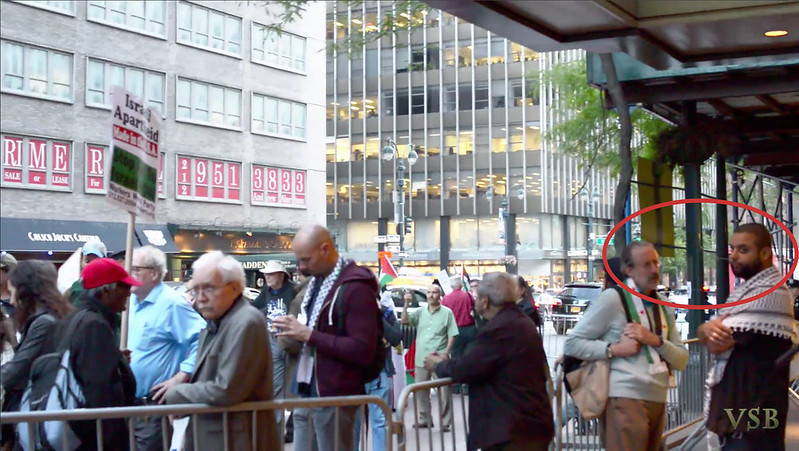 Andy Pollack, the older guy, is a union-pali-illegals-commie agitator always lurking on the edge of the crowd.

This seemed to be a college-age crowd. Perhaps that brought the agitprop-sponsors out to inspire the next gen of paleo-agitators. 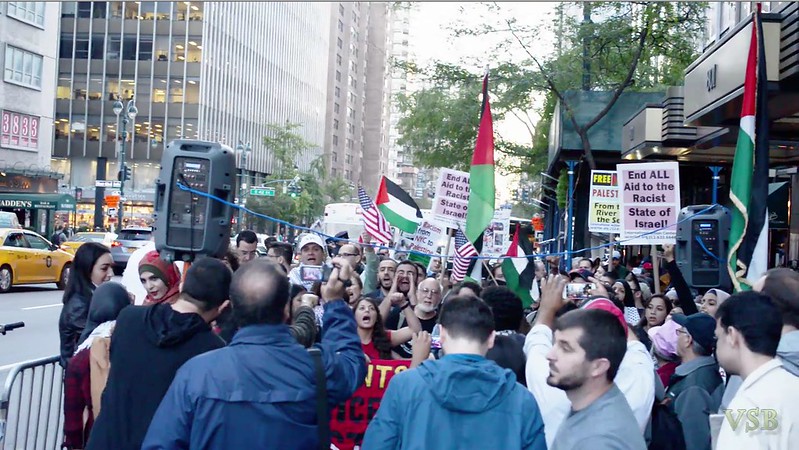 Missing in action- Sara Flounders (IAC) and Bill Doares of the Workers Party. Others, familiar college-age advisors to the college Muslim Groups were also missing, like Dima Abi Saab, an organizer with Al-Awda-NY, who claimed to have been a passenger on the Mavi Marmara.

This seemed to be a guys event - the leaders. As for the distaff participants, there were pretty Muslim girls with flyers - New York 'Students for Justice in Palestine' - 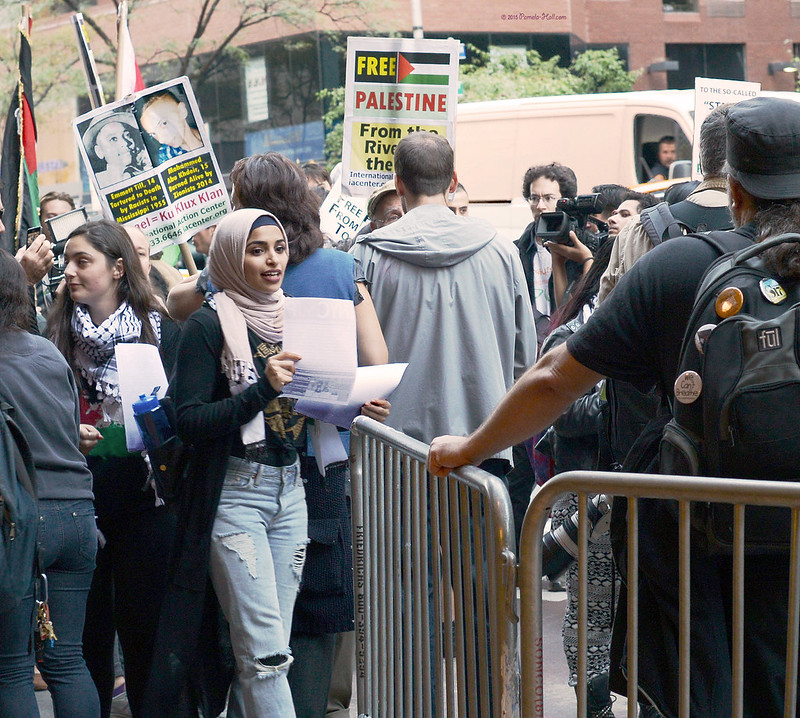 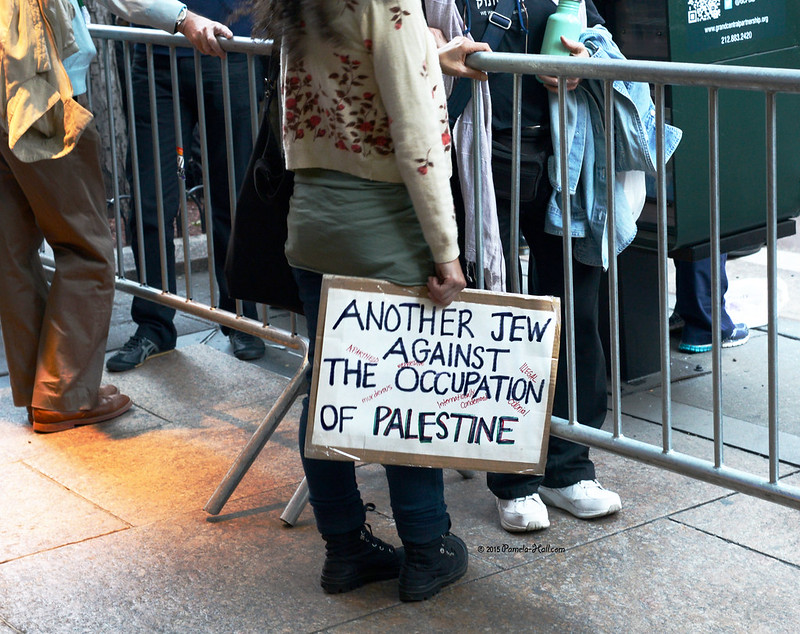 And all pumping Nazi-fists to the sky. 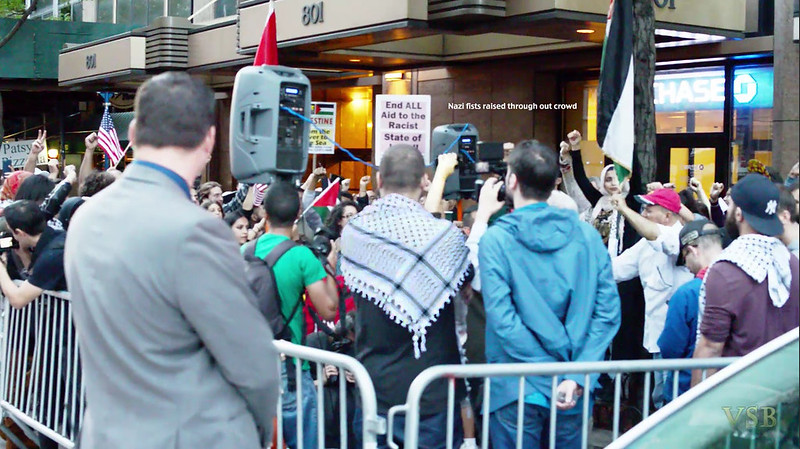 One of the protest leaders was an argumentative Paleo in the black shirt, Raja Abdulhaq, a huge Muslim Brotherhood supporter. 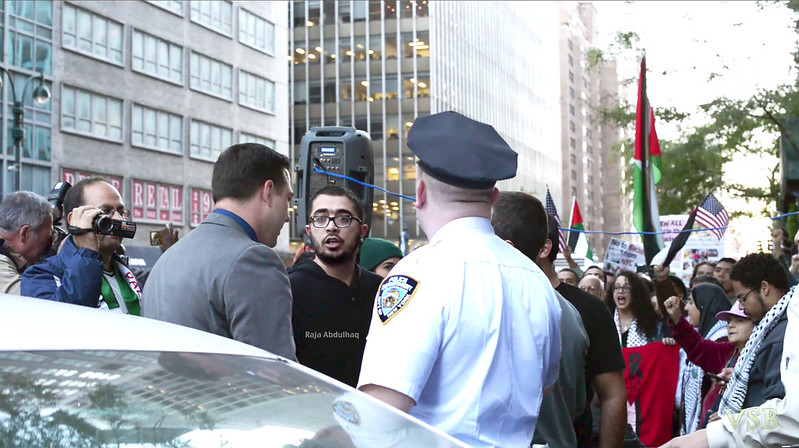 Also, working the crowd, was fellow Israel basher (kuffiya-guy with Andy Pollack) for whom I have no name, but I KNOW his face ...


MIA : Eddie Pages (their 20 something photographer) and Nancy Mansour (aka "Harrabic Tubman") of Existence is Resistance. What  happened to that angry, abusive Brit. Is she still hanging out in Fakestine ? Apparently not. UPDATE: Nancy will be on-the-scene screening T-shirts at the next big Anti- Israel/Solidarity with the Third Intifada Protest on October 18, 2015.


Back to October 6th -New and refreshing participation at the Paleo-protest as the anti Israel chants droned on and on three brave Israeli girls boldly sang and challenged those Paleo-Lies:

"Settlers, settlers go back home, Palestine is ours alone!" INTIFADA! INTIFADA!"From the river to the sea, Palestine will be free!" "From CUNY to Palestine, occupation is a crime"
Part 2 -video

The girls stood right where the crowd could see them, and the cops left them alone! That was a thrill to see. 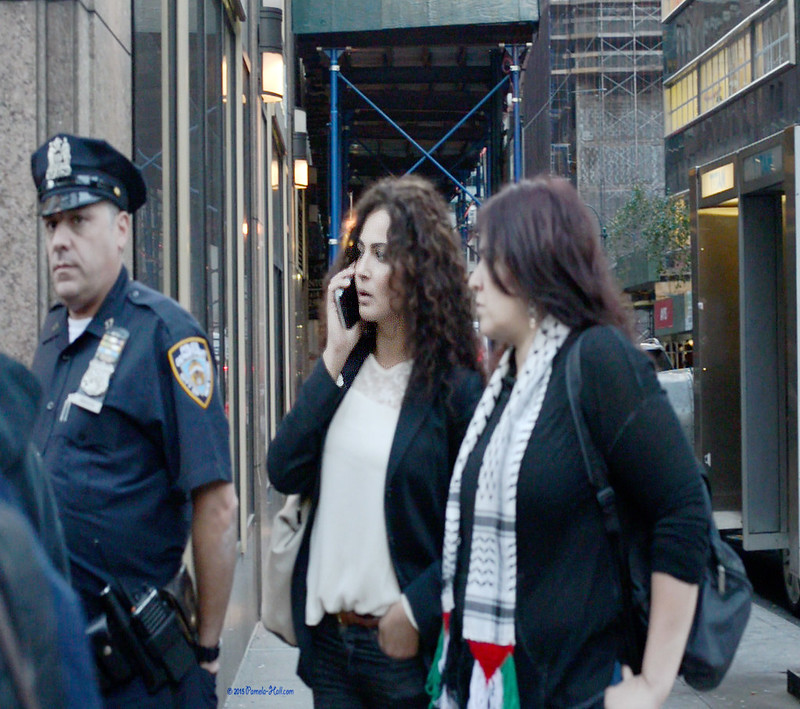 (the cops usually hop to Lamis Deek - whatever she asks for- but this time her complaints about these young women went ignored. (how NICE)

++
Luckily, coverage of this protest seemed to be limited to a few blogs and TV media that supported the Paleos, like Demotix News : Articles One and Two

The Russian RT-TV (Lamis Deek reported for them)

AND IRAN's Press TV - Caleb Maupin- US #‎infrastructure crumbles, we have no jobs... " But we give $18 Million/Day to Israel.


Activist Vienna Rye filmed the street march to NO WHERE -that she posted on face book- was just a lot of noisy chants (From the River to the Sea , etc) literally marching no where in particular. 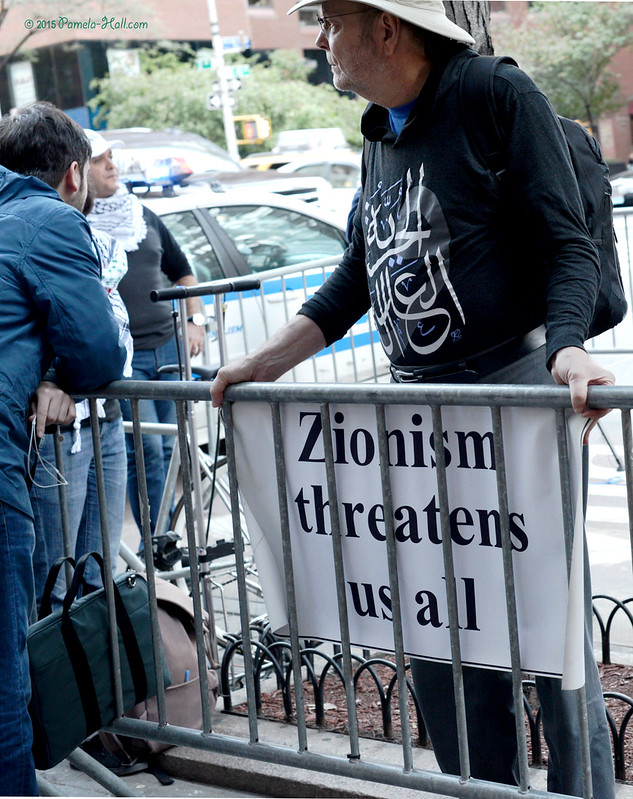 An addendum of thoughts regarding the threats of a genocide  bubbling beneath the surface, always there, like the non-too subtle message on these T-shirts (from 2010).

Mujahideen is the plural form of mujahid (Arabic: مجاهد‎), the term for one engaged in Jihad. Right up there with Intifada NYC. No hidden meanings?  puhlease...

And leading the way, t-shirt wise, in 2007, was the infamous Intifada NYC

The "Paleo" Terror Wave  and the Third Intifada may be here, encouraged by the horrific How to Kill a Jew video. Disturbing events, these horrid, hateful anti-Israel rallies, they should be sent to the dust bin of history, their LIES exposed by film makers like Pierre Rehov who dedicated himself to exposing those lies. Recently Rehov made available these two important videos available.

FROM THE RIVER TO THE SEA: A Call For Genocide

Since I covered the Third Intifada Rally more than a week ago,  I came across this article : A Short History of leftist Violence.

For more than a year, there’s been sustained debate about whether the ongoing tensions and fits of violence in Israel, the West Bank, and in particular, Jerusalem, would fully culminate in a third Palestinian uprising.

In recent months, amid failed peace talks, continued fallout from the latest war in Gaza, politically motivated riots and car attacks, deadly rock-throwing and deadly responses to rock-throwing, stabbings, fatal  arson and shootings, clashes at holy sites, the expansion of settlements and price-tag attacks, the rhetorical canceling of both previous peace deals, and the future peace process, the answer seems to increasingly be this: A Third Intifada is here and it doesn’t resemble the previous two.

Jewish Blood Is NOT CHEAP.
The truth must be seen as well as heard. With more and more rallies supporting Israel on-the-streets, perhaps the truth will manage to be heard by those willing to listen. And seen.
Putting an END to the Third Intifada is our goal.

WE CAN NOT REMAIN SILENT.