The New Times Square, those chairs and thee.... (a short video)

We compiled a few pictures of the Times Square makeover that were taken over the past few months. It was as an excuse to work with the AVS video program...In particular we re-discovered some pictures of the transition from beach chairs to the metal chairs (an opportunity for Bloomy to 'dazzle' the public with a beach chair sculpture?) The chairs even have their own t-shirt . Whatever... it's still an offensive makeover.
Posted by Red Squirrel (Pamela Hall) at 11:53 PM No comments:

For pictures and video of the Dec 5, 2009 rally go to http://vigilantsquirrelbrigade.blogspot.com/2009/12/911-never-forget-us-rally-saysno-to-ksm.html

Staten Island Tea Party will meet-up at the Staten Island Ferry Terminal in time for the 10AM departure.After we disembark we will march up Whitehall Street to Broadway,Broadway to Worth Street and the turn east into Foley Square. The distance is about 1.3 miles and should take us around 45 minutes or less.

The SITP started the idea of marching up Broadway to the event, and it has caught on. We now expect to be joined by other groups from the NY area (including other Tea Party groups and various NYPD and FDNY organization) at different points along the route. Also, received a phone call from Glenn Beck's producer this morning asking for the details of the march and expect FoxNews coverage.

We will pass City Hall Park on Broadway. Rain is expected in the afternoon; an umbrella is probably going to be necessary.

Final quote: Louis L'Amour: "There's no stopping a man who knows he's in the right and keeps on coming..."

And Long Island CSA (Conservative Society For Action) This is their info:

If you would like to meet up with fellow CSA members, please meet a few bocks away from Foley Square at Columbus Park (corner Bayard and Baxter Street). We can then walk the few bocks to Foley Square. Meet time at 11:30 am. MAP
For complete details, please click the follwing link: http://www.keepamericasafe.com/?page_id=1822
NOTE: Some groups, including the Staten Island Tea Party group,are meeting at City Hall Park so they walk past City Hall on their way to Foley Square. That location is at the intersection of Barclay and Broadway. Click the following link for that location and the walking route to Foley Square. MAP We'll all meet at Foley Square at 12:00 Noon.

DAVID BEAMER
David Beamer is the father of Todd Beamer, a passenger on United Flight 93, which was hijacked on September 11.
TIM BROWN
Tim Brown is a retired, decorated 20-year FDNY firefighter and a survivor of the 2001 terrorist attack on the World Trade Center.
DEBRA BURLINGAME
Debra Burlingame is the sister of Charles F. “Chic” Burlingame, III, pilot of American Airlines flight 77, which crashed into the Pentagon on September 11, 2001.
BRIAN DENNEHY
Brian Dennehy is an accliamed actor and will speak on behalf of his friend Judea Pearl, the father of reporter Danny Pearl, who Khalid Shiekh Mohammed admits murdering.
CURTIS SLIWA
Curtis Sliwa is a national radio talk show host heard in 20 cities around America. He is founder and director of the Guardian Angels.
RON AND ROBIN GRIFFIN
Ron and Robin are the Gold Star Parents of Army Specialist Kyle Andrew Griffin, 20, Bronze Star recipient killed in Iraq on May 20, 2003.
JAMES HANSON
Jim served as in US Army Special Forces and is the co-founder of the Warrior Legacy Foundation.
LEE A. IELPI
In March 2004, Lee, along with Jennifer Adams, co-founded the Tribute WTC Visitor Center located across from the World Trade Center site in New York.
DR. M. ZUHDI JASSER
Dr. M. Zuhdi Jasser is the Chairman of the Board, founding member, and President of the American Islamic Forum for Democracy (AIFD). He is one of the moderate, anti-Islamist Muslims featured in the controversial PBS film, Islam v Islamists.
EDITH LUTNICK
Edie Lutnick is a Co-founder, Officer, and the Executive Director of The Cantor Fitzgerald Relief Fund, a 501 (c) 3 charity established September 14, 2001.
STEVE MALZBERG
Steve Malzberg, one of America’s most recognizable faces and voices on the political talk scene, is a talk show host on WOR Radio in New York City and on the WOR Radio Network.
ANDREW C. McCARTHY
Andrew C. McCarthy is a former federal prosecutor and a Contributing Editor with National Review Online.
LAUREN MANNING
Lauren Manning is a former Managing Director and Partner at Cantor Fitzgerald. On September 11, 2001, Lauren was catastrophically injured in the attacks on the World Trade Center.
GREG MANNING
Greg was most recently Partner at Cantor Fitzgerald. He is the author of the New York Times bestseller, LOVE, GREG & LAUREN: A Powerful True Story of Courage, Hope, and Survival.
TERESA MULLAN
Teresa Mullan is the mother of FDNY Firefighter Michael Dermott Mullan, 34, Ladder 12 in Chelsea, who responded to the World Trade Center and perished on September 11, 2001.
PETER REGAN
Peter Regan is an active FDNY firefighter, and U.S. Marine who served two tours in Iraq and is a 9/11 family member. He lost his dad, Firefighter Donald Regan, FDNY Rescue Co. 3.
DANIEL RODRIGUEZ
Daniel Rodriguez is an operatic tenor from New York City. In the aftermath of September 11, he received widespread attention with his rendition of “God Bless America.”

This is going to be HUGE.

On November 24, 2009 a press conference was held by the 911 Never Forget Coalition to protest the NYC based Terror Trial of the 911 conspirators. They also announced a rally to be held on December 5, 2009 in Foley Square (NYC).The rallying call " Attorney General Holder, "We will fight you all the way!"


Debra Burlingame of 911 Families for a Safe and Strong America began the Press Conference. 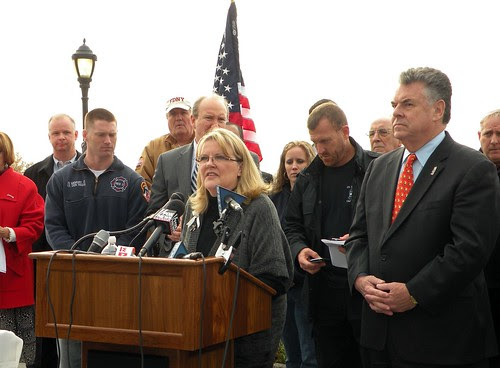 Andrew McCarthy of the Center for Law and Counter Terrorism: 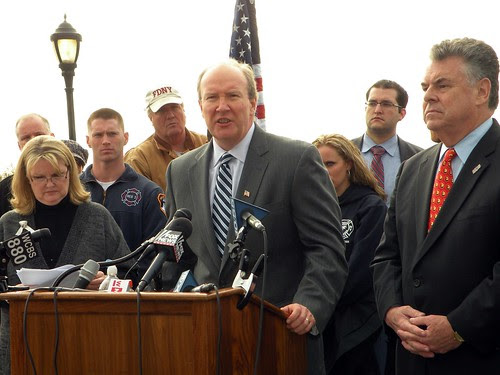 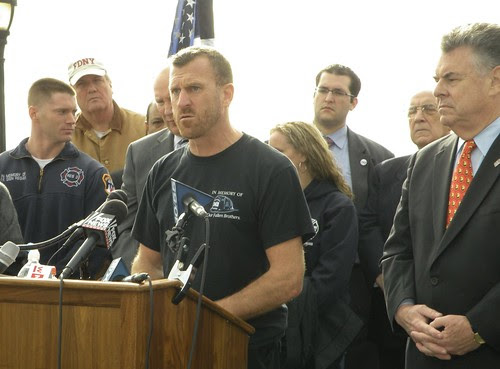 Firefighter, Peter Regan, is an active FDNY firefighter, a US Marine, whose father, Donald Regan (FDNY Rescue 3), was murdered by the terrorists on 9/11 . 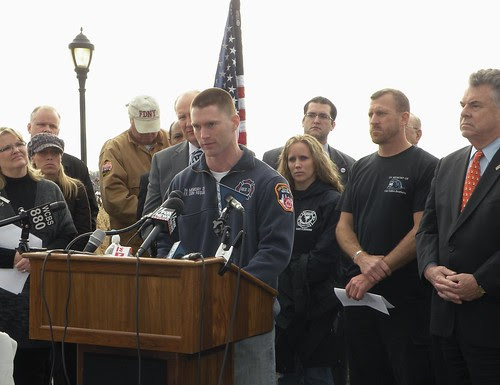 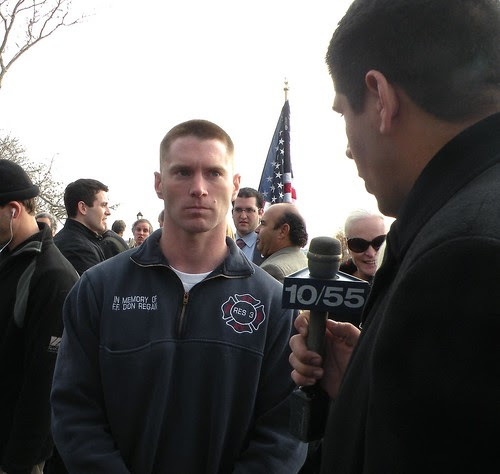 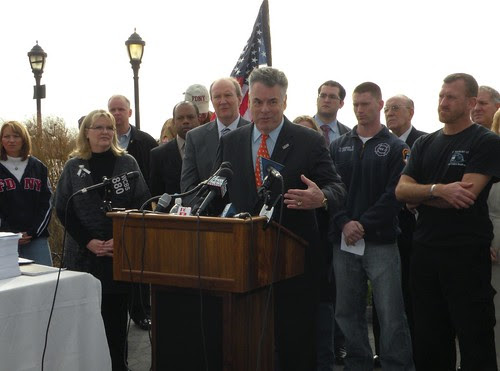 And the fabulous Atlas Shrugs (Pamela G) was there as well... 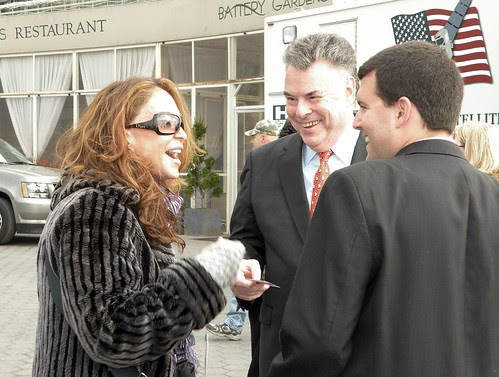 Below is the slide show of the pictures followed by the video:


The video sound might be low in spots, due to out-door acoustics, but it should be fine when you adjust volume on your speakers. This is the complete press conference (30 minutes).Also posted in segments at You Tube (scroll down)

December 5, 2009 in Foley Square at High Noon is the rally against the NYC Terror Trial. 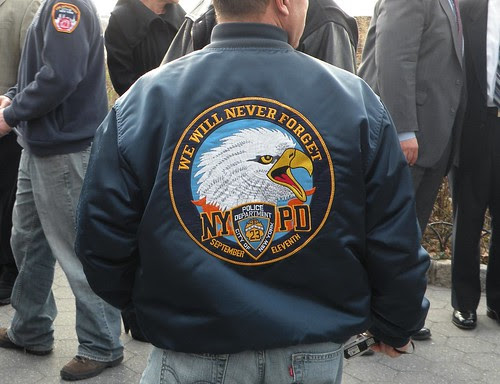 Go to their site at www.911neverforget.us for more information.

The videos below are posted in five parts at you tube:

Citizens came out to Columbus Circle in Manhattan to say No to Obama-Care one more time before Harry Reid sneaks it to a vote on a Saturday night. 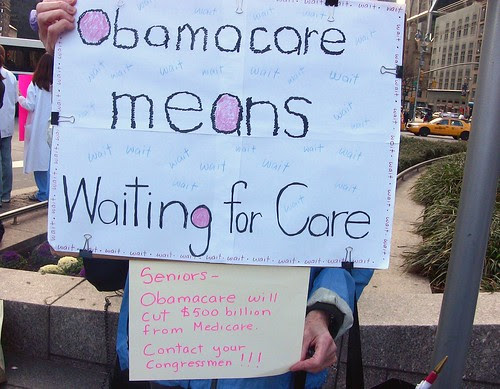 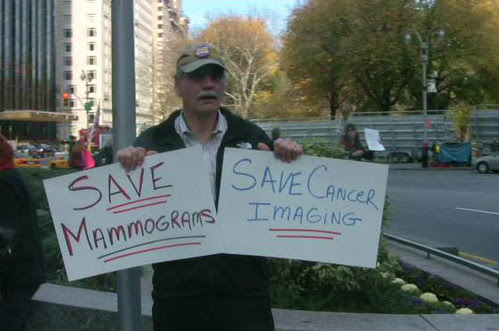 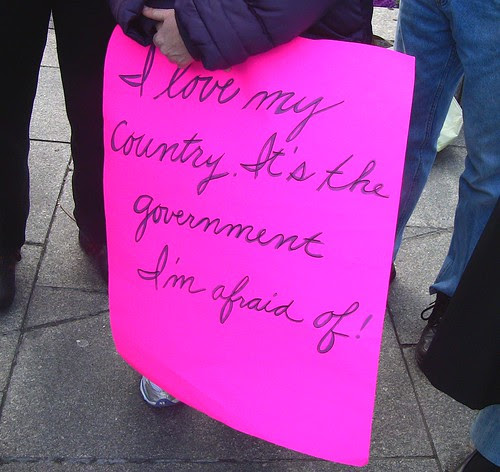 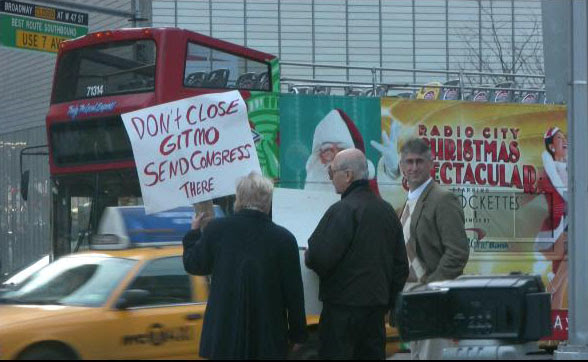 Make sure your Senators know we are mad as hell and NOT going to take it anymore! Posted the short video at You Tube also:

The world according to Pelosi/Reid/Obama is a dead-end; doomed by the "Hopey-Changey" gang. Can we stop them? Or is it too late.... ?

Posted by Red Squirrel (Pamela Hall) at 11:53 PM No comments: 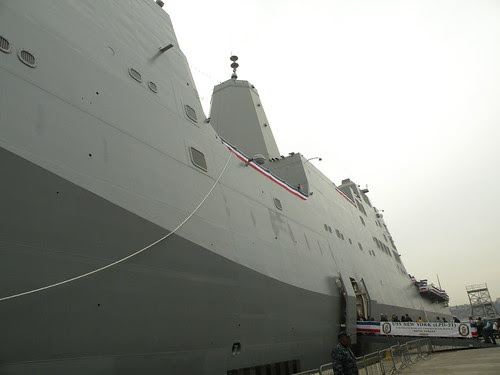 We took the public tour of our new assault ship, the USS New York, the day before Veteran's Day (November 10, 2009). 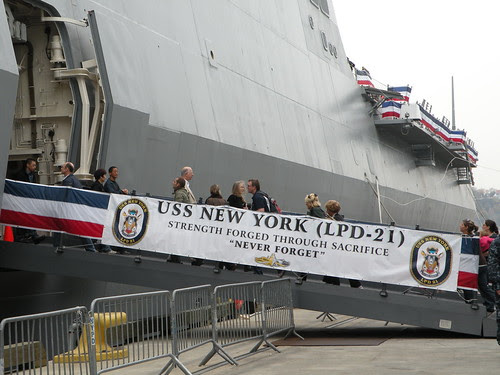 It also just happened to be the birthday of our US Marines (November 10, 1775). It was a great two-hours well-spent. Every one on-board: crew (enlisted and officers) old and young...veterans, women, children .... each and everyone was so happy! 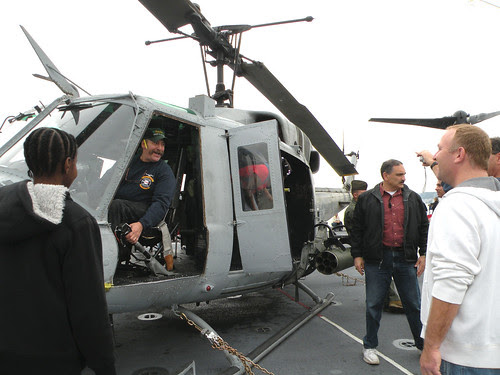 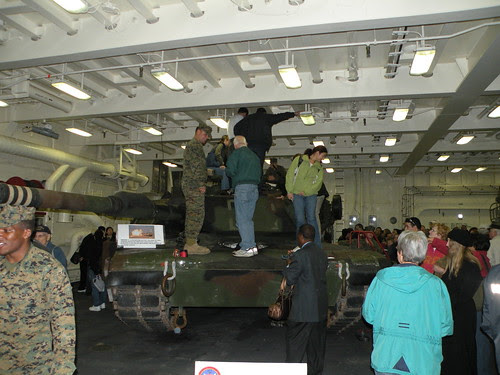 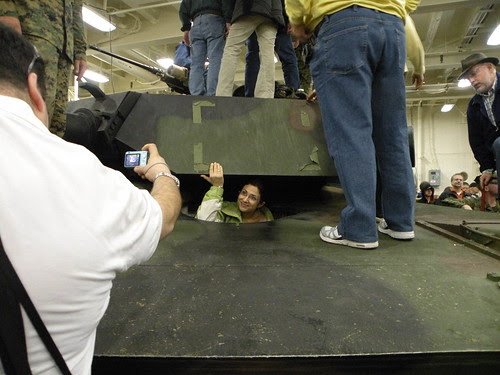 A friend remarked it was like Disneyland for grown-ups: No kidding. It was difficult to capture a shot of all the activity without a few blurs as everyone was eagerly moving from spot to spot. Even so, it was fun catching people sitting in cockpits, climbing on tanks, holding large shells and huge heavy weapons (this was particularly popular) . 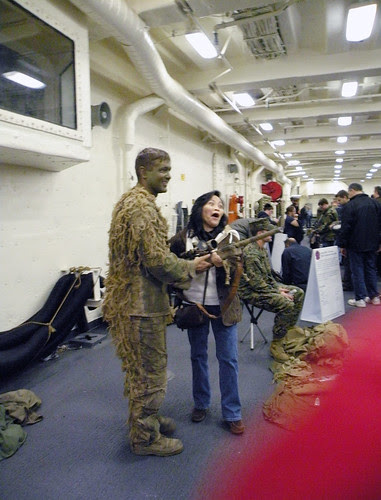 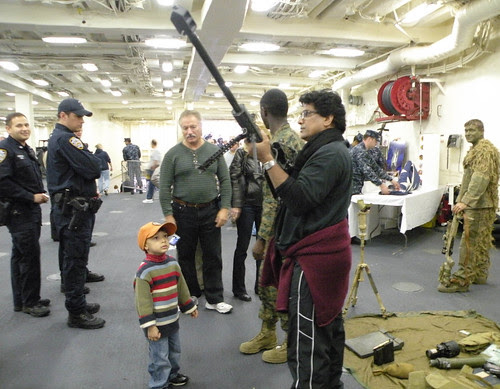 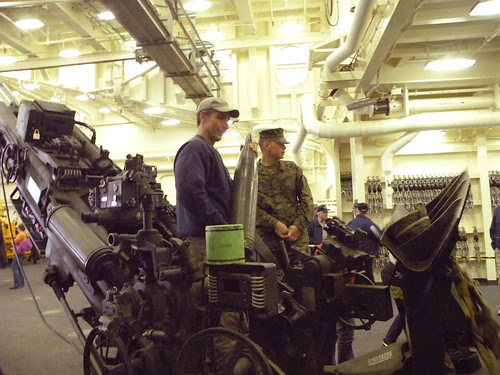 And there was a very meaningful display in memory of those murdered on 9/11. 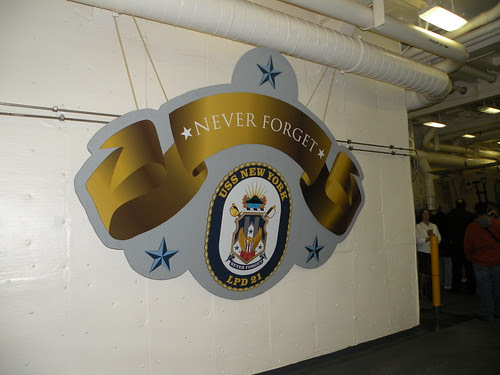 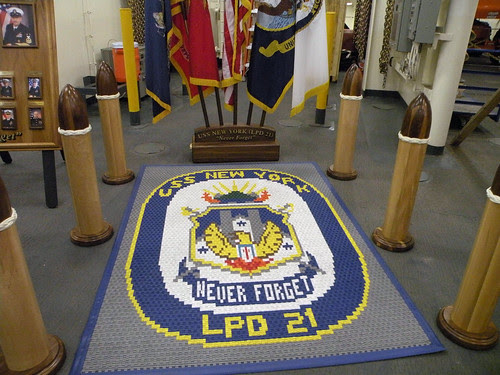 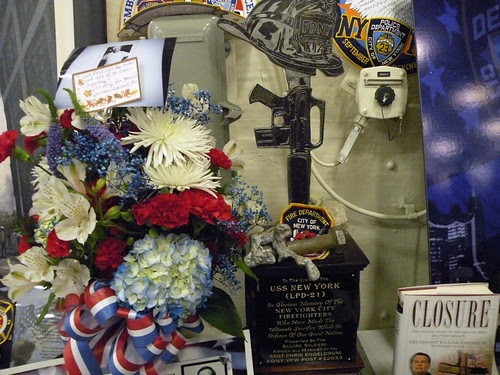 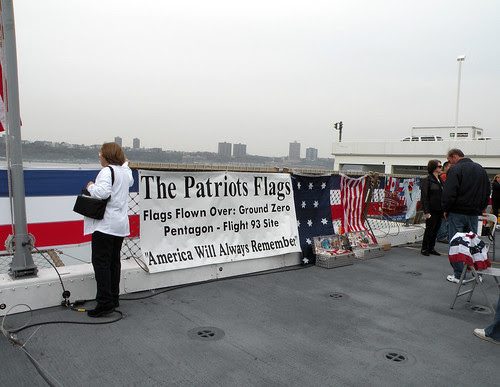 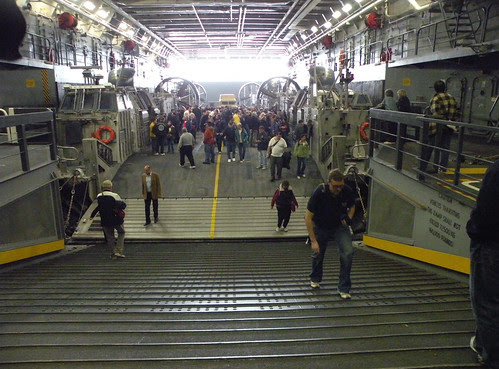 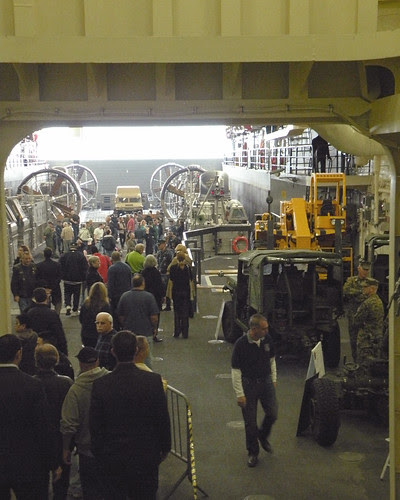 We hope for those who weren't able to come on-board to take the tour, that you'll feel as though you were there after going through the three slide-shows. (you can skip slideshow at go straight to flickr if you prefer) Enjoy!

And some video of a few moments in the public tour of our new assault ship.

Extra exterior pictures of the USS New York (she looked so fabulous) and a few pics of the bikes that a bunch of firefighters (it seems by the logo on jackets) rode to the pier. These were taken on Sunday, November 8, before we came back to take the tour on Tuesday:

Posted by Red Squirrel (Pamela Hall) at 11:02 PM No comments:

Ads for Islam is the way on Manhattan Pedicabs...

Ever since we first caught this on the streets of mid-town Manhattan (and had only a cellphone to grab a quick-pic before it rode up 8th Avenue)....

We've been wondering: WHY did that sign seem to disappear? Was there a complaint?

No idea....but...some pedicabs were posting regular ads on the back(some of them)and then this made an appearance the other day(is it an "ad"?)

Innocent? No Big Deal? Would you want to ride around in a pedicab with this advertisement on the back??

Think we could have one with a Crucifix and one with a Star of David? Fairness in advertising maybe? Yeah...right...

Posted by Red Squirrel (Pamela Hall) at 10:22 PM No comments:

November 2, 2009. The USS New York, an amphibious assault ship built with steel from the World Trade Center, was to herald its arrival at the site of the 2001 terrorist attack with a 21-gun salute as she paused across from the WTC and headed up river to Pier 88. Not so sure we heard 21...maybe only 3....but it was still a meaningful and impressive morning.


(At Daily Motion is the 11:46 sec version, Be sure to watch in HQ when you click menu on video screen)

A few pictures are posted taken from still frames in video.

A few pictures of the crowd as it was breaking up: