The Best of : Sharif “I am a resource” el-Gamal (video)

Some clips from recent appearances of Sharif el-Gamal, the intended owner of the Ground Zero mosque (once someone in Saudi Arabia coughs up the rest of the money)

Thanks to Ravi in the comments section for the next tid-bit, The billion dollar face behind NY mosque (and , of course, are any of us SURPRISED?)

Saudi Arabia's Al-Waleed bin Talal is back in the spotlight for allegedly being one of the financers of the mosque near 9/11 Ground Zero in downtown Manhattan.

One of the richest men in the world, Prince Al-Waleed bin Talal bin Abdulaziz al-Saud has recently been named as being one of the financers behind the planned Islamic center in downtown Manhattan by Fox News -- which is owned by a company in which, ironically, he is also a major stakeholder, reports Foreign Policy magazine.

It is believed that bin Talal has pumped more than $300,000 into the project headed by New York imam Feisal Abdul Rauf as part of the prince's campaign to 'improve the image of Islam among the American public.'

It is to be noted that in October 2001, following the World Trade Center attacks, New York mayor Rudy Giuliani turned down a $10 million donation from Al-Waleed for disaster relief after the prince suggested the United States 'must address some of the issues that led to such a criminal attack,' and 're-examine its policies in the Middle East.'

However, Giuliani interpreted his statements as drawing 'a moral equivalency between liberal democracies like the United States, like Israel, and terrorist states and those who condone terrorism.'

Posted by Red Squirrel (Pamela Hall) at 4:24 AM No comments:

WHEN: August 25, 2010 at 11 AM
It was a NEW 'coalition' of every Leftist, Progressive, Soc/commie/Dem who work together constantly to subvert America. So what's with the NEW name? Old friends who are "New York Neighbors for American Values". They claim that they embrace the American constitutional values of religious freedom, diversity and equality. (as in SHARIA?) And that they ".... stand together today to reject the crude stereotypes meant to frighten and divide us."
A predictable press conference where (surprise-surprise) they came out in support of Imam Rauf and (in his own words).... his "ICONIC Ground Zero Mosque".
The sycophant press came out in droves to this last-minute press conference. It was a scramble for everyone to get there but they did and their eagerness for "the story" was palpable.

After all, this coalition would deliver what was considered a most important message about 'what has happened in America". And I don't mean the attack on 9-11. NOPE. It's that terrorists and Islam, there is no connection, one to the other. In truth, they never met a terrorist who wasn't a victim of America . That's right, put the blame on the Right-Wing, Hate-Mongers , and they did just that.

Looking around at the crowd of supporters, there were many familiar faces. Some well-known (as in Debbie Almontaser of NYC Intifada fame) 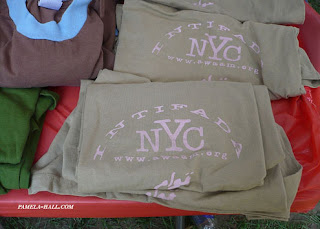 And others such as Bill Doar (Doares) a professional commie agitator

He can be seen assaulting me and a NY Post photographer while the NYC Muslim police just watch. ( watch video here)

This is Bill Doares' "resume"

Workers World Party (also writes for the paper),
NYC Labor Against War (NYCLAW)
Al-Awda NY
International Action Center
If we are known by the company we keep then the Imam has some seriously flawed and highly suspicious characters on his team.


WHEN will our dear Mayor Bloomberg start to ask the hard questions of the Cordoba Initiative. The lack of transparency, the obfuscation , the cover-up goes all the way to the White House, but you'd never know any of that from the fawning press and our Dhimmi Mayor.
BTW, when Faiza Ali , of NY-CAIR,

sweetly made a passing reference to a taxi driver knifed because he was Muslim, she did NOT mention that he was employed by "Intersections" and the Rev Chase who is seen towering in the background.

Nope. Not necessary. All she did was drop " Right wing, Islamophobia ". Forget the facts, that the attacker was one of their own! [NY Daily News: In an odd twist, (Michael) Enright was a volunteer for Intersections International, a Manhattan-based group that promotes peace among different religions. A spokesman confirmed he was filming for the group, which recently threw its support behind the controversial Park 51 mosque project near Ground Zero.] Nope. that unfortunate connection....so NOT necessary to their meme-of-the-day.
Intersections and the Rev Robert Chase were covered as part of a screening for "What A Billion Muslims Think".

A quote from Susan Lerner of Common Cause, one of the organizers of this "NEW" coalition: of
" I am sure many of you are as angry as I am at the furor going on around the Cordoba House, the Islamic cultural and community center proposed for lower Manhattan. Well, under the leadership of Common Cause, many civic, progressive, labor, community and religious groups are getting together to take a stand." Their mantra, *Fighting for Social, Racial, Economic and Environmental Justice***

The representatives of over 40 groups expressed support for allowing a Muslim cultural center to be built near ground zero during a news conference in Lower Manhattan August 25, 2010 to introduce 'religious freedom' coalition, The Coalition of NY Neighbors for American Values.Groups to Announce Coalition in Support of Park51, Religious Freedom

End of Press Conference, as I turned to enter the subway:

and then as I was exiting the subway. ..It may difficult to tell, lacking EYES, but she was walking TOWARDS me.... 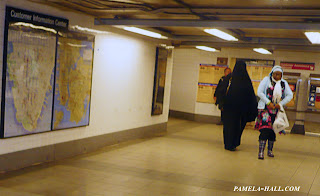 Posted by Red Squirrel (Pamela Hall) at 4:12 PM No comments:

And his speech to those in attendance (and to the suckered press) continues to shows how little respect he has for the articulate and NON-RACIST protests of his constituents. No matter how they arguments are parsed, in Bloomberg-Town, if you don't march to his drummer, you are UN-American. Period.

Bloombergs opening remarks, " We call this ‘The People’s House’ because it belongs to all 8.4 million New Yorkers who call this city home. People of every race and religion, every background and belief. We celebrate that diversity here in this house with gatherings like this.

And for me, whether it’s marking St. Patrick’s Day or Harlem Week or any other occasion, these gatherings are always a powerful reminder of what makes our city so strong and our country so great.

Bloomberg continued to exhibit how solidly he has been bought when he said , "Islam did not attack the World Trade Center — Al-Qaeda did. To implicate all of Islam for the actions of a few who twisted a great religion is unfair and un-American. Today we are not at war with Islam — we are at war with Al-Qaeda and other extremists who hate freedom."

and Sharif "He touches my heart" El-Gamal.

(The Imam is still out of the country fund-raising for the mosque on OUR TAX DOLLAR. So no weepy thank yous from him this evening) NY 1 has short video here

OUT side the dinner, the press actually decided to do some interviews with the protestors.

The impromptu protest was small because the information about the Iftar dinner was sent out with only about 90minutes notice, but the press did take the time to approach them with a few questions, even though they can't bear to alter their pre-ordained observations.

They remained stuck-on-stupid with , " How far is far enough to build this mosque/community center" and "Why are you blaming all Muslims for 9-11."

A slide show of the protest and the press :

With Bloomberg so firmly in the pocket of the Saudis (for surely that will be exposed )we can expect more of this insanity from our Mayor until we VOTE HIM OUT OF OFFICE.

Otherwise, Bloomberg is going to get us all murdered...

JOIN US when we do a shout-out to Mayor Bloomberg and company. 9-11 at 3 PM

Posted by Red Squirrel (Pamela Hall) at 1:33 AM No comments:


VIDEO as the bikes exited the Holland Tunnel:


August 21, 2010. The Holland Tunnel, NYC. Americas 911 Foundation Memorial Ride. Bikers (700-800) rode from Shanksville, Pennsylvania to the Pentagon and the came roaring into NYC .

In the morning they will form a memorial line on the north end of Ground Zero.

The America's 9/11 Ride is about remembering the Heroes, Volunteers and Victims who lost their lives on September 11, 2001 and since.

It was an amazing and thrilling and deeply moving experience to welcome them as they exited the Holland Tunnel.

The bikes formed a caravan uptown (with police escort) to 54th Street and 7th Avenue.

And then they had a great 'block party' at 54th street.

More pictures will be posted of the bikes, particularly the police bikes which had the State ID on them. Lots of pics were taken of the 700-800 bikes parked at that location. That will be posted next.

For more info on their ride, go to http://americas911ride.org/

Posted by Red Squirrel (Pamela Hall) at 12:01 AM No comments:

the NYC MTA had no problem with these ads. “So, what’s up, Bloomy?”

In July of 2008, this ad was found on the New York Subway (paid advertising)

So, Mayor Bloomberg, why have you refused to post this paid AD on the NY city busses:

..
And while we’re asking about bus-ads, has ANYBODY seen these ads on a NYC taxi-cab? Any one??
.
SIOA PAID for these ads, “Leave Islam Safely” that are supposed to be on the NYC taxis, FIFTY of them. So why aren’t they showing up anywhere in town??
..

..
What we found were these blank ad cards on 7 taxis and wondered, “Why those ad cards blank?” Co-incidence? Maybe. OR…Maybe not. Is anyone else wondering.?
..

..
Perhaps in the “Land of Dhimmi-gogue Bloomberg and Company”, some people are more EQUAL than others.
..
You should be ashamed of yourself, Mayor Bloomberg!
Posted by Red Squirrel (Pamela Hall) at 11:59 PM 1 comment: