Americans are SILENT NO MORE!!

Reliable sources estimate the crowd at 15,000 or more . The bodies were PACKED from SOUTH of City Hall Park to Chambers (NORTH). Both sides of the avenue and thick from park fence into the street...do the math!! Thousands. America! What a Country!!

To see more pictures in the speakers album go here:

THEN when NEWT arrived, the very pleased and VERY enthusiastic crowd swarmed in from the street :

AND...one very special fan of Newt's...she was so HAPPY!!

VIDEO will be posted later.

Is this oddly shaped garden facing mecca? Just might be. Since the Brigade happened to noticed one individual in mid-town... prayer rug on the sidewalk...facing North ...just like this little garden plot seems to be.... 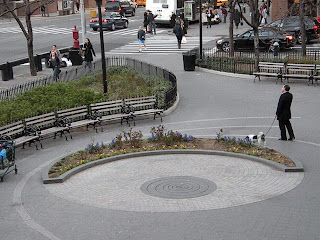 Any thoughts on this one. Anyone? 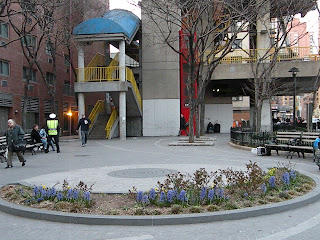 Also, found this info:Why would a mosque in New York City face toward the northeast when "everyone knows" that Mecca is south and east of New York? 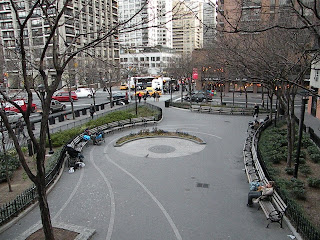 The Marines from the Headquarters and Service Company and the Weapons Company of the 2nd Battalion, 25th Marine Regiment spent 3 months training in California and then 7 months in Iraq involved in counter-insurgency missions in Anbar province.

At least 17 of these reserve troops are also law enforcement officers in civilian life on Long Island. There were about 20 ladder trucks that lined the avenue. It was a beautiful sight.

Around 2,000 well-wishers waved banners and chanted "Thank you" as bright yellow buses carrying the troops - escorted the final 100 yards by kilted bagpipers - arrived at the military facility on Stewart Avenue in Garden City, Long Island shortly before 7 p.m. on Friday, April 10, 2009

There was a quiet anticipation as everyone set-up and waited for the arrival of the troops. THEN...great excitement!! as the buses arrived BUT... then there was a bit more waiting for family and friends as they waited for their soldiers to de-bus and get their gear. Finally they greeted and hugged with more joyous cheers.

Many signs were held up for the soldiers and families to find each other in the crowd and then ...the peaceful, quiet as everyone headed home.

by redsquirrel08
Posted by Red Squirrel (Pamela Hall) at 6:46 PM No comments:

Here today,gone tomorrow? Too soon for some (maybe) but,we can HOPE cause with all that change, change, change:"Now you see it...and SOON you won't!"

Too soon
Uploaded by vigilantsquirrel
Posted by Red Squirrel (Pamela Hall) at 9:28 PM No comments:

Let them live in peace!

It's time for all who value freedom to Stand With Israel.

Posted by Red Squirrel (Pamela Hall) at 11:46 PM No comments:

The Citizen's Freedom Day Tax Revolt Tea-Toss. April 3, 2009 in Northport, Long Island. A heavy rain didn't keep more than 300 patriots away. (of course the symbolic Tea Crates were recovered later on to be used for MORE Freedom Day Tax Tea Parties)We will not be Silent! The People Say NO MORE!

Lights Out on Broadway...Junk Science and the Arts...

March 30, 2009 - The Junk Science Chicken Littles dimmed the lights on Broadway...like good little O-bots. That meant all the little kiddies had to hunt their way to the theatres ...all partially lit. Madame Tussauds was creative, she just dimmed a few letters in her name. Of course, there were so many lights EVERYWHERE that it all seemed as foolish as it was. (Sort of like bovine flatulence.) Lots to amuse as the lemmings marched in lock-step. So... What's next...Shadow plays? With global warming...and lots and lots of sunlight.... who needs electricity!


Posted by Red Squirrel (Pamela Hall) at 7:40 PM No comments:

They bought the dream, they drank the kool-aid: the "Obots" got their man.
Can they see through a glass darkly...Will they?...Ever?

Posted by Red Squirrel (Pamela Hall) at 1:18 AM No comments: