An 8 hour Symposium hosted by  NY Law School Law  School Review on "Sharia in America:Principle and Prospects"; to examine the place of Islamic Law in The United States. 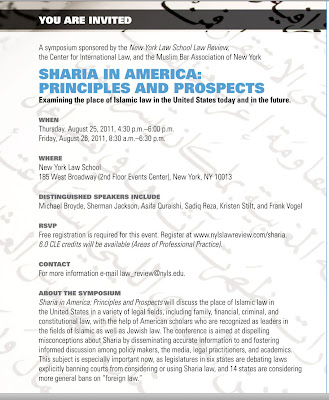 As we approach the 10th Anniversary of 9-11, this symposium was primarily a two-day commercial for Islam. Take Heed. 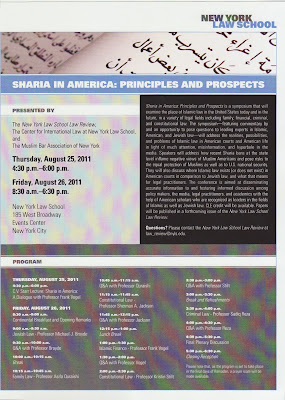 A few minutes late, I picked up the opening remarks of Professor Sadiq Reza, of New York Law School.

1. Sharia is God's Law. A Religious Government Law for a majority of Muslims overseas.
2. Vogel has trolled the Internet looking for the alleged Calls-for-Sharia in U.S.
Claims he can't find anyone doing this.
3. Sharia is no different from other Religious Law (even Sectarian jurisprudence)
4. Exaggerated fears of it coming to U.S. Ludicrous to be concerned.
5. His purpose is not to apologize nor advocate. Just "telling it like it is"


NEXT post  is Part 2  of Day 2 with Professor Frank Vogel of Harvard Law School spoke again (briefly) on the History of Islam/Sharia (with slides) AND please, follow link below to a fabulous article on the symposium written by Alyssa Lappen "Sharia Lobby Shifts into Fifth Gear"
...
Posted by Red Squirrel (Pamela Hall) at 5:30 PM