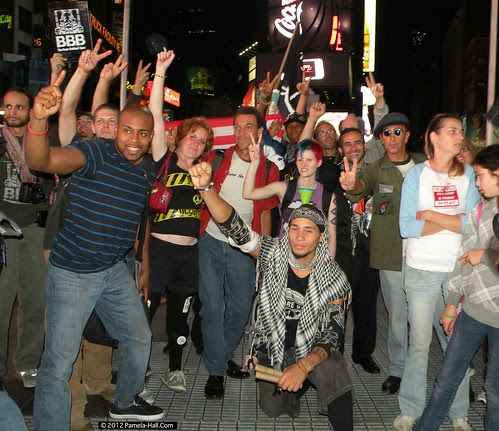 “Occupy the Big Screen at Times Square” was hardly an “occupation”. Leading up to the “Big Day” on the 17th, this small rag-tag group of the disaffected headed to Times Square ready to spread more “Peace” and “Love” while smirking and spewing hatred for America. 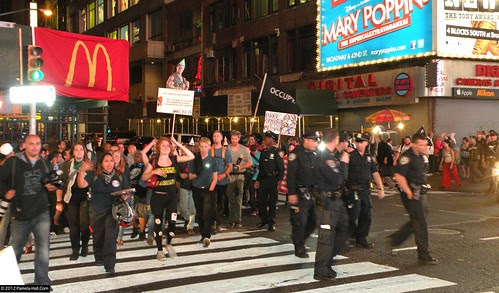 On the OWS site, this was described as a “March from Occupy Trinity on Wall Street “down” (down??) Broadway to Times Square….leave at 10pm. At midnight on September 16th, as it becomes September 17th….take over the big screen with our birthday party!” (take over? hardly). 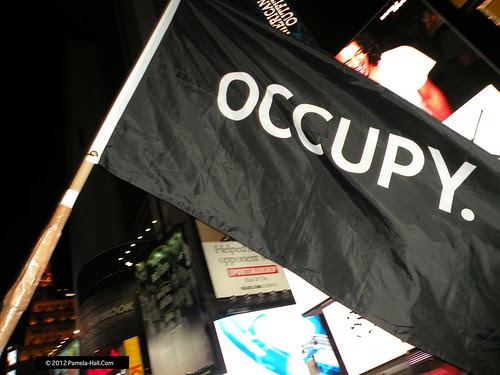 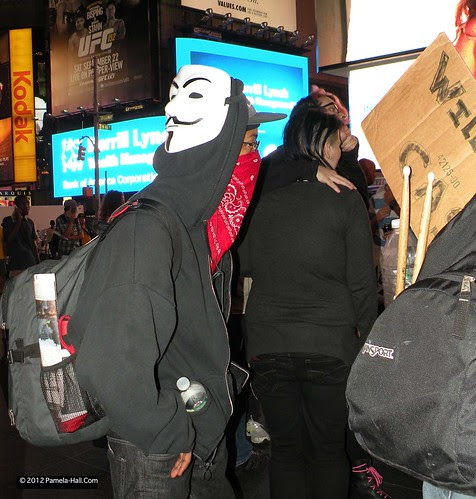 Except some of  the Fake “Legal”Green-Hats: 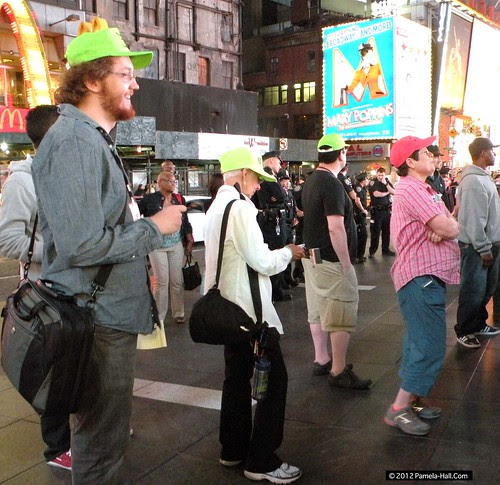 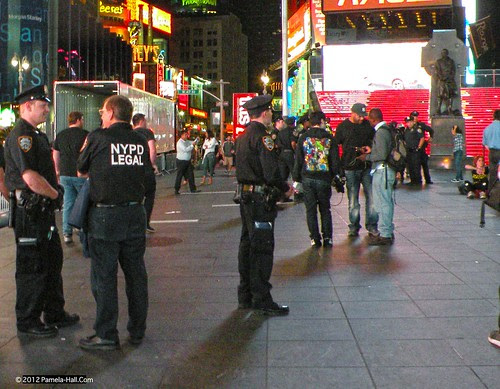 I had already decided to avoid Wall St. next morning  (7 AM-too early). These jerks will try to take over the streets with sit-downs and the city will be hit with a large over-time bill from the NYPD. 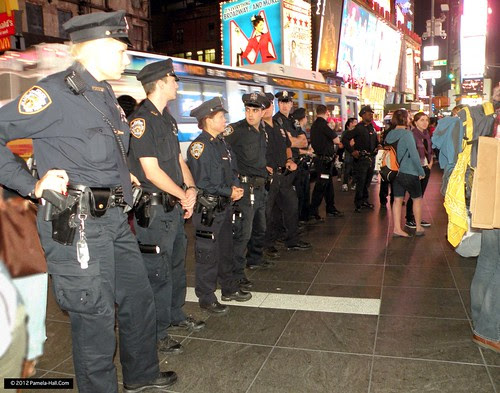 Annoying. Tedious. Costly. A waste of time and resources while they world is going up in flames. 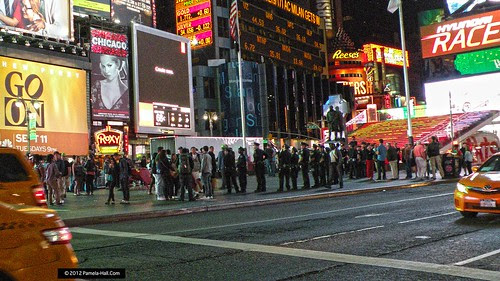 There will be  arrests (they plan on it) amidst cries of police brutality. But, that will be Monday morning. Sept. 17. Been there.Gonna pass on Monday. 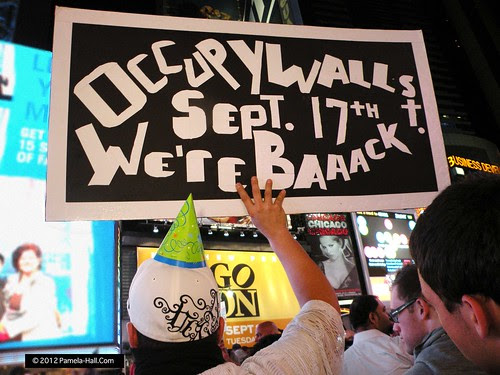 But did not pass on Sunday early AM and some special time with”the children”. 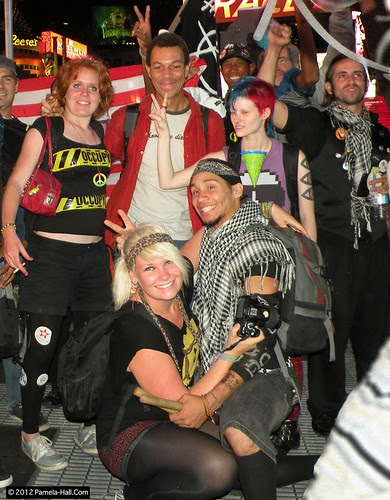 There was only a small group of anarchists who made the follow-the-leader march, banging drums and chanting, from lower Manhattan to Times Sq. 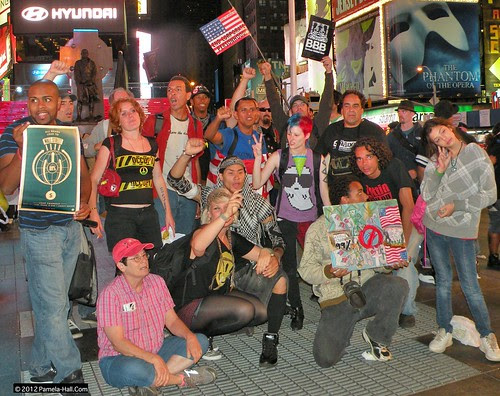 When they ‘took’ Duffy Square, pieces of danish pastries were shared as birthday “cake” 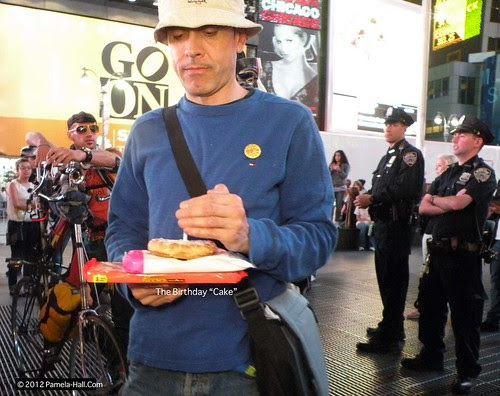 Birthday songs mixed in with the usual anti-American chants and the American flag held up-side (of course). 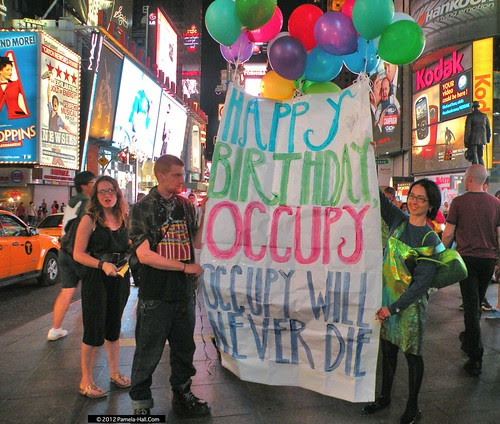 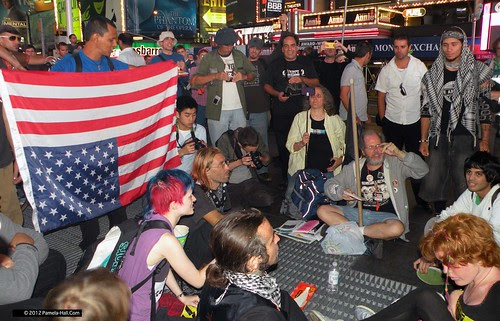 A closer look at the ‘disaffected’ was odoriferous (bathing is still a low priority). 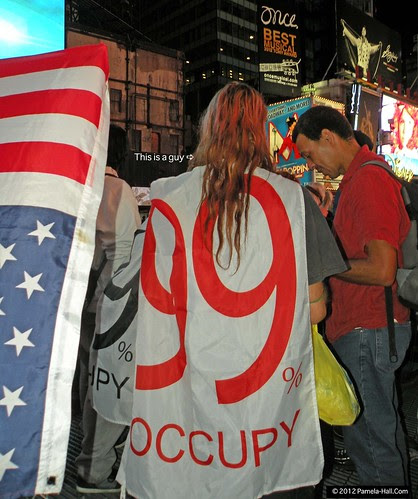 The unwashed assembly shouted to the tourists that they are doing this for us, “the 99%”. How sweet. …. 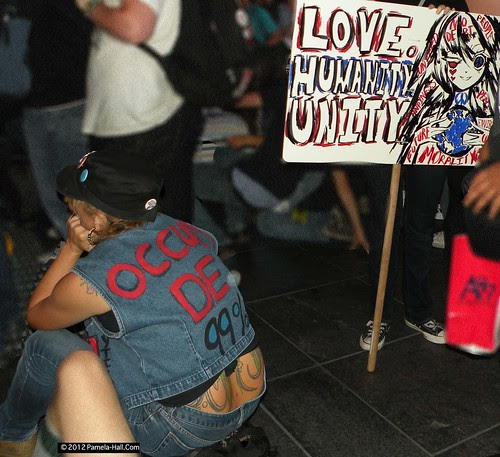 Ever so  briefly this fellow messed up and held the flag correctly :-) 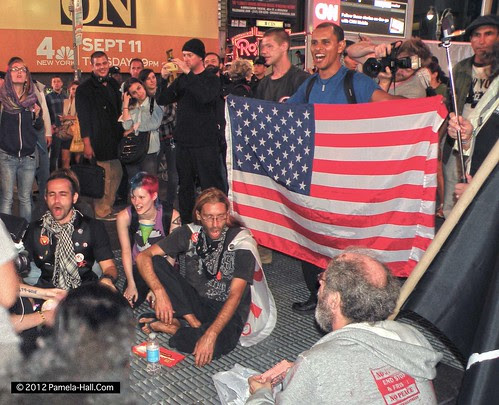 Honor? Good-Will? Respect? Not from these rejects. Most are quite young 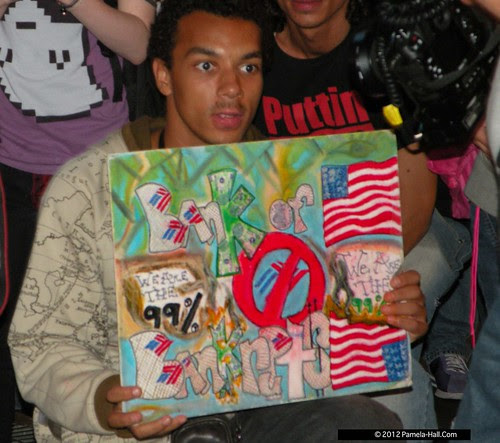 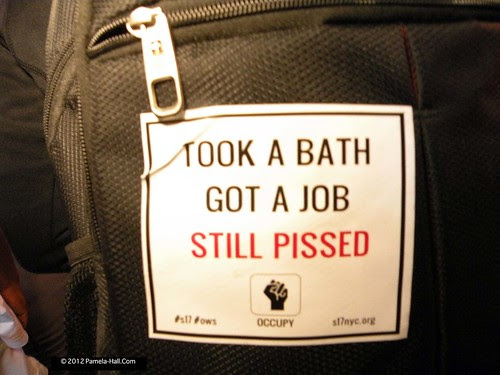 Tools created by the Marxist take-over of our schools, churches and colleges. (this fellow warned all to watch out for friendly strangers…they might be POLICE) 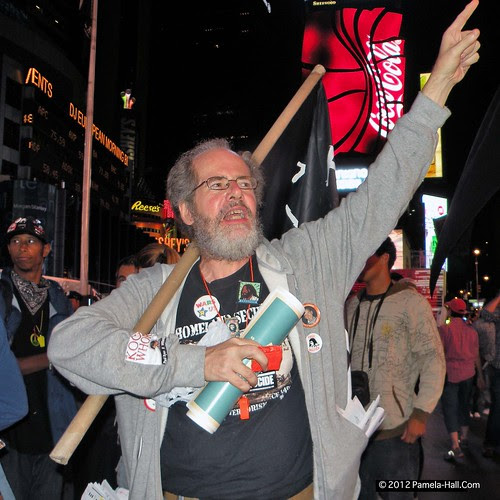 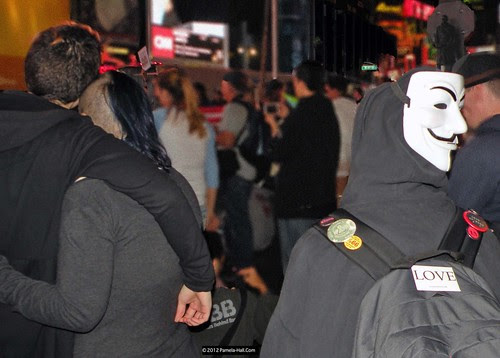 But, the closest this bunch got to an ‘occupation’  of the Big Screen over the Eagles Store was this slide. It went by a couple of times while I was there. You had to catch it fast. 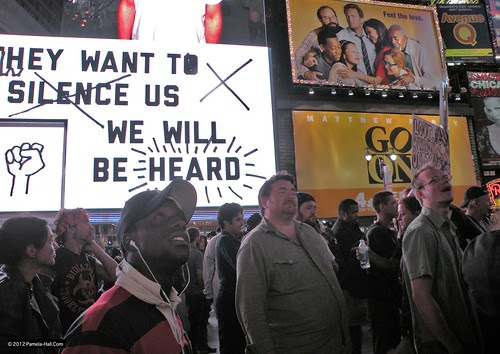 Somebody ‘up there’ loves them. Somebody let them use the Big Screen. Who got the Eagles corporate machine to to side with their ‘enemy’. 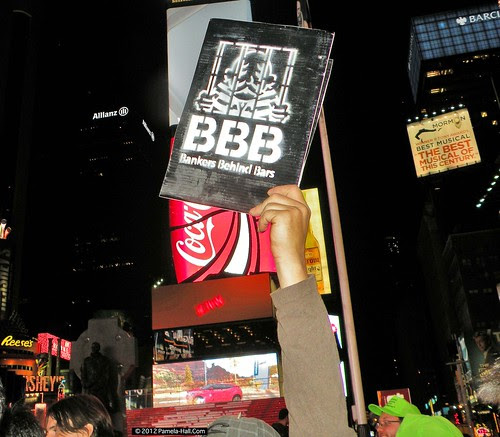 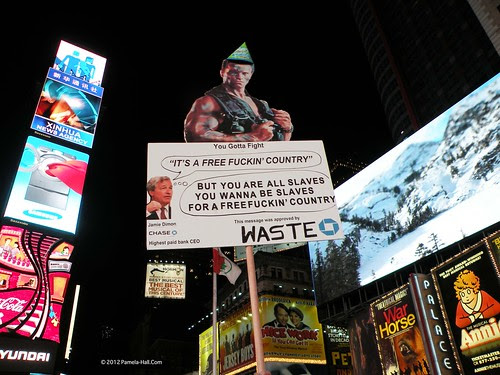 Messages meant to “win” us over to their cause? Often made no sense (to me ) 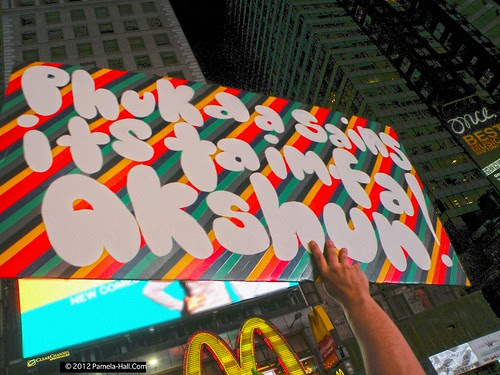 A happy song, brought lots of giggles. “When the Saints go marching in” became ” became "When the stocks go crashing down” ( so cute)


(skipping to the end)


Now you are bored for a Freedom
For a freedom you don’t have.
Slave owner of America


And holding to that “theme”


Millions of people losing contro
Their homes and their assets, all alone
To you predators and your loans
While whole generations are gone
We are eating shit and your left-overs
No 20 oz. sodas, only hangover


(skipping to the end) 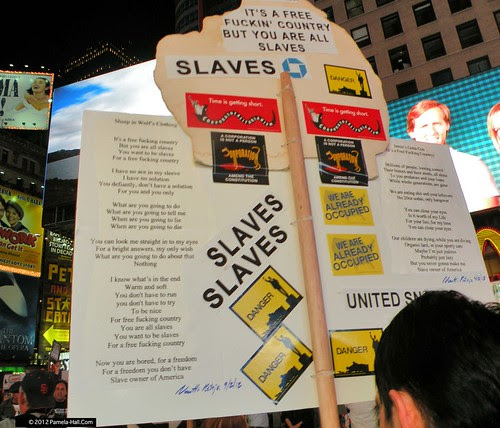 Odes to indoctrination from obedient tools of the Marxist take-over of America. 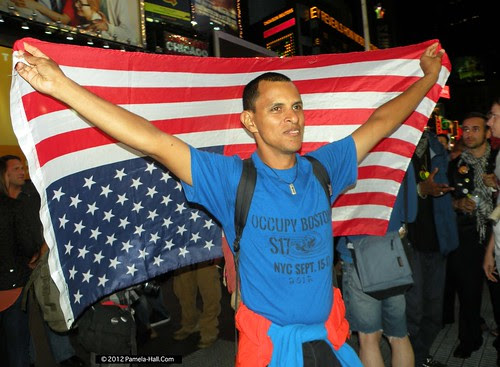 Slideshow of the pictures :