Part 9 of 10 - Aug 26, 2011 - This was an 8 hour (2 day) Symposium at NY Law School Law Review On "Sharia in America:Principle and Prospects". The purpose was to examine the place of Islamic Law in The United States.


On Day 2, Professor Sadiq Reza , is the last speaker of the Symposium. He speaks on Criminal Law (Sharia and Western Law). 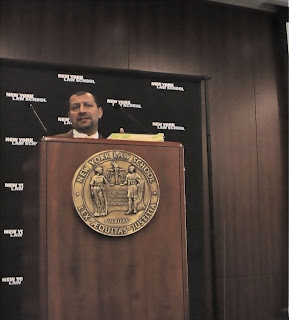 Least favored by moderate Muslims and most understand the fear. Unpleasant doctrines, some are not indigenous to Islam, honor killings and genital mutilations, didn't originate or and are not limited to Islam.

These pre-date Islam, they are not Islam, even though published by some Imams


Fewer than 50% of women live in Muslim world where cuttings and killings happen.

Not-tradition. Not Muslim practice or Doctrine. He is sure there are some Imams and jurists who favor these...re dishonor of community and family, this is not a majority opinion in Islam


Mentions in Western Law, catching wife in adultery, is one of first 5 categories of provocation in a partial defense. In U.S., in 1970s, the courts did not consider spousal rape and spouses were exempt from charge of marital rape until 1993. Today all 50 States ( and D.C.) have laws that forbid forcing sex on anyone


Yes marital rape is in Qur'an. He reads the well-known quote re "woman is like a till" 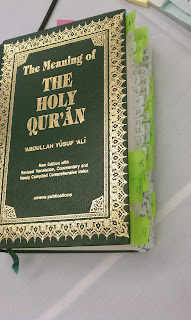 Starts his slides and speaks of three categories of  Islamic Penal Code: Hudud (an eye for an eye), Qisas (retribution) and Ta'zir (chastisement). Represent the Rights of God, the Rights of Person and the Rights of Society. This is the template of Islam; the Crimes and Punishment 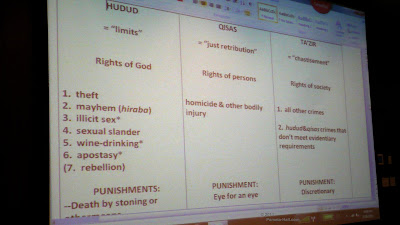 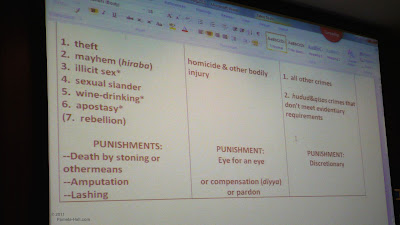 Where is this system practical? Shows map of countries, showing their relationship to Islam.  Mentions that Egypt is not a sharia-centric country. Should not be on the list. 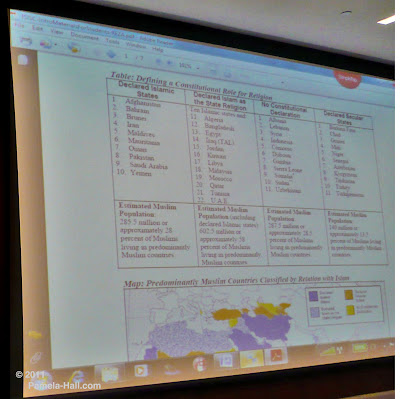 Has nothing to say re U.S. and Sharia. Not seen anyone call for Sharia Criminal Court here.  Muslim-Americans are not asking for stoning and whippings. It is repugnant. Moral sensibilities reject that category of crimes.

Ta'zir would offend our Constitution


Notes from the Q and A

Q The need for 4 witnesses to Act of Adultery. The Sunna. Pakistan, Saudi  Arabia, do not follow the evidentiary rules.


A- mentions the need for 4 witnesses being a deterrent

Q- Bigger threat to Criminal Law and Islam over-use of material support statute by American  Criminal Courts . The ramifications for the Muslim population in the U.S (Peter Beauchamp)


A-Has to with Civil Rights and the Patriot Act (tried for terrorism). Allows for lower standard of proof of criminal intent

Q- The materials she has read imply. "You can't pick and choose. Muslims believe in a package of items.  We do want Family Law ( not Criminal Law) It's just a strategy..."

A-Muslims can pick and choose. If American Muslims are ever in a position to implement any form of Sharia, they will be the measure of what that Sharia is. According to the polls (assuming they are not lying) Muslim Americans have no interest in implementing the Sharia Criminal Law. They have always picked and chosen.   And to be implemented it must be accepted by the people.


Professor Reza spoke for approximately 28 minutes. His Q and A was about 18 minutes. This is the audio of the presentation (with some slides) followed by the Q and A.