UPDATE : Videos are now posted from Screening on Day Two (Feb 12, 2011)of the World premiere. Please scroll down.

VSB was on hand for this two day event that was presented AT, not BY CPAC (The Conservative Political Action Conference) 2011.

It was the World Premiere of the seminal ground-breaking documentary,"The Ground Zero Mosque: Second Wave of the 9/11 Attacks".

Produced by Pamela Geller (Atlas Shrugs)  and Robert Spencer ( Jihad Watch) this was the World Premiere of a powerful documentary. Day One was a riveting panel. Day Two was the the screening.

On Day One, we heard painful testimonies from families whose loved ones were murdered that day by Muslim terrorists. We also heard from NYC Councilman, Dan Halloran (the only member of the City Council willing to speak out against the Ground Zero mosque) And recent candidate for office in South Carolina, Ilario Pantano. He spoke briefly  from the audience.


On Friday, February 11, 2011,  Day 1, the room was packed. This was an event that CPAC did not support and would not have on its printed schedule, so AFDI (American Freedom Defense Initiative) and SIOA (Stop Islamization of America) arranged the room at the Marriott in Washington, DC.

CPAC did manage to list the documentary on the poster for the screening room. (see below) 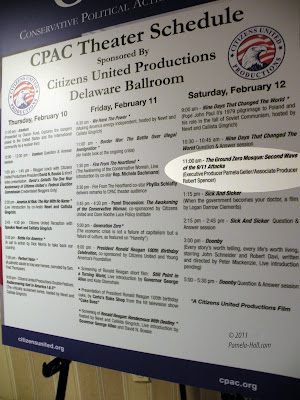 TAKE NOTE: Geller and Spencer have done events at CPAC  three times now;  offering up important panels with speakers and topics that CPAC should embrace, and CPAC, instead, ignores.
See links below for previous events:
(2010 AFDI  Panel is here>> and 2009 Geert Wilders at CPAC s here>>)

(for more coverage and pictures at Atlas Shrugs, go here)
There are 11 videos from Day 1. All are powerful ( including the Q and A) but if you have time for only one, then choose this recap of Sally Regenhard and you will see :

The first video  from Day One is Robert Spencer's opening remarks


Rosaleen Tallon's  brother, Shawn (a firefighter), was murdered on 9/11. She read the coroner's report that her mother had received for the first time in public.

Next is the Q and A with 9/11 Families and Geller and Spencer:

There were questions about Sharia law, the Islamist infiltration of CPAC and the proposed mosque at Park51 (Ground Zero).

At approximately 7:49 you will hear the remarks that Pamela Geller made regarding the infiltration of CPAC that was picked-up by Glenn Beck.

We had younger members in attendance at CPAC who have never seen the truth about who attacked us that day. Of what really happened to those who were murdered that  day.

After the screening 9/11 Family Members, Rosa P. Leonetti and Nelly Braginskaya spoke of their murdered loved ones , reminding us of WHY this film HAD to be made.

This is a film that must be seen. We must never forget.

If you are in the New York area, you can see it NOW.  The New York City Premiere of the Ground Zero Mosque documentary film is on Muhammad's birthday, February 20th, 2011 at 7:30 PM


**You must RSVP to GroundZeroMosque@aol.com.**

There is just a bit more : pictures with  a report on CPAC  to follow, so please check back.