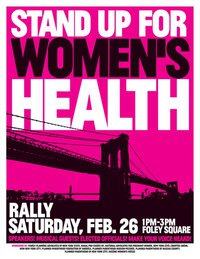 The signs pretty much say it all, and it's not pretty....Rude, Crude and totally lacking in Class...

There is so much more in the video that follows:

Feminazis claim they are fighting for a woman's Right to Choose. But, doesn't choice mean you've heard more than one-side; that a decision was made based on possibly opposing points of view?

That is exactly what they won't permit. The shrieking Feminazis say there 's only one way to Choose, their way or no way. Just have the abortion and get on with your life. That is a devastating 'decision' that some women learn to regret because they never made a choice. Victims, of the Planned Parent Abortion Mill.

Sadly, there were a couple of thousand young women and young men (mostly white and well educated) who gathered together orgasmically to praise Planned Parenthood and to demand that the unwilling taxpayers continue to bankroll their industry, Murder Inc.

And of course ...there were all of those thoughtful and creative signs:

BTW: at about 2:33 caught a joyful counter-protest passing by, carrying a banner of the Holy Mother, and the rabid 'Choicer's worked hard, of course, to cover it up. After all, some women might reconsider...if they really had a CHOICE

And of course there were the stoic labor tools...

and the  blissful Marxist/socialists (who set up their reading tables on the north end of Foley Square.)

Labor, progressives, socialists, Marxists and ' Planned'  Parenthood (like peas in a poisoned pod) hoping to keep the nightmare 'alive' through forced taxation....

These kids...managed to get a bit of everything in one sign:

And even added a song sheet: 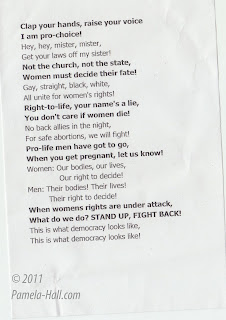 And of course, there is more to come. 'Grow" our movements? Just don't grow any "babies"... aka...the fetus. One speaker reminded the eager young crowd, SOME only care about the fetus, we CARE about the woman....

Our wish at VSB, "Mothers, Please,  don't let your daughters grow up to be Femanazis. " 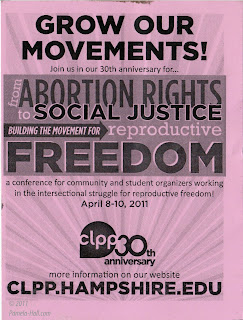 And don't eat meat or wear fur, whatever you do. Only kill your babies...after all...they are a punishment...right?

And slideshow of all the stills: