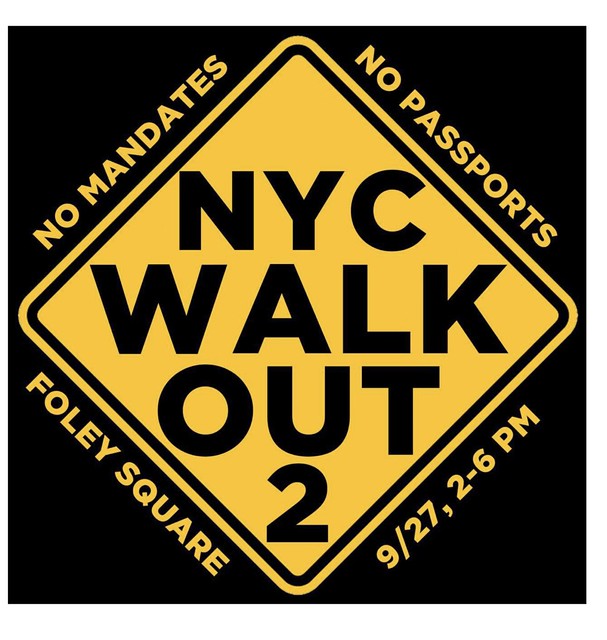 Sept 27, 2021. Walking to Foley Square for the No Passports/Mandate rally, I passed by City Hall where the sidewalk was busy with NY's beleaguered Taxi drivers and their on going protest

"Debt forgiveness now. If you want to see the power of drivers, come out The@nyctaxiproposal won't end the crisis of drivers earning below minimum wage as income is absorbed by high mortgage payments. Thousands will eventually lose our jobs & face liens on bank accounts & our homes. They created the crisis & want to keep us locked in it." 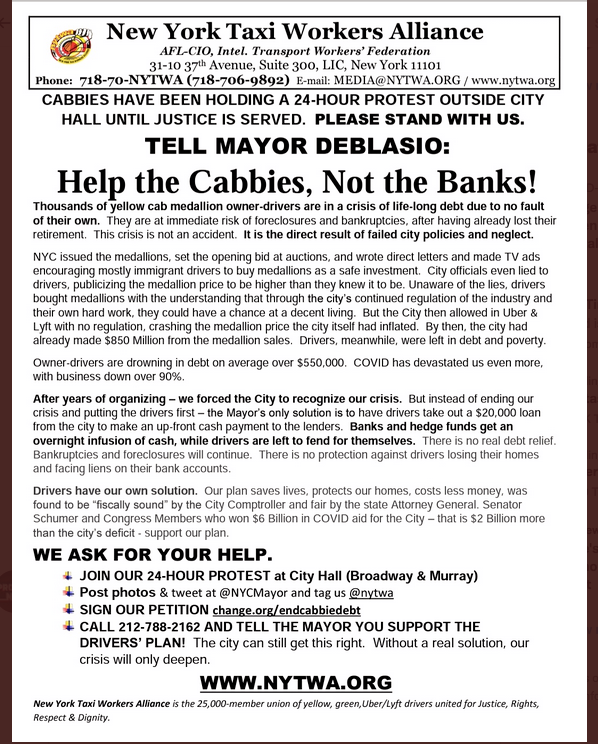 Moving on to Foley, I found a small protest against vaccine passport and mandates. I had expected a much larger crowd.

Jo Rose, co-organizer. Kevin Peters, a co-organizer of the rally,“This is not just about health, it’s about control it’s about surveillance, its about tyranny, and restructuring our entire economy, health system, and education system.” [Epoch Times] 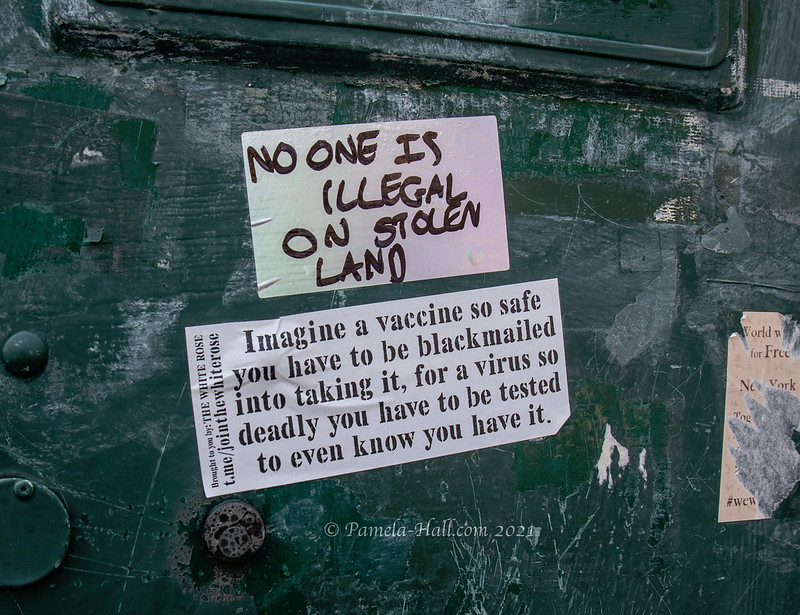 The press was hovering and SVU was lined up to film .... and one protest leader was being very snippy with the press (ABC in particular). I noticed the reporter did manage to find a willing person to answer questions. 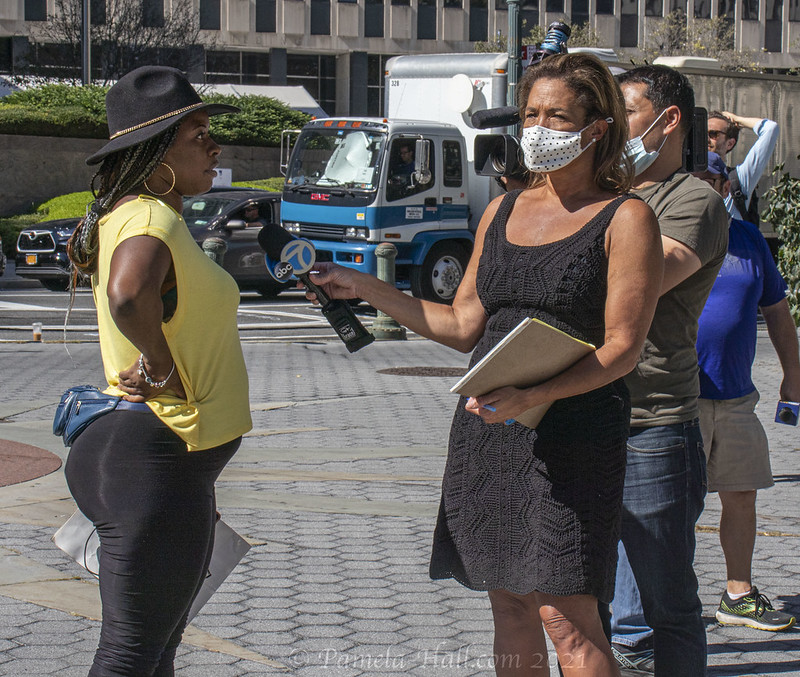 Otherwise everyone seemed to be just hanging and chatting so I left after an uneventful 30 minutes. 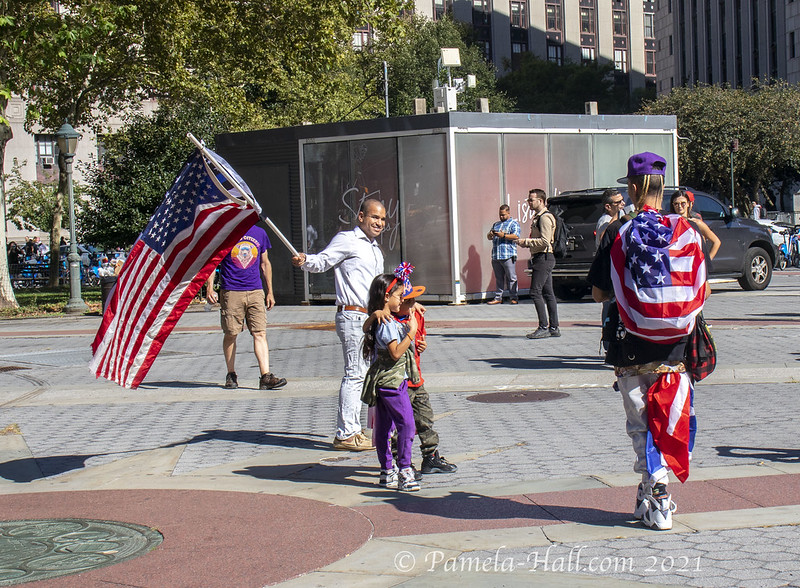 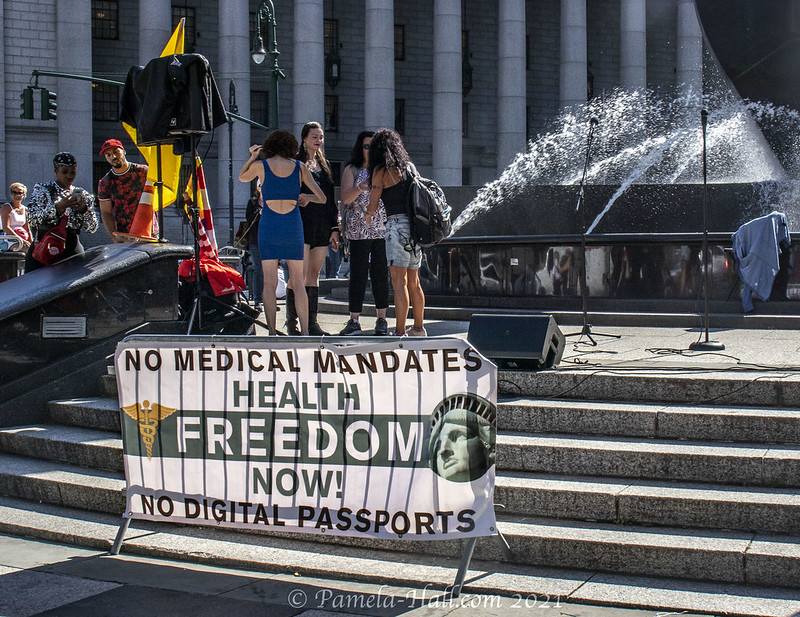 .Flash forward three hours: Who knew (and WHEN did they know it) that the event would grow in to a very large protest. Definitely frustrated to have missed the actual rally at the end and their very strong opinions.

Blk speaker: "I don’t care if the vaccine is approved by the FDA, the CIA, the FBI… if it’s not approved by G-o-d, I don’t want it inside of me”

We will not comply. 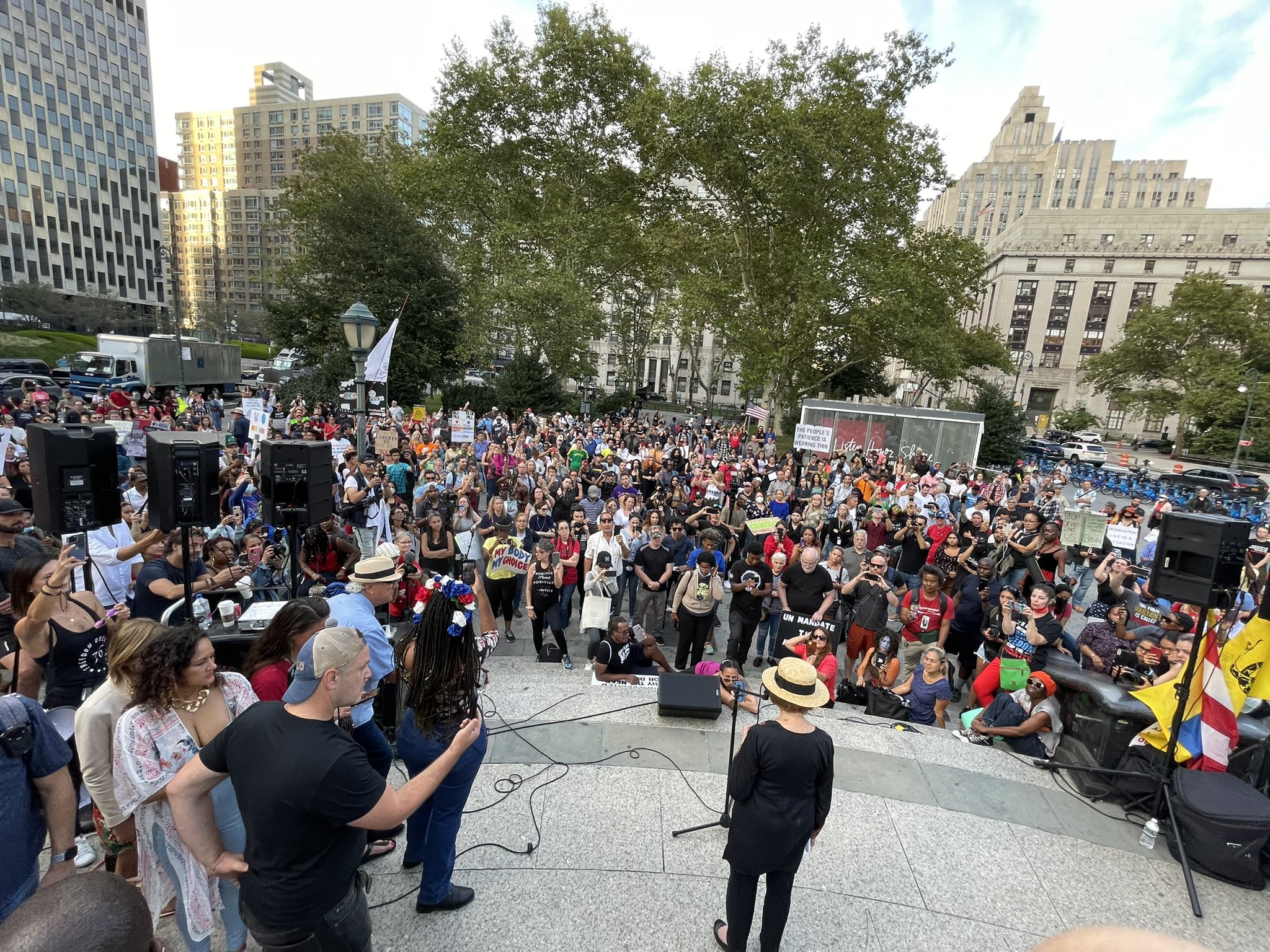 "We are not going to be forced to be a communist country, we are sick and tired of this crap" said one of the protesters as Hundreds marched through NYC protesting vaccine mandates for teachers." (scooter caster) [https://twitter.com/i/status/1445184766114926600] 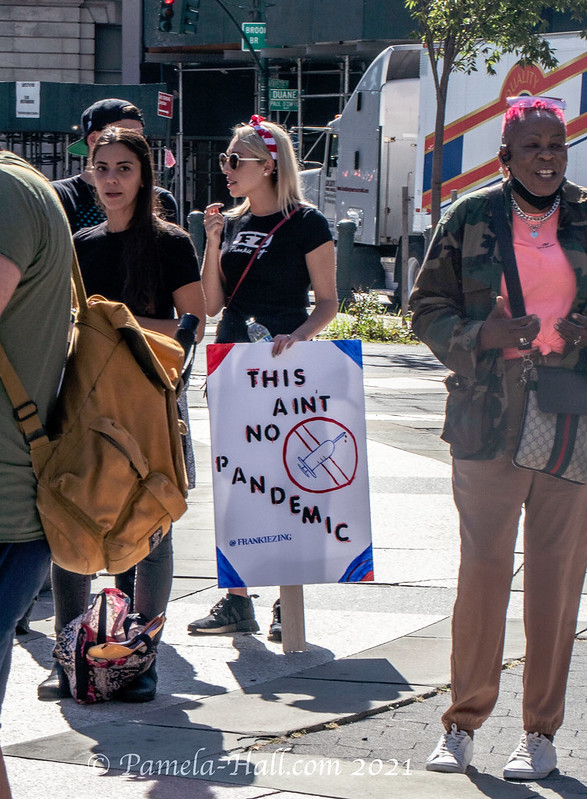 Meanwhile, the plandemic drama continues to grow with warnings of virus mutations, causing the gullible to panic and obey [ NY Daily News]

But, the leftards do not relent, smugly characterizing anti-mandate vaxers as the neanderthals aka the enemy to mankind.

Oct 4, 2021- "The anti vaxers are a hellish stew of MAGAs, QAnon, anti vax, anti mandate, 'my body my choice' (which oddly has been a pro choice chant for 50 years) stop the steal, conspiracy theorists, 5G chips in your brain. I just don't get it" S Bachom

As this report winds down, caught a link to this video at rumble:

InfoWars /War Room: "... the shocking amount of news that is being ignored by the masses as the true danger of the COVID vaccine is being revealed by victims hurt from the jab." [https://rumble.com/vndn8j-tens-of-thousands-dying-from-jab-and-no-one-wants-to-talk-about-it.html]

"Inside hospitals, they say the vax is BS; FDA wants to treat the unvaxed like Nazis treated the Jews. For the authoritarian Left - dialogue not allowed  Globalism vs Nationalism. This is now a political war. (NBA player) Not L vs R. GWB was always a globalist. They are politicizing medicine (Bill Mayer) Worldwide goal, no medical freedom." 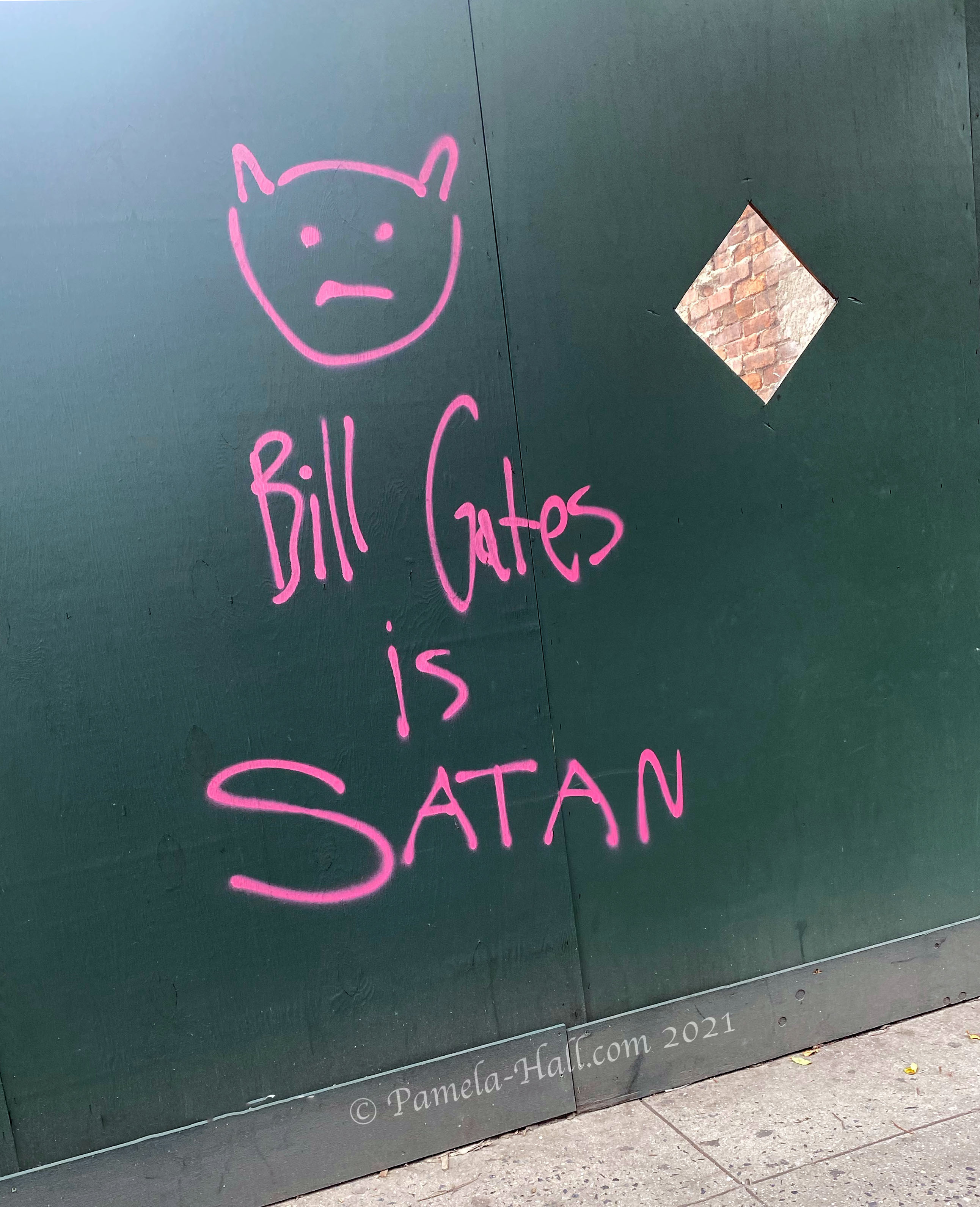 "COVID is the TOOL to bring in the One World Government."

"FEAR is the tool to get you to accept it.
The Vax says you have no autonomy.
The government is in charge of your body."

"So my 7 year old daughter was just kicked out of her NYC school due to inability to wear a mask even with a mask exemption from a physician in place. This is the world we are living in where a 7 year old child is denied an education and outcast like a problem due to an illegal mandate and no one bats an eye. Almost a month later my LOI is not approved and I was sending her because I didn’t want to affect her attendance plus she loves school so I promised her one more week. It’s sickening how little they actually care for our children. I will not comply and allow my child to sustain further physical harm from mask wearing!" ( Face Book)

And now, Virtual Students have to get the jab. 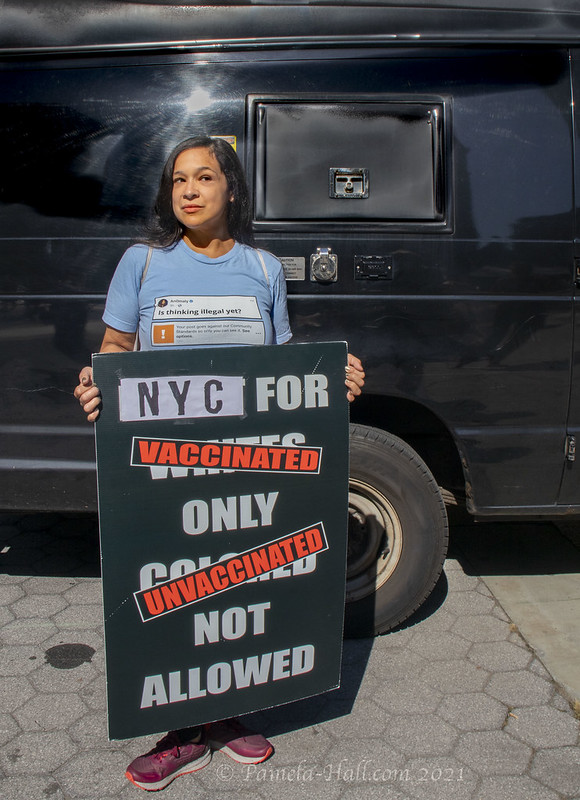