The Press Conference was at One Police Plaza and was presented by AIFD/AILC (America Islamic Forum For Democracy) and AILC (American Islamic Leadership gathered with Congressman Peter King ( R-NY) to SUPPORT the Commissioner Ray Kelly and the NYPD.

From VSB: Nice to see the NYPD get some well deserved support, but I am concerned. Will people start thinking there's a Safe' Islam' just because these are such thoughtful and patriotic Muslims?

Slideshow of Press Conference during and after ....

What follows is the complete Press Conference in 6 videos. (This includes the Q and A with the reporters. ) Part 1- Dr. M Zuhdi Jasser, President American Islamic Forum For Democracy makes the  opening statement

And the 7th video is  a bit of a statement made by Linda Sarsour of The Muslim American Civil Liberties Coalition to FOX5 and NEWS12.  Perhaps there were others from the opposition present, but Sarsour was the most obvious

The following is a statement from the American Islamic Leadership Coalition

"As American Muslim leaders, we come together to defend the US Constitution, uphold religious pluralism, protect American security and cherish genuine diversity in the practice of our faith of Islam."  The AILC Foundational Principles


The AILC seeks to prevent:

1.      The instrumentalization of Islam for political purposes, and/or the exploitation of our faith community for political gain, whether by Islamists and their non-Muslim allies in the West, or their opponents.

2.      The imposition of laws based upon a falsely divinized human understanding of the Qur’an and Sunnah, as often occurs when Muslims idolize shari‘ah without understanding it.

3.      The preferential treatment of, or discrimination against, any community based upon its religious beliefs.

4.      Legitimizing the practice of deception, intimidation and/or violence in the name of Islam.

1.      The persecution of Shi’ites, Ahmadis, Ismailis, Druze and Bohras, as well as those Muslims who have turned away from Islam and become agnostic, atheists or converted to another faith.

2.      The persecution of non-Muslims in Muslim-majority states.

3.      The practice of ‘takfir,’ which allows so-called “scholars” and clerics to label fellow Muslims as apostates, and impose a death fatwa (religious opinion or ruling) upon them.

4.      The judicially- and/or extrajudicially-coerced observance of any religious or cultural practice that strips the individual of his or her autonomy and equality.

May our nations, peoples and varied yet complementary faiths serve as a cornerstone for an emerging global civilization, in which different cultures and religions serve to mutually enrich, rather than threaten or destroy one another.

“And if God had so willed, He could surely have made you all into a single community, but [He willed otherwise] in order to test you by means of that which He has vouchsafed to you.  Vie, then, with one another in doing good works!  For unto God must you all return; and then He shall make you truly understand all that on which you were wont to differ.” (Qur’an 5:48)

The leave us with a quote from the Quran.  Speaking of a "a global civilization." That just supports the Islamic goal of domination, of the Umma. That's Islam and it's not good. Why, onece they are in America do they feel compelled to remain Muslim?

"...many remain in a religion because of family ties, cultural norms, and sheer inertia. But over time, religion — and faith in God itself — is judged by its fruit. Which is how it should be.


And the best-known fruit of Islam today — in countries calling themselves Muslim, such as Iran, Saudi Arabia, Pakistan, and Taliban Afghanistan, and certainly among the Islamist groups mentioned above — is so ugly that many millions of people are increasingly repelled by religion and by God.

....when the best-known actions of some of the most religious people in the world are kidnappings, slaughter, torture, mass murder, suicide bombings, beheadings, and mistreatment of women unparalleled in recorded history, then religion and faith in God suffer everywhere."

VSB: Better we should  stop wishing for a 'nice Islam', in a country like America. It's Oil and Water.   They know it and that's why they work to confuse and to equivocate.

" Instead of bowing and scraping to the Islamic supremacists and feebly protesting that we're not really racists and hatemongers and all the other calumnies and canards they throw at us, we should be taking the fight to them, and standing up and saying, "You are fronting for the most oppressive ideology on the face of the earth.  You are fronting for evil.  You are carrying water and running interference for the denial of free speech, the denial of the freedom of conscience, the institutionalized oppression of women, the subjugation of non-Muslims, and worse.  You're fronting for stonings, amputations, the murder of apostates, the treatment of women as possessions of men, the madness and senseless violence that we see in this furor over the Quran-burnings, and more.  You shout us down on campuses and do everything you can to make sure we are not heard in the public square.  And you call us fascists?  You are the quintessence of fascism."


VSB: We are told that, in America, we have nothing to fear from Sharia Law. We are told that in America our Constitution wouldn't allow Sharia Law to abrogate our rights. But, examples are coming in from around the country showing a creeping Sharia chipping away at those protections.

And concurrently, we have a push on for a National Holiday to celebrate Mohammed's Birthday , suggested by a certain participant in the NYPD presser, Imam Qazi Qayyoom (in the sunglasses and yellow stripes) His ".... objective, aim and goal ( is) to establish the real meaning of ISLAM-I Shall Love All Mankind."

Guess Mo's B-Day will help move that LOVE right along. 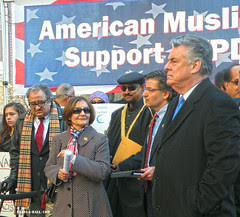 Not good. NOT good at all.

For The Record, this is a published list of their supporters:

"....a distinguished group of members devoted to our cause."