Back to Exhibit Hall, first thing Saturday morning and caught a few displays I hadn't seen on Thursday. ( separate post will be of the exhibits)

Saw Gov. Bobby Jindal, Governor of Louisiana, speaking in the Ballroom, so I headed up stairs (but way too slowly)... 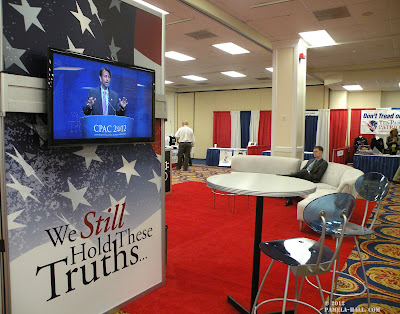 As I entered the Ballroom, I had realized I had missed Jindal and now Dinesh D'Souza was ending his speech. What I did hear of D'Souza though, was very interesting. AND, he was promoting a film, "The Roots of Obama's Rage".  (Definitely looking forward to its release)

Next up, the very engaging Ann McElhinney (Go Irish!) came out quickly. She's a Journalist-Filmmaker promoting another film I will be looking for as well, "Frack Nation."

This panel that followed McElhinney I had on my schedule (9:50 AM.) Lasted only about 25 minutes, but was as interesting as I had hoped. An important, timely and sensitive topic during an election year,

"... when the Democrats are attempting to use this particular point-of-view to divide and conquer. Defending the Rule-of-Law does not make one a RACIST, nor unpatriotic...." . "What part of LEGAL don't we (you) understand!"

Former Ambassador to the U N,  John Bolton, was the speaker at 10:35. Couldn't stay for his  speech but grabbed a picture (the crowd LOVED him!) 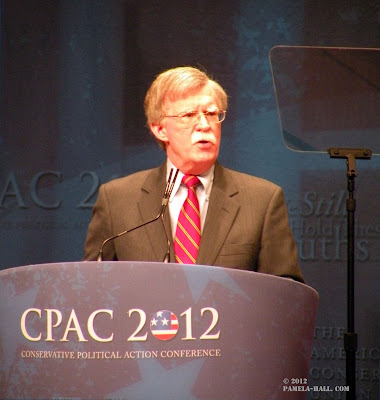 BTW- I hadn't posted these pictures of Bolton in lobby of the Algonquin Hotel (September 2011)  Filmmaker David Miles was pre-recording Bolton's speech for the Geller-Spencer " 9-11 Rally".
I LOVE the Algonquin lobby!(LOVE Bolton!)

Leaving early today. Have to check out by Noon (at the latest 2 PM) but at that point would be dragging my camera-gear around, packed and ready for the train.  No work would get done (I know, I KNOW! I was going to miss the Divine Sarah. But Urban Infidel was RIGHT THERE)

Yet, even with my gear packed away, I did catch some fun in the lobby with my trusty Nikon P80. Noticed I was seeing more "Santorums" than "Romneys" and  "Newts" 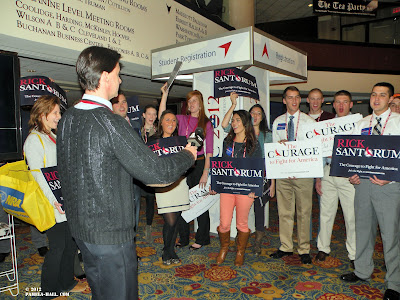 Even so, the Santorum, Romney and Newt Teams seemed to be enjoying a friendly competition as they handed out their materials (and one improvised bumper-sticker)