DOWN WITH THE WALL! UP WITH THE STREET! This was the kick-off event of the Resist, Reclaim, Recreate N17  Movement. (Looking VERY Marxian, don't you  think?) 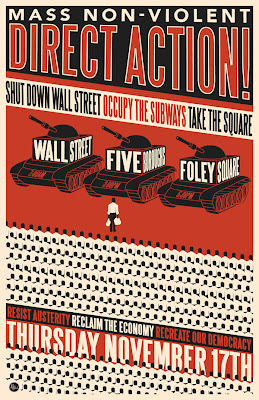 Today was billed as "Mic Check! Global Day of Action".
#OWS declared November 17, 2011 a day to celebrate, all day, their second month anniversary
A Day of Reckoning. A Celebration that began at 7 AM with chaos in the street. They insist that Bloomberg made them do it.  All those Liberal Mayors. Attacking Democracy!

After lunch (or LUNCH as they billed it) at 3:00 pm:  "OCCUPY THE SUBWAYS & RECLAIM our democracy!" They threatened to shut the subway system down so the 99% couldn't get to and from work.

So, after the orchestrated chaos on Wall Street had abated, I decided to check out two locations at 8th Avenue and 23rd St ( C Train ) and the City Hall (R Train).  From what I saw"Occupation Subway was a Big Bust."

23rd Street had a smattering of media, none of whom stayed very long.

The People's Mic was supposed  to share stories of how banks and corporate greed have impacted the 99%, never happened. Nope . Nada.

Everyone seemed to be real low-key. Even the cops.

Over-sold OR the participants were just too lazy to do as they'd been instructed.  Instead, standing around chatting with each other and ignoring the passers by.

23rd st is also the local stop for the The Episcopal Church's Theological Seminary.

Without the seminarians,  this would have been an even smaller turnout...

The Episcopal Church, all the Mainline Churches seem to be supporting #OW, cause "You Know, Jesus was a SOCIALIST"

FOOLS, Tools and the reasons for demise of these denominations are not exaggerated.

Liberation Theology . #OWS is what 'a' CHURCH looks like?!

The 99% had a lot of apprehension about the shutting down of the city; the subways. But, not this guy!  "Be NOT Afraid". Nothing to fear but...."

Union Square and the students, apparently that was the only stop with any action,  with students chanting "Shut the city down!" They spilled in to the streets and hurt the average 99 % who live and work in that area. Rioting so we can all be EQUAL!

N17 was billed as "Mic Check! Global Day of Action"  by #OWS . A day to celebrate, all day, their second month anniversary. But WHY "N17" ?
Point-of-information (from David R ) on WHY N17


Choosing November 17 was not a coincidence.

It is a significant date for the  Revolutionary Organization 17 November

A Marxist Revolutionary Guerrilla, organization (characterized as a terrorist group by the Greek state[1] and the United States[2] and the United Kingdom) formed in 1975 and believed to have been disbanded in 2002 after the arrest and trial of a number of its members. The group assassinated 23 people[3] in 103 attacks on U.S., British, Turkish and Greek targets.

Nothing was sacred. Nothing off-limits They killed and terrorized with abandon.  And THIS  is  a role model for #OWS as they vow STOP Capitalism.

N17 is here so so we can finally be FREE.

We must riot in the street and throw things at the cops ( vinegar, lit cigarette, bricks) so we can all be FREE.

I caught a bit of the QUIET action at City Hall Subway stop where the participants were directed to Foley Square by #OWS volunteers.

The sidewalk around City Hall and City Hall Park was lined with Police. For hours, waiting for something to happen.  But, as far as the Subway Occupation went ....Nada...

They will claim there were over 30,000 people in Foley. Having attended many rallies and protests there and after walking through the entire RECREATE portion of N17, predictably the attendance numbers seem to be  GREATLY EXAGGERATED.


Even so, Bloomberg and Company need to hold firm against this formidable EVIL ; greedy, envious and determined to destroy America. One Occupation at a time.... ( so we can be FREE)