As Democrats met inside, to choose the un-elected Gov Hochul to now run for election, the climate-commies were outside ... 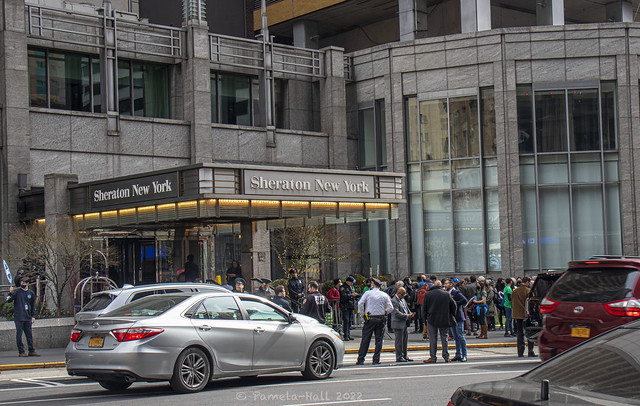 ... reminding Hochul that she promised to make NY State an all ELECTRIC State; to BAN fossil fuel aka GAS. And she needs to do that NOW! 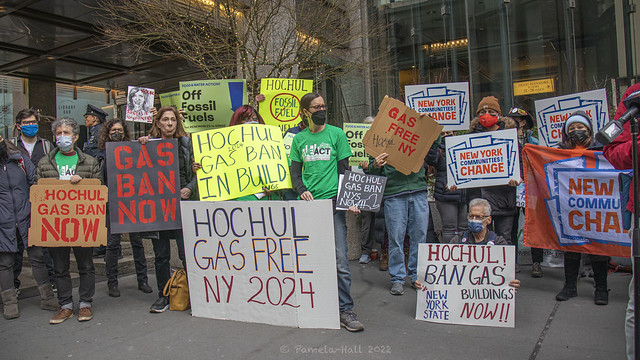 (This Cuomo-clone is going to be very BAD for NY) 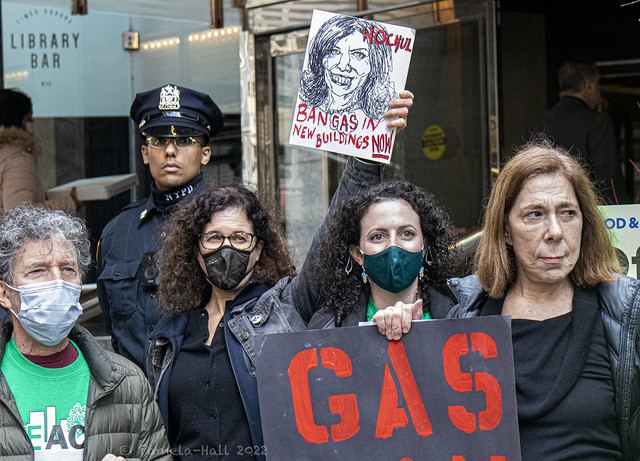 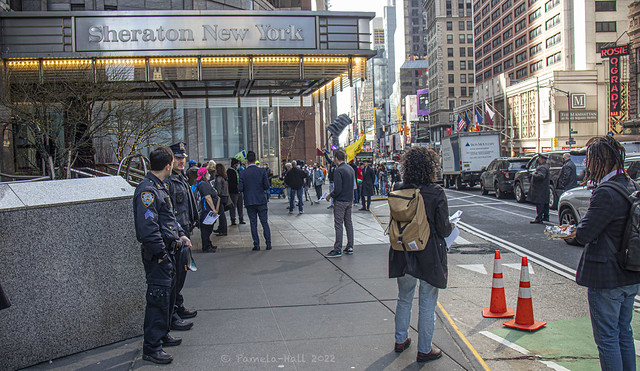 . 4 short VIDEOS: Part 1- Part 1 is the Introductions to the BAN Gas Protest/Rally. "Stan" says our building are STUCK on fossil fuel.  This must END. He also introduces all the LEFTY orgs behind the BAN Gas Movement. Starting in 2024 fossil fuels will be banned.
Part 2- (excerpted) Two women spoke of fossil fuel  disasters that impacted their lives. And why it is imperative that we ho from FOSSIL FUEL to ELECTRIC.

Part 3-This man is a contractor and climate activist contractor promoting a GAS FREE NY. (excerpted). He says the TIME LINE to go ELECTRIC is too long (with too many loop holes). There are moral and legal obligations to PREVENT Climate "Change". He claims this is a solvable problem and adds that very frack gas building is an opportunity lost to reduce our carbon emissions. We're missing this opportunity NOW to reduce our carbon foot print. He then mentions their campaign to ban fracking in NY State. We DID IT! Gov. Hochul needs to put the all electric act in to THIS budget.

Part 4 -  Brooklyn activists talk of their success in Pennsylvania killing fracking deals that the farmers wanted/and needed. Now they are focused on a pipeline planned in Brooklyn. The second woman promotes the success she had filling the youth of America with climate fear of the future.

NEW YORK (CBSNewYork) — The fight against climate change is coming to a building near you. Gas-powered stoves, space heaters and water boilers will soon be a thing of the past. On Wednesday, the New York City Council voted to ban natural gas from all new construction and require electrical instead...

“This bill was about prioritizing people over profits and over properties,” said Councilwoman Alicka Ampry-Samuel, the bill’s sponsor.

I’m so proud of our work this term confronting crises with sound action & I look forward to the next Council picking up where we left off.  NYC Council Speaker Corey Johnson (@NYCSpeakerCoJo)
Ampry-Samuel said New Yorkers must take steps to fight climate change that scientists blame for mega-storms like Hurricane Ida and Superstorm Sandy.
“Sandy destroyed my home because of fracked gas that does not stay in the earth. It’s adding to the climate change going on,” storm victim Rachel Rivera said.

Proponents say the ban will significantly reduce the burning of fossil fuels, which drives climate change. Opponents say it’ll cost thousands of jobs and could lead to city-wide blackouts.

“That’ll be putting a dent in a lot of the workers in the city, could be leaving a lot of people out of work, because it’s a major part of our work,” plumber Jose Encarnacion said.
Listen, we’re not against climate control. We’re all for it, but it has to be done at the right pace and we got to have a plan in place to do it,” added Mike Capuzzo of Plumbers Local 1.
“First thing, we don’t know if the wires in the street are even big enough to handle it.”
National Grid says it worries about strain on the power grid during winter months, and consumer analysts say they expect heating bills to rise significantly.

“Natural gas is our most abundant energy supply here in the United States, and to take that out of the equation, it’s just a simple matter of supply and demand. Less energy available means the cost of energy goes up for everyone,” said Mike Butler of the Consumer Energy Alliance.

Mayor Bill de Blasio called the bill a historic step toward the goal of reaching carbon neutrality by the year 2050. Developers negotiated a delay until 2027 for buildings taller than seven stories.

More Climate lunacy. On Joe Rogan, Andrew Dessler, a climate change  biggy, refused to debate the pros/cons of his position.

Staying true to his word, Joe Rogan brought Andrew Dessler the “other side” on to represent the mainstream narrative on climate science. When asked if he would ever debate Dessler states “I won’t debate the science, the science is set”. Sound familiar?

So, basically, Dessler claims there's no way for him to be more convincing than someone saying the opposite. His argument boils down to an appeal to authority. And yet he wonders why people aren't convinced by pronouncement of fact versus someone willing to explain and debate.

=== Since HILLARY was also speaking inside,  her no mandates 'fan club'  challenged the climate loons by chanting: LOCK HER UP, LOCK HER UP (over and over) === 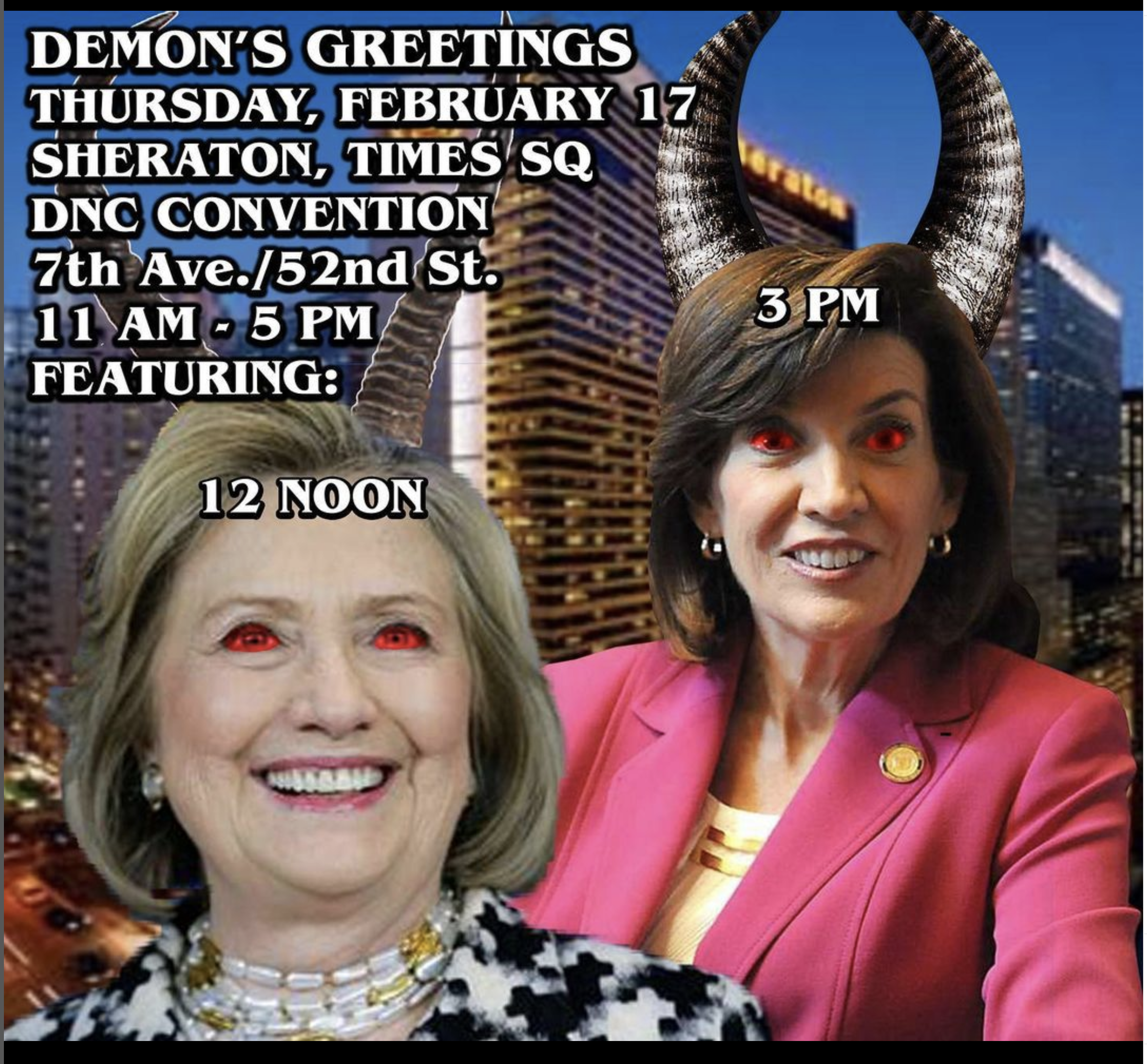 Say NO to Mask Mandates was also meant for our UN-ELECTED Gov. Hochul. She, along with Mayor deBozo's clone, Mayor Adams, has maintained the mask mandate in NYC. The State is mask-free but NOT NYC. 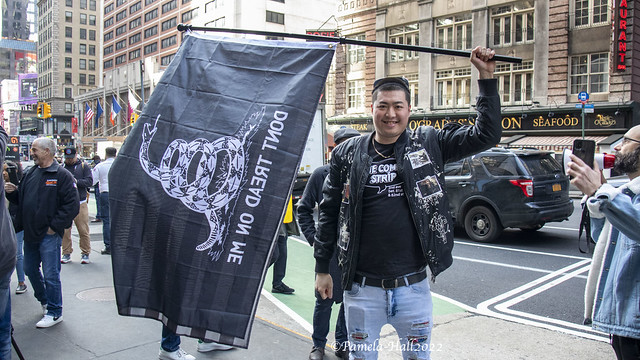 ..You Tube. This No Mask Mandates Protest aimed at Hillary and Gov. Hochul was outside the hotel (along with the Commie Climate Loons) while the Democrat convention met inside. The hard core lefties were also demanding a Gas Free NY State. While I covered the Climate Loons, the Hillary Protest disappeared. (They reappeared later to heckle Hillary as she used a side entrance) Sorry I missed that)

The protest may have been small, but very LOUD when they reappeared later to challenge Hillary's coming and going at the Sheraton SIDE entrance. See the twitter videos :

"Clinton reacted to Durham’s latest filing on Wednesday, criticizing former President Trump and Fox News for "desperately spinning up a fake scandal to distract from his real ones." [Fox News]

Luke2Freedom TV (@L2FTV): "Anti-Mandate activists took the side of the street next to the Sheraton Hotel to voice their frustrations where Hillary Clinton and Governor Hochul made an appearance."

[Where indicated, pictures and video property of Pamela Hall-VSB]