November 11, 2016 - On the bus - Fifth Avenue- Trying to get to mid-town. Traffic is very, very slow. After speaking to a couple of Brits - heading to the U.N.- I remembered they were closing off Fifth Avenue, beginning at Fifth and 57th, because of the PROTESTING sore losers. 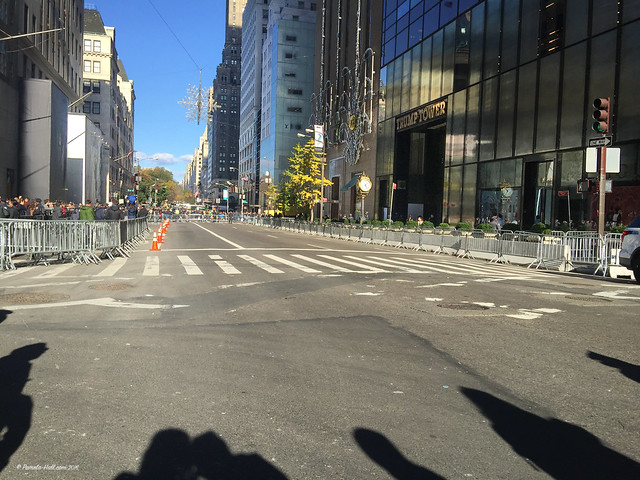 A closure caused by the protesting rabble .... FUNDED by George Soros and company.....

“We will gather … in cities across the nation to affirm to ourselves and one another that, despite the outcome of this election, we will not give up. No matter what challenges confront us in the times to come, we will unite with one another and defend our communities—across race, religion, gender, age, ability, national origin, immigration status, sexual orientation, class, and all of our identities. The fight for a nation with liberty and justice for all—and with an economy and democracy that work for everyone—continues.

.... (we) share our reactions, pledge our mutual solidarity, and resolve to forge ahead together in this moment of peril. We have experienced setbacks before, and we have always come back. Our movements are resilient and unstoppable.”

"Note the call to resistance – the logic being that these leftists are the ones under attack, and only reacting in rational defense. This is what nearly eight years of an Obama administration, including a radical, activist Justice Department and a propaganda-pushing Education Department, have brought. Perhaps a Trump administration means that come January 20, the adults are back in charge." [the excerpt above from Pamela Geller] 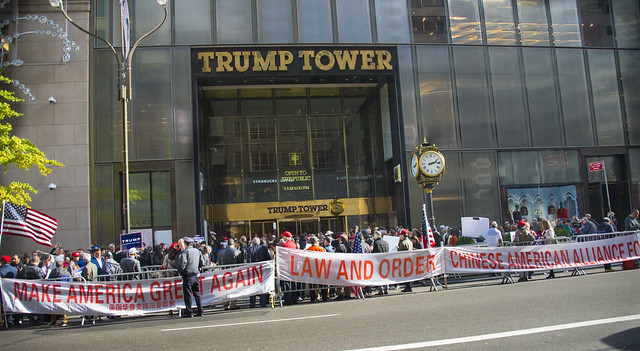 My how things changed after a few days and a TRUMP Victory can make Soros and Company.... Making a mess of travel - controlled chaos that the rabble loves.  And so does the media. 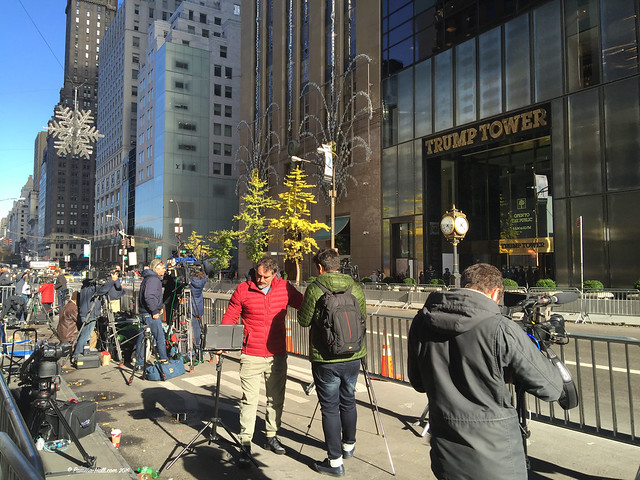 Got off at 60th. Paused at Trump Tower- seeing the new lay of the land. Much has changed since Sat. November 5th. 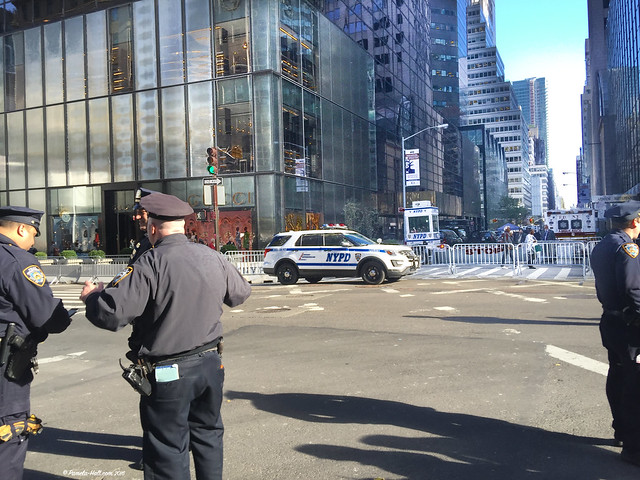 Many barricades. A NEW police-hut at 56th. 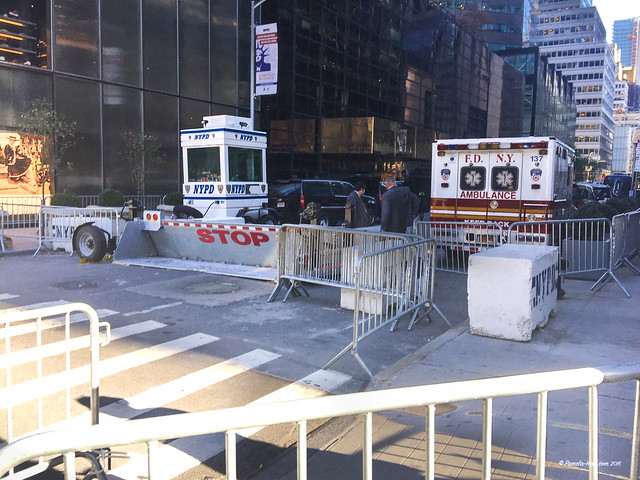 Police cars. Police. And Tourists. (Lots of selfies going on) 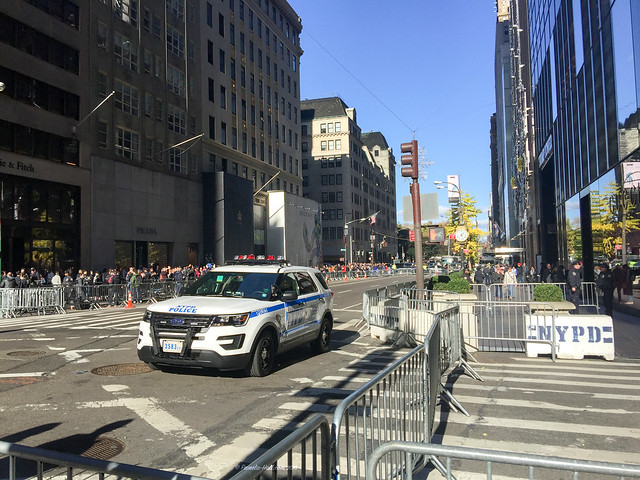 However- I found the closure of Fifth was more than Trump Tower.  It was the Veterans Day Parade!

They used Fifth, as always, from 23rd to 53rd and this street closure was A-OK.  Took some cellphone pics and vids. Then headed back to midtown.

Later I read a letter from a Retired Navy- Sheepdog- R Davis. I always appreciate his thoughts (excerpted below)

So I kept my word, I went to bed early on Tues and did not know the result until Wed morning around 0600 when my son-in-law texted me "Trump won!"

Maybe the most satisfying thing is that the Clinton machine is over, their foundation and their influence are finished. The D's don't have any obvious stars right now and we have a bunch.


For me, I want to start building the wall on day one and dismantling ObamaCare and rebuild our military.  We need more active duty so we don't have to rely on our reserves.  Especially our active duty Army and Marines - I hope he doubles them, and he said he would increase our Navy to 350 ships (and increase our submarines too).  We need that to be a top priority.

So I'm happy but I'm also very very annoyed at these disgusting disgraceful rioters in cities all over America - they are being influenced by anarchists, some paid, all rabid.

Obama and the democrats love it, we hate it - hopefully the cold weather will help end it soon.

I'm grateful that Trump will stop the insane inflow of Syrian refugees into America, he said that people coming into America "must love our people" - also, he will bring respect to our police officers and all law enforcement officers and first responders.


Trump understands "safety of ship and crew" and Law and Order is a top priority of his (mine too). America First!!

Thanks always for our troops and our cops and their families - they are the best of us - so glad they will have Trump looking out for them instead of Hillary who supported "Black Lives Matter" and takes money from countries that hate us.

To the Troops and Cops and all Law Enforcement!
To their families!
To America and Israel!
To Victory over evil at home and abroad! 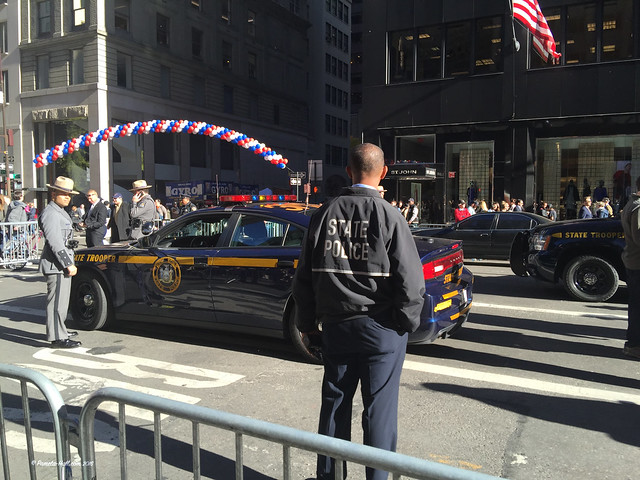 Jihad never sleeps - they want to kill, but now they better keep one eye open....