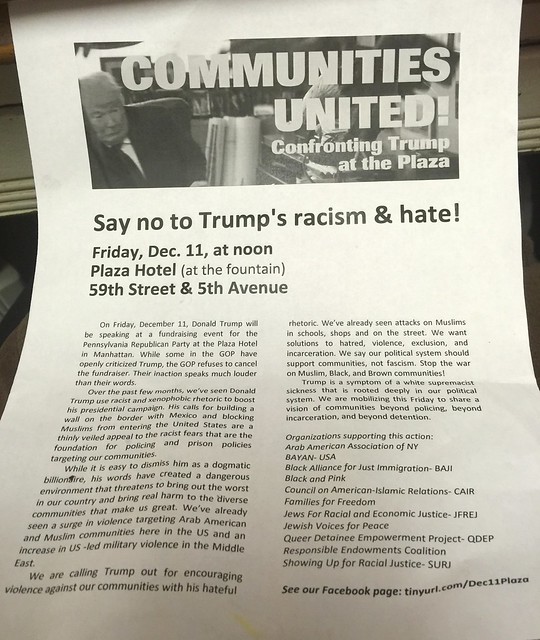 The GOP "Banner-Nut Luncheon-Crashers" was a small group of Commies, Muslim, Arab, immigrant, and LGBTQ community members – at the south entrance to the Plaza regrouping after being THROWN OUT of the GOP Luncheon. They were talking quietly to the press [“Muslim, Jewish, Queer, and Immigrant justice organizations joined together to pull off this critical action.


“Wherever Trump goes, whenever he has a platform to speak, the people will be there to resist and disrupt”. SO, they went into attack mode as soon as they saw the volunteer from the Pennsylvania GOP talking to the press. He had to be shut-down with SCREAMING and screaming and more screaming.

Twitter video of the obnoxious harassment of the GOP volunteer

“Tell us WHY. Why do people gotta to DIE?”, “TRUMP is trying to bring us DOWN, attacking people Black and Brown”. He was relentlessly harassed (mid-interviews).


The Commies CHEERED as the volunteer was forced back inside the Plaza (First Amendment be damned) Pictured from L – Zakararia(h) Ismail Kronemer and Jamela Hammami. Far right, Jorge Gonzalez. 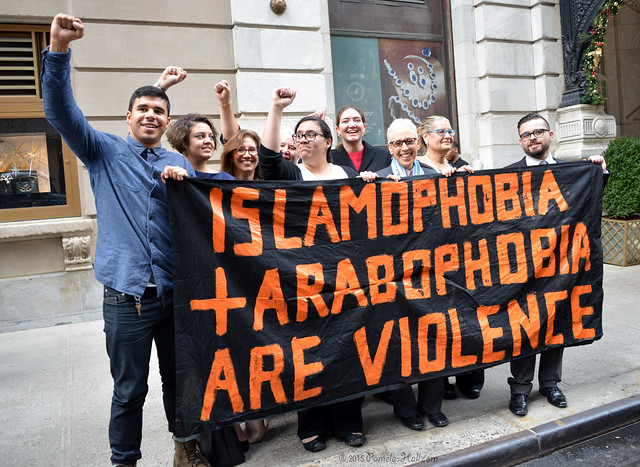 But, the GOP volunteer was NOT finished. He returned confidently and finished his interviews. (starting at 2:57 below) First part of  my video is the very LOUD verbal assaults by the Banner-Nuts.

FYI: Leading the harassment was “Megaphone-guy”, Zakarariah Kronemer, who is of Egyptian descent,   and the “Loud and Proud”, transgendered ,  Imami Henry [Staff Organizer at the International Action Center (IAC).]


Found more on the actual invasion. Seems the Islamophobia Banner-Nuts  managed to invade the GOP luncheon INside the Plaza. (In spite of LOTS of security) Because….


“An ally inside the event was able to open a side door allowing the four demonstrators to enter. The Arab and Latino protesters effectively disrupted Trump’s speech singing, “Mama Mama tell us why, why our people gotta die. Trump is trying to bring us down, attacking people black and brown.” A dozen security guards and some attendees of the event swarmed on the demonstrators and aggressively dragged them out. In the commotion, one of the members … an arab woman , Jamela Hammami, a demonstration organizer and Executive Director of the Queer Detainee Empowerment Project, was thrown to the ground.”

Videos reveal how resistant and practiced they at NOT leaving when asked. When ever possible they THROW themselves to the ground and wail and moan. What matters is lots of copy. Which they got.

Jorge Gonzalez, who was injured while serving in the Iraq war, was thrown down a flight of marble stairs after disrupting an event where Donald Trump was speaking inside the Plaza Hotel, demonstrators said.

This video of their unceremonious expulsion is from Twitter


Without too much searching, I found the names and predictable background info of the ‘players’ who crashed the Pennsylvania GOP luncheon. (All “Loud and Proud”)

Zakarariah Kronemer, is an organizer for the Virginia youth climate justice movement who is of Egyptian descent. He said, “The people must interrupt him (Trump) anywhere he is invited to speak. It’s leading to violence in the Arab community [in America]”.


Jamela Hammami, “(Trump’s) statements are completely steeped in levels of Islamapobia and Arabphobia…a symptom of being a part of american society still steeped in xenophobia reminiscent of the McCarthy era. We will continue to face hate and violence until we fight against it and demand safety and freedom for our people.”


2nd video of the expulsion from CBS News

“Mama, mama tell us why, why our people gotta die? Donald Trump is trying to bring us down, attacking people black and brown,” the mini mob chanted

The protesters had their own messages to impart and the press loved it. They are adored…respected…the “20-somethings” as well as the older Jewish contingent (who actually attended the luncheon.)

Jewish seniors, veterans, and white allies standing up to Trump’s hate and his manhandling goons. #StandUp4Refugees 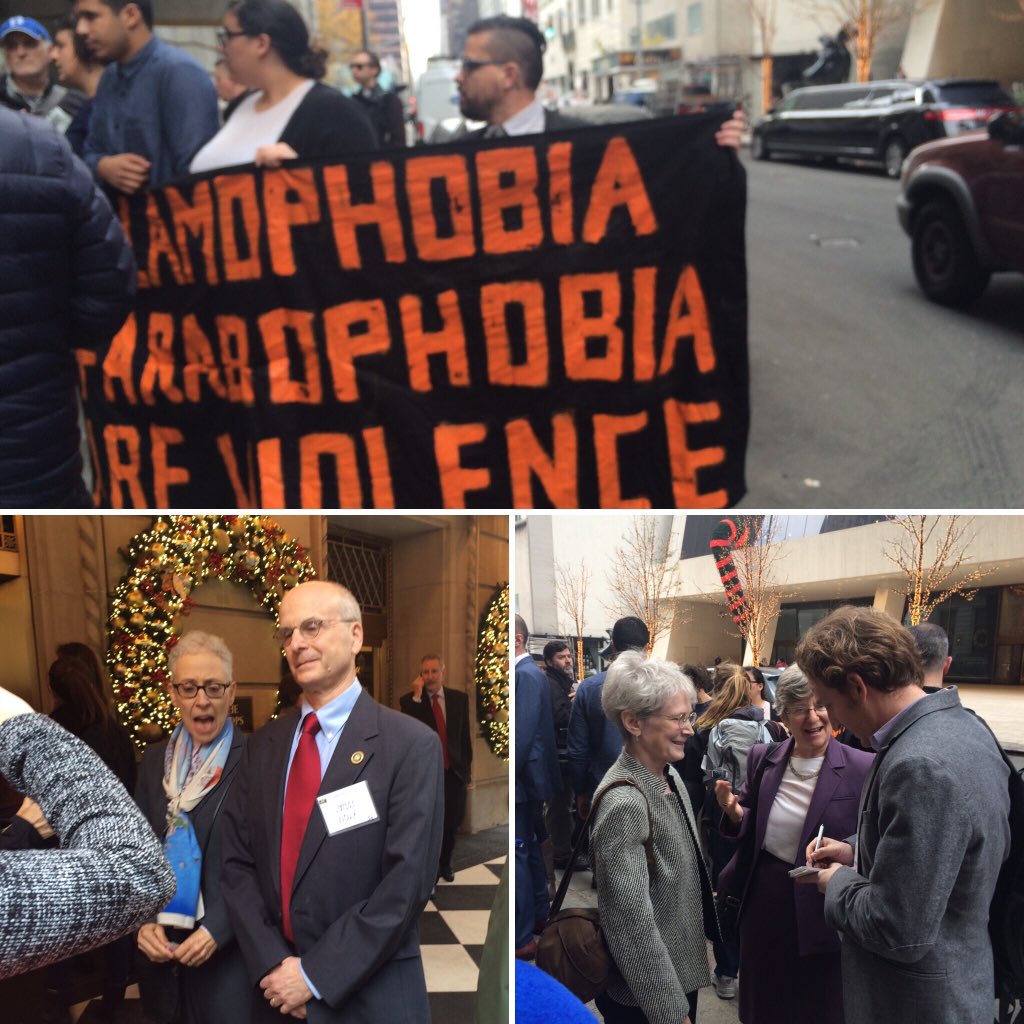 
They were protesting Trump’s call to close the United States to Muslim immigrants and visitors. “It’s our responsibility,” said Sandra Abramson of Jews for Racial and Economic Justice.

“We believe that this country has values and we need to uphold those values.”

Abramson, a Brooklyn resident, says she was allowed to take the elevator after being removed from the event.

Sandra Abramson, 69, one of the protesters, said she spent $3,000 to get herself and two friends into the event. She wanted to read a Bible passage, Leviticus 19:33, about the need to treat foreigners justly. She said security removed her, but Mr. Trump “just kept on talking.”

“He was talking about how terrible Hillary was, how terrible Obamacare was … and how terrible the world is except for “The Donald,“ Ms. Abramson said. Others said Mr. Trump also discussed his own strong polling, and the importance of Pennsylvania’s natural gas industry.

Of the check she signed to attend the event, Ms. Abramson said, ”It will be canceled immediately.“

Other activists were tossed out more forcefully. “Trump is trying to bring us down,” they chanted outside. “We have a room in the hotel so we have a right to be here,” said protester Jamila Hammami. “But those guards pushed us down several flights of stairs.”

Hammami says Trump is to blame for the recent wave of hate crimes against Muslim-Americans. “This is because of the hate coming out of his mouth and no one is checking him,” she said.


In case you are curious, more info on the people outside the Plaza being interviewed by the press – after the “invasion” – THEY ARE  WAY TOO OFTEN PROFESSORS – of some sort – Educators. Our college tuition goes to their salaries – Our kids come home INDOCTRINATED.

There were eight older protestors who paid to attend the $1,000-a-plate luncheon, made loud statements during Trump’s speech” saying, outside the Plaza, that they were surprised and offended by their swift removal from the luncheon (Yeah. Sure they were)


“Judith Plaskow, 68, of New York, a Professor of Religious Studies at Manhattan College and a Jewish feminist theologian,  said she bought a ticket at the door with a $1,000 check – a check she hoped to later cancel. She was among a group of women ejected from the ballroom when they stood and started singing, “We are kind and welcoming people.” Asked why she attended, Plaskow said, “I feel ashamed to be an American right now. The level of hate speech that I’m hearing in the country right now, I find deeply, deeply disturbing.”

Plaskow said she is a member of Jews for Racial and Economic Justice and has many Muslim friends.

Another member, Jordan Wouk, said he used a ticket purchased by another activist and was driven to bear witness against Trump. “I wanted to try to let people know that not everybody approves of Trump’s hateful message,” said Wouk, 67, of Manhattan.

“… upstairs Jordan Wouk, a New York Democrat, along with his wife and two other protesters who had obtained tickets to the event, stood and started a disturbance by reciting a revised version of German pastor Martin Niemoller’s famous poem about the rise of the Nazi Party …


The protesters recited the first few lines of their version, which began “First they came for the Muslims,” before being ejected by security.”

She focuses her research on gender, sexuality, and reproductive health, U.S.-Mexico migration and migrant health, the comparative anthropology of love, and the applications of anthropological theory and methods to public health research and programs, was also bounced from the party, said it took just seconds for security to descend on her as she tried to read a statement aloud to the crowd.

“I kept reading it in my best professor voice,” she said, as guards dragged her to the exits.  [https://twitter.com/JenniferSHirsch%5D]

“I’m proud to be a Jew speaking out against Islamophobia,” she said.


Hirsch was among several protesters from a group called Jews for Racial and Economic Justice, who bought tickets, tried to interrupt Trump, and were ejected from the event.

Martha Ackelsberg has her own page at Discover The Network 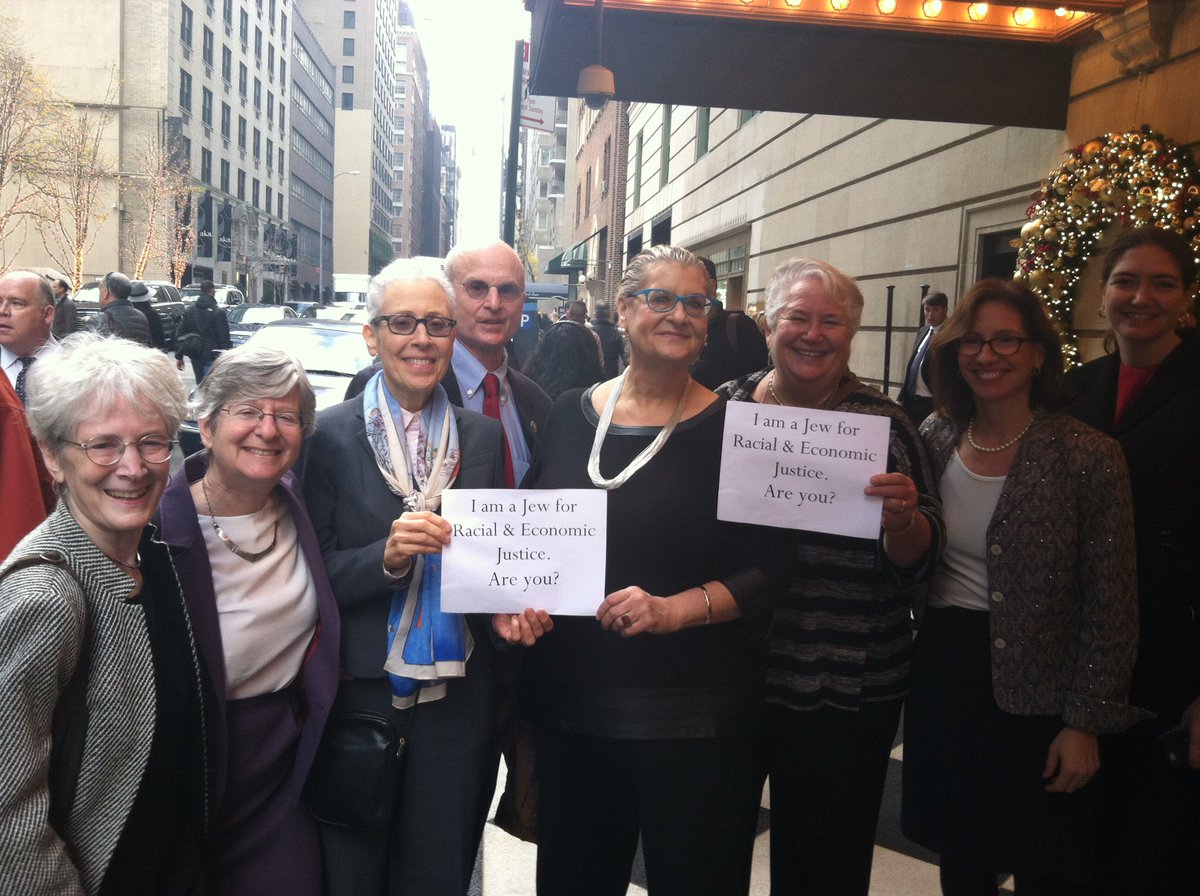 
Born in 1946 in New York City to Socialist Zionist parents, Martha Ackelsberg went on to earn a bachelors degree in social studies from Radcliffe College, and her masters and doctorate degrees in political philosophy from Princeton. She has been a political science professor at Smith College since 1972. She has written extensively on the topics of women’s community activism, gender and public policy, feminist and democratic theory, and women in Jewish communities.

A self-described “feminist/anarchist,” Ackelsberg believes that all Jews who are currently living in the Judea and Samaria communities of the West Bank should leave. She contends that until this occurs, the U.S. State Department ought to withhold financial aid to Israel. Professor Ackelsberg is a member of the editorial staff of Michael Lerner’s anti-Israel publication, Tikkun Magazine. She was a signatory to the LGBT-OUT (Lesbians/Gays/Bisexuals and Transgendered Of the University of Toronto) petition proclaiming the urgent need “to eliminate homophobia and heterosexism from the university,” yet she detests Israel – the only nation in the Middle East that offers civil rights protections and lifestyle freedoms to its gay population.

Martha Ackelsberg and Margery Fine  are like most of the adult protestors, members of Jews for Racial and Economic Justice. 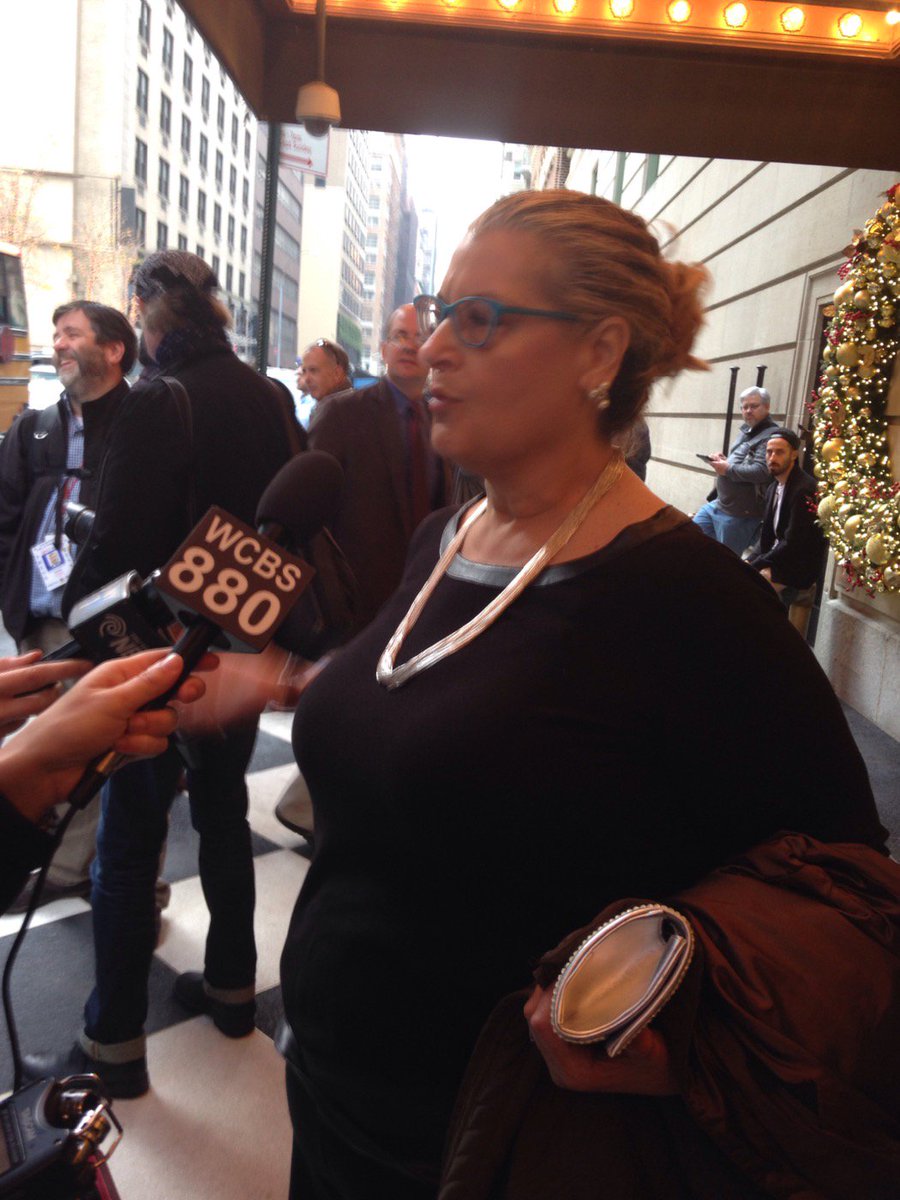 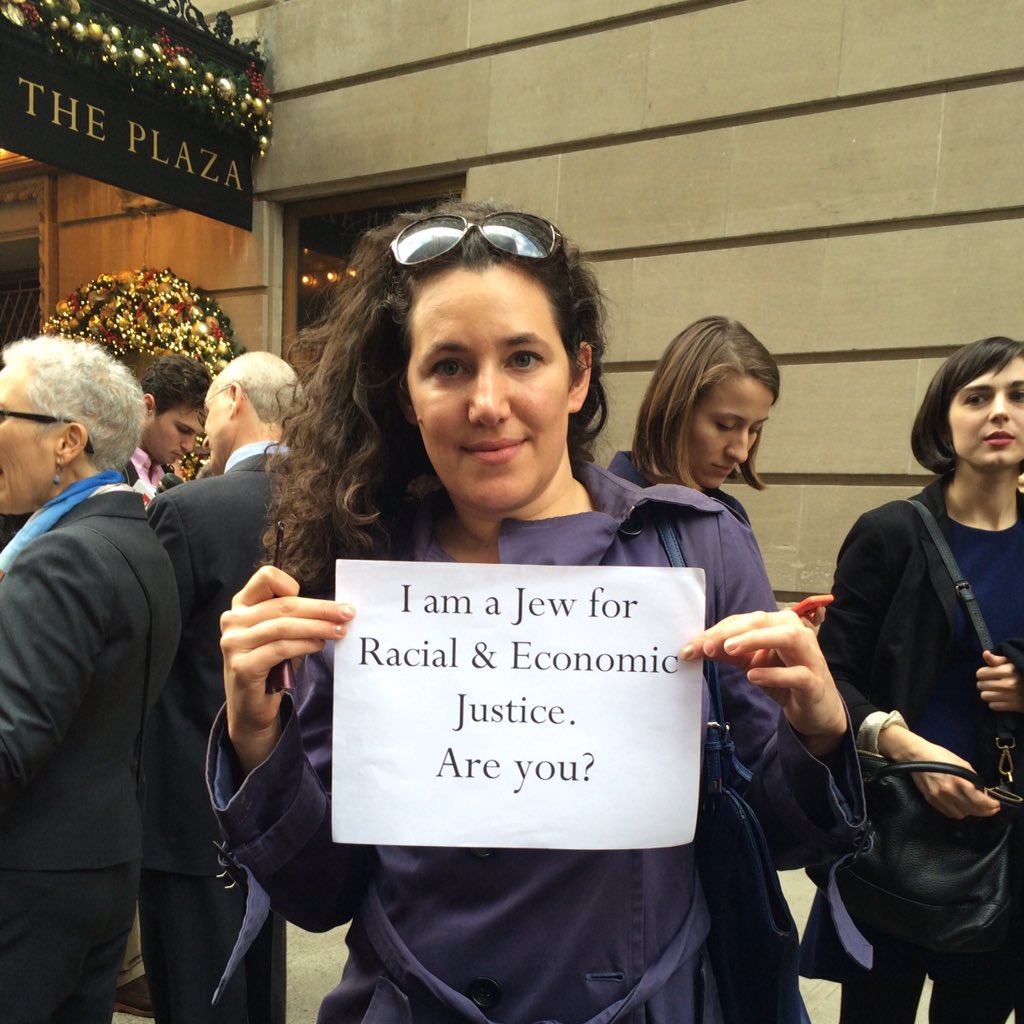 But, the speakers were not the whole agenda.  There was a “pre-show” press event at 11 AM

Keystone Progress executive director Michael Morrill said,  “We put a petition online, asking the PA Republican Party to dis-invite Donald Trump as keynote speaker.” After collecting over 10,000 signatures they attempted to deliver said petition to the Pennsylvania GOP. Predictably, Morrill and Keystone Progress board member, Mike Crossey, were firmly “escorted” away from The Plaza Hotel entrance. (see Getty Images video below at 1:07)


Part 3 is the speakers and a brief look at the t.RUMP/t.RUTT bus