Protest "The MURDER of Leon Klinghoffer" : anti-Semitic Snuff Opera at the Met-NYC 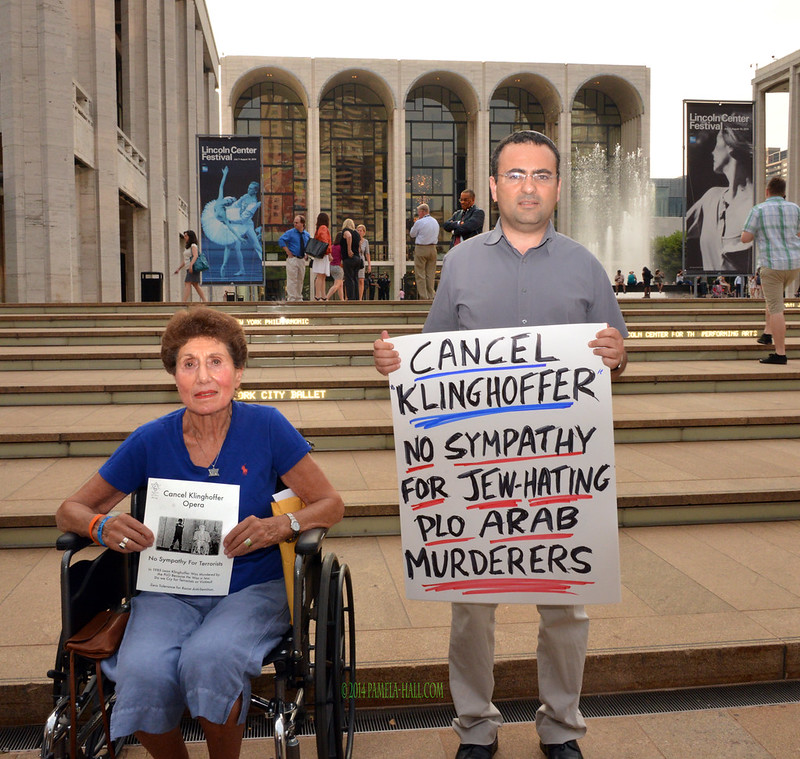 A PROTEST OF THE KLINGHOFFER PRO-TERROR, ANTI-SEMITIC, ANTI-ISRAEL SNUFF OPERA

"The Met is asking audiences to 'look for the humanity in the terrorists, asking people to accept them as 'men of ideals," "We cannot romanticize terrorists and idealize their evil executions.


The vicious anti-Semitic libels that are contained in the libretto, and the historical revisionism of the Israeli/Arab war of 1948 are extremely offensive and dangerous at any time, but especially egregious today when terrorists are terrorizing and killing civilians world-wide."

Americans for a Safe Israel & JCC Lead the Demonstration

AFSI and JCC Watch, along with dozens of supporters, began the first of many demonstrations at the Metropolitan Opera protesting the 8 performances planned for the pro-terrorist, anti-Semitic, anti-Israel opera THE DEATH (MURDER) OF KLINGHOFFER. 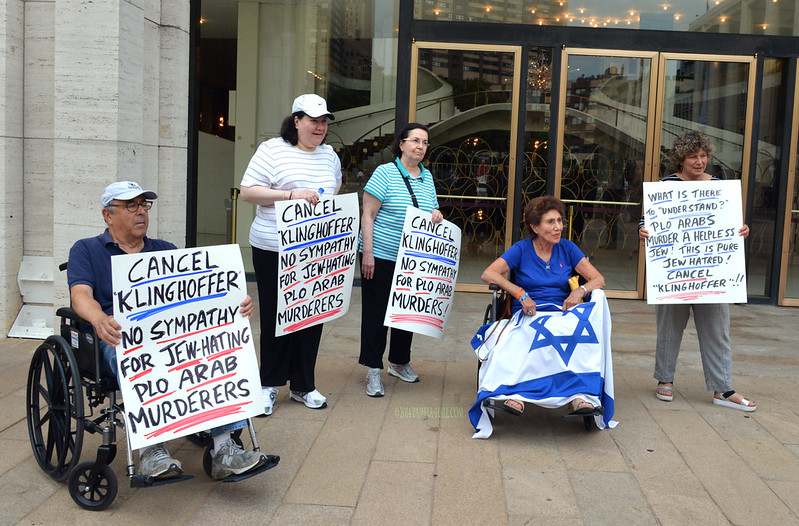 There was media [NY 1, CBS radio and Russian TV (RT), Arutz Sheva and Shalom TV]  filming and interviewing the demonstrators and later, other outlets picked up the story. 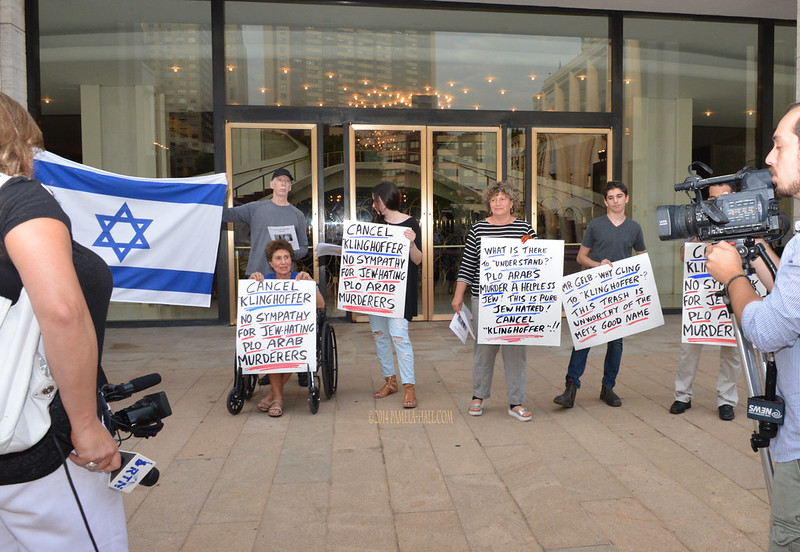 John Adams' opera is based on the 1985 hijacking of the Italian cruise ship Achille Lauro and the murder of disabled Jewish-American passenger Leon Klinghoffer. (The hi-jacking was by the PLO under direction of Yasser Arafat)

The Coalition to STOP Klinghoffer will continue to demonstrate every Wednesday night through the summer, culminating in a huge demonstration on Gala night, Sept. 22.


The Met has said it does not plan to cancel the performance. HOWEVER, the Met did, in fact, cancel plans for a simulcast of the opera around the world, which had been scheduled for Nov. 15.  (John) Adams blasted the decision to cancel the simulcast, saying the opera "in no form condones or promotes violence, terrorism or anti-Semitism."

"They take the issue of a horrible act of terrorism and there's a rationalization - a kind of equivalence, moral equivalence," Jacobsen said last month.


More from Helen Freedman of AFSI as to why they must educate the public about the rise of anti-Semitism that is behind this "Snuff" Opera:


While the war is raging in Gaza and Israel, we mourn with heavy hearts the terrible loss of our beloved Israeli brethren. We also note the increased anti-Semitism throughout Europe. France, Germany, Ireland, and even England report vicious anti-Jewish demonstrations.


There are also alarming things happening at home. Word has reached us of ADL hiring Islamist terrorist sympathizers as camp counselors, indoctrinating our young children against Israel and America. We also know that the White House is filled with Muslim sympathizers and activists. All of this is tunneling into America's fabric in the most subtle, but dangerous ways. Just as the Israelis are being attacked through an incredible network of underground tunnels which were being built over the past decade, so is America in danger from the Muslim subterranean network being built around us.

The NYS Commission on Human Rights might be interested in the Met's violation of our rights with this opera. Their complaint line is: 212-306-7450.


Also, these protests might become moot issues if the unions working with the Met either strike or get locked out of the Opera House. July 31 is the decision day. We'll keep you posted.

SLIDESHOW of a few pictures:

July 21, 2014. Outside Metropolitan Opera Part 1. CBS Radio interview Richard Allen and Helen Freedman of AFSI during the demonstration against the Snuff Opera that avoids the obvious: Klinghoffer was MURDERED by Muslim Terrorists because he was Jewish. "Do we cry for Terrorists or their victims?" Zero Tolerance for Racist Anti-Semitism.

July 21, 2014. Outside Metropolitan Opera Part 2. RT media interviewed Helen Freedman of AFSI during the demonstration against the Snuff Opera that avoids the obvious: Klinghoffer was MURDERERD by Muslim Terrorists because he was Jewish. "Do we cry for Terrorists or their victims?" Zero Tolerance for Racist Anti-Semitism.


Heads up about another rally in support of Israel next Monday, July 28 -  NEW YORK STANDS WITH ISRAEL