(Scroll to bottom for videos)

The 2009 Muslim Day Parade went-off as planned. We never expected a little rain to stop them...and it didn't. However, attendance seemed small compared to previous years, even during the look-at-me-I'm-a-muslim prayers. 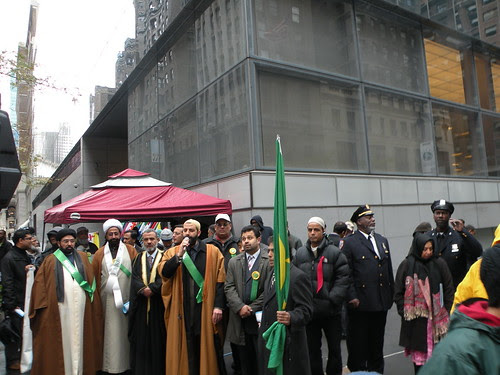 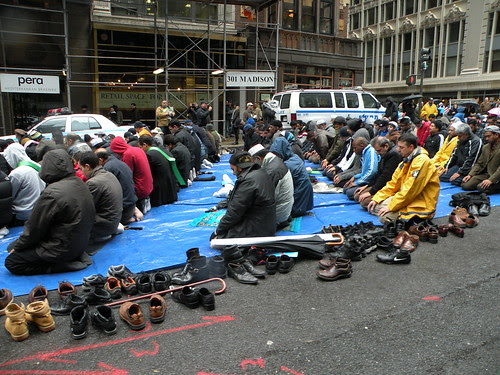 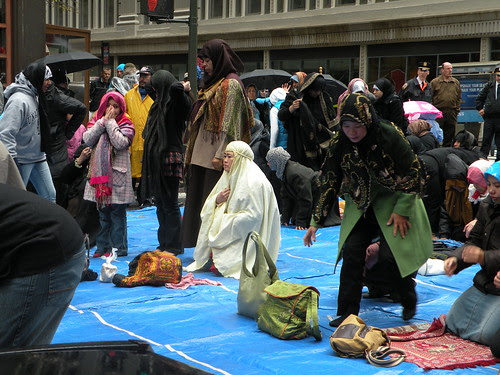 Was that rain related? Who knows, but after we took the usual pictures and video, we walked down to Madison Square with the parade (with NO crowds of parade watchers along the route...literally...NO parade-watchers, period!) 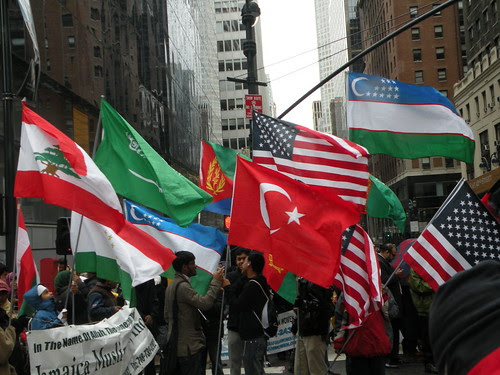 Imagined we see lots of food and craft vendors as in past years but there were noticeably fewer. 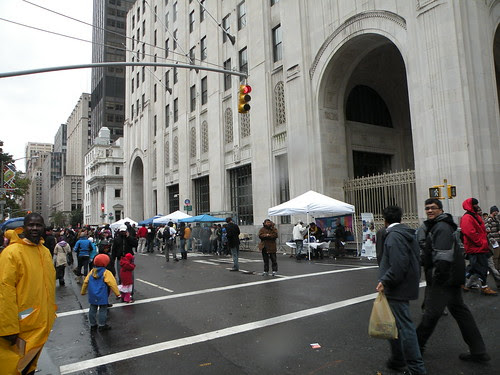 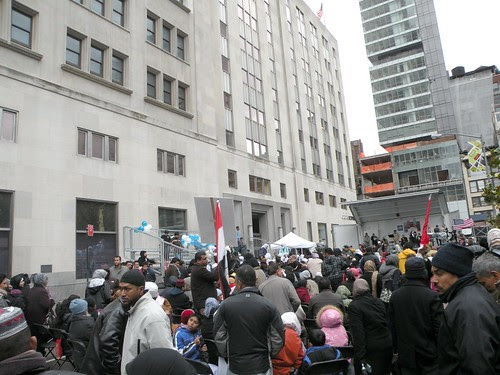 There was more Sunday in the Park with "Mo", of course... 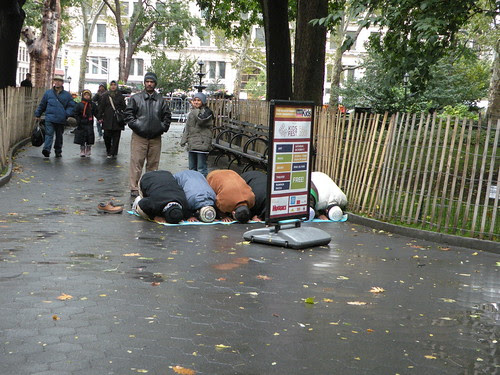 The police, though basically polite, were also confrontational. Without provocation on our part, apparently just because "we were there...." it would seem the Muslims felt a bunch of non-Muslim Americans taking pictures of their parade was of concern. They felt 'threatened"?! HELLO...it's a PARADE on Madison Avenue...what do you expect?! That no one lifts a camera and keeps on walking...? Don't look at the Muslims. Don't take their picture? The most ridiculous statement the officer made was, "We were taking too many pictures!!" Fortunately, First Amendment rights prevailed and we continued taking pictures, quietly, as we had been all along. 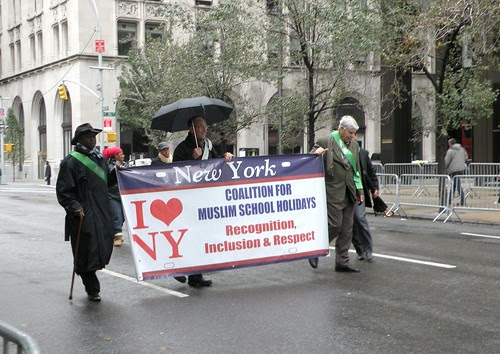 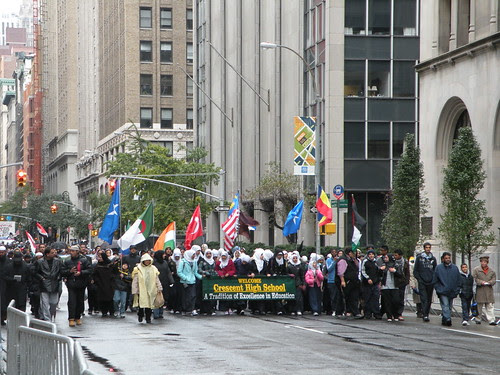 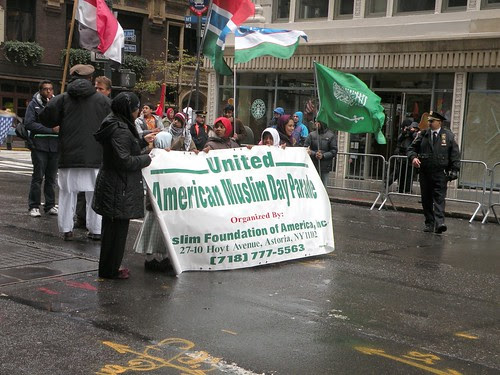 The final float seemed to be the Muslim Day Parade's Theme: "2010 Census, it's in OUR Hands." 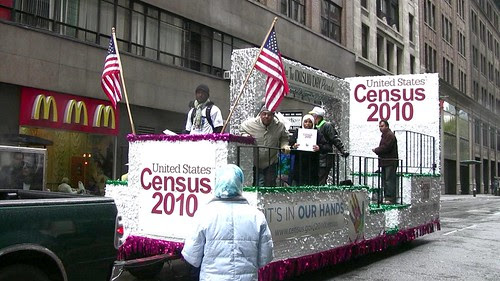 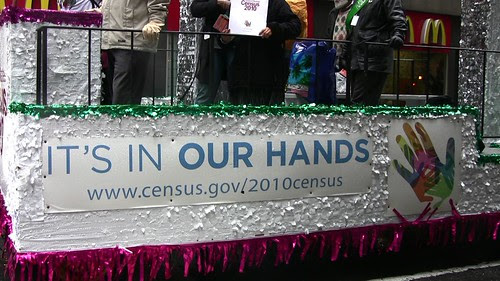 We felt a far more appropriate and meaningful theme should have been, "Remember and Never Forget the Victims of Sharia Honor Killings" 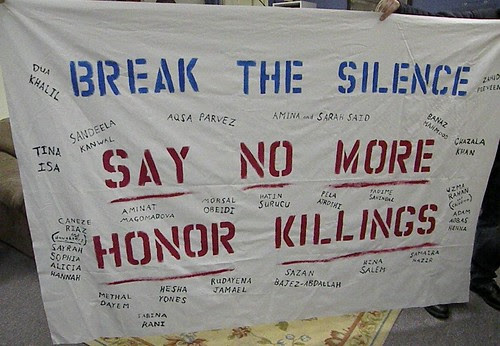 
UPDATE: That Crazy "Rabbi" strikes again. This video is a fabulous catch! Feinberg reveals himself again as a major BIGOT! And the police should be ashamed. All﻿ parades can be photographed and filmed EXCEPT the Muslim parade? Go figure...

Which aspect of Islam are they celebrating:
Honor killings?
Nine Eleven?
Taqquiya?
Jizya?
Public floggings of septuagenarians?
Beheadings of civilians?
Burning alive of Christians by Raila Odinga
That the occupier of Air Force One campaigned for his cousin Raila Odinga on the platform of "Change?
The hijacking of the White House?
The subversion of Britain through polygamy and mass reproduction at the British taxpayers' expense?
The murder of missionaries?
The torture and imprisonment of rape victims?
Koran sanctioned paedophilia?
"Stupid" Western Freedoms that allow them to abuse "Stupid" Western Freedoms?
Kidnapping of aid workers?
"Stupid" western governments ransoming aid workers?

It is amazing how they just drop and pray anywhere. Islam should of never been allowed to be practiced here in the first place.

Totally....have seen just one guy on occasion...drop his rug on a side street...pointed towards Mecca..
knowing what they intend...it's hardly a non-threatening moment...