A PRAYER SERVICE AND VIGIL for the kidnapped Israeli teenagers was held MONDAY JUNE 16TH at 12:30 P.M in front of ISRAELI CONSULATE (42nd St & 2nd Ave) in New York City.


The latest act of terror on Friday, June 13, 2014, was the kidnapping of three teenaged Yeshiva students, Eyal Yifrah, 19, from Elad; Naftali Frenkel, 16, from Nof Ayalon; and Gilad Sha’ar, 16, from Talmon;  kidnapped in Judea by “palestinian” terrorists. 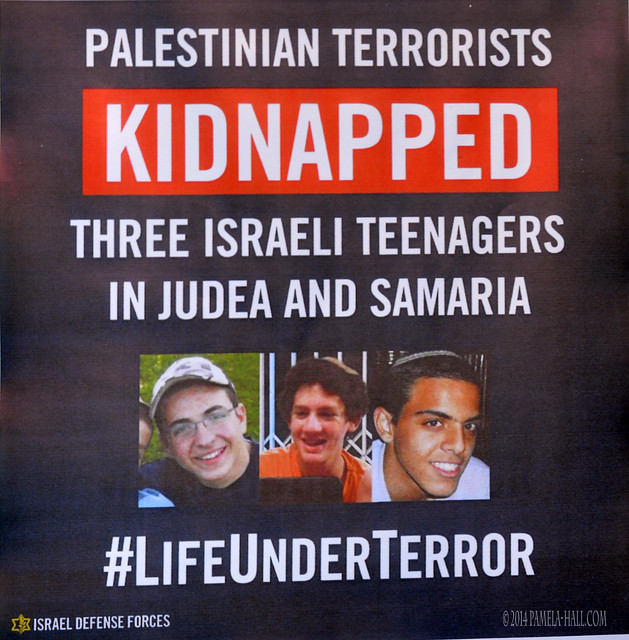 The people of Judea and Samaria, the citizens of Israel, are in grave danger from terrorism as anti-Jewish hostility grows bolder with each act of terrorism. 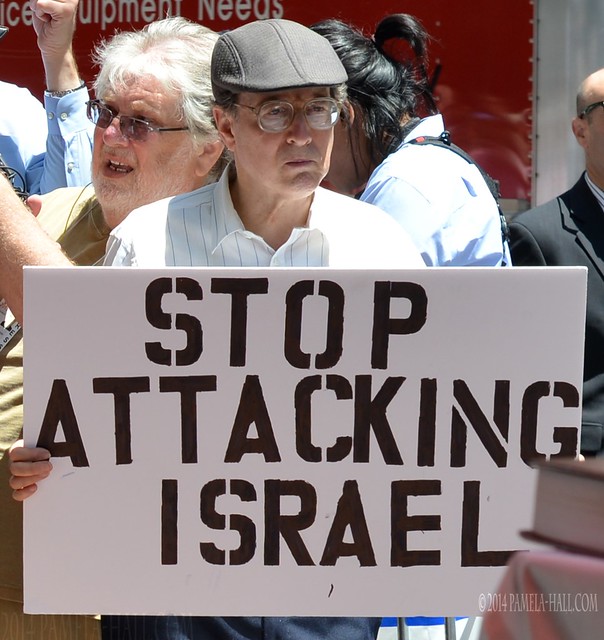 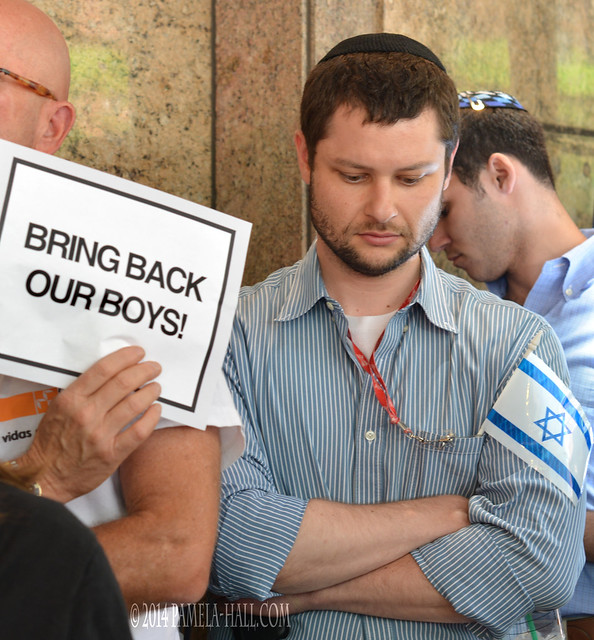 From AFSI (Americans For a Safe Israel)

The fact that the NY Times chimes in on this (blaming the victims) should be no surprise to us, but it is reprehensible. Subscribers should cancel their subscriptions ( to the NY Times) immediately, letting the Times know why they are doing so. The hatred is everywhere; we have to continue to do battle with it. 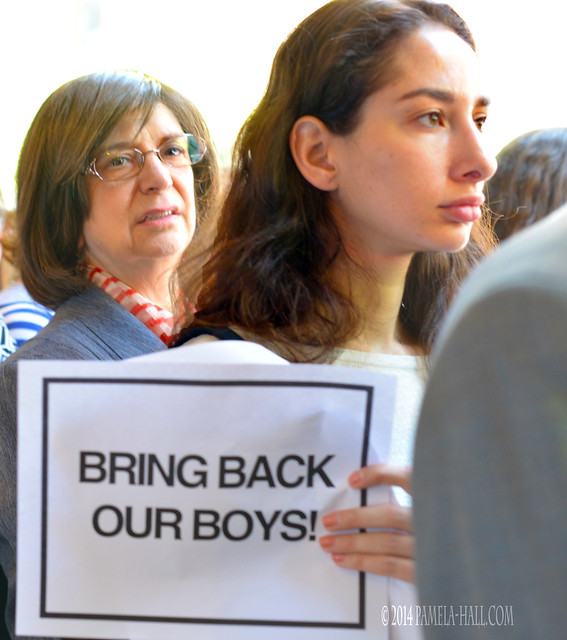 Israel is under attack. Europe. Kenya. The World from Muslim terrorists. Obama is no friend of Israel. Obama’s failed Foreign Policies have caused the Middle East to explode and European hostilities towards Jewish State and the Jewish people to accelerate.

“It’s not just this salute but the celebrations, the passing out of sweets, the dancing in the streets because three Jewish schoolboys were kidnapped by savages. Islamic Jew-hatred — it’s in the quran[1]. Scrubbing, whitewashing and avoiding reality is a recipe for more child kidnappings.”

The prayer vigil I attended on June 16th, outside the Israeli Consulate, had more media than usual; too often these rallies are ignored by the Main Stream press. Yes, I saw CNN and CBS in attendance (there were other cameras, too) and the coverage of the kidnapping-by-terrorists and prayer vigil  seemed the pull more attention than usual.


One speaker, an Israeli soldier, maimed in war but still on active-duty, lead a prayer. He is an inspiration for us all.


But, the story the press will deliver is endanger by the need for cover-up. Blaime the boys. The boys are responsible not the terrorists. Twisting the truth in to bald face lies.

The Fatah activists called for shopkeepers in the vicinity of the kidnapping to destroy any footage their security cameras filmed in the 24 hours following the operation to prevent the IDF from seizing the footage and using it in its efforts to locate the boys. That makes Fatah an accessory after the fact to the attack. And yes, that means that the PA – which is comprised of Fatah and Hamas – is in fact one great big terrorist organization.


Psalm 121, says that God “will guard you from all evil.” As long as these boys are held hostage, more vigils will be held. But, prayers can only do so much.

A slide show of a few pictures:

The American elite are playing catchup with their European counterparts.
Under the guiding hand but blind eye of Europe’s elites, over the past 20 years anti-Semitism has become endemic in the political systems of EU member states as well as in the EU bureaucracy. Jew hatred serves as the one sentiment that unites leftists, rightists and Muslims. And in Europe today, anti-Semitism doesn’t merely serve to justify Palestinian violence against Israelis. It also empowers Muslim Jew haters to believe that they can attack Jews violently with impunity on the streets of Europe.


ISRAEL must Fight Back. Fight to bring these boys HOME to their families.

Support the Civilized Man. Not the Savage. Support Israel!

Psalm 130 :
Israel, hope to the Lord, for kindness is with the Lord and much redemption is with Him.  And He will redeem Israel from all their iniquities.

May 17, 2014. The Union/Socialist/Marxist Machine and Teachers were joined by parents and  students, as well as a few school bus drivers, at NY's City Hall to protest Cuomo, Bloomberg, Charter Schools and the "Common Core" curricula.


"... to support a bill that would delay the administration of a standardized test aligned to the Common Core. Conservative lawmakers also sponsored a bill, co-written by the teachers union, that overturned a State Board of Education policy tying decisions about teacher licenses to student test scores."


Speeches and signs, however,  revealed a very un-Republican animus towards those "Evil Capitalists" on Wall Street,

Seems the Capitalists are to blame for our failed Public Education. 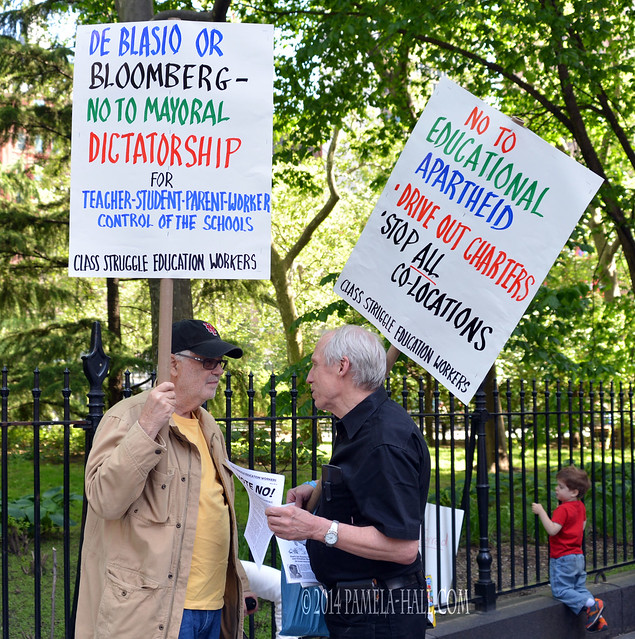 Communist, Democrats, Greenies, "Workers", Occupy... all sprung forth from the same piece of political and philosophical dung.... Droning on and on about Profits vs our Civil Rights. 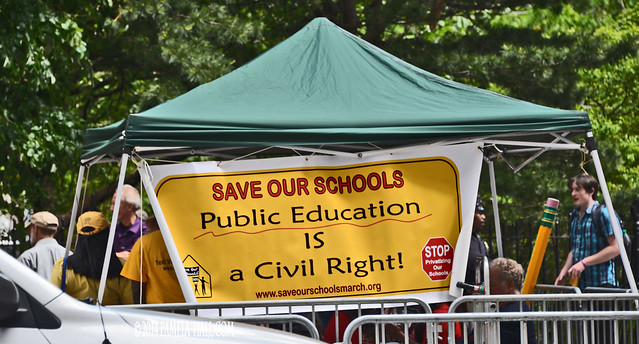 Taking Back OUR Schools Rally & March

"Progressives' and the Commie-fed 'Working Families Party' lead the mantras about "social injustice". Teachers and their unions raged on about 'inequality' ravaging our schools.
They claim it's only the rich white kids getting a quality education denied to kids-of-color. 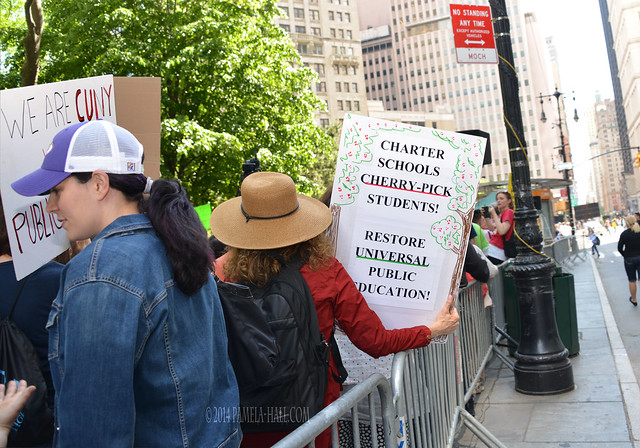 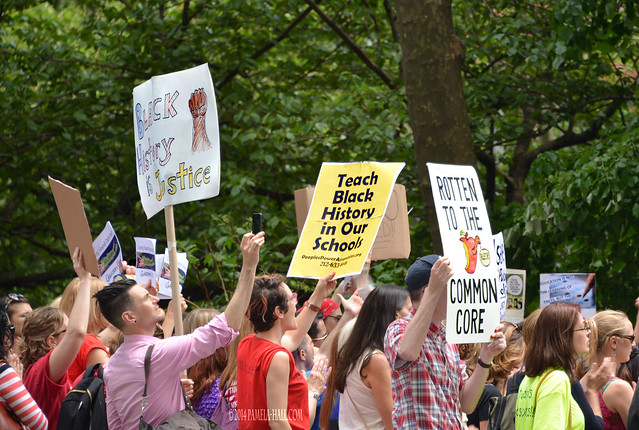 Money is Evil. Money is Racist. 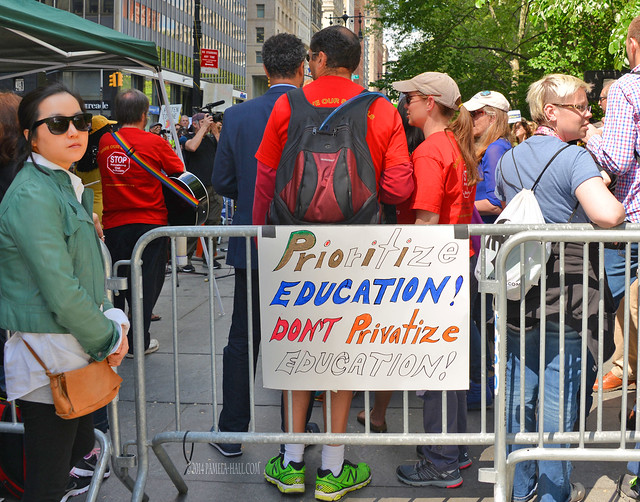 Profits trump a quality Education for the poor. 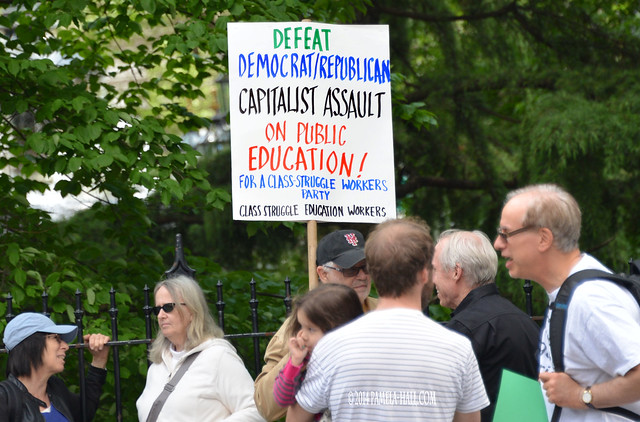 "There are too many WHITE teachers!" claims one speaker. 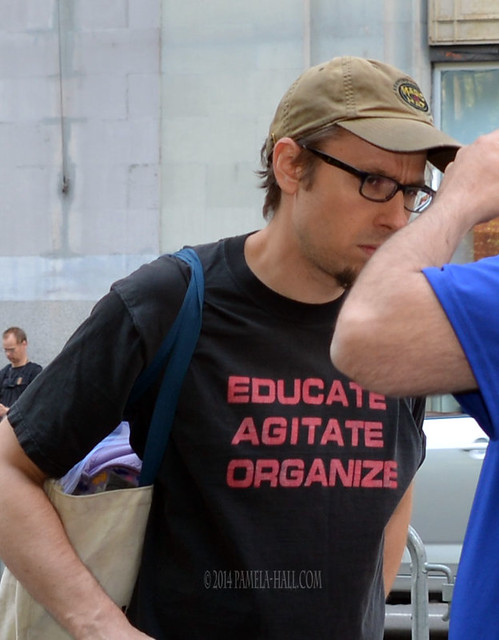 Embrace their self-imposed ignorance or else be banished; branded as a subversive Tea Party/Conservative Nut-Job. 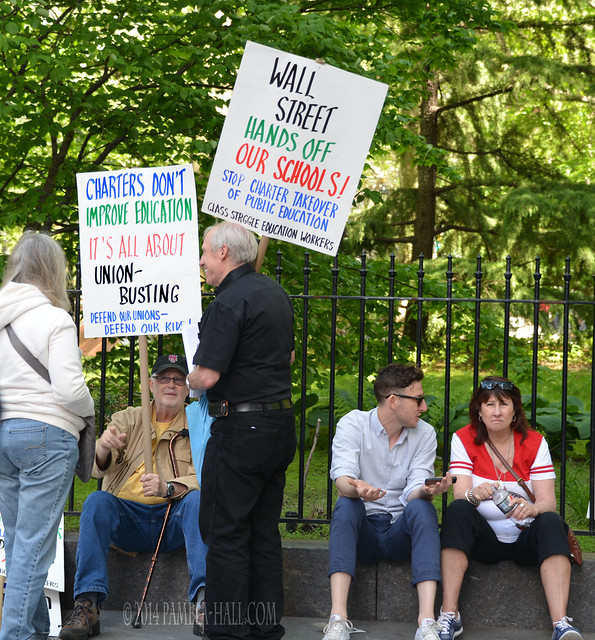 Re-education not education (for the media and the students). 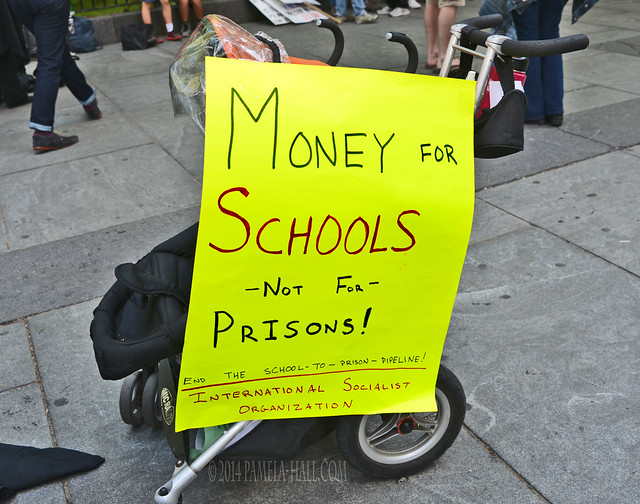 "The victim vs the master" meme enthralls the sycophant media. Challenge them and you will meet the Progressive's Evil Twin "Snidely" who is "evasive, un-intimidated and very disrespectful". 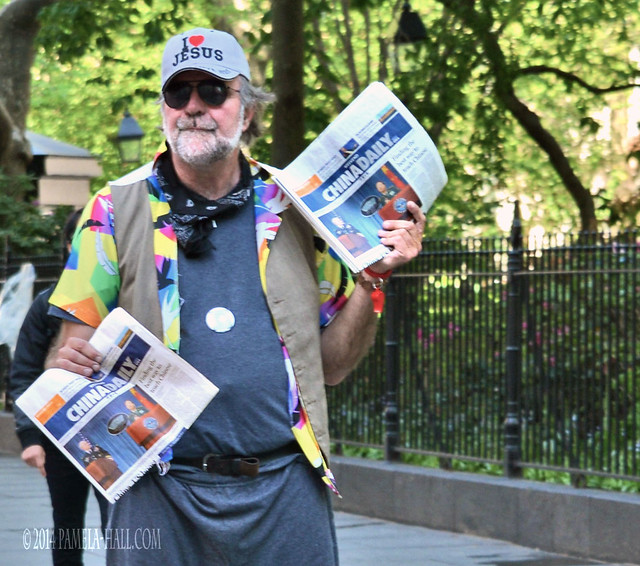 
Marx didn't like to belong to organizations he didn't control. And once within an organization, Marx tried to control literally everything it did.

Many Marxists (not just “left communists”) argue that Marxism, or communism, is not about state control and centralization. According to Marx it is.

In the extreme and all-encompassing level of this communist, centralization is thoroughly Stalinist (or Marxist!) in nature. 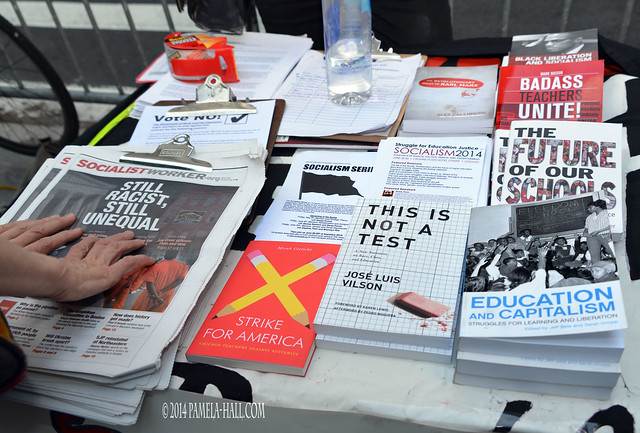 A list from The Principles of Communism (replicated in the Communist Manifesto) written by Engels in 1847; a list of what must occur in a communist society/state:

i) The abolition of private property.
ii) The central organization of wages for workers on the land and in factories.
iii) The nationalization of transport.
iv) Private banks were to be erased and superseded by centralized or state banks.
v) The state would own all factories, workshops, farms, etc.
vi) All education was to be centralized or state-controlled and funded by the state.

Slideshow:  Many of the signs protested Testing and Common Core.  No testing for students. NO testing to evaluate the teachers! Plus a  plethora of complaints straight from the Soc/Commie/Prog/Leftie playbook

Join us in ... seeking to create & sustain a public school system that provides a fully funded, equitable, community-based education for every child. This means that....decisions about our children’s schooling would be made democratically by families and professional educators, free of corporate and political intervention.

From the NY Times:

With tensions running high over issues surrounding academic benchmarks, standardized testing and performance evaluations for educators, an unlikely coalition of teachers, lawmakers and parents from the left and right banded together to push back against what they see as onerous changes in education policy. (many changes that the LEFT nurtured and enforced)


The kid makes a point : 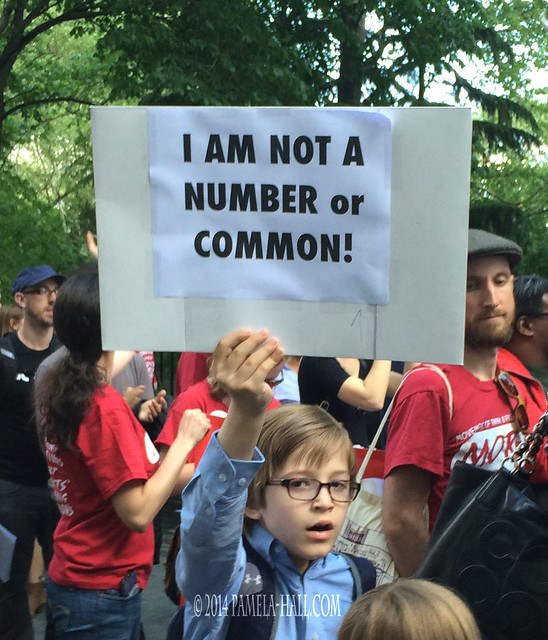 Excerpts from a few speakers:


VIDEO - Part 1 - In part one, the speaker was particularly pleased that there was a bill just passed by the Assembly Education Committee - a unanimous bipartisan vote - putting a two year delay on teacher evaluations. No teacher "Evals", no schools closed.


VIDEO - Part 2 - In Part Two, the speaker (a member of Black New Yorkers for Educational Excellence) focused on an education that has "Equity  with Excellence; Excellence with Equity for ALL students. A fundamental Human Right. Quality Education that is not possible in NYC without a Struggle for CHANGE.

They were not disappointed in the election of DeBlasio as Mayor of NYC, but are strongly opposed to Mayoral Control of the Public Schools. And they are very opposed to Charter Schools.

"Quality in Education goes Beyond Academics. Mayoral Control Must Go. We The People are NOT Represented. We the People must Rise Up. Parents Must Mobilize and Empower Themselves."
"Transform a curriculum that is Culturally Relevant. Mandatory Black Studies. Indigenous Studies. Cultural Studies from Pre-K thru High School will mean less likely disrespect and attacks because of Cultural Studies. The process in place now is inappropriate and unacceptable."


VIDEO - Part 3 -  In Part Three, the speaker was a black woman who introduced herself as a parent. She complains that "the NYC schools have become a pipeline in to our prisons. Too many of our students are being arrested in our schools where they are supposed to be learning. Our schools are not Prisons. Our children are not criminals."  She was an advocate for After-school Programs. Social Workers....

More on the opposition to Corporations and Testing:
VIDEO- Part 4- Special Ed teacher- In Part Four, a Special Ed teacher is speaking. She is a critic of High Stakes Testing on Students with Disabilities. "Creative, invested teachers have skills that cannot be tested or quantified. Dedicated Educators who have been deemed ineffective simply because they took on the challenge of teaching children who need the most support"

VIDEO  - Part 5 - In Part Five,  The speakers are from the  Badass Moms (and Teachers) Assoc. (there were two) one of whom spoke of her 15 seconds of fame when she confronted Gov. Christie. Caught the end of the first speaker, "Join hands Parents and Teachers. Never let Go til we get our class rooms back".

The second speaker, "I shocked myself when I confronted Gov. Christie."

She continues, "We have more power than we even recognize. We have a right to organize. We need to take back our schools. Our responsibility to act. Inform the decision makers that we will no longer sit by and let this happen.

We gave their brand of educational reform a chance. We will not allow an even more intense brand with racist (?unclear?) We demand change. Now we must create it.

.
What is the  'Badass Moms Association'

We oppose the Common Core State Standards, Teach for America, expansion of Charter Schools and the disinvestment in our public schools.

ACTIONS: re BAM "If it comes to a battle between the billionaires and the moms over the future of public education, I am betting on the moms!" Mark Naison, Founder
of Badass

No mention of ridding the schools of the incompetent educators. Corporations Bad. Unions Good.

"Rules that protect bad teachers from firing are common across the country... According to New York’s school boards association, the average proceeding to remove even one incompetent teacher extends for 830 days and costs taxpayers $313,000. So teachers are far more likely to be moved to failing schools than fired. And these schools tend to be filled with black and Latino kids. The problem entrenches itself as those teachers stay in the system longer, where they are then protected by seniority. Not only does this keep a failing teacher in the classroom, but it makes it impossible for schools to hire new, more effective teachers."

++
Then there was the Kumbaya moment and it was time to vacate the premises.


VIDEO - Part 6- UNIONS LOVE SINGING - In Part Six, the singer gave this intro before leading the crowd in song:  "What a Crowd! Give your self a big Hand!" He continues, "Democrat Representatives in Trenton said we're having a real tough time. You gotta get the people out there singing and screamin' and tellin' what's wrong with the schools." (next a Woody Guthrie song)

"This school is your school. This school is my school. From Philadelphia to the New York Island. From the Jersey classrooms to Chicago City. These schools were made for you and me"

Background on the participants:

BTW- within a week of the rally... Cuomo accepted the endorsement of the Working Families Party.... All was forgiven...

Posted by Red Squirrel (Pamela Hall) at 2:11 PM No comments: